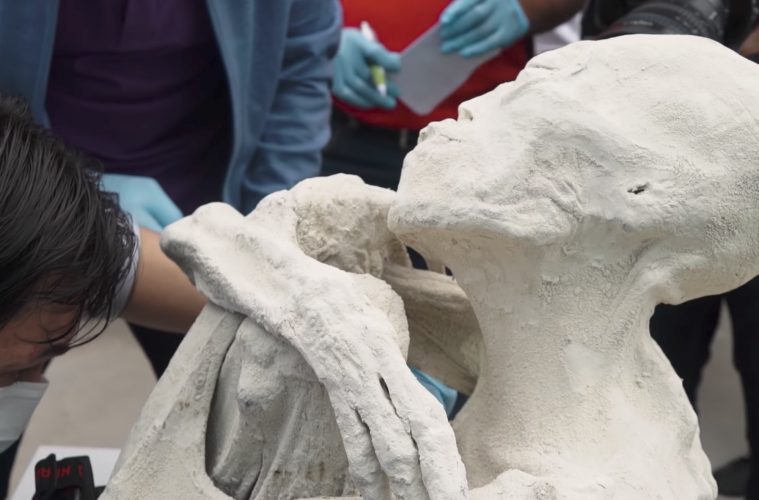 Update: I’ve been warned that this story may be a hoax, so I’ll investigate further. More on the red flags here. Meanwhile, take it with a grain of salt.

The title begs the question, is this a primitive human with deformities or simply more evidence of extraterrestrials visiting Earth?

It’s definitely time to move past the idea that some of these “UFOs,” which are commonly sighted and simultaneously tracked on radar, are part of an extraterrestrial conspiracy theory.

In what is proving to be an incredible new discovery, mummies dating back 1800 – 1900 years old from Nazca, Peru are shedding light on what our true origins may look like – or even simply re-writing what we thought was earth’s true history.

Due to the verified age of these specimens, we do know we are not dealing with fakes or a hoax here, it is important to get that fact out of the way quite quickly. 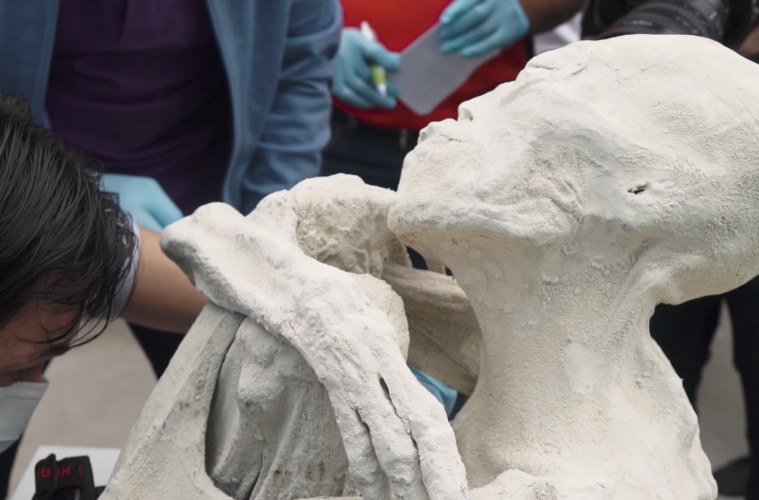 Update: We are currently looking into several factors here

1. Obtaining the carbon dating evidence (scans and x rays already available).
2. Whether GAIA knows more or how authentic this piece truly is.
3. When next opportunity for independent testing is.
4. Further results of early DNA testing. So far it is said to be female based on DNA.

Gaia.com recently released information regarding the discovery of these mummified bodies.

They have three fingers and it looks unlike anything we’ve ever seen before.

Gaia has teamed up with a number of researchers and scientists to determine the origins of the specimen.

The story came to them from well-known and well-respected investigative journalist Jaime Maussan, who is calling this “one of the most important discoveries of the 21st century.”

“We have a very important mission here in Peru. I came here because of this group of scientists, professionals, [and] journalists.”

When they brought out the body and “pulled it out of the box, it was a stunned silence at first.”

What’s also very intriguing is the fact that it was discovered near the Nazca Lines, a series of huge ancient geoglyphs in Southern Peru’s Nazca Desert.

Author Graham Hancock describes his experience in one of his books, Fingerprints of the Gods:

Below us now there’s a pair of parallel lines, almost two miles long, arrow straight all the way to vanishing point.

And there, off to the right, a series of abstract shapes on a scale so vast – and yet so precisely executed – that it seems inconceivable they could have been the work of men.

The people around here say that they were not the work of men, but of demigods, the Viracochas, who also left their fingerprints elsewhere in the Andean region many thousands of years ago.

So far it seems that “initial examinations suggest the possibility of a species unlike anything found in the fossil record.”

We now have scientists examining the physical evidence associated with this phenomenon, and hundreds of high ranking military/ political personnel, as well as academics, testifying every single year urging the public to seriously consider the evidence available.

There is so much to be known about our world, and it’s unfortunate that, for a very long time, a small group of people and the handful of corporations they run have controlled the information we have access to.

Rarely are people willing to go beyond, do their own research, examine multiple sources, and think for themselves.

If one were to do so with the UFO/extraterrestrial topic, they would have a hard time refuting the evidence.

This is why, instead of simply discussing UFOs and their possible extraterrestrial origin, and all of the questions such a discussion brings up, we must examine other forms of evidence, or possible forms of evidence, that surface, without ridicule, but rather, critical examination.

“There are objects in our atmosphere which are technically miles in advance of anything we can deploy, that we have no means of stopping them coming here … [and] that there is a serious possibility that we are being visited and have been visited for many years by people from outer space, from other civilizations.

“That it behooves us, in case some of these people in the future or now should turn hostile, to find out who they are, where they come from, and what they want.

“This should be the subject of rigorous scientific investigation and not the subject of ‘rubishing’ by tabloid newspapers.” – Lord Admiral Hill-Norton, Former Chief of Defence Staff, 5 Star Admiral of the Royal Navy, Chairman of the NATO Military Committee (source)

“Behind the scenes, high ranking Air Force officers are soberly concerned about UFOs. But through official secrecy and ridicule, many citizens are led to believe the unknown flying objects are nonsense.” – Former head of CIA Roscoe Hillenkoetter, 1960 (source)

The quote above is simply referring to UFOs, and with witness testimony, it’s an educated assumption to say the same for any potential physical or biological evidence of an actual being.

Personally, I believe there is a great deal of evidence, just as there was for “UFOs” before they left the conspiracy realm.

Remember, “condemnation without investigation is the height of ignorance.”