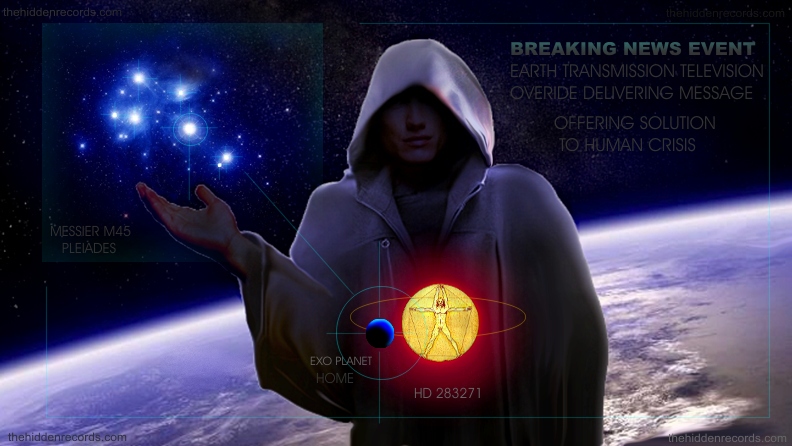 Ancient Starmaps Decoded: THIS is the Home Planet of the Gods that Created Mankind

This is the final chapter of Wayne Herschel’s human origin theory, which started 15 years ago with the publishing of “The Hidden Records: The Star of the Gods.”

In short, Wayne Herschel was able to identify numerous ancient sites all across the planet (and one on Mars) which are copies of the Pleiades start cluster.

Even more important was the discovery of a nearby star system, Sol 1, which Wayne has identified as the focal point of worship in all ancient (and modern) religions. It was never our sun!

Sol 1 is the famous “Star of the Gods” and, according to Wayne Herschel’s discoveries, it is orbited by a planet from where mankind’s ancient gods have come to Earth to seed it with life. 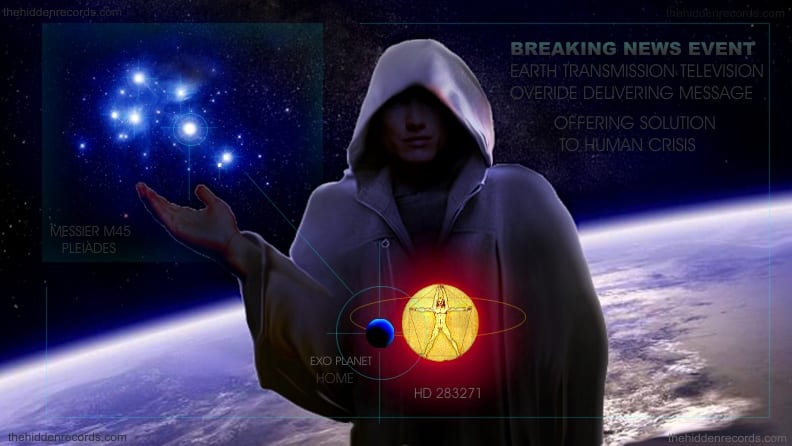 I believe you have all been lied to. I think historically the lies and cover ups and hidden records are intentionally motivated.

The con of man under elite control reigns right up to this day. You are now going to discover the motives and what was covered up.

Almost all megalithic grand civilisations claimed to worship ‘gods’ in celestial ships, a cosmic bull and a Sun and a unique sickle shape crescent.

The meaning of this has been hidden and it is a key factor in the records of history.

It was NEVER EVER our Sun being revered, it was clearly shown in so many repeating cases that it was another Sun, a Sun-like star with its crescent exoplanet.

They all appear to revere human origins from ships that came from the exoplanet in the area of the cosmic bull in Taurus.

Historical monarchy law was tough worldwide on separating works on daily worldly matters from works on belief based claims which founded religions.

Both topics were under extreme strict laws to ensure that they do not merge. Once religions were established they put an end to any new claims on holy matters because they were easily smeared and deemed work of the devil.

From here forward the elite literally capped the paranormal subject for the reasons you are now going to be able to reason.

Paranormal records set the foundation for the belief that you were born into and were not to be questioned or you would pay a horrific price.

Should you still trust this old primitive elite system? Was it the best intention of the leaders in these epochs to look after their people’s ways to find truth and knowledge?

Or was the protocol more in favour of the best interests of wealth of the family of the crown in each land that had been achieved through their plundering wars?

This control over humanity is still rife, and it is more serious because the ‘super rich’ over time seem to have forced their way in as money can buy literally anything.

What follows is the reasoning to answer why this is causing a global crisis like never seen before.

Research in this forbidden history of ancient star maps and monument correlations that reveals an earth shattering alien-human origin theory is the subject I published work on 15 years ago.

The image below shows just 9 cases identifying the primary Sun star solar system of our ancestors.

There are 35 strong cases of the repeating ‘alien’ star maps showing that there are three Sun star targets identified in this area. It answers the mystery of the solar trinity legend.

Clues to the meaning of these alien maps are found at most of the megalithic civilisations. (Click here for the list ref.) 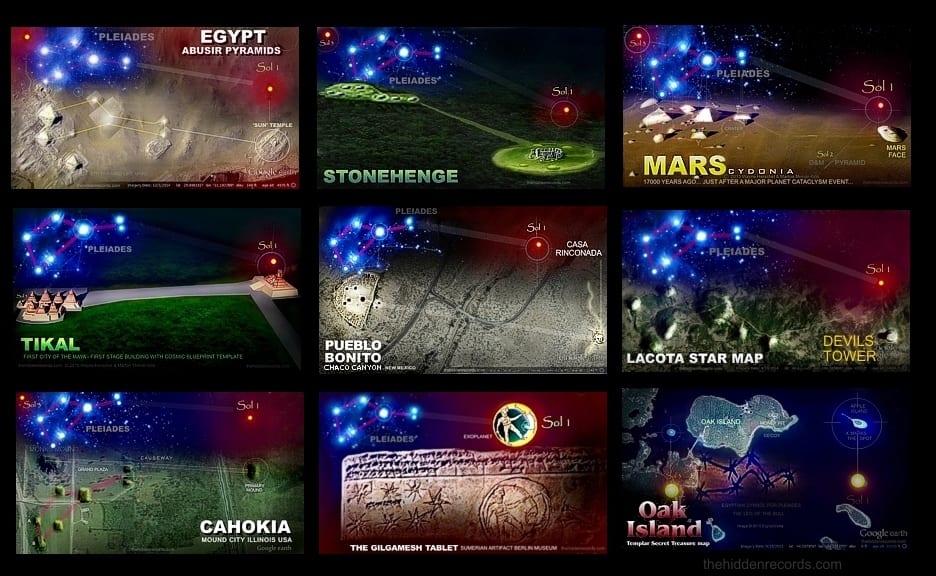 The sensitive material in this subject and the written in stone detail that exposes a very obvious cover up is a risky journey.

Views expressed against people in powerful positions and what was covered up has caused a lot of interference in my life.

Freedom of speech laws are also changing very fast indeed including laws to protect those who want this covered up.

Therefore there are absolutely no intentional direct allegations made towards any individual or group as this work is presented as ‘theory’.

The article has many repeating theme patterns presented and compared showing each theme is not a one off chance.

Due to this nature of repeating patterns the reader will feel a strong sense of repetitive content style. This could not be avoided.

THE STAR GATE DISCOVERY HAS TIES TO THE HUMAN SPIRIT, TREE OF LIFE & PROPHECY

Now that my work defines how the ‘God’ Creational source with plasma ribbon physics is used by the advanced devices depicted, a whole new angle needs to be included.

There is a connection where ancient paranormal mysteries reveal a Universal Creation force. But importantly how the devices seem to ride/use/traverse literally the plasma ribbon ‘hand of God’ with actual ‘star gates’.

The subject of religion and prophecy and current world timeline events now carry huge connection to the meaning of what is about to be revealed.

This subject ties to the basis of the star maps so it is critically important that this subject has a solid mindset introduction.

It seems many different famous prophecy sources have seen this development and I will show why it is timed for now.

Finally, I must appologise in advance with my status change, now that I am handing the activity of the truth quest to a dynamic team, as they will now target more fund raising and advertising in this article.

I have always been against this sort of tactic all along in this journey, but they say this is the only way for the project to survive and move forward.

RELIGIOUS DISCOMFORT FOR SOME

The contents will however more than before cover very sensitive religious material.

Some of it unveils and identifies a questionable element that reasons how religions all evolved to tell completely opposing doctrines from one original solid truth.

Some content will however uphold most of the common grounds of all religion with some uplifting surprises that you can add to your firm belief.

There will be better reasoning and logic for all aspects of religion never seen before if you are a seeker of more truth.

Especially learning the keys to unlocking those portions of it that are encoded.

For those of you who are very religious and cherrish your gift of life and more to follow the high morality, peaceful living and love and respect values of your religion then feel proud and stand strong.

The world needs more like you. Please just consider this article for its theoretical value.

This article is very important, especially to those who feel physically and spiritually lost.

Or those struggling to find the meaning of life, the implications of current world developments or just seeking uplifting lost knowledge.

The release of the final pieces of an earth-shattering monumental puzzle is finally here.

A solid claim has now evolved merging SEVEN of my greatest discoveries into one special article that is presented here. See the Seven chapter headings below.

Some of the new breakthroughs many will agree are my strongest material ever released.

The updated conclusions made on all seven breakthroughs will elevate both my ‘Solar Trinity’ star visitor human origins theory and my Pleiades and Orion ancient star map theories onto solid ground. 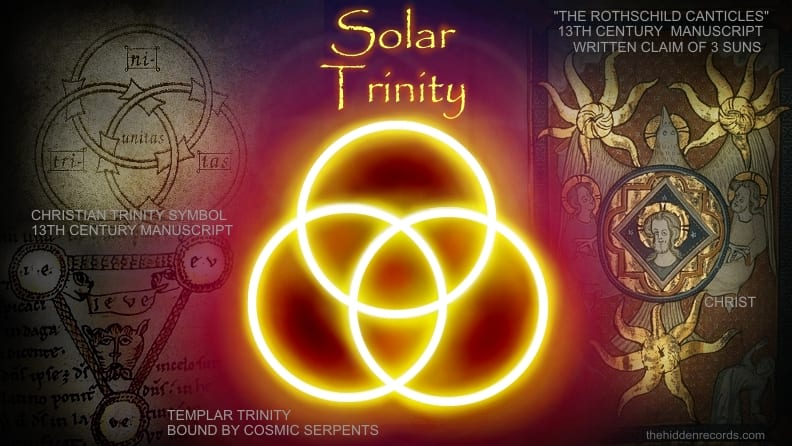 I coined this ‘Solar Trinity’ definition in 2002 after realising the Biblical Trinity completely hijacked something much older.

Namely the lost knowledge of the records of three Suns of the ‘gods’ found in both Egypt and Sumer.

I have a full article dedicated to the origins and how the holy Grail itself celebrated the same lost truth. Ref.

You can see in the shadows to the left of the 3 intersecting circles which is the official historical ‘Trinity’ symbol.

Note the three orbs as a very clear hint they are actual round heavenly bodies as one. The historical Rothschilds family seem to have purchased an illuminated manuscript on it too.

It is now officially named The Rothschild Canticles which is now online referenced in a special article Ref.

The highlight discovery of this new release is without doubt cracking the clear message of the Biblical Alpha Omega ‘code of God’ at the end of the article.

The heavenly gate is revealed in records on the Christ story and in an Aztec codex released recently by the Vatican!

Once I knew the secret symbol for the star gate, it set off a snowball effect from one finding to the next.

My latest discoveries are presented here but I also add some of my older groundbreaking findings too as they suddenly show more as we weave together the old and the new.

FACT: The premise of my research is that:

However, scholars just shrug their shoulders and say “Coincidence”!

My star map theory proves why almost all the megalithic grand beginning ancient civilisations all obsessed in the cosmic bull.

The best example decoding what bull worship was once about is found in one recently discovered mural that was not destroyed like all the others.

Márton Molnár-Göb must be credited here for part of this star map detail identifying the 3 Suns. It reveals the version of Roman bull veneration called Mithrism. Ref.

The heavenly deity that flies and who is behind the cosmic bull’s neck (where the star map is found) is Mithrus.

He is severing the bull’s leg (symbol for Pleiades) and setting it free in the heavens where it came to rest behind the bull’s neck in legend.

He is clad in red cape and blue body suit and I think he is the inspiring origin of the choice of a very interesting modern created story. That of the modern fictional hero ‘Superman’.

The mural is from the recently uncovered temple of Mitreo Barberini found in Rome. Ref.

The veil or cloak is the doorway to the heavens and the Pleiades are seen through the cloak window.

The 3 Suns are present as well in correct orientation as seen on the horizon when they rise. We will explore this cosmic doorway in great detail. 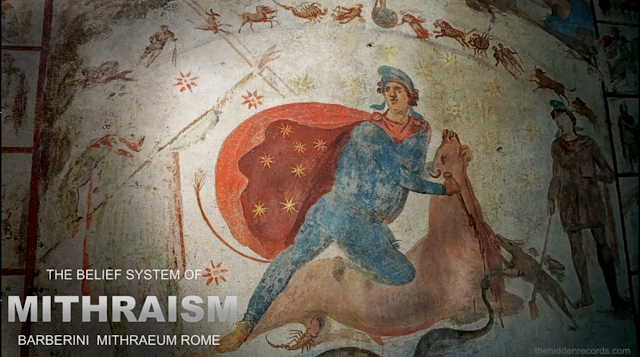 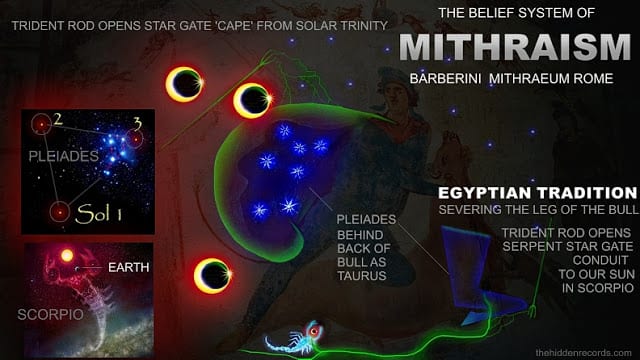 Note there is also the clue to the deity arrival here in our solar system. It suggests literally seeding our earth with human life that came from the area of the cosmic bull.

Hence involving the teaching of seeding life from the bull and the male part of the bull.

We have the cosmic address with the bull, 3 Suns and Pleiades and a destination.

Traversing down a serpent conduit from the bull’s leg (Pleiades symbol) to our Sun system which we will prove resides in between the pincers of Scorpio when viewed from the Pleiades area.

Notice also a man with a trident rod literally ‘opening’ the star gate. 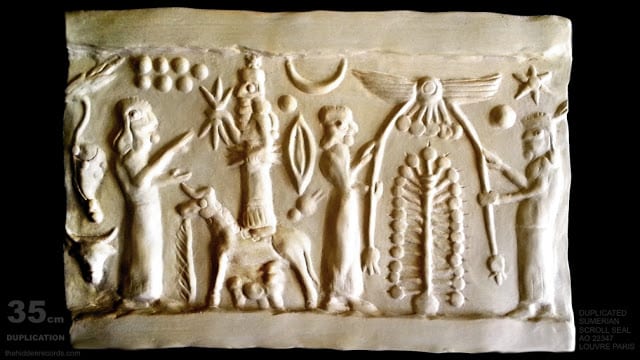 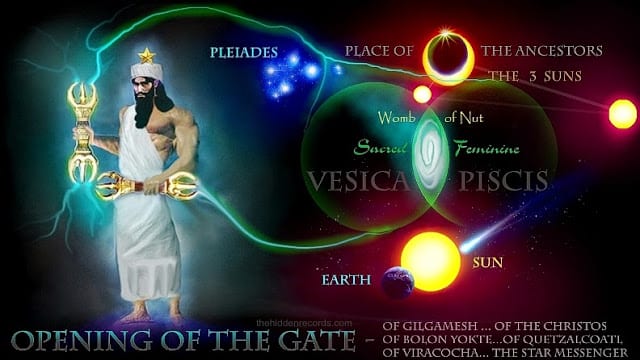 Please support Wayne’s hard work by pre-ordering his new eBook, as well as his first book, The Hidden Records: The Star of the Gods (also available on Amazon.com).

Please make sure to also check out the “Ancient Alien Artifact Replicas.”

His work needs both recognition and support. Thank you!

Copyright: If you want to reshare this article, please make sure to give proper credit and keep ALL in-article links intact.