As the Catholic Church battles to stem their continuing exposure of clerical pedophilia, detectives have uncovered an “unprecedented” amount of child pornography including images, videos and other explicit content discovered within the walls of the Vatican.

The Vatican Promotor of Justice, Gian Piero Milano, released a report in response to the allegations which he read in full to Catholic Church officials during a judicial ceremony.

Due to the Catholic Church’s internal investigations protocol, Milano claims he is under no legal obligation to actually name names of people accused of pedophilia and possessing child pornography.

However, Federico Lombardi, spokesman for the Holy See, showed a rare display of openness and named Archbishop Josef Wesolowski as one of the accused that had triggered the investigation.

Although this may seem like a forthcoming gesture by the Vatican, reports of Wesolowski not only possessing more than 100,000 images and videos of children being forced into sex acts but also of him sexually abusing multiple children in Poland and the Dominican Republic have already previously been exposed in 2014.

Due to the Vatican’s internal policies, Wesolowski was investigated but escaped jail for “his own protection”.

In an unusual move by the church, the high-ranking Catholic official was facing trial from the Vatican’s prosecution for his crimes and had been placed under “protective” house arrest, but mysteriously died before the case even reached a “courtroom”. 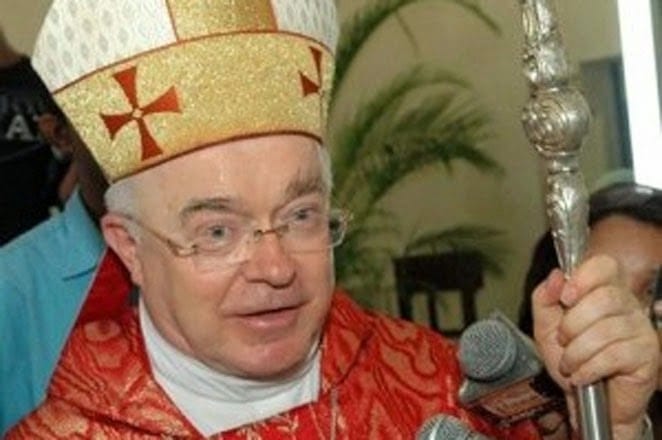 Archbishop Josef Wesolowski died while living in the Vatican under house arrest.
He was never prosecuted for his crimes.

The lack of justice following his death left many of his victims frustrated with suggestions that the only reason for the house arrest is the fact that word got out that he was allowed to roam free after he was quietly whisked away from the Dominican Republic and back to the Catholic city-state by Vatican officials in order to avoid prosecution there.

According to Church and State, the descriptions of what was actually found on Wesolowski’s computer were more than a little stomach-churning:

In addition, the boys were raped and forced to perform sex acts on adults, as well.

In addition to the images and videos present on the computer, at least 45,000 others had already been deleted.

According to the Guardian, beyond the child pornography cases, Vatican authorities are battling an array of crimes including drug trafficking and money laundering.

Three drug deliveries addressed to the Vatican were intercepted in 2014, including a packet containing cocaine-filled condoms.

The drugs were discovered at Germany’s Leipzig airport and handed to the Vatican in the hope of ensnaring the buyer, but no one came forward to claim the package.

Pedophilia and the Catholic Church Go Hand in Hand: