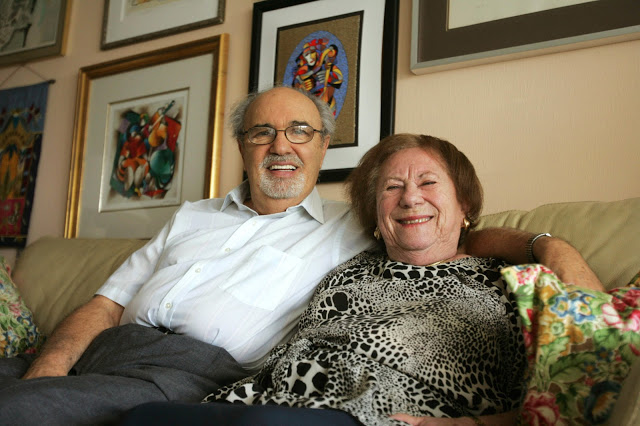 The first curse on mankind was imposed because of an apple, and for all that happened to Herman Rosenblat in his 85 years — the horrors inflicted in Nazi concentration camps, the gunshot wound he suffered when his Brooklyn television repair shop was robbed, the global fame bestowed by two appearances on “The Oprah Winfrey Show” — it is an apple for which he will be most remembered. That first bite of the fruit was built on a lie.

Mr. Rosenblat, who died on Feb. 5 at a hospital in Aventura, Fla., wrote a moving but largely unexceptional Holocaust memoir in 1993.

What distinguished it was one scene: a momentary encounter in a snow-dappled field in Germany between a starving teenage inmate at Schlieben, a subcamp of Buchenwald, and a young girl watching him from the other side of a barbed wire fence.

According to his own story, as recounted in another book: 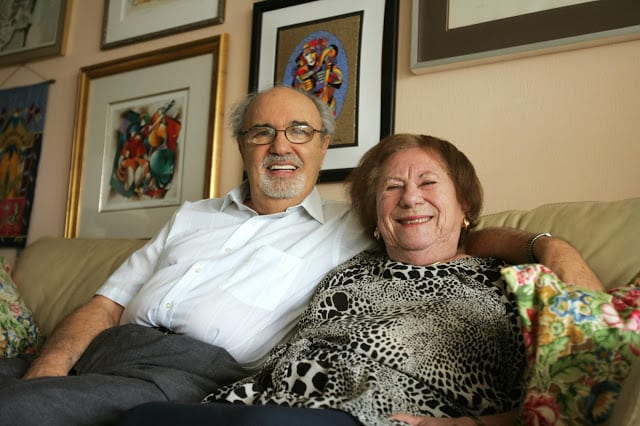 Herman Rosenblat in 2008 with his wife, Roma. His telling of their first meeting,
during World War II, was exposed as a hoax. J. Pat Carter/Associated Press

“He saw her pull something from her pocket. An apple? She squinted, gauging the distance between them, swung her arm in a few practice throws, then hurled the apple with a force that surprised him.

“The fruit flew across most of the distance between them before it dropped to the ground, rolled under the fence and landed just inches beyond the wire on Herman’s side.”

Twelve years later, he recognized that same young girl as the woman with whom he was on a blind date in Coney Island, after she recounted her version of the story.

“‘That boy was me,’ Herman said,” Penelope J. Holt wrote in “The Apple,” “and he smiled at the beautiful angel by his side.”

This Holocaust story had a happy ending. The couple wed and remained married for more than 56 years. Except that the story, as Herman Rosenblat told it, was not true.

After appearing on “Oprah” in 2007 and presenting Roma Radzicki Rosenblat, the woman he met on the blind date in Coney Island, with a ring from J. C. Penney to mark their 50th wedding anniversary, Mr. Rosenblatt acknowledged:

“The reality was that I wasn’t telling the truth, because she didn’t throw the apple to me, but in my mind I believed she did.”

His “Angel at the Fence,” which Berkley Books was to publish on Valentine’s Day in 2009, was never released.

A feature film inspired by the book was also scrubbed. What Ms. Winfrey had hailed as “the single greatest love story” she had ever heard proved instead to have been a hoax.

Mr. Rosenblat died at 85 after undergoing heart surgery, his son, Kenneth, said. Besides his son and his wife, he is survived by a daughter, Renee Enea, and three grandchildren.

He was born on Sept. 23, 1929, in Poland, where his parents ran a store. Much of the memoir of his family’s frightful persecution by the Nazi invaders may have been true.

His father died of typhus. When he was 12, Herman and his siblings were herded into ghettos and camps where he and his three brothers managed to stay together for six years. His mother was separated for “processing” and apparently killed.

He said he moved to America in 1950, and seven years later he did meet Roma on a blind date.

He later explained that he had written his memoir because, while he was hospitalized for the gunshot wound he suffered in the 1992 robbery, “my mother came to me in a dream and said that I must tell my story so that my grandchildren would know of our survival from the Holocaust.”

But what led him to embellish the story is anybody’s guess. In 1995, he submitted an abridged version to a New York Post love-story contest.

It was also featured in “Chicken Soup for the Soul” and stirred Ms. Winfrey, the film producer Harris Salomon and the literary agent Andrea Hurst.

Mr. Rosenblat received a book advance of about $50,000 and about $100,000 more for the film rights (neither of which, apparently, was ever returned).

He even accompanied Mr. Salomon to Auschwitz, where he not only re-enacted the apple-tossing encounter on camera but further embroidered his account, this time recalling that the young girl returned “every day” to deliver more apples.

But after Holocaust scholars, several infuriated relatives and a reporter for The New Republic concluded that the story had been concocted, Mr. Rosenblat admitted that the apple was in his mind’s eye.

Ms. Winfrey said she was “disappointed.” His collaborators said they had been duped.

“I wanted to bring happiness to people, to remind them not to hate but to love and tolerate all people,” he said.

“I brought good feelings to a lot of people and I brought hope to many. My motivation was to make good in this world. In my dreams, Roma will always throw me an apple, but I now know it is only a dream.”

In Ms. Holt’s 2009 book, “The Apple: Based on the Herman Rosenblat Holocaust Memoir,” in which certain incidents were fictionalized, he is quoted as saying:

“When I met Roma, after the war, she told me that one time she had thrown an apple to a little Jewish boy, and I thought that this could have been me. I wanted it to be me.”

“He cemented Roma into a corner of his gruesome survivor account and honored her with the love story that she deserved,” Ms. Holt wrote.

In fact, during the war Roma and her family, who were Jewish, were passing as Roman Catholics, living with a Polish family 200 miles away. She had never tossed an apple to anyone.

“I don’t know why he lied, but if you can’t trust a Holocaust survivor, who can you trust?” Mr. Salomon said in an interview, suggesting that Mr. Rosenblat’s motivation was less likely money than vanity and that, for whatever reason, most of his immediate family was complicit.

“Herman liked being in the limelight. He also needed a hook, something to separate his Holocaust story from all the others.”

He had told his story so many times that perhaps he had even persuaded himself that the woman he married was the same young girl he imagined had salved the hunger of a starving teenager across the barbed wire barricade of a concentration camp.

“In my imagination, in my mind, I believed it,” he told “Good Morning America.” “Even now, I believe it, that she was there and she threw the apple to me.”

Alexander: Unfortunately, this case is not singular. Joseph Hirt, a Pennsylvania man who claimed for years to have escaped from Auschwitz, confessed recently that he had fabricated the entire story.

Also, a recent scientific analysis of the manuscript purported to be the original diary of Anne Frank, a Jewish girl who died in a German concentration camp during the Second World War, has revealed that the manuscript could not have been written before 1951, six years after the end of the war.