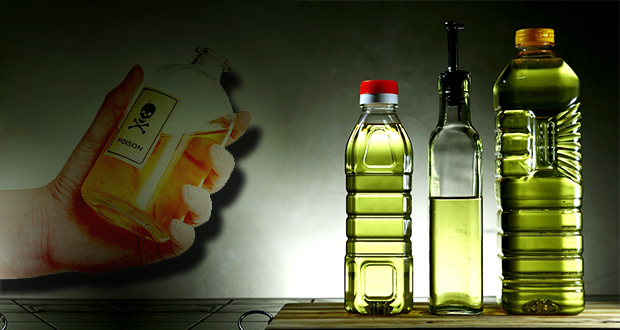 Why This Common Cooking Oil is a Cancer Nightmare

In 1956, a major cooking oil company published a series of magazine advertisements claiming that “fried foods become light foods” when vegetable oil is used in place of butter or lard.

The clear message to health-savvy homemakers was that vegetable oil was a low-calorie solution to the more traditional fats they were cooking with.

Millions of well-meaning cooks took the bait and made the switch, thinking their families would be better off as a result. 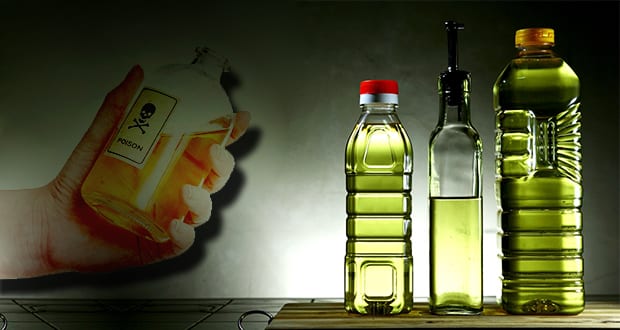 Marketers are still claiming that they’re better for human health than animal fats because they contain no cholesterol and aren’t saturated.

But what does the latest science have to say about this vegetable oil madness?

In a nutshell: all that “golden goodness” being dumped into deep fryers, drizzled on salads, and poured into frying pans isn’t exactly the health boon that industrial processors have long claimed it is.

So-called “heart healthy” cooking oils (i.e. soy, canola oil (rapeseed), cottonseed, sunflower, and corn) just so happen to be among the leading causes of heart disease and cancer in America today. Most consumers have no idea that they’re being duped.

History of this Cooking Oil Exposes it as Toxic Waste

The chemical industry and popular media have long hyped vegetable oil as the “healthy” choice for dietary fat. This is primarily because it’s cheap to produce and generates sizeable revenues for the corporations that make it.

The alleged health benefits of vegetable oil as a cooking oil are minimal at best. And after more than 100 years of use in the food supply we are now seeing the dire consequences of this deception − rampant chronic disease.

The origins of vegetable oil and how it came to be the standard fat used in American food preparation are disturbing, to say the least.

According to the critically acclaimed book The Happiness Diet, it all began with global consumer product giant Procter & Gamble (P&G).

P&G convinced the American public to abandon the use of animal fats in favor of its own industrially-processed vegetable oil.

When William Procter and James Gamble teamed up and began manufacturing soap from cottonseeds during their company’s infancy, they realized that this process generated a lot of waste in the form of cottonseed oil.

This oil would eventually be peddled off as a “nutritious food,” though it has virtually no nutritional value at all. In its raw form it’s actually a toxin that some countries use as a form of male birth control.

A crafty array of marketing tactics combined with aggressive sample distribution eventually landed this cooking oil into millions of homes and restaurants throughout America.

Though this feat took considerable time and effort, the transformation of this industrial waste from filth to food was a success, and the rest is history.

A piece published in Science Monthly succinctly sums up how cottonseed oil, and vegetable oils at large, went from noxious waste to common cooking oil:

Vegetable Oil is Extremely Unhealthy, and Here’s Why

So what’s the big deal? If vegetable oil supposedly helps lower cholesterol and prevent artery hardening, does it really matter where it comes from or how it came to be standard fare in the American palate? Not so fast.

Here are a few dirty facts about vegetable oil that you may not know:

A combination of high heat, pressure, and chemical solvents is used to extract vegetable oils from plants, exposing them to an incredible amount of air and light.

When this occurs, these oils oxidize and become rancid, as well as lose many or all of their healing antioxidants. This renders them toxic and inflammatory.

2) Many vegetable oils undergo hydrogenation, which turns them into trans fats

In order to create a desirable consistency and texture for use in baking and other forms of cooking, vegetable oils are often hydrogenated to make them “creamier” and solid at room temperature.

Hydrogenated and partially-hydrogenated vegetable oils are essentially trans fats that interfere with the body’s normal metabolism of nutrients, leading to health conditions such as:

The hydrogenation process might make vegetable oils last longer on the shelf, but consuming them has repeatedly been shown in the scientific literature to induce many forms of cancer.

One study out of Vanderbilt University found that trans fat consumption is associated with an increased risk of death.

Not only from heart disease but from all causes, meaning these oils are generally toxic to human health.

3) Vegetable oils are associated with cancers of the colon, breast, and more

Similar case studies have demonstrated trans fat intake as a major risk factor for colon and other forms of cancer as well.

What Cooking Oils ARE Good for You?

So what’s the solution? Reverting back to the animal fats of old is a surefire way to avoid the pitfalls of vegetable oil consumption.

If you don’t consume animal products, be sure to use healthy saturated fats such as palm and coconut oil.

“Unsaturated fat makes up 74% of the fat that is found in clogged arteries, and more than half of that is polyunsaturated fat,” explains Dr. Josh Axe, a leading expert in progressive health and nutrition.

The best oils you can use for cooking, as extensively corroborated by the renowned Weston A. Price Foundation, include:

By A Von Butz, Guest author / Alexander: I don’t recommend consuming animal products at all. They are wrong both from a moral and health-related standpoints.