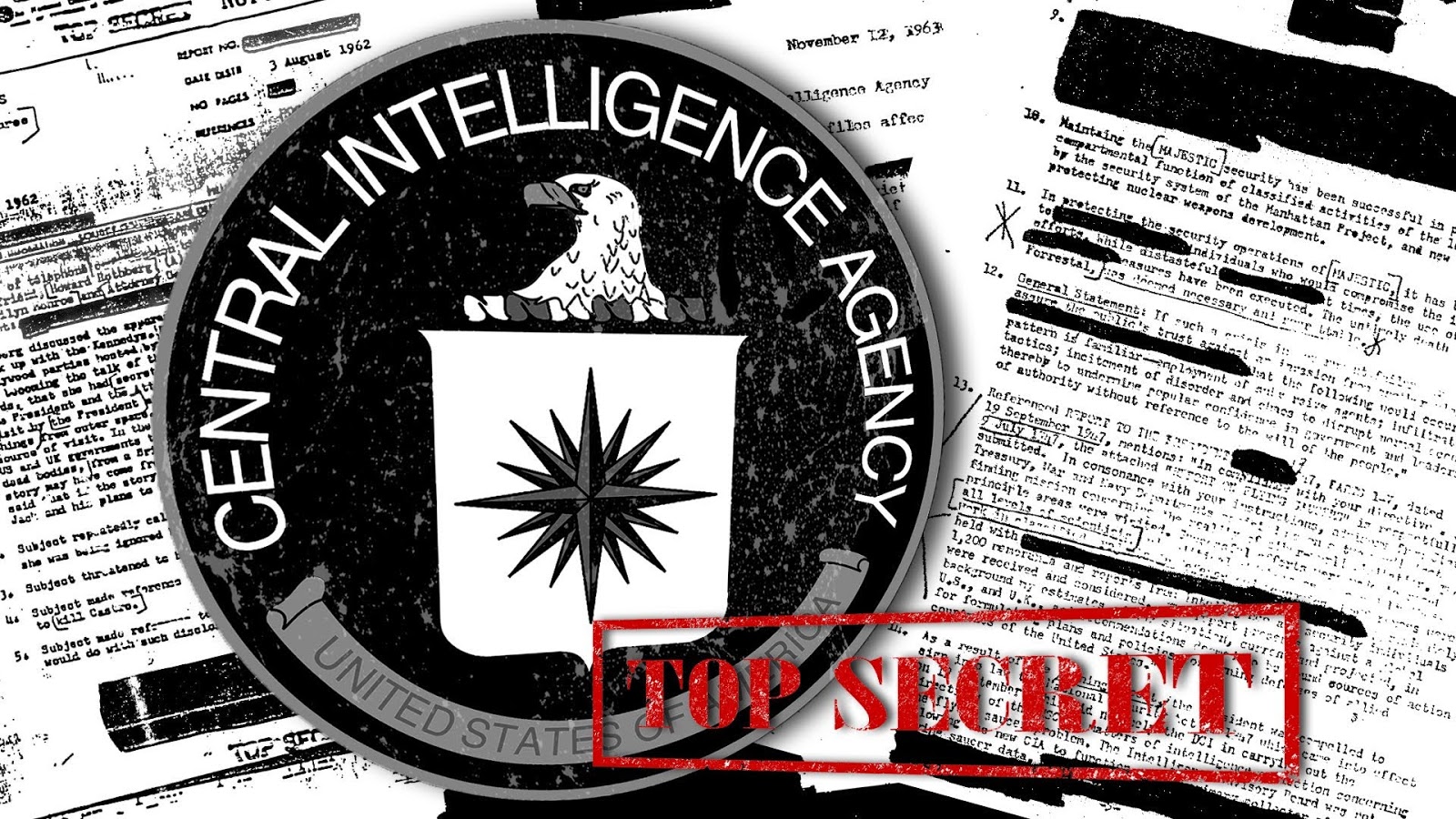 Yes, the Government Would Do That: Declassified Files Proving Governmental Crimes

Declassified files are useful in a world where truthtellers and open-minded investigators are shut down, censored and accused of being “conspiracy theorists.”

Amazon too is part of this emerging multinational corporate technological oligarchy, and you may remember they have been caught censoring books in the past (such as No One Died at Sandy Hook by Jim Fetzer) by forbidding them to be sold on their platform.

The handy thing about declassified docs is that they are genuine pieces of evidence that prove governmental criminality. 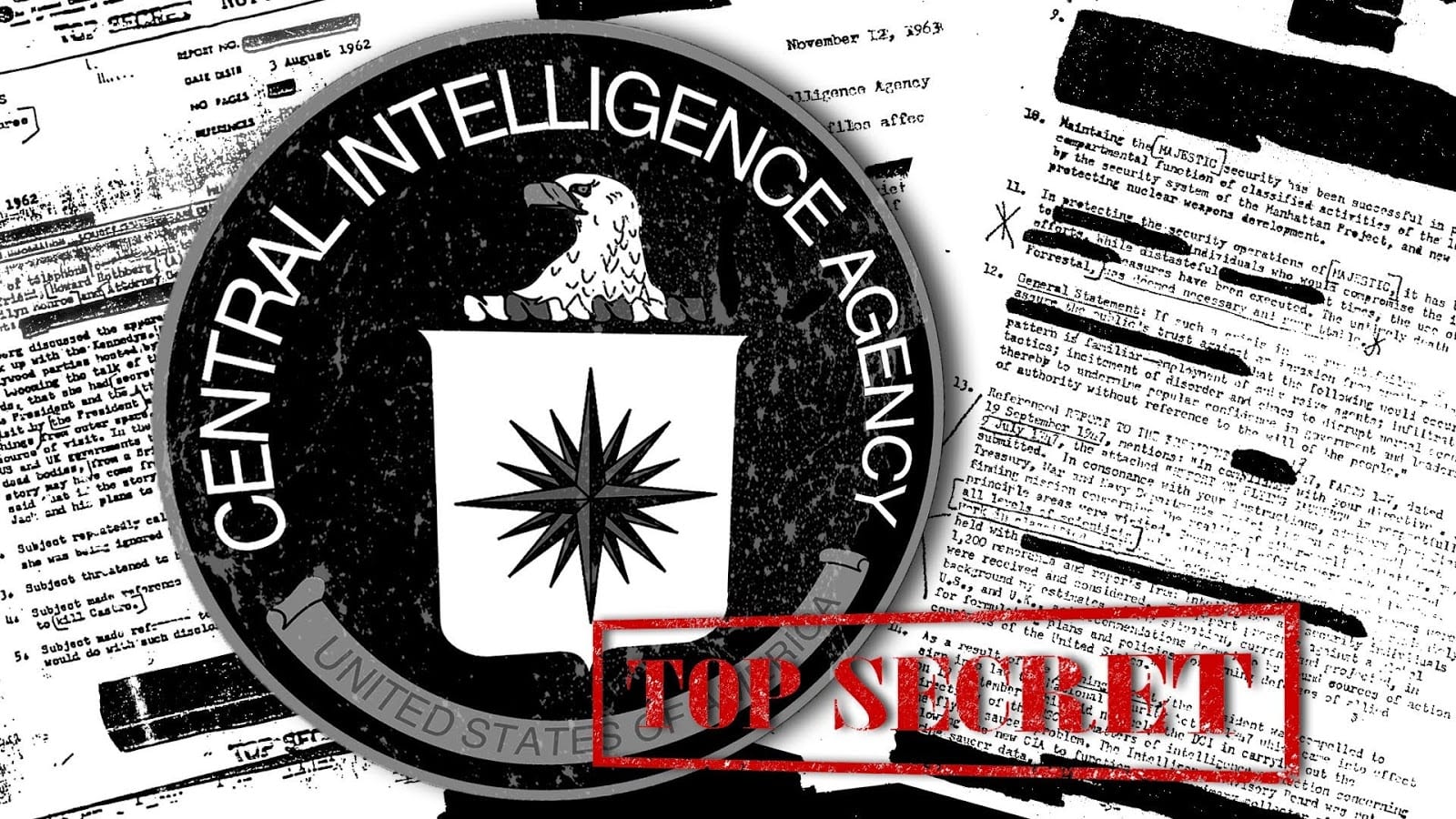 It’s hard for naysayers and censors to deny the authenticity of governmental declassified files which show that our history is full of conspiracy fact, not conspiracy theory.

With that in mind, here is part 1 of a list of 20 declassified files (most from the US Government) proving the very real crimes it has been engaged in, spanning a variety of areas including forced sterilization, mind control, weather modification, false flag operations and igniting war. The documents speak for themselves.

Think that World War II ended with the defeat of the Nazis? Think again. They didn’t get defeated; they just went south (Argentina) and joined the ranks of their conquerors (US, UK, Russia) in a dirty deal of legal immunity for inside information.

The German scientists, technicians and engineers had made brilliant and groundbreaking advances in many fields in the leadup to and during the war, and the victors didn’t have a moral problem with the Nazi weapons of destruction… the only problem was that the brilliant scientists were on the wrong side.

The US got a sizeable portion of these Nazi scientists (around 1500) and smuggled them into NASA and the CIA, where some of them such as Wernher von Braun went on to make a name for themselves.

Thus, the US willingly allowed its military and intelligence agencies to be infected with Nazi ideology, which continues to this day. You can read the declassified docs relating to Project Paperclip or Operation Paperclip here.

2. Declassified Files: The Escape of Hitler and Other Nazis to Argentina

The mainstream narrative is that at the end of WWII, Hitler committed suicide in Berlin in a bunker. It’s a nice story, but apparently, that’s all it is – a story.

In his book Hitler in Argentina: The Documented Truth of Hitler’s Escape from Berlin, author Harry Cooper produced a slew of astounding evidence that Hitler and other top Nazis such as Martin Bormann traveled in German submarines all the way to Argentina.

Some of the evidence that this astonishing claim is true are these FBI declassified docs.

“Along with the FBI documents detailing an eye witness account of Hitler’s whereabouts in Argentina, more evidence is coming to light to help prove that Adolf Hitler and Eva Braun did not die in that bunker.

In 1945, the Naval Attaché in Buenos Aires informed Washington there was a high probability that Hitler and Eva Braun had just arrived in Argentina. This coincides with the sightings of the submarine U-530.

Added proof comes in the form of newspaper articles detailing the construction of a Bavarian styled mansion in the foothills of the Andes Mountains.

Further proof comes in the form of architect Alejandro Bustillo who wrote about his design and construction of Hitler’s new home which was financed by earlier wealthy German immigrants.

… [an] archeologist from Connecticut State, Nicholas Bellatoni was allowed to perform DNA testing on one of the skull fragments recovered.

What he discovered set off a reaction through the intelligence and scholarly communities. Not only did the DNA not match any recorded samples thought to be Hitler’s, they did not match Eva Braun’s familiar DNA either.”

This is a great one for all those who think that the government would never hurt its own citizens. Operation Northwoods was the outrageous plan for the US military to attack its own people and cities (Washington DC and Miami) as a false flag operation to frame Cuba.

It was a pretext to invade Cuba. The 1962 declassified US Joint Chiefs of Staff Memo was entitled “Operation Northwoods – Justification for US Military Intervention in Cuba.”

In its own words, the document states that a “series of well coordinated incidents will be planned to take place in and around Guantanamo to give genuine appearance of being done by hostile Cuban forces.” 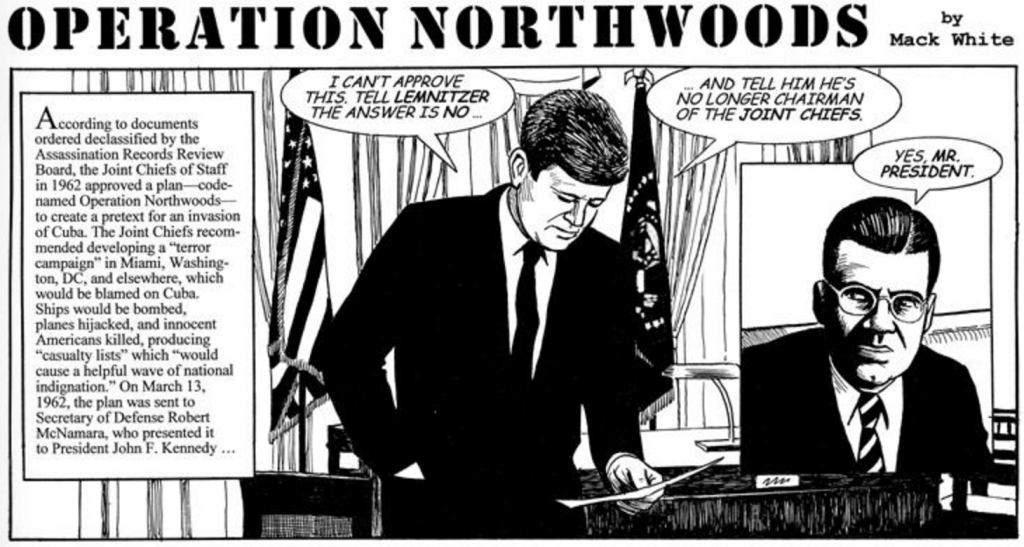 Luckily President John F. Kennedy had the nous to reject the plan; by 1962 he had discerned the insidious influence of Military Intelligence Complex upon his presidency. You can find some of the declassified docs for Operation Northwoods here.

CoIntelPro has become a famous word of its own, derived from the full operational name Counter Intelligence Program. This was a program run by the FBI under Hoover which started in 1956.

CoIntelPro was a series of undercover operations that targeted people and groups the US Government deemed were a problem, such as the communist party, other far left groups, civil rights groups, far right groups (e.g. the KKK) and individuals activists such as Martin Luther King.

Did You Know? The US Government Was Found Guilty in Court for the Assassination of Martin Luther King Jr. – It Was Never Reported by the MSM

The scope of CoIntelPro was broad: it involved monitoring, surveilling, infiltrating, discrediting and disrupting.

Although then Attorney General Robert Kennedy authorized some spying, the FBI was given an inch and took a mile (much like today’s spy agencies), clearly overstepping the bounds of legality.

It became a way for the government to intimidate and stifle dissidents. You can read declassified docs on CoIntelPro here. 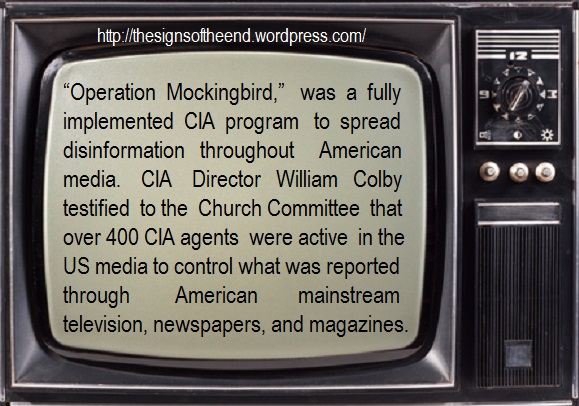 Operation Mockingbird was a CIA project to infiltrate and covertly control the media. It began in the 1950s under then CIA director Allen Dulles.

The declassified files (most are classified and secret, but a tiny fraction here) show how the CIA infiltrated the mainstream media and had its pieces inserted into TV, newspapers and journals everywhere as “news” when they were nothing more than lies and propaganda.

Richard Salant, former President of CBS News, once said that “our job is to give people not what they want, but what we decide they ought to have.”

Mockingbird was famously exposed in the 1975 Church Committee hearings (see an video excerpt here). Nothing much has changed today.

Journalists worldwide are still on the payroll, and some were brave enough to talk about it, such as the late Udo Ulfkotte.

Was Udo Ulfkotte Killed for Spilling the Beans? Hero Journalist Who Exposed CIA Infiltration and Manipulation of Media Found Dead 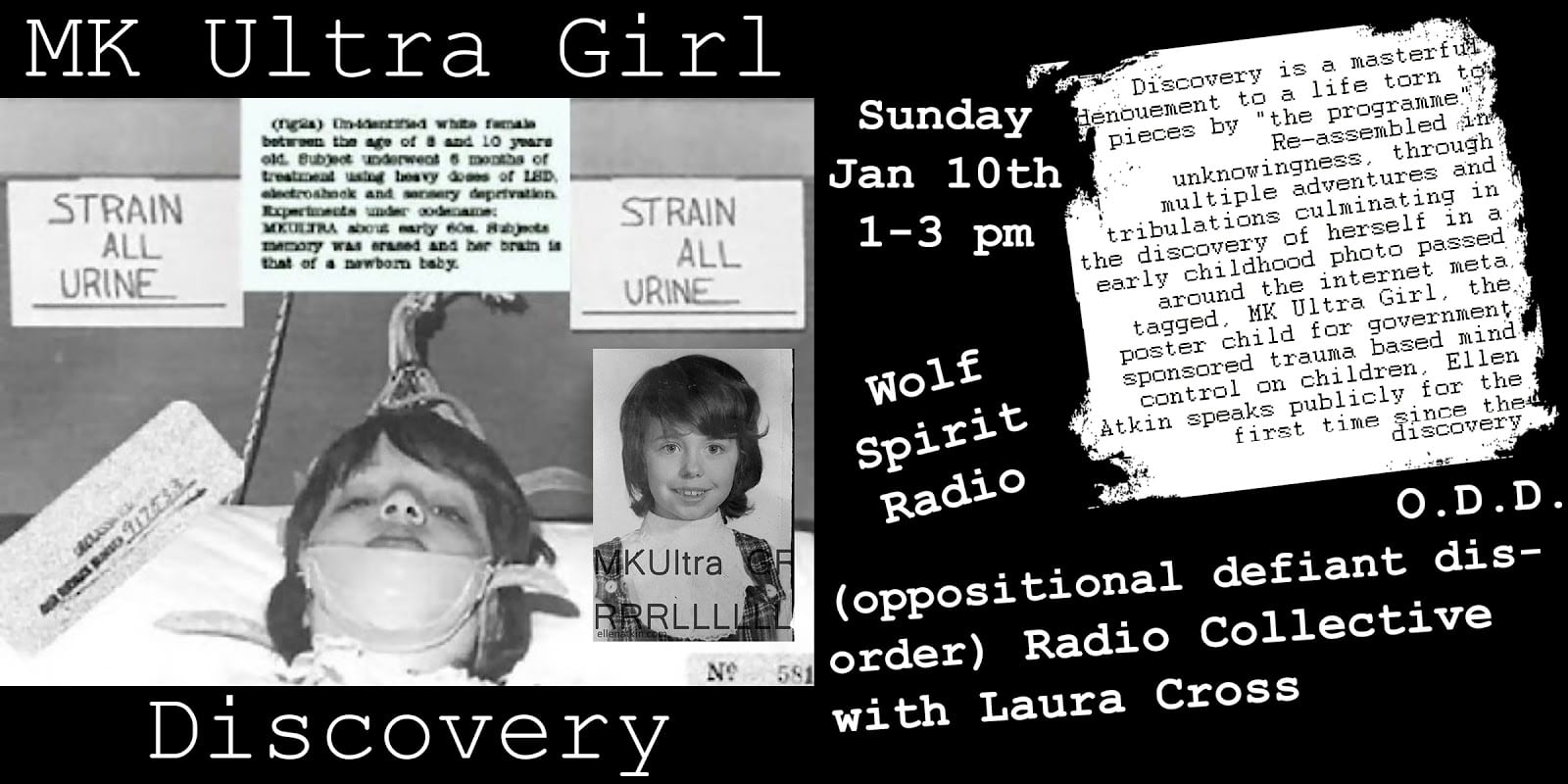 Operation MK Ultra has become so infamous that the term is basically synonymous with mind control.

The “MK” of MK Ultra stands for mind kontrolle (German spelling of control), with a nod to the German Nazi scientists who developed it for the CIA who were brought in under Paperclip.

Eisenhower approved using Nazi scientists and Jewish victims as guinea pigs. MK Ultra was so large it had 149 sub-projects.

By 1953, the emphasis of MK Ultra was LSD (see below), but by the 1960s, this had changed into biological radio communications. Helms later destroyed much of the MK Ultra archive when he left in 1972, but some declassified files remain.

There, they were surreptitiously given a wide range of substances, including LSD, and monitored behind one-way glass.

This was not the first time, nor the last, that the US Government used drugs and other substances with which to experiment upon unsuspecting individuals.

The point was to study the effects of LSD and gain research on the potential military and intelligence uses of sexual blackmail, surveillance technology and mind-altering drugs. Some of the declassified files are here. 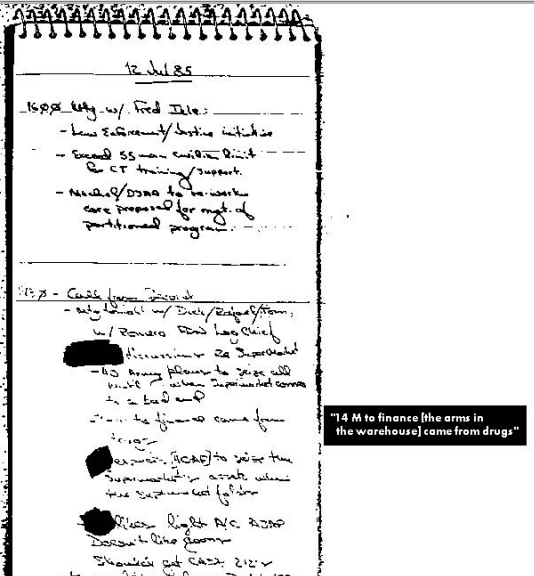 The CIA has long used illegal drugs to fund its illegal operations. Drugs are often one of the secret motivation behind wars.

Vietnam is part of the Golden Triangle of heroin-producing opium poppies, Afghanistan is also home to huge swathes of opium poppies and after the US invaded many Central and South American countries, it took control of the cocaine production there.

In 1996, journalist Gary Webb exposed the connection between the CIA, cocaine and the Nicaraguan contras. In the early 1980s the CIA pushed the sale of cocaine in Los Angeles to help finance their covert war against the Sandinistas in Nicaragua.

Did You Know? There is Overwhelming Evidence That the CIA is Smuggling Drugs for Decades

You can read some of the declassified files on this here, including excerpts from Oliver North’s notebook obtained under the FOIA.

North writes that Air Force General Richard Secord told him (North) that “14 M to finance [the arms in the warehouse] came from drugs.”

Operation Gladio, which still continues to this day, is the codename for a clandestine NATO “stay-behind” operation in Italy during the Cold War. The CIA spearheaded Gladio under the pretext of preventing the spread of Soviet communism in Europe.

The name gladio is the Italian form of gladius, a type of Roman shortsword. Gladio came to refer to a whole range of stay-behind cells and groups in Europe, although originally, Operation Gladio was the Italian branch. Gladio became famous when then Italian Prime Minister Giulio Andreotti talked about it.

Gladio involved the Freemasons, Mafia members and the Vatican, who all united with the CIA and NATO in a holy war against communism.

Operation Gladio was responsible for some horrible atrocities and false flag attacks in Italy, such as the bombing of Bologna train station in 1980. 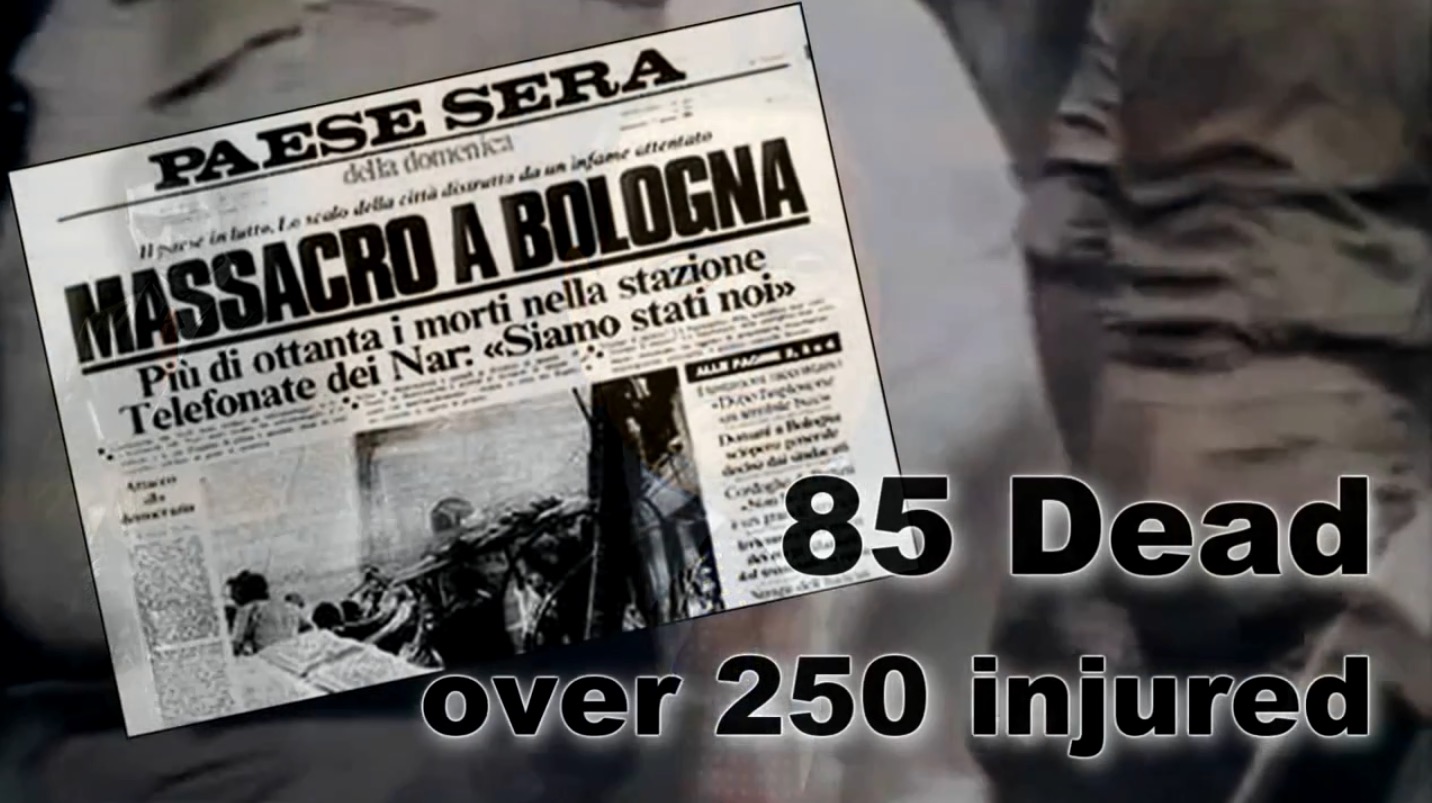 Today, even the Western-backed fighters in Nazi Ukraine and Syria are basically Gladio fighters. Declassified files on Gladio can be found here.

Harry Cooper’s book, Hitler in Argentina: The Documented Truth of Hitler’s Escape from Berlin, is available to purchase on Amazon.com

By Makia Freeman, guest author, HumansAreFree.com / Make sure to subscribe for part 2.