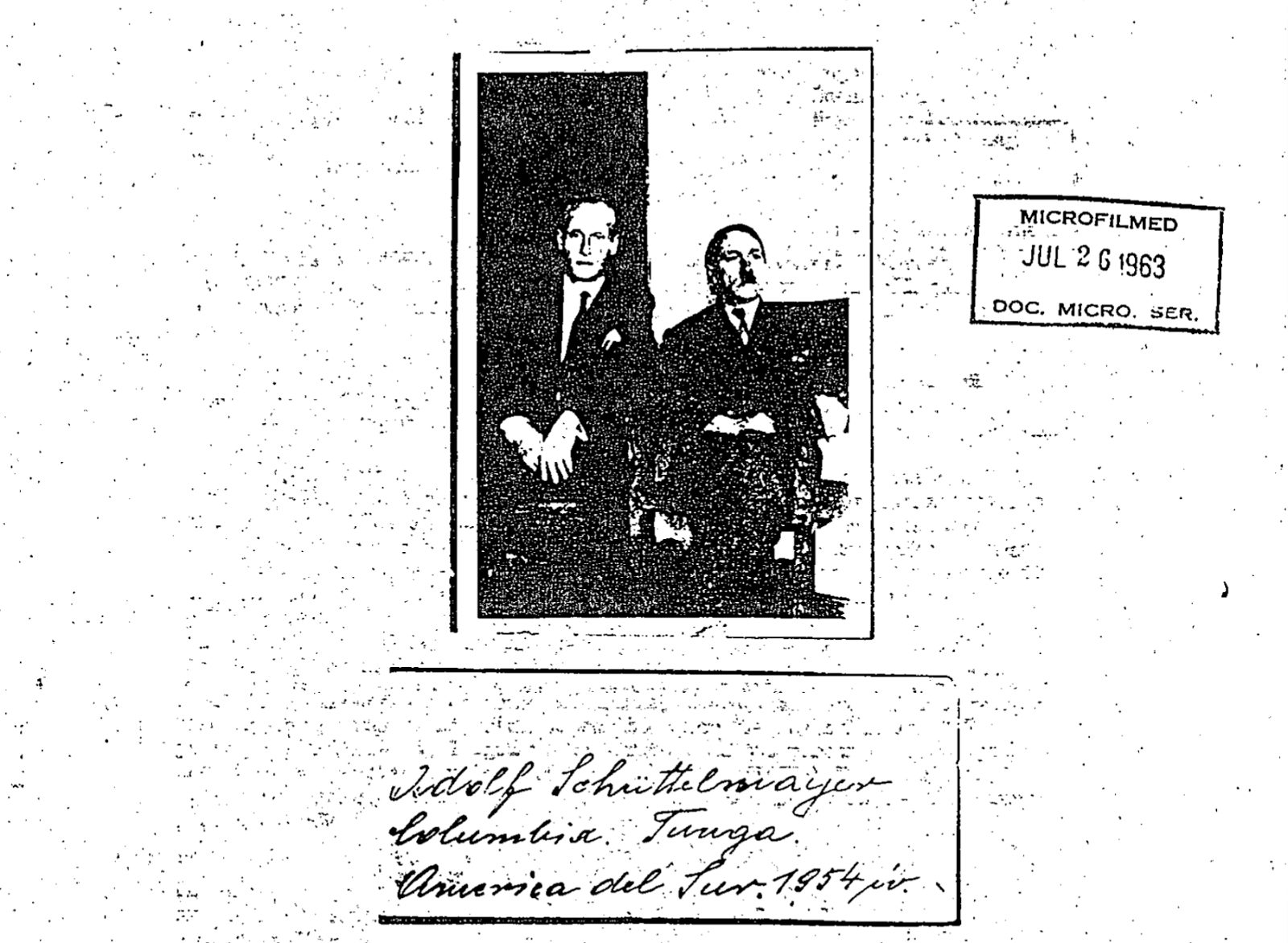 Declassified CIA files show that in 1955, an informant boasted about meeting with Adolf Hitler in Colombia, and provided pictures of himself with the Fuhrer (below) – over 10 years after the Fuhrer’s suicide.

Declassified files show that in 1955, the CIA’s Western Hemisphere Division (WHD) chief received a secret memo, boasting a subject line that no doubt caused him to jump up from his chair, and spew any liquid in his mouth across the room — “Operational: Adolf Hitler.”

As the shocking title implies, the acting station chief in Venezuela claimed to have received a once in a lifetime tip from one of his contacts — a decade after his apparent death by suicide in the Fuhrerbunker, Hitler was in fact very much alive, and living in Argentina.

In brief, one of the action station chief’s informants, CIMELODY, was contacted by a trusted friend, former SS trooper Phillip Citroen, who claimed to have been in touch with Hitler — masquerading under the pseudonym Adolph Schuttlemayer — about once a month in Colombia, while there on a trip from Maracaibo as an employee of the Royal Dutch Shipping Company. 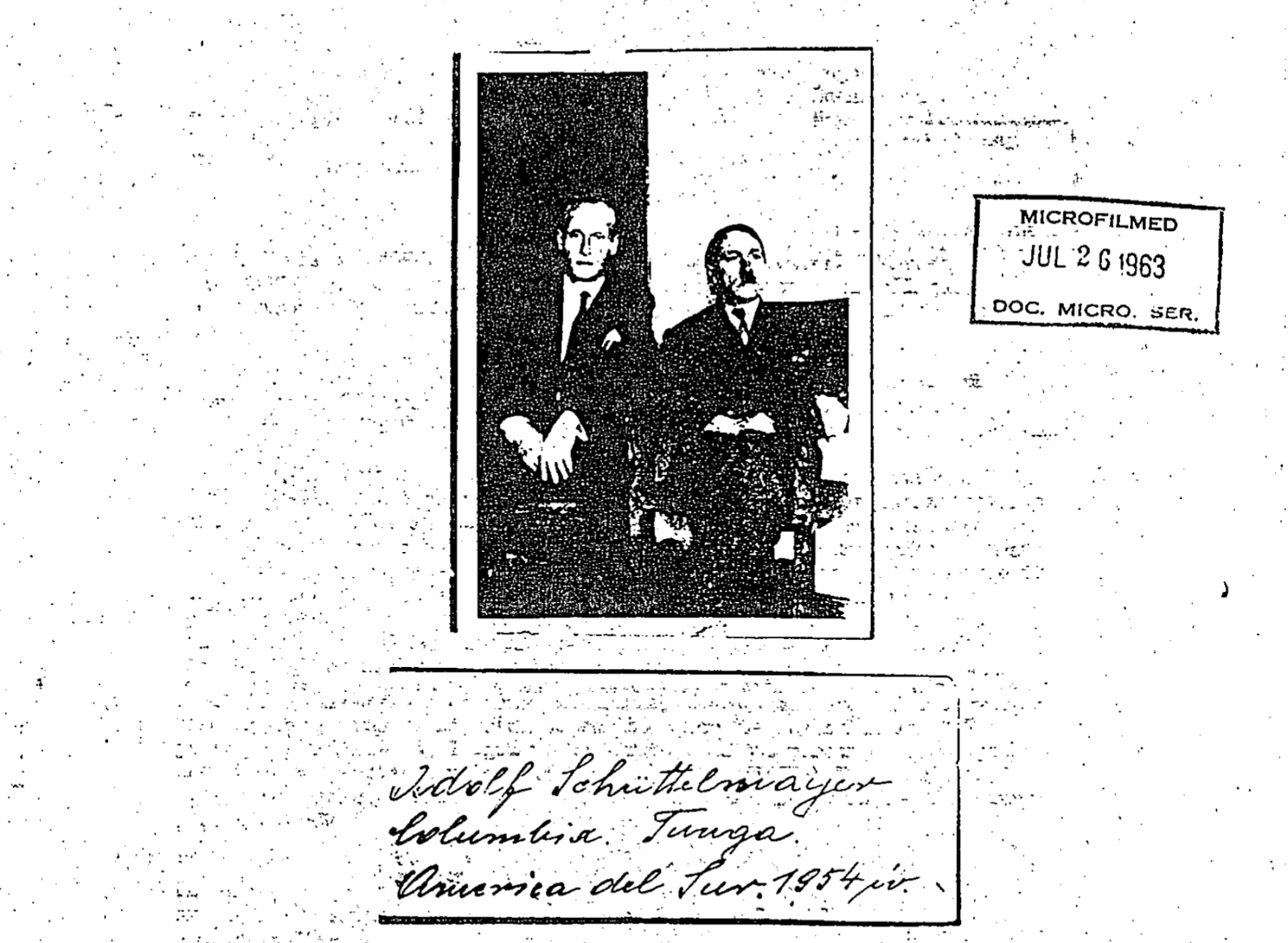 Citroen indicated to CIMELODY he had even taken a picture with the fallen Fuhrer, and a grainy snap is indeed included with the memo.

He also stated Hitler left Colombia for Argentina in around January 1955, and added that as ten years had passed since the end of World War II, the Allies could no longer prosecute Hitler as a criminal of war, suggesting erroneously the statute of limitations on war crimes are rather brief.

The message concluded that neither CIMELODY nor the CIA station itself was in a position to give an intelligent evaluation of the information included in the memo, but it was being forwarded “as of possible interest.”

The no doubt flabbergasted WHD chief followed up on the memo by reviewing the agency’s files, and found a year prior, there was indeed a report not only making the same claim regarding Hitler not being dead, but also suggesting there was a whole colony of Nazis in South America — again made by Citroen.

“Phillip Citroen told a former member of this base that while he was working for a railroad company in Colombia, he met an individual who strongly resembled and claimed to be Adolf Hitler.

“Citroen claimed to have met the individual at a place called ‘Residencias Coloniales’ in Tunja, Colombia, which is, according to the source, overly populated with former Nazis, following this alleged Adolf Hitler with an idolatry of the Nazi past, addressing him as ‘der Fuhrer’ and affording him the Nazi salute and storm-trooper adulation!” the memo said.

Alexander: Also, quietly declassified FBI files are proof that Hitler fled to Argentina in 1945 and the USA was aware of it. Here is a link to the FBI vault of declassified files.

If you want to learn more details about Hitler’s arrival in Argentina via Uboat, straight from an FBI informant, and also pictures of his mansion, please follow this link.

More Trouble Than It’s Worth

A few days later, the station chief wrote to the WHD chief again, asking if they wished to make further investigations into the potentially still-extant Hitler or not.

While he had no objections to undertaking further investigations into the matter, he felt “enormous efforts could be expended on this matter” without the possibility of establishing anything concrete.

As a result, he suggested the matter be dropped.