“Realize that everything connects to everything else.” ― Leonardo DaVinci

Synchronicity is an inevitable aspect of human activity, whether commercial or social. There are patterns that manifest synchronicity in our activities.

We are all connected. Literally! As much as it sounds like some spiritual wisdom to live by, we are all psychophysically connected. We are connected through our interactions, through the laws of society, through the chemistry we insert into our bodies, geological events, thought patterns, primal needs and the nature of who we are.

And not just that, our connection activities mimic biological processes that keep us alive, our circadian cycles are synchronized with the planet’s rotation, our mood is strongly influenced by the weather.

Everything is connected with everything else!

Add the element of smartphones and internet to this and you can’t but think that we are all like one giant organism.

Twitter is perhaps the best platform to trace patterns of synchrony in social media. It is absolutely remarkable how much a limited 140-character tweet is able to achieve in terms of publishing information on a global platform.

There are trending topics and campaigns generated through Twitter to which people can express their opinions.

In addition to that, Twitter is an excellent platform for a debate over an issue concerning a group of people. The patterns of synchronicity can be traced by an observation of all these daily activities on a scale of a certain geographical area, such as a city or a country or even the world.

In a paper published by the Journal of the Royal Society Interface, researchers at the New England Complex Systems Institute (NECSI) have observed a new pattern of synchronized activity: a simultaneous peak of Twitter activity stretching across half the planet, from Europe and Africa to Asia and Oceania.

The researchers at NECSI observed over 500 million tweets to gather the synchronizations created by everyone’s routine.

In case of the tweets of a single city, human activity presents itself as a heartbeat with the first strong peak of activity happening when people begin their work at the city centre.

A secondary peak in activity is a sign of post work hours. And the final but low peak is observed when the people are believed to retire for the night.

The NECSI continued looking into these daily patterns for over a period of one year. The study showed that these patterns follow people’s work schedule rather than the natural cycles of day and night.

The NECSI studied the tweets of 52 metropolitan areas all over the world. Though the heartbeat pattern remained the same in almost all these areas, the densities of peaks seemed to have changed in terms of size and duration.

It doesn’t seem surprising that cities in the same longitude and time zone tend to have similar patterns.

The synchronicity in daily activities of people is witnessed throughout the globe, and especially in the Eurasian landmass. 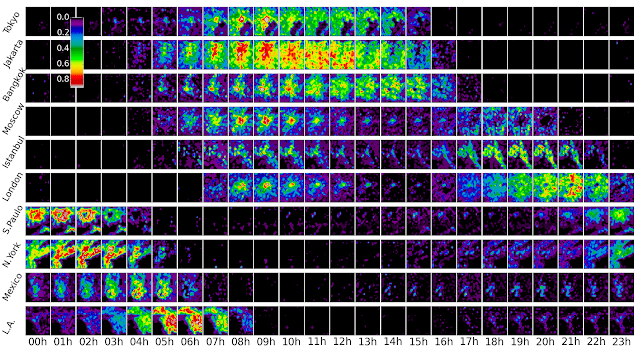 We share ideas and information, yes, we even have emoticons to give glimpses of our emotions, but nobody really knows how we truly feel.

Speaking with someone in person is the opposite. They might not share much, but you sense how they feel. You know the depth behind the things they speak.

Will we be able to create a system where we have such interconnectedness, but on a more emotional level? How would that system look like? What do you think?