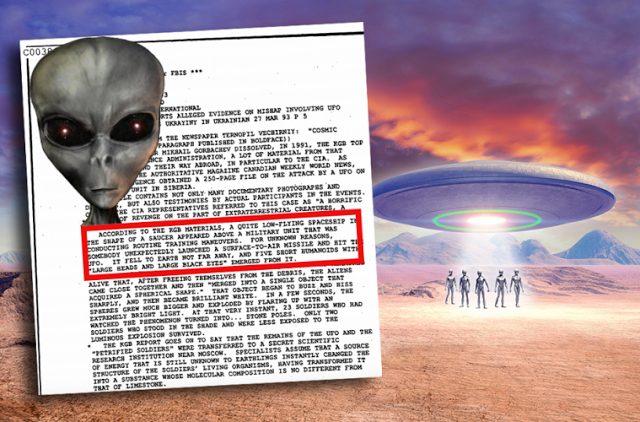 Global governments and intelligence agencies around the world have released hundreds of thousands of pages of documents pertaining to the UFO phenomenon over the past few years.

These files indicate that objects are commonly tracked on radar and pursued by our own military craft, which are then sent out to take a closer look. The files also reveal there have been sightings of strange objects travelling at tremendous speeds and performing maneuvers that no known aircraft is capable of performing.

These types of UFOs might now be officially verified within the mainstream, but they’ve been seen, photographed, and recorded by credible witnesses for decades.

For example, here’s a document (straight from the CIA’s FOIA Electronic Reading Room) pertaining to “a group of red, green, and yellow flying saucers” that were seen “hovering” over multiple military bases in Antarctica. 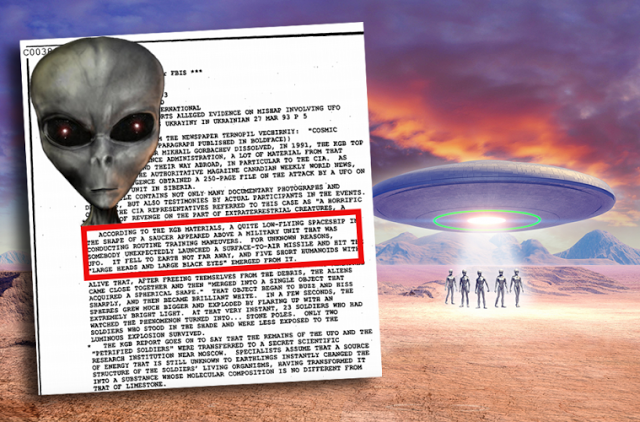 Here’s another detailing how, when intercepters approached the object, pilots lost “all instrumentation and communications.” Here’s a great interview (and there’s no shortage of them) with navy commander pilot Graham Bethune, who describes another extraordinary in-flight encounter.

These objects are thought to be extraterrestrial in origin, not only because of their technological superiority, but also because many high-ranking political and military insiders, along with prestigious academics, have shared information they’ve been privy to regarding actual intelligent extraterrestrial beings visiting our planet.

There could be several different groups doing so at the present moment. It may sound far-fetched, but as we move through 2017 and beyond, bits of truth will continue to leak out, and the “official campaign of secrecy and ridicule” that Roscoe Hillenkoetter described to the New York Times in 1960 may come to an end.

That being said, once this box is opened, everything will change. It will have tremendous implications for humanity — philosophically, scientifically, and technologically. Our world would change forever.

It shouldn’t really come as a surprise that the CIA and other U.S. intelligence agencies were keeping tabs on other countries.We know spying happens all the time, and other governments probably did the same to North American governments as well.

The UFO issue has obviously been of extreme interest to these agencies, given the scale of resources put toward investigating it. One document within the CIA archives also shows that they were interested in reports of actual extraterrestrial bodies.

For example, here is one that was addressed to “certain scientists of distinction,” to “aeronautical and military authorities,” and to “a number of public officials.”

The document, stored in the FBI database, shows interest in a letter written by someone with “several university degrees” and a former “university department head.” It provides information, (on pages 21 and 22) about extraterrestrial beings, their craft, how they operate, and where they come from.

Again, the question to ask here is, why were intelligence agencies so interested in this? They continue to investigate any reports of extraterrestrial bodies, and I have to wonder if it’s because they’ve had secrets of their own.

Is it because, as Apollo 14 astronaut Dr. Edgar Mitchell once put it so bluntly, “there have been crashed craft, and bodies recovered”?

When you study ufology, you come across all sorts of stories, and one interesting thing these stories seem to share is that “they” (whoever is operating these crafts) are not interested in confrontation.

For example, in a (well-known) document released via the Freedom of Information Act (FOIA), Four-Star General Nathan Twinning wrote that the “phenomenon reported is something real and not visionary or fictitious” and that “the reported operating characteristics such as extreme rates of climb, maneuverability (particularly in roll), and action which must be considered evasive when sighted or contacted by friendly air-craft and radar, lend belief to the possibility that some of the objects are controlled either manually, automatically or remotely.”

The key word there is “evasive.” This point was also made a few years ago by former Canadian Defence minister Paul Hellyer, who stated that:

“Decades ago, visitors from other planets warned us about where we were headed and offered to help. But instead, we, or at least some of us, interpreted their visits as a threat, and decided to shoot first and ask questions after.”

In that same speech, he also mentions the fact that, as a result of our own displays of aggression, the UFOs started to take “corrective measures to avoid our air-craft,” and that some pilots actually lost their lives as a result of retaliation.

Which brings us to a document, stored in the CIA archives, that describes how Mikhail Gorbachev — who, by the way, once publicly stated that “the phenomenon of UFOs does exist, and it must be treated seriously” — was “dissolved.”

It’s a document keeping tabs on a report an media outlet put out, which again, clearly shows a high level of interest from them.

It states that “U.S. intelligence obtained a 250-page file on the attack by a UFO on a military unit in Siberia,” and it goes on to describe something extraordinary:

The file contains not only many documentary photographs and drawings, but also testimonies by actual participants in the events. One of the CIA representatives referred to this case as “a horrific picture of revenge on the part of extraterrestrial creatures, a picture that makes one’s blood freeze.”

According to the KGB materials, a quite low-flying spaceship in the shape of a saucer appeared above a military unit that was conducting routine training maneuvers.

For unknown reasons, somebody unexpectedly launched a surface-to-air missile and hit the UFO. It fell to Earth not far away, and five short humanoids with “large heads and large black eyes” emerged from it.

It is stated in the testimonies by the two soldiers who remained alive that, after freeing themselves from the debris, the aliens came close together and then “merged into a single object that acquired a spherical shape.” That object began to buzz and hiss sharply, and then became a brilliant white.

In a few seconds, the spheres grew much bigger and exploded by flaring up with an extrememly bright light. At that very instant, 23 soldiers who had watched the phenomenon turned into… stone poles. Only two soldiers who stood in the shade and were less exposed to the luminous explosion survived.

The document then goes on to state:

The KGB report goes on to say that the remains of the UFO and the “Petrified Soldiers” were transferred to a secret scientific research institution near Moscow.

Specialists assume that a source of energy that is still unknown to Earthlings instantly changed the structure of the soldiers’ living organisms, having transformed it into a substance whose molecular composition is no different from that of limestone.

The document ends with a comment from a CIA representative, who said, “If the KGB file corresponds to reality, this is an extremely menacing case. The aliens possess such weapons and technology that go beyond all our assumptions. They can stand up for themselves if attacked.”

Quite remarkable, isn’t it? This isn’t the only story of retaliation with regards to what happens when our agencies encounter a UFO. Yet, in every instance, we are the instigators.

Something to think about.

Open Letter to NFL Players: You’re Being Used Previous post
The Most Affordable Way to Remove Fluoride from Tap Water Next post