Want To Stop The Control System? Then Stop Buying Into It!

Sure, the ruling elite’s planned world takeover with its increasingly encroaching psychopathic control system has to be up there as one of humanity’s greatest threats.

However, isn’t the ignorance and apathy shown by the majority in the populace: The sleeping masses, allowing unhindered progress of this control system, planned to make us acquiesce into one enslaved subservient entity, an even bigger threat?

With that said, many involved in the control system are not doing it for controlling purposes.

They’re simply doing it because they stand to make massive gains (power, profit and political gains) along the way: Consider those heading the banks or multi-nations corporations and the bribed politicians, how dramatically motivated some must be when overseeing the related agendas and tasks needed to be rolled out…

– Service to self (as opposed to service to others) underlies this greed-driven heartless motivation, paying little or no heed to the consequences of their actions…

Stop buying into the “convenience” con used to make us blindly accept the “smart” grid system and its related technology.

The ‘smart’ grid system is planned to entrap and control every aspect of our lives. As an autonomous A.I. control system in the ‘internet of things’, one of the most important aspects is that it has been planned to control all our money supplies through digital currency in a cashless society. The conveniences will be greatly outweighed by its entrapment.

We can refuse to go along with this by using cash to do our shopping. Stop using credit cards. Stop shopping in places that don’t take cash. Support businesses that rely on cash flows, such as farmer’s markets…

As for the ‘smart’ meters (dumb meters), refuse to have them installed.  Then there are those other wireless applications; smartphones, laptops, tablets… that also have intricate mass surveillance capabilities and threaten the health of you and your family as microwave radiation sources.

– We can at least stop giving them to our children…

Don’t buy into the “convenience” of the planned 5G technology with its faster downloads. 5G technology is, in effect, a health crisis waiting to happen.

Stop buying into the ‘divide and rule’ tactic 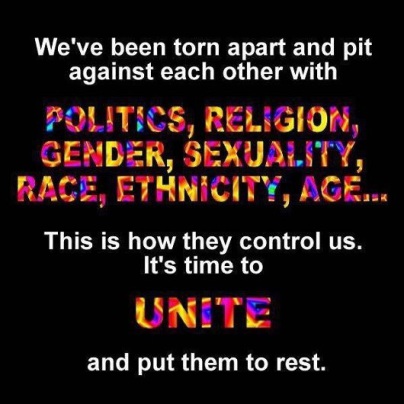 How can we ever do something about the control system if we’re too busy arguing and fighting with each other about things that don’t really matter? If the masses weren’t so divided and ruled. we wouldn’t be in the mess we’re currently in.

Stop buying into the distraction

Stop giving your power away by buying into distraction. As with divide and rule, the ruling authorities have set up a number of social engineering and mind control programmes supported by the mainstream media to distract you away from recognizing the truth about the elite’s destructive, unfair, unjust, criminal activities such as those false-flag psyops.

Stop buying into the fake wars

…with their secretly manufactured, or non-existent, forever-illusive ‘outsider enemies,’ designed to keep us in a perpetual state of fear.

War is a failure by default: In war, nobody ever wins. War is a sad and blatant indicator that humanity has far from progressed. All wars have been covertly manufactured by the elite for control and profit.

Even when factoring in the elite’s much invested mind control and social engineering programs, it beggars belief how anybody in this day and age can still believe that they’re ‘living in the land of the free.’ – For just 7 examples to show that we are not go HERE.

Stop buying into the fake food and healthcare systems

When it comes to food and healthcare matters stop buying into the fake or misleading information pushed on us by false advertising and marketing, fake gurus, phoney scientists and others who have been just as much deceived as anybody by Big Food and Big Pharma with their owned and controlled mainstream media.

Many of the journals are biased with bad science so that certain products get approved. Then there are the crooked approval bodies that allow these unhealthy products to go into the market.

As a scathing indictment, it’s easy to see why the food and healthcare systems will always fail: The Big Food and Big Pharma allopathic (conventional) healthcare establishments will drain and destroy your health because they have placed profits above the genuine welfare concern of people.

By Paul A Philips, Guest author