Star Trek Discovery actor Anthony Rapp alleges Spacey made unwanted sexual advances towards him when he was just 14-years-old.

Even though Rapp has been telling his good friends and family members for more than 20 years Spacey attempted to have a sexual encounter with him, he finally found a news media organization willing to actually publish the actor’s name.

While one magazine in 2001 refused to publish the A-lister’s name, Buzzfeed did not shrink back and on Sunday published the story alleging Spacey attempted to bed a young adolescent boy.

Rapp told Buzzfeed the two met on Broadway when Spacey was 26 and Rapp just a young boy. Rapp was a member of the cast of Precious Sons, while Spacey was a supporting actor in the play A Long Day’s Journey Into Night and the two would meet at post-show gatherings.

On one occasion Rapp claims Spacey took him to a nightclub along with some other teenagers. Although he was not legally allowed to be in the club, the Spacey entourage passed right through security with no questions asked, he says.

But Rapp says he was devastated by what happened to him the night Spacey invited him over to his apartment for a party Rapp says was only attended by other adults. Being the only teenager he admitted to getting “bored” quickly and retreated to Spacey’s bedroom to watch TV alone.

Rapp says sometime after midnight, after all the other adults went home, Spacey came into his room, picked up the teenager, put him on his bed and made an unwanted and unspecified sexual advance towards the 14-year-old.

I came forward with my story, standing on the shoulders of the many courageous women and men who have been speaking out 1/3

“My memory was that I thought, Oh, everybody’s gone. Well, yeah, I should probably go home,” Rapp said. Spacey, he recalled, “sort of stood in the doorway, kind of swaying. My impression when he came in the room was that he was drunk.”

Although Rapp doesn’t recall Spacey saying anything to him, his mind has never forgotten what he says happened next:

“He picked me up like a groom picks up the bride over the threshold. But I don’t, like, squirm away initially, because I’m like, ‘What’s going on?’ And then he lays down on top of me… He was trying to seduce me… I don’t know if I would have used that language. But I was aware that he was trying to get with me sexually.”

Rapp says he was able to, after some time, “squirm” out from underneath Spacey and go to the bathroom and gather himself. He then came out and told the now Hollywood star he had to go home.

From that encounter until now, Rapp has spent an untold amount of time trying to process all that happened to him that day in Spacey’s bedroom. He said:

“My head was spinning… I have a memory of turning around and [thinking], What was that? What am I supposed to do with it? What does it mean?… The older I get, and the more I know, I feel very fortunate that something worse didn’t happen… And at the same time, the older I get, the more I can’t believe it. I could never imagine [that] anyone else I know would do something like that to a 14-year-old boy.”

Immediately following the story’s publication on Buzzfeed, and in a rare discussion of his past (especially his sexuality), Spacey apologized to Rapp on Facebook. Here’s what Spacey wrote. He claims to have no recollection of coming on to the actor when he was just a teenager.


Spacey also acknowledged being gay for the first time, even though it has long been a well-known secret in Hollywood and elsewhere.

But will an apology be enough to quiet Rapp’s mind and emotions from such a traumatic life event, the fallout of which has plagued him for years?

He admitted to Buzzfeed that he was devastated by Spacey’s actions towards him, even paralyzed with fear that he might actually have to communicate with Spacey at some point if their paths ever crossed.

Rapp remembers calling Spacey a phony when he won an Oscar for the best supporting actor in The Usual Suspects. It’s unclear from the Buzzfeed interview if he was referring to Spacey being a pedophile or a gay man but Rapp remarked, “At that time, I wanted to scream to the rooftops, ‘This guy is a fraud!’”

Rapp claims to have consulted a lawyer to see if there could be a case against Spacey but the advocate said no such case could be brought against the Oscar-winning A-list actor.

Even still, the Star Trek Discovery actor said he could not let it go and recently felt empowered to tell his story following the dozens upon dozens of women coming forward to accuse Hollywood mogul Harvey Weinstein of rape, molestation, and sexual harassment.

“Part of what allowed the Harvey situation to occur was that there was this witting and unwitting conspiracy of silence… The only way these things can continue is if there’s no attention being paid to it, if it’s getting forgotten.”

While Spacey’s apology is far from an admission of guilt, his statement may permit others to come forward with their own accusations.

Pedophiles prosper and proliferate when their victims stay silent. It’s time for the decades-long era of silence surrounding Hollywood’s pedophile elite to be broken with the truth of what is really going on.

Rapp told his story in 2001 to the Advocate, but the magazine redacted Spacey’s name from the published version of the story.

Buzzfeed secured testimony from the Advocate’s editors, as well as many of Rapp’s friends, that he has been telling this same story for years, even decades, but only now, in light of the Weinstein scandal, the whole story is being published. 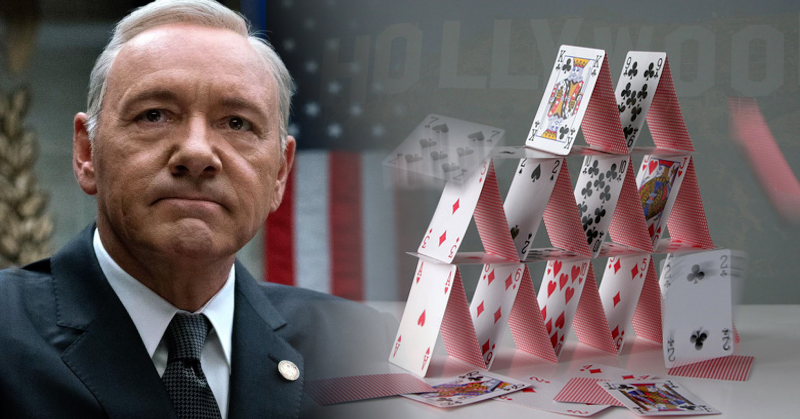 Netflix announced on Monday that it would be pulling the plug on their acclaimed series House of Cards after allegations surfaced yesterday that Kevin Spacey, the series’ main character, sexually assaulted a 14-year-old back in 1986.

“Media Rights Capital and Netflix are deeply troubled by last night’s news concerning Kevin Spacey,” said the companies in a joint statement, “In response to last night’s revelations, executives from both of our companies arrived in Baltimore this afternoon to meet with our cast and crew to ensure that they continue to feel safe and supported. As previously scheduled, Kevin Spacey is not working on set at this time.”

The decision to end the show was confirmed by Deadline.com and sent immediate shock waves across social media, signaling the coming collapse of Hollywood’s pedo-empire.

Netflix confirms that ‘House of Cards’ will end with season 6, after Kevin Spacey accusation https://t.co/vf3xap3NZ2 pic.twitter.com/TSDMiRW8wD

Despite Netflix’s tendency to closely-guard their viewership numbers, House of Cards was one of their most-watched shows according to independent analysis.

Nominated for a long list of awards including 33 Primetime Emmy Award nominations and 8 Golden Globe nominations, the show’s cancelling marks an ironic collapse of Hollywood’s pedophile “house of cards.”

In recent weeks, catalyzed by the Harvey Weinstein revelations, more and more allegations are surfacing of rampant sexual abuse and pedophilia within Hollywood — a sphere of public life always portrayed as a bastion of “liberalism.”

Kevin Spacey would later respond on his official Twitter account, bizarrely taking the opportunity to also come out as gay, a decision that many people interpreted as a means of deflecting from the allegations:

Judge – “how does the defendant plead to the charge of sexual harassment with a minor?”
Kevin Spacey [lips right on mic] “gay your honor”

Kevin Spacey had 21,279 other days to announce that he was gay. Instead, he waited until the day he was accused of child molestation. 🤔

The following weeks should be very interesting as the PedoGate dam continues to break, sending a flood of horrific sexual abuse claims into the public spotlight.

Is Planet Earth Being Terraformed by Non-Humans? Previous post
After He Flew With Bill Clinton on ‘Lolita Express’ Kevin Spacey Started Group to Groom Child Stars Next post