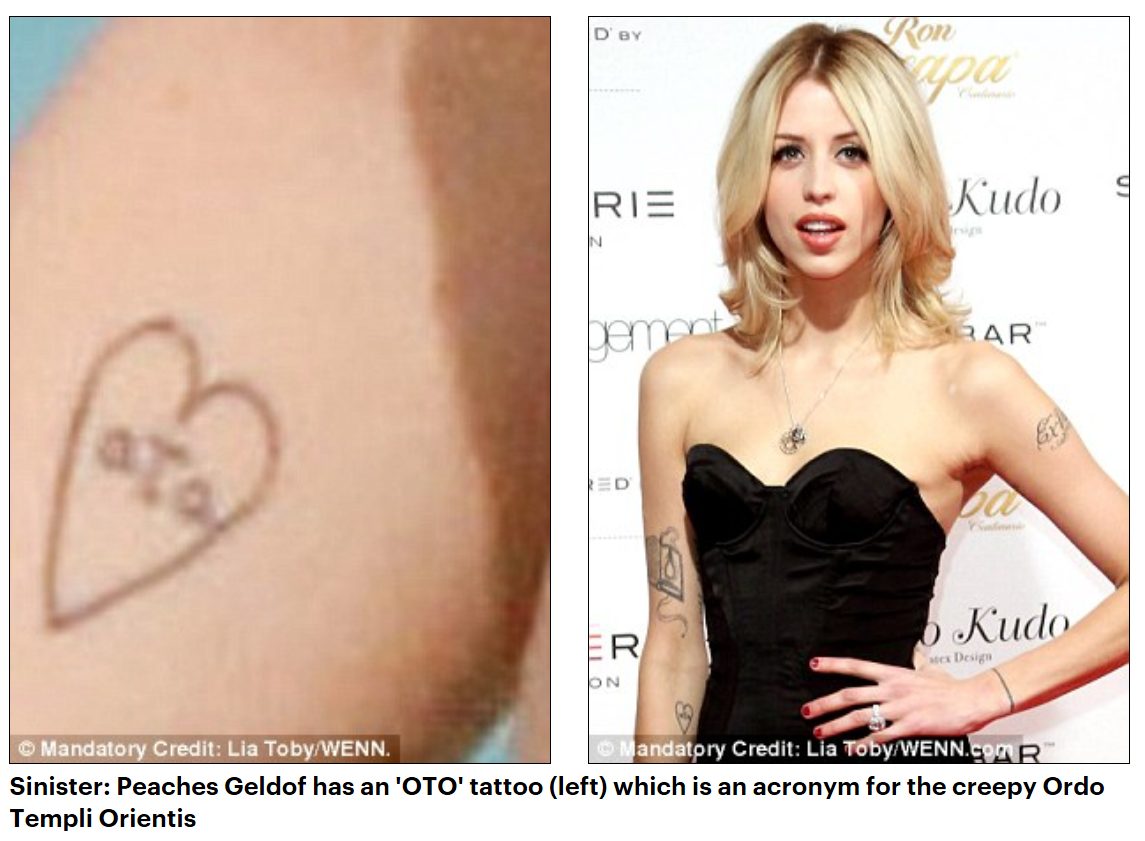 Taken at face value it was an innocent enough remark, encouraging friends to explore ‘a belief system to apply to day-to-day life to attain peacefulness’.

But when Peaches Geldof chose to share her ‘religious’ convictions with her 148,000 followers on Twitter, it lifted the lid on a much more sinister world than first impressions would suggest.

The socialite, 24, is a devotee of Ordo Templi Orientis, known as OTO, and even has the initials tattooed on her left forearm.

Given her tendency to flit between fads and fashions (at one point she was a Scientologist, more recently she has wandered into Judaism), this could be dismissed as another harmless flirtation. 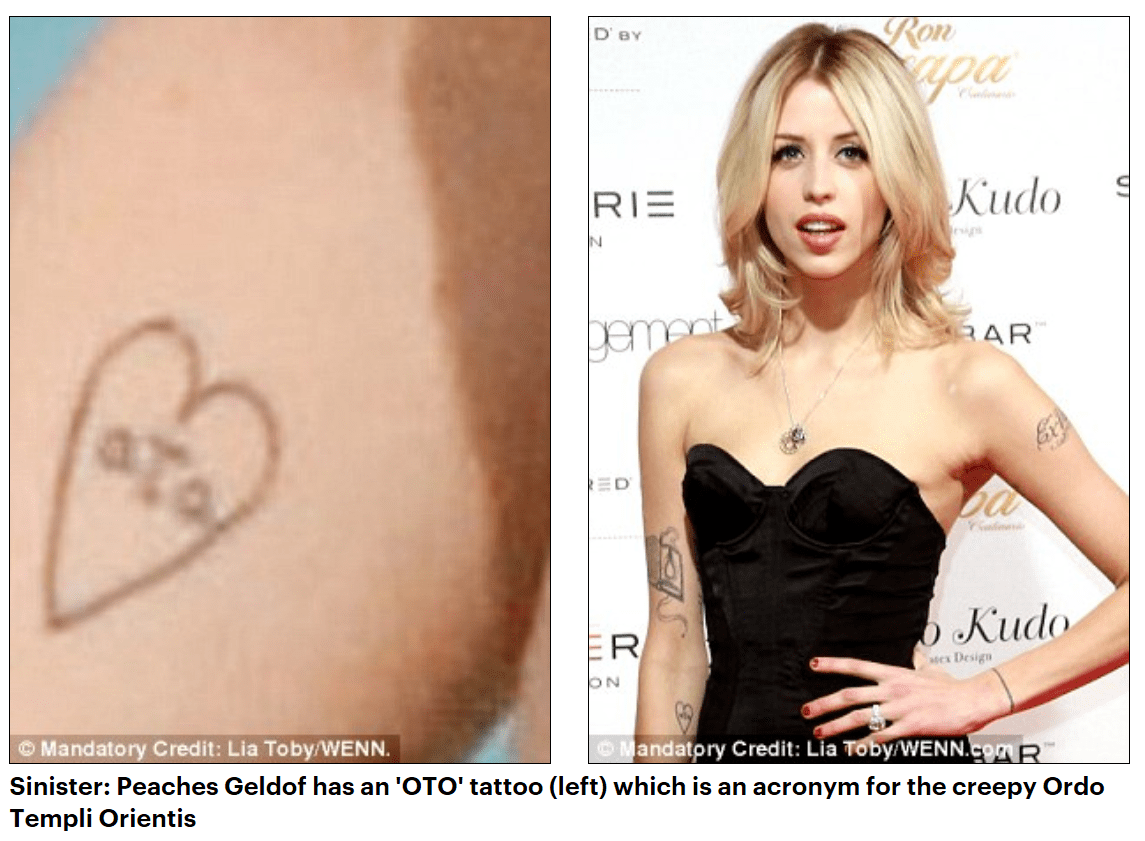 But a closer look at OTO — and Aleister Crowley, its founding ‘prophet’ — gives the lie to that assumption.

Crowley, who was born into an upper-class British family in 1875, styled himself as ‘the Great Beast 666’. He was an unabashed occultist who, prior to his death in 1947, revelled in his infamy as ‘the wickedest man in the world’.

His form of worship involved sadomasochistic sex rituals with men and women, spells which he claimed could raise malevolent gods and the use of hard drugs, including opium, cocaine, heroin and mescaline.

Crowley’s motto — perpetuated by OTO — was ‘do what thou wilt’. And it is this individualistic approach that has led to a lasting fascination among artists and celebrities, of whom Peaches is the latest in a long line.

Led Zeppelin’s Jimmy Page, for example, routinely took part in occult magical rituals and was so intrigued by Crowley he bought his former home, Boleskine House, on the shores of Loch Ness in Scotland.

And there are now OTO lodges scattered around the country, practising the same ceremonial rituals and spreading the word of Crowley.

While membership is secret, Peaches is said to have been initiated into it, raising the prospect that many of her impressionable fans could try to do the same. 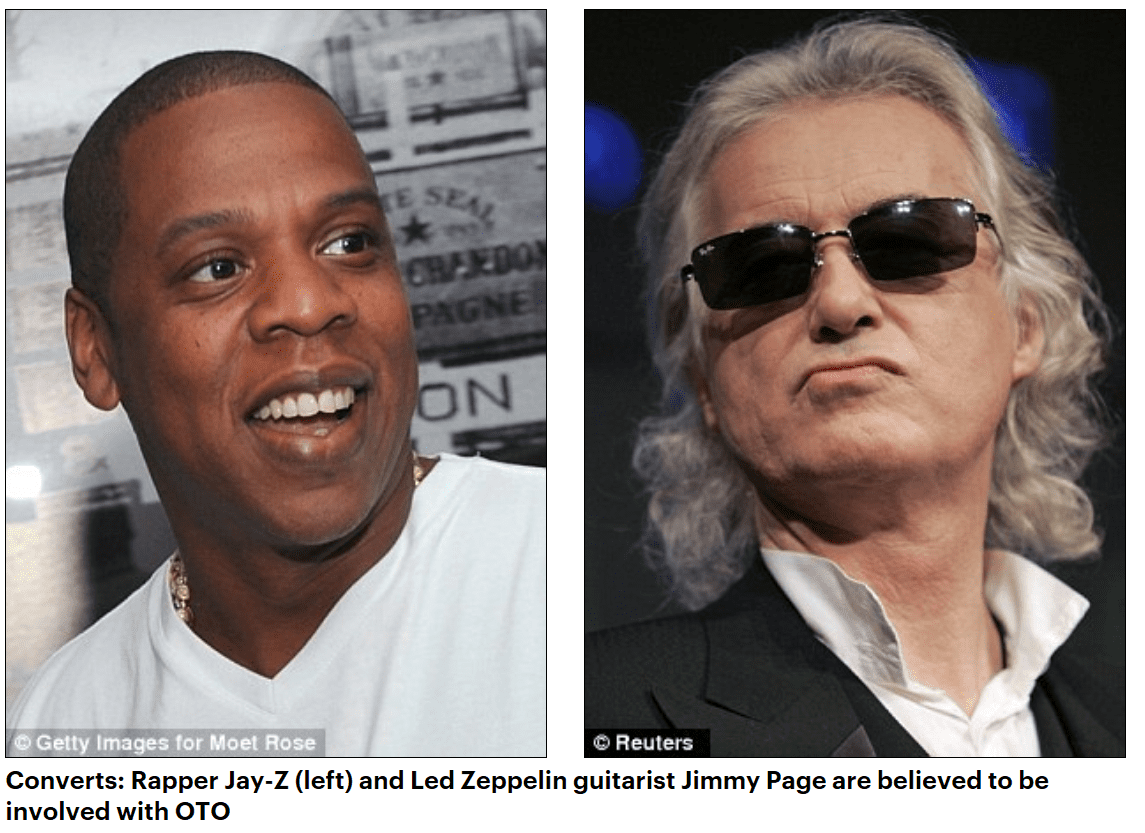 Indeed, when one of her Twitter followers asked how she could find out more about Thelema, another word for Crowley’s teachings, Peaches directed her to read his books, which she described as ‘super interesting’.

Other celebrities linked to OTO include the rapper Jay-Z, who has repeatedly purloined imagery and quotations from Crowley’s work.

His clothing line, Rocawear, is shot through with OTO imagery such as the ‘all seeing eye’ in a triangle, the ‘eye of Horus‘ (an ancient Egyptian symbol frequently referenced in occult texts) and the head of Baphomet (the horned, androgynous idol of Western occultism).

Some conspiracy theorists have seized on this as evidence that he is a member of a secret Masonic movement which they believe permeates the highest levels of business and government.

Others take a more pragmatic view: that it is commercial opportunism, cashing in on impressionable teens’ attraction to the ‘edginess’ of occult symbolism.

Yet OTO is much more than a marketing opportunity for attention-seeking celebs. It is a living religion, with adherents still practising occult rituals set out by Crowley in his books.

This week I tracked down John Bonner, 62, the head of OTO in the UK, to his home in East Sussex. He told me: ‘We are not a mass-appeal sort of organisation  — in the UK we number in our hundreds. Worldwide it’s thousands.’ 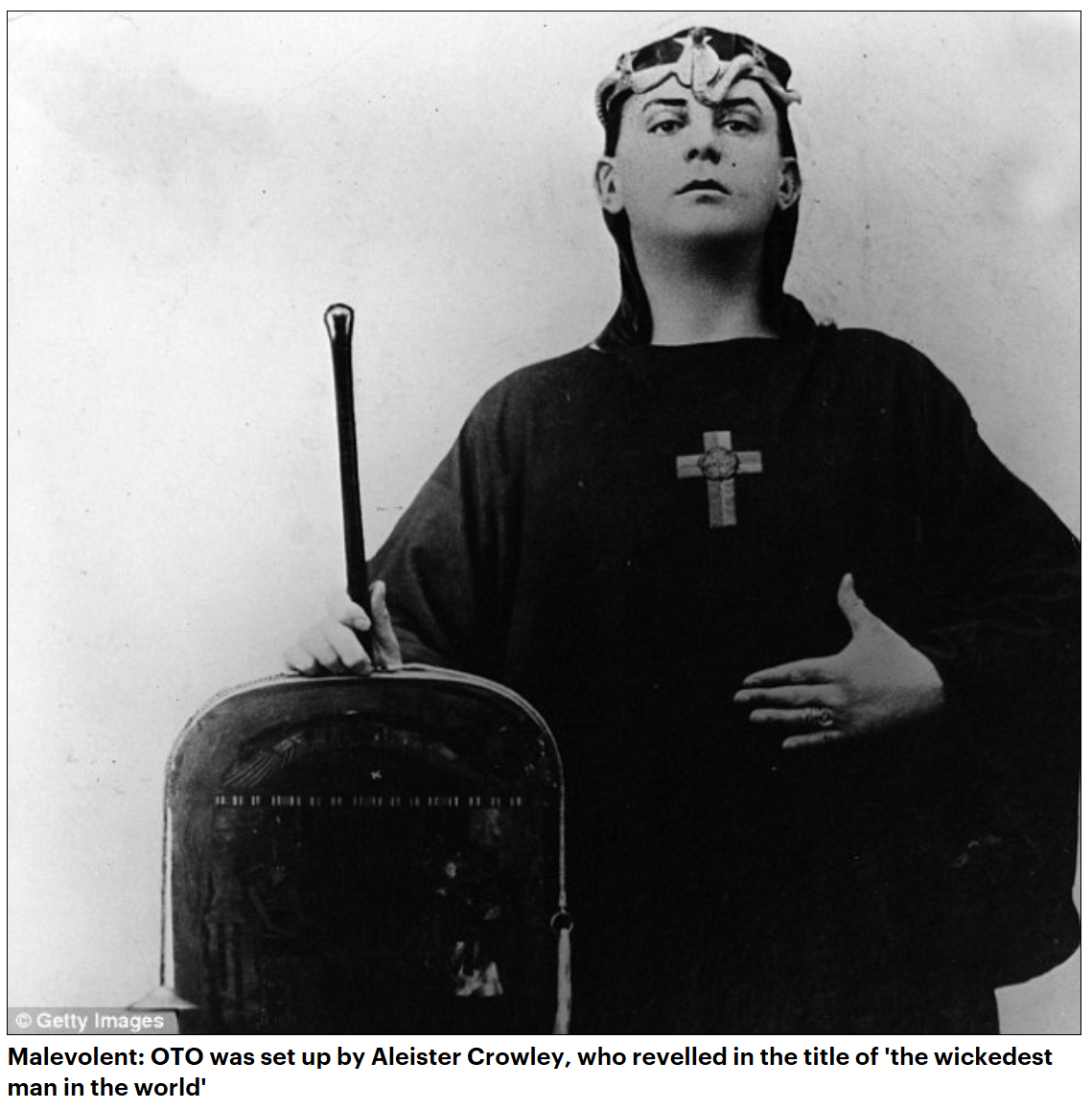 Celebrities are not always a boon or a benefit. ‘We are used to being misunderstood. Many stories about Crowley, like people saying he filed his teeth down into fangs, are nonsense.

‘You could call us a sex cult in a way, because we recognise, accept and adore the whole process which goes towards making tangible the previously intangible.’

According to adherents of OTO it takes years of study before you can begin to understand what the religion is about — much like the equally controversial Church of Scientology.

Bonner takes issue with the comparison, saying it is ‘extremely expensive’ to study Scientology, yet  OTO demands no financial contributions.

Given her own dabbling in heroin and casual sex, particularly during a rootless period when she lived in Los Angeles a few years ago, it is perhaps natural that the troubled offspring of Bob Geldof and Paula Yates should be attracted to such a liberal school of thought.

And if Peaches’ own interest is so shallow, heaven knows what her impressionable — and mostly very young — fans will take from it.

John Bonner is dismissive of any idea that he and his fellow believers would even begin to countenance such excesses, pointing out that his is the only religion that sends people a letter of congratulations when they decide to leave (‘because they are exercising free will, which is what we’re all about’).

But he accepts many people may not be able to deal with Crowley’s complex teachings.

‘You’re not supposed to just jump straight in to it. It takes time and study, but our rituals are not for public consumption. You need to join us and go through the initiation process before you can begin to understand.

‘But according to our beliefs we can’t turn anyone away. So if you are over 18, are passably sane and are free to attend initiations, then you have an undeniable right of membership.’

Peaches Geldof is playing with fire. One can only hope her fans treat this latest pose with the scorn it deserves.

By Richard Price for the Daily Mail

Richard Dawkins Defends 'Mild' Pedophilia, Again and Again Previous post
If We’re Living in a Virtual Reality, Why Care About Anything? Next post