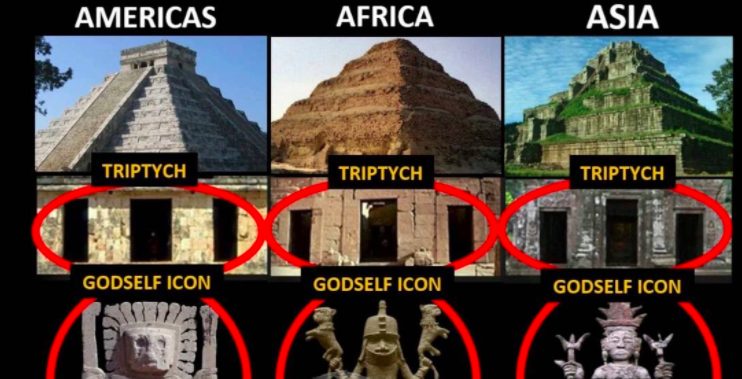 I’ve long been fascinated by Egypt as a possible connection to ancient wisdom and have written about how I see its art as a portal to a connection to consciousness.

Researchers like Graham Hancock have influenced by sense of these connections and point to the possibility of a source “super” civilization that may have had some of its knowledge recorded metaphorically or artistically in places like Central America, Mexico, Peru, India, China, as well as in Egypt.

Graham asserts that “stuff keeps getting older” and makes a strong case for a cataclysmic event that wiped out such a civilization with a comet impact about 12,000 years ago, approximately the time Plato attributed to the decline of Atlantis, which may be much more than a mere myth. 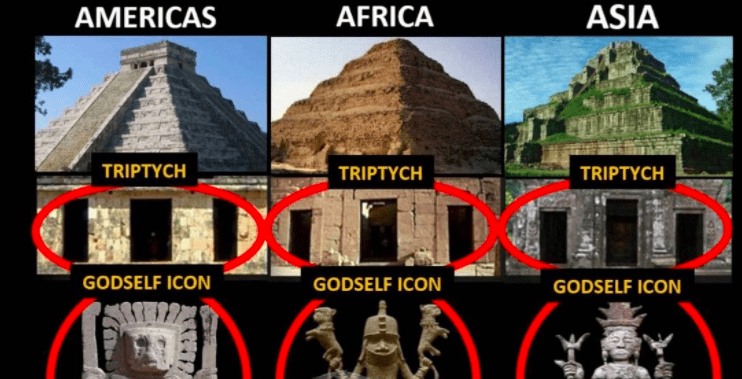 These theories are beautifully and graphically explored in the web series Magical Egypt.

The latest segment proposes that the two “polarities” of Consciousness seem to arise from (or reference) the two hemispheres of the brain.

These are the “dualities” of energetic complementarians — Yin/ Yang, Plus/ Minus, Male/ Female, Hot/ Cold, Night/ Day, Sun/ Moon and so on.

In Episode 4 I was introduced to the amazing work of Richard Cassaro, who is the author of two books that explore deep connections between secret societies and ancient civilizations.

Written In Stone: Decoding The Secret Masonic Religion Hidden In Gothic Cathedrals And World Architecture gives the best account available in print about how religion began and how struggles over the meaning of spirituality shaped the world we live in today.

What struck me deeply — besides the wonderful comparisons of ancient structures from all of these locales and their overlapping, identical motifs, was his focus on the “Godself image.”

This ubiquitous image displays the complementary forces in either hand of a deity, mythical creature, or actual spirit animal with emphasis on the head or disc at the top of the torso.

According to Cassaro this disc is a Third Force — a reconciling or “vertical” dimension that rules over the conflicting forces and presumably “intelligently” creates the result for the potentiality of energies within the expression of THE PRESENT MOMENT.

Cassaro asserts that like modern thinkers such as Eckhart Tolle, ancients believed that time and space are mental projections affected by the sensory limitations of sentient creatures.

The sole connection to a higher dimension that affects us sporadically according to our consciousness and level of being is literally “time-less” — and is experienced only in our lifetimes within moments of complete clarity.

These beliefs can be traced back to Gnosticism and the actual parables of Jesus and again, a “lost Christian” tradition that sought transcendence of the mental realms to connect with a reality beyond thought.

One figure that stands out as a philosophical proponent of ancient Christianity in the modern age is Gurdjieff.

Gurdjieff and his student Ouspensky, author of the classic In Search of the Miraculous, brought a teaching that he hinted came from “Pre-Sand” Egypt — a time which geologists like Robert Schoch have recently identified as more temperate and accounting for the striations at the bases of the Sphinx that were caused by water erosion (hard to imagine in today’s Sahara but possible before the great flood or other cataclysm that might have wiped out a “super civilization” or source culture).

Gurdjieff also asserted a sacred Law of the Threes — three basic forces of Nature that shape our reality — the forces were also:

Gurdjieff had a prayer for these “holy” forces in his own work, Beelzebub’s Tales for his Grandson.

“Holy Affirming
Holy Denying
Holy Reconciling
Transsubstantiate within me for my being.”

In the summary of Gurdjieff’s work linked above, philosopher Jacob Needleman also describes, “the idea of the three centers in man is one of the most central ideas in the whole of the Gurdjieffian system.

Man’s confusion, his lack of unity, his unnecessary suffering, his immorality — in fact everything that characterizes the sorrow of the human condition — come about because these centers of perception are wrongly related, wrongly functioning, and because man does not see or care to know this about himself.”

These three centers relate to the three forces obviously, but again what is striking is that the reconciling force does not “act” in the present moment, but actually, somehow, beyond our normal comprehension literally IS the present moment.

This interpretation seems to be shared by the Gurdjieff teaching, Cassaro’s interpretation of the GodSelf imagery, and the artistic deconstruction done by the producers and other contributors to the Magical Egypt series — which is a study of an ancient science of Consciousness.

It is also known that before bringing his teaching back to Russia, Gurdjieff spent many years in Egypt working as a tour guide at Giza and apparently studying the ancient monuments and texts.

I believe that this also relates to some of my own work because I am so interested in the confluence of DNA code and computer software.

As I have noted here and in my recent book, the notion that there can be code, that can be edited, without Mind as its progenitor is contrary to all actual experience and empirical evidence.

Every other program that we know of is mind-based, as are we.

The key point here is that Mind is not “resident” only in the human brain. It may well be a natural force of nature and indeed the Reconciling or Third force known to the ancients.

Just as some cultures have numerous words for “love” or even “snow” depending upon their beliefs and connection to physical reality, so too may we need to broaden our concept of Mind to accommodate different “frequencies” — some of which may occur in nature beyond our current level of understanding.

For example, the Egyptian “deities” which we consider primitive were actual representatives of the various “intelligences” of Nature worshiped by Egyptians as part of Maat — the Natural Order — such as the floods that irrigated crops, wind, sandstorms, Sun and Moon and their radiant energy, and so on.

I also cover this in my book, If DNA Is Software, Who Wrote the Code?, which is now available on Amazon.