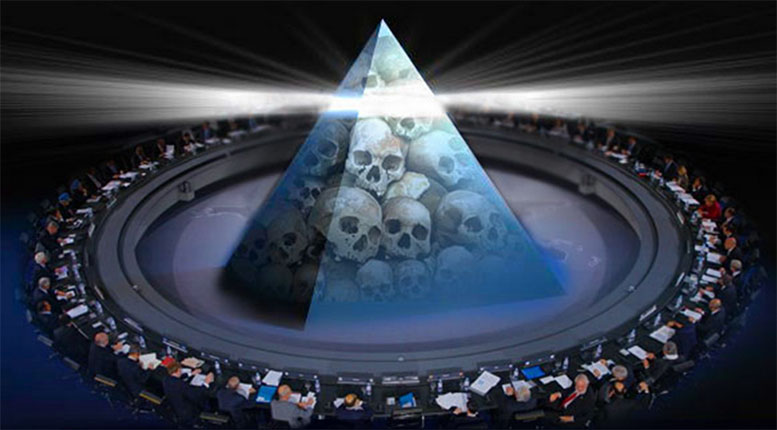 If ever there were doubts about so-called “conspiracy theorists” reports regarding world population reduction plans and efforts, you now can put them aside and take a long-over-due reality check on what’s been in the works since the early 1970s under the “tutelage” of none other than globalist Henry Kissinger!

Mr. Kissinger is Jewish; didn’t he learn anything about Adolf Hitler’s attempted reduction of the Jewish race? Shame on you, Mr. Kissinger!

The main testament to the globalists’ population controls plans for reducing humanity literally were set in stone in the 1980s, i.e., granite monoliths known as the Georgia Guidestones, whose first “new commandment” of the New World Order is: 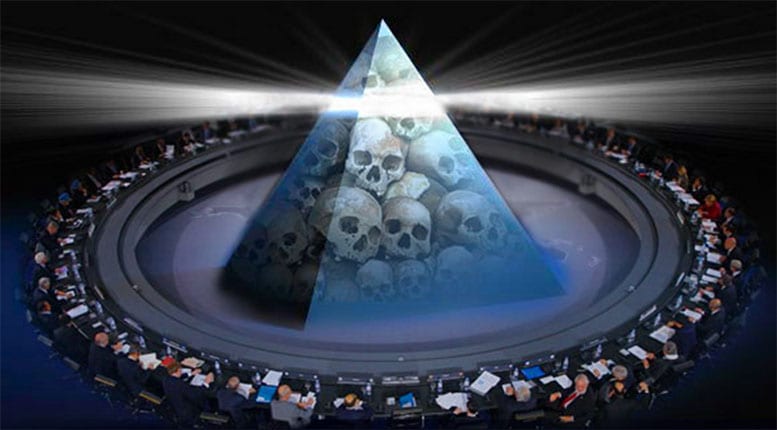 Maintain humanity under 500,000,000 in perpetual balance with nature.

Folks, that’s half a billion humans, whereas the Planet’s current population is 7.6 BILLION, which means a heck of a lot of us have to be “offed” the planet using some means — deleterious or otherwise, which probably will come in the way of weaponized diseases from technology “advances” which unbelievably gullible people accept as their god — a reality the NWO elites want desperately to be accepted: Technology/science is god.

The world’s controllers, collectively called the “Illuminati,” include many pedophile government officials in all countries, especially the USA and the UK, and groups like the Bilderberg, the Bohemian Grove crowd, secret societies and other control freaks who want to recreate humans into their idea of a “better race” of cyberborgs [an alien-robot mix?] or transhumans who have computers in or for brains and can be programmed to believe and act as automatons ‘built’ by technology but with man-made souls!

That’s the plan, folks, and you can take it to the bank, as they say.  I’ve been researching this sick plan for quite a while and it’s getting out of hand, I think.

Below is a 123-page declassified document that discusses “Implications of Worldwide Population Growth For U.S. Security and Overseas Interests,” which ought to open eyes, minds and thinking, in my opinion.

Folks, it doesn’t get any clearer than that; does it?

Nothing, absolutely nothing, confirms those fertility decline efforts than what took place in Kenya, Africa, as discovered and reported by the Catholic Bishops regarding infertility subterfuge contained within the tetanus toxoid jjab injected into 500,000 females of child-bearing age!  That is neither hearsay nor conjecture, the proof is here.

In November of 2014, the following happened:

“Kenya’s Catholic bishops are charging two United Nations organizations with sterilizing millions of girls and women under cover of an anti-tetanus inoculation program sponsored by the Kenyan government.

“According to a statement released Tuesday by the Kenya Catholic Doctors Association, the organization has found an antigen that causes miscarriages in a jjab being administered to 2.3 million girls and women by the World Health Organization and UNICEF. Priests throughout Kenya reportedly are advising their congregations to refuse the jjab.

“We sent six samples from around Kenya to laboratories in South Africa. They tested positive for the HCG antigen,” Dr. Muhame Ngare of the Mercy Medical Centre in Nairobi told LifeSiteNews. “They were all laced with HCG.”

“This proved right our worst fears; that this WHO campaign is not about eradicating neonatal tetanus but a well-coordinated forceful population control mass sterilization exercise using a proven fertility regulating jjab. This evidence was presented to the Ministry of Health before the third round of immunization but was ignored.”


“The world today [2010] has 6.8 billion people… that’s headed up to about 9 billion. Now if we do a really great job on new jjabs, health care, reproductive health services, we could lower that by perhaps 10 or 15 percent.” — Billy Boy

How do you lower population growth with new jjabs, health care and reproductive health services if sterility, anti-fertility, or some other reproductive-prevention “mechanism” is not willingly built into the healthcare system under the guise of “wellness,” since most people would decline their inability to being able to have children?

China went the route of denying more than one child per couple, and we know what China’s repressive communist government has been regarding human rights. Is that the NWO’s proposed or projected global plan for population growth and one-world-governance is?

Is Something Going On In The USA?

In the USA something even more sinister seemingly has happened with the apparent ‘blessings’ of federal and state health agencies colluding to enforce mandatory jjabs, many of which contain anti-fertility chemicals such as polysorbate 80, aka “Tween 80”.

Vaccine adjuvants such as squalene and aluminum in four formulations can/may play roles to provide sterility by causing autoimmune diseases. One particular genre of jjabs, the HPV (human papillomavirus jjab) is notorious for causing serious debilitating health problems in young girls receiving those jjabs prior to menarche.

Health issues for teens have included teen-age menopause, hormone disruption and loss of function and ability to move! See SaneVax for a comprehensive report on the HPV jjab horrors.

All one needs to do is examine the CDC’s Vaccine Excipient & Media Summary to find the numerous jjabs containing apparent infertility ingredients of one form or another, or probable contributory chemical-pharmaceutical aspects to health issues preventing either copulation or conception due to inability to act/ perform or ‘hidden’ chemical castration via jjabs, in my opinion as a jjab information researcher since the mid-1980s.

Most, if not all, jjabs given to infants, toddlers and teens contain polysorbate 80/”Tween 80”, formaldehyde/ Formalin, aluminum in some chemical form, Thimerosal/ ethylmercury, and human diploid cells, which are several lines of aborted fetuses cells that can cause what may be a contributing factor to autoimmunity: homologous recombination.

Then there’s the new ‘kid’ on the jjab block: genetically modified-produced nanoparticles, which are “trade secrets” that enable jjabs to be “tweaked” and patented, while probably not known even to the CDC/FDA licensing investigators  nor listed in the CDC’s Pinkbook of Excipients and Media nor in each jjab package insert.

Then there’s the most prominent evidence to date of issues regarding population control, in my opinion: Children’s health status in the USA is at an all-time low and they are not expected to live as long as their parents, whereas mandatory jjab compliance is near an all-time high per 2016 data for children aged 19 to 35 months:

Probably the most dramatic of all statistics is the emerging fact that in the USA, Autism is now one in 36! And it affects males four times more frequently than females, which means those males will have neither the knowledge, ability nor desire to mate and to reproduce!  Automatic depopulation control?

According to an Autism Action Network recent (February 2018) email:

“This catastrophic news was greeted with complete silence by the federal government, the major media, and the largest autism organizations. Neither Autism Speaks nor the Autism Society of America found the results worthy of a press release.”

If anyone thinks mandatory jjabs are for preventing health problems, please think again!

They can prevent fertility with their built-in neurotoxic chemicals, which no human should be subjected to receiving at any age from birth to death. Mandating receiving such health-harming and deprivation- of-reproduction chemicals is nothing short of crimes against humanity and child abuse at every stage of childhood! What do you have to say about that Child Protective Services?

All the above may sound like fiction I took upon myself to create. Well, the above declassified Kissinger Report on Population Growth ought to have parents and everyone with some sense of understanding hopping mad about what’s been pulled over their eyes under the guise of preventing illness!

In reality, many jjabs shed jjab actives for up to three weeks after a person is vaccinated; shouldn’t they be quarantined for that long so as not to spread disease?

The CDC and FDA are notorious for their fraudulent research and reports, which they send out to the world and World Health Organization as “fact” but are nothing short of deceptive Big Pharma propaganda to implement the apparent Rockefeller-agenda’s/ Big Pharma world population reduction efforts under way for many decades, but geared up legally at least in the USA, by the mandatory jjab program, which Congress only compounded by the 1986 jjab law, which needs to be rescinded immediately, if not sooner!

The Global Strategy a la Kissinger

Below is proof from the Kissinger Population Report, which ought to make everyone stand up and demand action not only in the USA, but globally. Do you want your country to become another Kenya, Africa?

“In the LDCs, although 31 countries, including China, have national population growth control programs and 16 more include family planning in their national health services ── at least in some degree — the commitment by the leadership in some of these countries is neither high nor wide.

“These programs will have only modest success until there is much stronger and wider acceptance of their real importance by leadership groups. Such acceptance and support will be essential to assure that the population information, education and service programs have vital moral backing, administrative capacity, technical skills and government financing.” — Source: V. Action to Develop World-Wide Political and Popular Commitment to Population Stability (PDF.usaid.gov)

If the New World Order control-freak crowd didn’t interfere by implementing its methodologies for making money, fiat currency, and ripping off consumers via technology, plus interfere with Nature’s food production by introducing genetically modified ‘phood’s [1], which literally are a bust for farmers and do not increase food supplies but only aggrandize the 1% elites portfolios, PLUS the introduction of weather modification which the U.S. government military wants to “own” by 2025 [2] and all the Solar Radiation Management (SMR) chemtrails, Mother Earth — the Planet — could and would take care of itself.

After all, the Planet has been doing that for billions of years and there were no NWO control freaks or mad scientists around to tell Nature how to do it and/or interfere with doing it!

It’s time to go back to Nature and let the plan of Nature and Creation unfold in all its glory as it has brought us to this point before technology screwed up everything in order to control the Planet and its population.

We no longer can be controlled by the sordid control mechanisms of apparently mentally sick people whom others think are genius and vote into power and control.

Cancer Is Not What You Think It Is: Busting the Myths (Part 2) Previous post
Senator Nancy Schaefer Was Murdered Because She Fought Against CPS Child Kidnapping Next post