The suspect in a mass shooting that killed 17 people, was reported to the FBI months ago for making comments on YouTube saying, “I’m going to be a professional school shooter.”

As the public searches for answers about why suspected gunman Nikolas Cruz opened fire on his classmates and teachers at a high school in Parkland, Florida, his social media history is making one thing clear — the Federal Bureau of Investigation should have seen the warning signs months ago.

“I’m going to be a professional school shooter,” A YouTube user named Nikolas Cruz commented on a video on Sept. 24, 2017. The video was posted on the channel “Ben The Bondsman,” and the owner, Ben Bennight, immediately took a screenshot and submitted it to the FBI.

Bennight told Buzzfeed News that the bureau was quick to respond, and agents from the Mississippi field office conducted an in-person interview with him the next day.

“They came to my office the next morning and asked me if I knew anything about the person,” Bennight said. “I didn’t. They took a copy of the screenshot and that was the last I heard from them.” 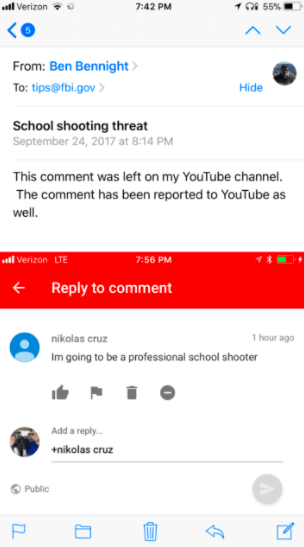 The next time the FBI contacted Bennight was on Wednesday, just 30 minutes after police in Broward County arrested a suspect with the same name as the YouTube user — Nikolas Cruz — for killing 17 people and injuring at least 15.

“I think we spoke with you in the past about a complaint that you made about someone making a comment on your YouTube channel. I just wanted to follow up with you on that and ask you a question with something that’s come up, if you wouldn’t mind giving me a ring.”


But that one comment was not the only warning. Seven months ago, Cruz wrote:

“I am going to kill law enforcement one day they go after the good people,” in the comments section of a video clip from the NatGeo show “Alaska State Troopers: Armed and Dangerous” that was posted on YouTube.

Then six months ago, he commented on a YouTube video titled, “Antifa Gun Club,” writing, “Im going watch them sheep fall f*ck antifa i wish to kill as many as i can.”

Cruz’s Instagram account also contained questionable content, including a number of photos of him brandishing guns and knives, and showing off small animals and rodents he had killed.

#BREAKING: The shooter’s Istagram accounts have been taken down. (@browardsheriff said they’re investigating his social media.) I’ve seen video of what appears to be shooter’s IG before it was removed. Here are few screen grabs. Look closely.#ParklandShooting#StonemanShooting pic.twitter.com/1TpJlYl58E

Former classmates have said they were not surprised by the shooting or the fact that Cruz is the suspect. Joshua Charo told the Miami Herald that Cruz fit the description of a disgruntled student who would carry out a mass shooting.

“I can’t say I was shocked,” Charo said. “From past experiences, he seemed like the kind of kid who would do something like this.”

John Crescitelli shared the same sentiment, saying his son had warned him about Cruz before.

“If you were to pick one person you might predict in the future would shoot up a school or do this, it would be this kid,” he said.

Family members of Nikolas Cruz also claimed that he has been taking medication for depression and emotional issues for several months. Given the social media posts and comments from the individual who has been described as a “troubled teen,” it is becoming clear that the FBI should have seen the warning signs months ago.

The same bureau that cost American taxpayers more than $9 billion in 2017, failed to use its unlimited access to invade the privacy of innocent citizens to actually make a difference by thoroughly monitoring the individual who shared his longing to become a “professional school shooter” nearly five months ago.

In doing so, the FBI should be held accountable for the reckless role it played in preventing the murder of 17 innocent individuals.

All the police state measures in place — and a warning from the actual shooter — and the US government’s unlimited surveillance state did nothing to stop what appears to be an entirely preventable mass shooting.

Lauda Describes Vibrating High Enough To Walk Through A Wall When She Was A Child Previous post
McDonald's Sells A Massive 150,000 'McVegan' Burgers In One Month Next post