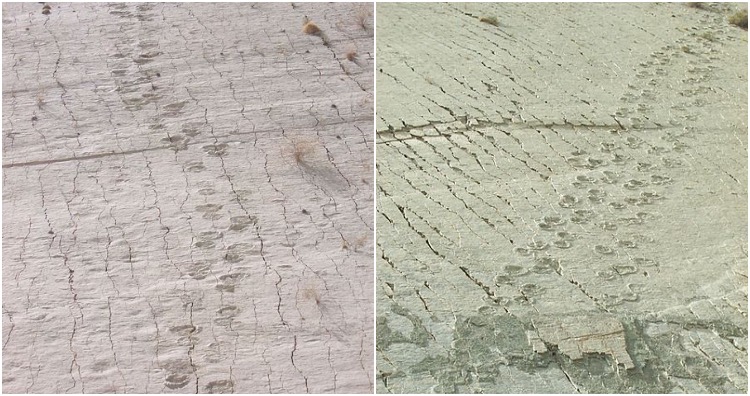 Limestone Wall in Bolivia Has Over 10,000 Dinosaur Footprints Belonging to 10 Different Species

Cal Orcko is a small town that is situated three miles south of the city of Sucre in Bolivia. It is home to the largest and most spectacular collection of dinosaur footprints of the Cretaceous era.

Even though the site remained closed for almost eight years after this paleontological discovery, it has been opened for visitors now.

A 300-foot-long limestone wall is located in Cal Orko, Bolivia, that has over 10,000 dinosaur footprints etched on it. The footprints belong to approximately 10 different dinosaur species that walked the earth about 68 million years ago.

A 1.2-kilometer-long and 80-meter-high wall exists in Bolivia’s Cal Orko. The wall is a limestone slab that dates back to the dinosaur era. 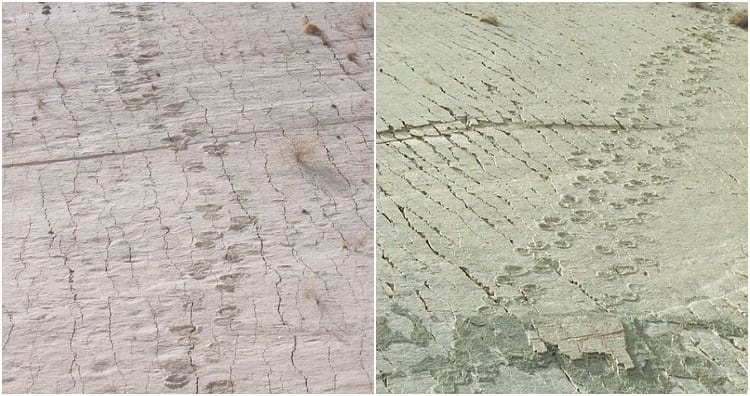 It is covered with numerous dinosaur tracks that experts believe belong to approximately ten different species of dinosaurs. Currently, more than 10,000 individual dinosaur footprints have been identified on the limestone wall.

Christian Meyer, a Swiss paleontologist, once commented that in 1998, they were able to recover only around 3,000 dinosaur tracks. Then in 2007, the number of footprints rose to 5,000, and in the latest survey, they have encountered over 10,000 individual dinosaur footprints in the limestone slab.

The most prominent tracks on the limestone wall are those of the quadrupedal titanosaurs. The tracks of the bipedal, carnivorous dinosaurs can also be found across the entire wall.

Other dinosaur species who footprints were found on the wall include the theropods, ornithopods, ankylosaurs, and quadrupedal ornithopods.

The wall gives an impression that the dinosaurs were walking vertically. But in reality, the wall was originally the floor of a shallow lake from the Cretaceous period. It was due to tectonic movements that the floor became vertical.

Since the limestone slab is almost vertical, it gives the impression that the dinosaurs were walking vertically, like lizards on a wall. But experts have provided a more logical explanation. The limestone slab was originally the floor of a shallow lake of the Cretaceous era that once flowed through South America.

According to geologists, the floor of the lake has moved several times as the result of tectonic plate movement. Sixty-eight million years ago, the floor was walked upon by hundreds of dinosaurs leaving behind their footprints in the process.

The unique climate fluctuations at Cal Orko, Bolivia is believed to be the reason behind the spectacular presence of paleontological remains.

Why is it that there is a such a concentration of dinosaur remains in this area? Experts believe that it has something to do with the unique climatic fluctuations of the area. The large feet of the dinosaurs sank into the mushy shoreline of the lake that used to exist there.

When drought hit the area, the tracks solidified. Wet weather returned once again and sealed the footprints below layers of sediment and mud. Experts believe that this wet-dry pattern was repeated as many as seven times which led to the prints getting preserved on the floor of the lake.

And the best part was that tectonic activities shifted the floor into a vertical viewing angle, enabling this wonderful paleontological spectacle to be viewed by the species that continued living on this planet after the dinosaurs.

The Cal Orko Parque Cretacico that hosts a museum, models of dinosaurs, fossils, and related paleontological information offers a guided, one-hour tour to a few selected areas of the dinosaur footprint wall.

Today, guided tours are offered to visitors to get a glimpse of the dinosaur footprints. Visitors are provided a helmet as a safety requirement because of the cement factory that is located near the wall.

The guides point out the footprints of the Theropods (carnivorous dinosaurs) and Sauropods (long-neck herbivores). Lengths of the footprint trackways range from 26 feet to as long as an amazing 65 feet.

This amazing limestone slab serves as a record and offers a glimpse on the ever-changing history that took place in the Cretaceous era.

How Do Soulmates Connect? Previous post
Brian Shaffer – The Man Who Vanished while Surrounded by Cameras Next post