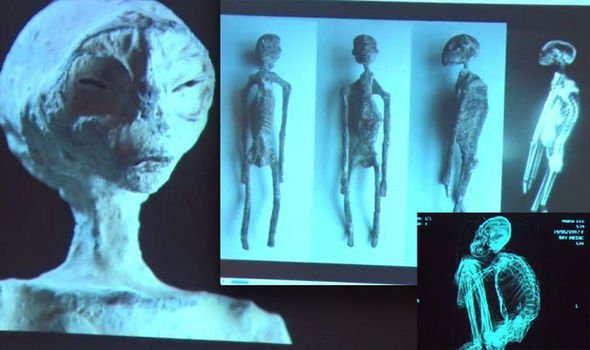 New DNA Updates On The Potential Alien Body Found In Nazca, Peru (It’s Not Fake And Not Human)

Recently Nazca, Peru has become famous for those who like to peer into the world of unsolved mysteries. Take for example, the Nazca Lines, a series of large ancient geoglyphs ranging in size, with the largest being 1200 feet long.

The world is full of interesting unsolved mysteries that question what we think we know about human history and new discoveries are constantly being made, many of which receive very little attention.

This really goes to  show just how little we know of human history and how new discoveries show us that there are so many variables that we really need to take into consideration when contemplating our true origins. There are still many questions which remain unanswered.

A new discovery has been made in Nazca, Peru. If you haven’t already heard, multiple mummies have been unearthed, real organic bodies. Their anatomy is quite strange, and differs greatly from that of a human. 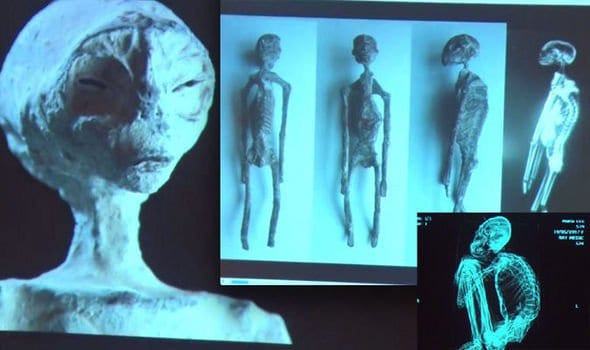 The beings are humanoid and have three fingers and three toes on each hand. They also have a distinctly different shape of skull compared to modern-day humans and those who roamed the Earth before we did.

This is also interesting because three-fingered beings are depicted in ancient petroglyphic drawings that have been found in Peru.

Now, before we go any further, we have to address the ‘alien issue.’ When the news came out about these strange bodies being unearthed, Snopes instantly labelled the story as fake news, specifically because it contemplated the idea that they could be alien bodies.

How does this make it fake news?

They (Snopes) did not even acknowledge the fact that these were indeed real bodies, they simply ridiculed the story because it had an ‘alien’ tone to it. They also ridiculed the researchers involved, as what seemed to be an attempt to further discredit the story.

As a result, many people believed that the bodies were not found at all, which is not true.

Secondly, is it really far off to contemplate that these beings could be alien? With all of the evidence and information that’s been released over the years regarding UFOs, and their potential extraterrestrial origin as well as various interpretations of ancient history, it’s really not at all that “out there” (no pun intended) to question. We will get to why later in the article.

But let’s get back to the bodies. One of them was named Maria, she’s a 5th century woman who predates the arrival of the Europeans to America. So far, scientists have shared their belief that she belonged to a race that was wiped from Earth due to some climate catastrophe, like a flood or a comet strike.

Maria isn’t the only one, scientists are also studying a mummy that is believed to have been nine-months old at the time of death, they have called it Vavita. Four other male mummies were also found.

Who are these scientists? One of them is Dr. Konstantin Korotkov, a professor of Computer Science and Biophysics at Saint-Petersburg Federal University of Informational Technologies, Mechanics and Optics. He is also a researcher at the Russian National Research University.

“We have a very important mission here in Peru. I came here because of this group of scientists, professionals, [and] journalists.” When they brought out the body and “pulled it out of the box, it was a stunned silence at first.”

Another one is Natalya Zaloznaya, a radiologist and specialist in computer tomography at the International Biological Systems Institute. She was also in Peru collecting tissue samples to bring back to St. Petersburg for analysis.

Again, there are many. Below is another one pictured analyzing preliminary results which showed that:

“This body is a real body, that was once alive. For example, here we have the teeth from the upper arch, and here are the ones from the lower arch. The skull with the remains of brain mass, this part here shows the lungs at the side. This is the heart, with the bronchus, and the great vessels, lungs at both sides. This is still the heart, and here are the four cavities, and the bronchi that are preserved.” 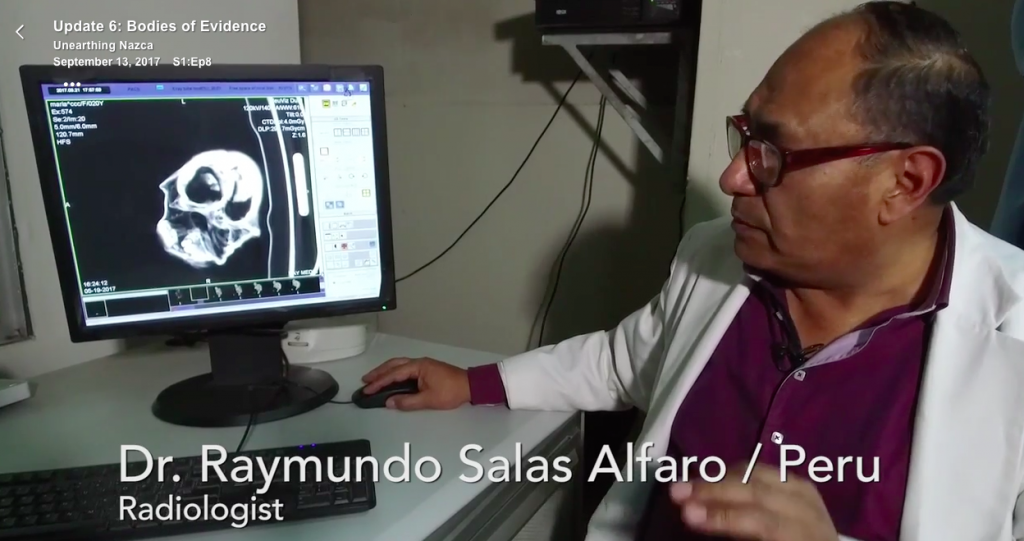 They also show the intestines and abdomen, and that the placement of the internal organs is “completely harmonious.”

So far it seems that “initial examinations suggest the possibility of a species unlike anything found in the fossil record.”

Early DNA results of the mummy, named “Maria,” show that she is female, and that the other bodies found alongside her, which look to be a spouse and a couple of children, are also real, biological bodies. Some of their organs are actually still intact.

Further testing was done on one of the strangest aspects of these bodies, their fingers and toes, and has shown that these parts are not fake, ruling out any possibility of a hoax. They’re the same material, the same chemical composition, and the same DNA.

The samples taken from Maria’s fingers matched the date of her body, which is approximately 249-411 AD. Carbon dating, and an analysis of the structure of the body via CT scan and X-ray, proved it was real. 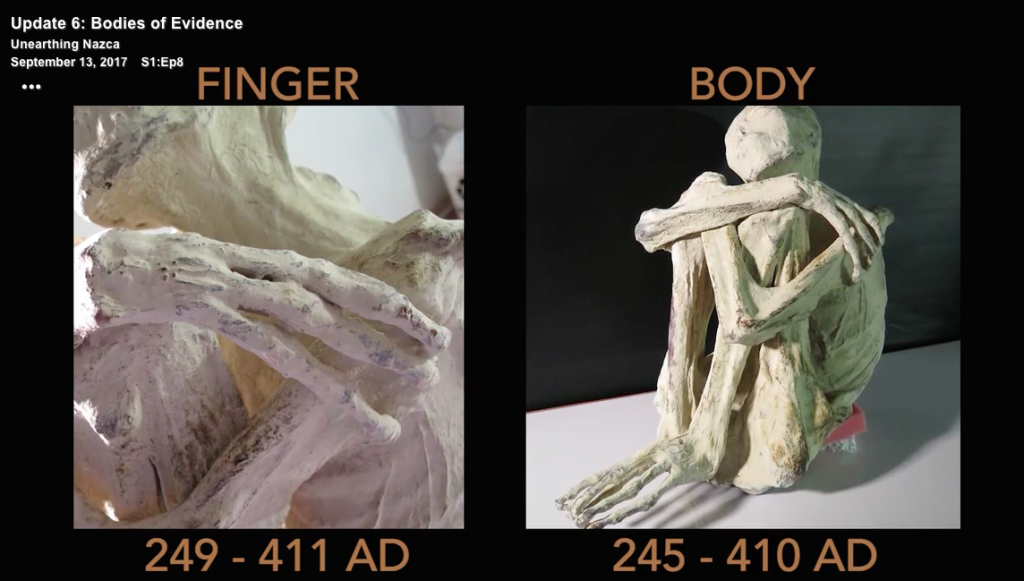 Researchers have now collected tissue samples in Peru and have brought them back to Russia to study. They’ve found that the mummies – with elongated heads and three fingers on each hand, actually have 23 chromosomes that appear to be human, but again, the bodies differ than that of human anatomy.

“Right now, we are making a detailed analysis to see if the shape of the position of all the chromosomes, of all the amino acids, coincides with ours,”

The professor went on to emphasize to IB Times that:

“Each of the little mummies has two arms, two legs, a head, pair of eyes and a mouth. Tomographic scans reveal their skeletons. The tissue has biological nature and their chemical composition indicates that they are humans… Their DNA features 23 pairs of chromosomes, just like we have. All the four of them are males, each with a Y-chromosome.”

He also made it a point to say that, “They appear human but they are not. Their anatomic structure is different. They could be extraterrestrials or bio robots.”

He also said that they could very well belong to an ancient Earth tribe, and we could be seeing a completely new species, one of many, that can be added to the mystery that is Earth’s history.

Where would these beings fit into the current story of human evolution? There are so many questions, missing links and more that really put our current theories into question.

X-ray and computer tomography also showed that Maria has a very different rib structure to that of humans. Keel-shaped in the upper part with a handful of semicircular ribs, the cage protects the creature’s internal organs, which also resemble those of humans. 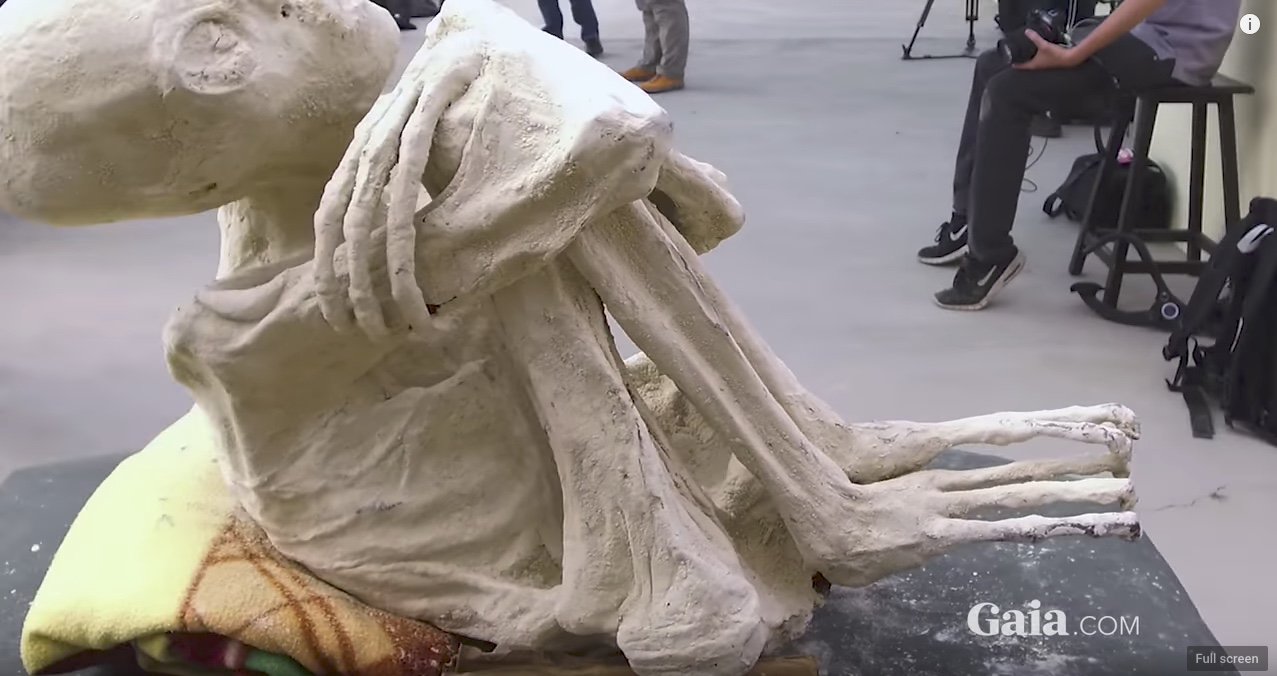 Scientists also found Maria was embalmed in a cadmium chloride white powder, the antibacterial effect of which has preserved Maria to this day.

As you can see, DNA testing alone cannot really determine where these beings come from, and whether or not they originated on Earth. Most likely, they did, but it still doesn’t rule out the possibility that they are from another planet.

Back To The Alien Question

“They appear human but they are not. Their anatomic structure is different” said Korotkov.

There are some important points which give more credibility to this assumption, and the main one is the idea that we ourselves are the extraterrestrials, as Apollo 15 astronaut Al Worden stated in a recent interview:

“We are the aliens, but we just think they’re somebody else, but we’re the ones who came from somewhere else. Because somebody else had to survive, and they got in a little space craft and they came here and they landed and they started civilization here, that’s what I believe. And if you don’t believe me, go get books on the ancient Sumerians and see what they had to say about it, they’ll tell you right up front.”

His comments differ significantly from Dr. Edgar Mitchell’s, who said he “happens to be privileged enough to be in on the fact that we are not alone on this plant ” and that we have “been visited many times.”

As far as humans coming from space, Worden is not the only one who has brought forth this theory.

Francis Crick Watson and Maurice Wilkins were jointly awarded the 1962 Nobel Prize for Physiology for Medicine “for their discoveries concerning the molecular structure of nucleic acids and its significance for information transfer in living material.”

He was clearly a brilliant scientist who unfortunately, like many other brilliant minds who came up with theories that challenged the accepted frameworks at the time, wasn’t given much ‘press.’

In his book published in 1982, Life Itself, he argues that there is no possible way that the DNA molecule could have gotten its start here on Earth and that it had to have come here from somewhere else, off the planet.

According to Francis, we are the result of what is now known as Directed Panspermia. Crick and a British chemist, Leslie Orgel, published their paper on it in July of 1973.

Their theory explains that, “organisms were deliberately transmitted to earth by intelligent beings on another planet. We conclude that it is possible that life reached the earth in this way, but that the scientific evidence is inadequate at the present time to say anything about the probability. We draw attention to the kinds of evidence that might throw additional light on the topic.” (source)

Another reason why it’s not so far-fetched to assume that these bodies discovered in Peru could be from another world is that modern-day encounters with supposed extraterrestrials lend belief to the idea that there are quite possibly, multiple humanoid races, some which are identical to human beings, traversing the universe. If this is true, perhaps our DNA would be quite similar, if not exactly the same, as them.

This is why, if we ever hear that these beings are a 99 percent DNA match, it does not negate the extraterrestrial hypothesis, even if it was 100 percent, it still doesn’t, despite the fact that there is also a good chance that these beings do and did originate on Earth.

Regardless of where they’re from, the finding is huge as we are looking at a species which has been completely left-out of the fossil record. It’s a completely new species.