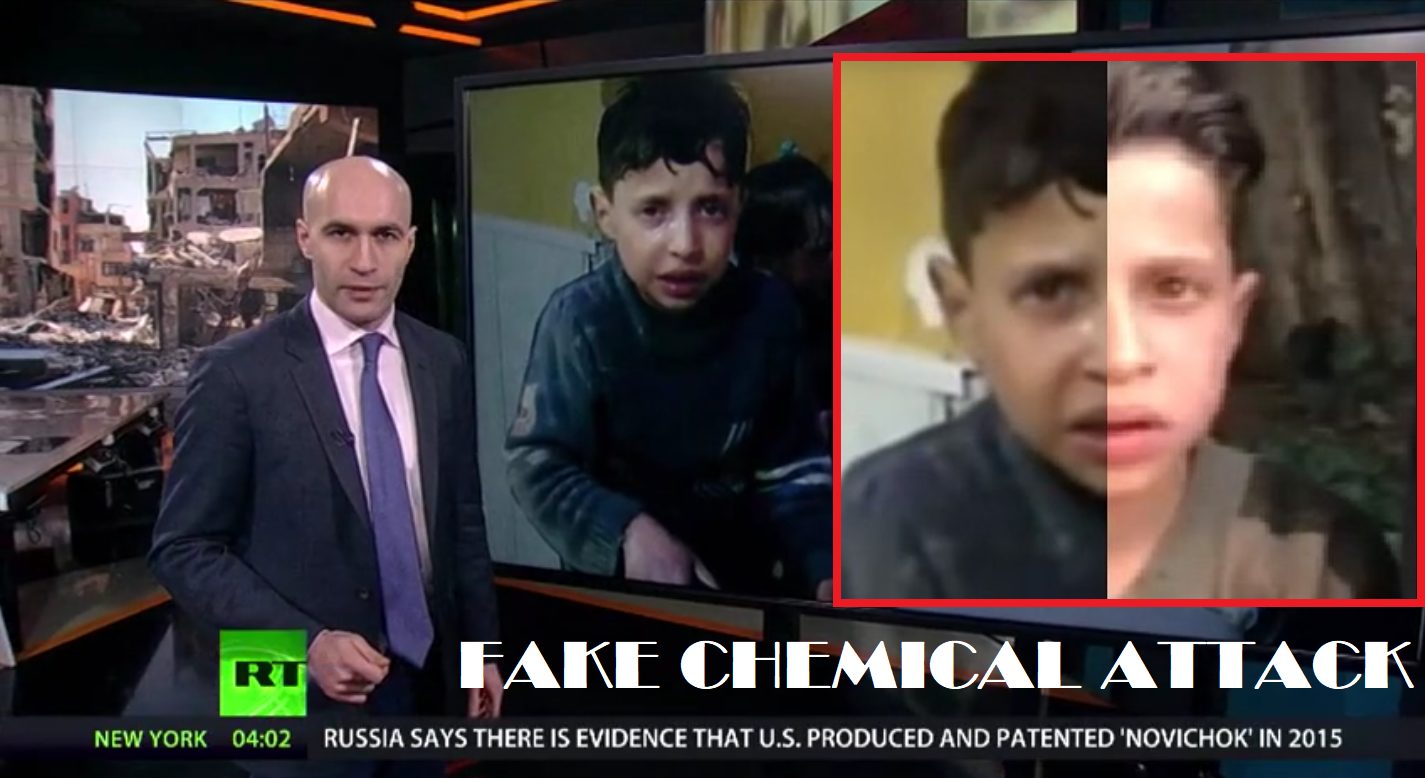 Boy in White Helmets FAKE Chemical Attack Video: I Was Lured to the Hospital, Then Sprayed With Water

(RT News) The boy portrayed as a ‘victim’ in a video of the alleged chemical attack in Douma has told a Russian TV crew that he was asked to go to hospital, where people “grabbed” him and started “pouring water” over his head.

Panic, fear, screaming adults and frightened children featured in the purported footage of the aftermath following the alleged chemical attack in the Eastern Ghouta city. The video has been circulated by mainstream media since April 7 after being posted by the so-called Douma Revolution group.

The group is one of the organizations, along with the notorious rebel-linked White Helmets, that has claimed government troops were the culprits behind the reported chemical attack.

One of the main ‘characters’ in the footage is a soaked boy, who is seen being sprayed with water by people who claim to be ‘rescue workers.’ 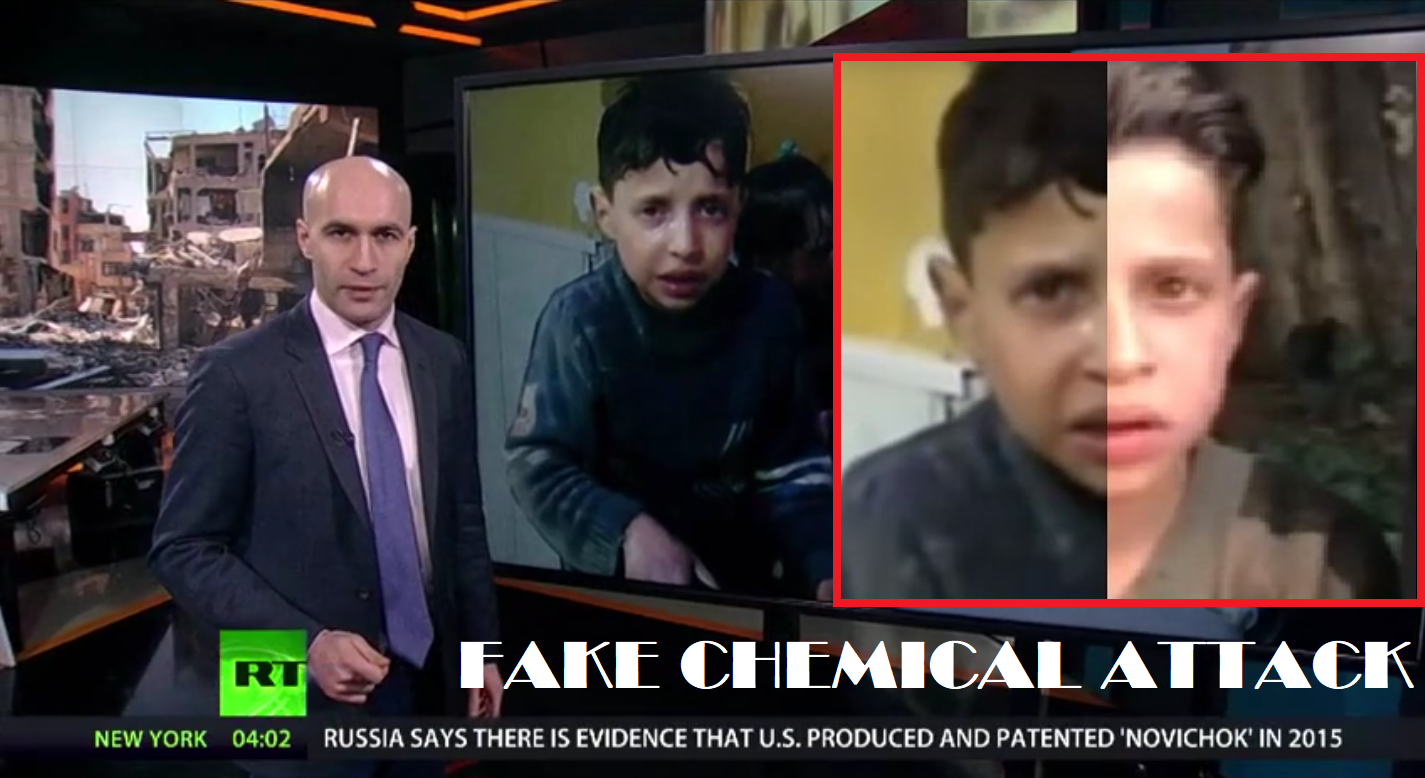 It’s not clear whether they are doctors from the hospital, human rights activists, or White Helmets members. The latter usually make such videos and send them to news agencies, including Reuters.

Russian broadcaster VGTRK said it found the boy in the video, who appeared to be 11-year-old Hassan Diab.

His story differed from the one presented by the activists and later propagated by the mainstream media. He was in the basement with his mother, who said they ran out of food, when they heard some noise outside.

“Somebody was shouting that we had to go to the hospital, so we went there. When I came in, some people grabbed me and started pouring water over my head,” he told Evgeny Poddubny, a war correspondent from Russian broadcaster VGTRK.

Hassan confirmed that he was the boy in the video, and was very scared when the whole situation unfolded. He is now fine and shows no symptoms of having experienced a chemical attack two weeks ago.

He was eventually found by his father, who said he didn’t hear about any chemical attack that day.

“I went to the hospital, walked upstairs, and found my wife and children. I asked them what had happened, and they said people outside were shouting about some smell, and told them to go to the hospital. At the hospital, they gave dates and cookies to the kids,” he said.

One of the medical workers, who was reportedly on shift at the time, said he was surprised by the sudden influx.

“Some people came here and washed people. They said: ‘Chemical attack. Chemical attack.’ We didn’t see any chemical attack symptoms,” he added. He did, however, say that there were many people with respiratory problems as a result of dust from recent bombings in the city.

Social media posts and the White Helmets’ report were enough for the US, UK and France to launch a series of strikes on Syria on April 14.

The announcement of the strikes came hours before the Organization for the Prohibition of Chemical Weapons (OPCW) team was scheduled to arrive in Douma to determine whether chemical weapons had been used there.

“The boy agreed to play this role for food. Then the video was circulated across the globe and became the ‘evidence’ which served as an excuse for the US, the UK and French airstrikes [against Syria],” Foreign Ministry spokeswoman Maria Zakharova wrote on Facebook.

Moscow is planning to show the video about Hassan at the next meeting of the UN Security Council, Russia’s UN envoy Vassily Nebenzia told Rossiya 1 on Thursday.

Here’s Why Perfumes Are Being Labelled As The New ‘Second Hand Smoke’ Previous post
The Warmongering Mainstream Media: Out of Top 100 News Outlets, Not a Single One Questioned Syrian Attack Next post