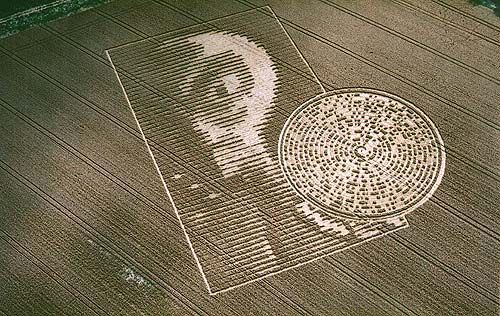 Who Could Make This Intricate Crop Formation With Binary Code Message Included, in the Middle of the Night?

The crop circle above appeared in 2002, in a field near Crabwood, UK. Yes, it’s real, it’s been filmed and documented in the Crop Circle archives, and you can see better pictures and video footage of it below.

So, it happened, regardless of who you believe made it. It’s ridiculously precise, like many others, and contains a humanoid face but looks like a version of the typical “grey” alien.

It also includes a hand with fingers and in the hand is a disc with a binary code, as well as 3 points in alignment over the beings right shoulder that may represent the constellation of Orion (Orion’s Belt).

Crop circles happen all over the world, and they’re made quite often. Constantly ignored by mainstream media, these intricate, complicated, precise and beautiful designs only seem to be brought up in a ridicule type piece. 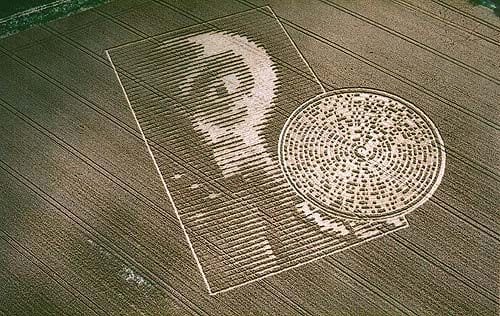 Perhaps because UFOs (balls of light) are associated with some of these designs (more on that below), and because there was, as the first director of the Central Intelligence Agency once said, an “official campaign of secrecy and ridicule, many citizens are led to believe the unknown flying objects are nonsense.”

It’s not surprising given what we already know about the CIA’s connection to mainstream media, and why we’ve seen so many ridicule pieces on these kinds of things in the public, thus influencing the collective mind.

For anybody who has looked into the phenomenon in a serious matter, and many have, there are anomalies surrounding them that can’t really be explained, unless you accept an ‘unconventional’  explanation.

The only time they get attention are when they are sloppy and man made, like this one. The more complex and extremely precise ones have strange measurements associated with them (mentioned later) and are made in the dead of night leaving no traces, marks, or footprints.

To be honest, I wouldn’t be surprised if many circles were man made (many are and we know this), but if it was deliberate to debunk the phenomenon is another matter to be discussed.

The photograph below was taken by Lucy Pringle, as well as the one above,  but it was viewed by many.

Here’s a close up of the Binary Circle: 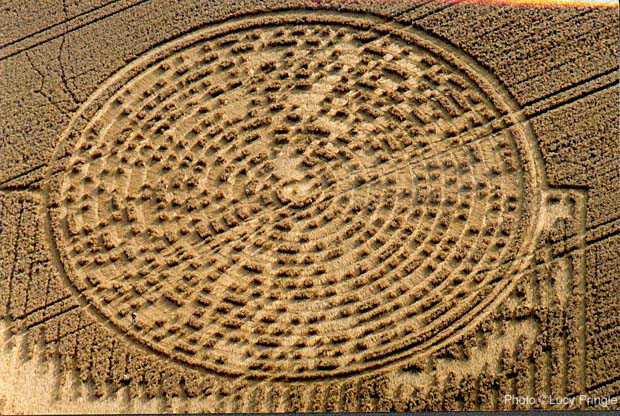 Not all are unexplainable, some are clearly man made, while others remain drowned in mystery.

Richard Taylor, a physicist at the University of Oregon, is one of several academics to take interest in the crop circle phenomenon within recent years, unfortunately, his is the only work that seems to be published in a serious peer reviewed scientific manner.

Taylor, despite ridiculing any ‘supernatural’ type of hypothesis, believes that “crop circle artists are not going to give up their secrets easily.”

He believes that unknown artists are venturing “into the countryside close to your homes” to “carry out their craft, safe in the knowledge that they are continuing the legacy of the most science-oriented art movement in history.”

I’ve used him as an example in multiple crop circle articles that I’ve written, and that’s because there are strange measurements taken at crop circle locations that can’t be debunked.

Taylor  has suggested that crop circle artists are using GPS devices, lasers, and microwaves to create these astonishing patterns of geometric forms due to the measurements that he obviously became aware of in his research.

Some of these designs are so mysterious and complex that they’ve even been studied in a laboratory setting, and some have indicated that the nodes of some of the stalks were blasted out on one side.

It’s not conclusively known how this was done, but the effect has been replicated by highly localized microwave heating. This type of technique causes water inside to vaporize and dislodge. As a result, the stock flops completely over to one side. (Dolan, Richard. UFOs For the 21st Century Mind: New York: Richard Dolan Press, 2014)

Here’s another angle, taken from a helicopter. 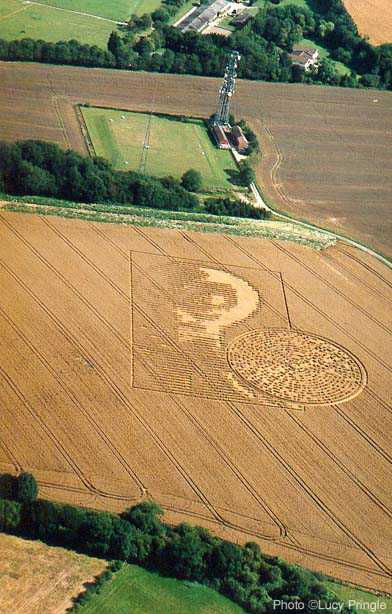 Many other scientists and academics, who are completely convinced that there should be serious attention given to these designs, would never have their work published, simply because of the implications and the fact that it defies belief.

We see the same type of thing with regards to non-material science, and parapsychology which, despite having significant statistical results that match our ‘hard’ science, is still somewhat ridiculed by many. But things are changing and progress is being made. 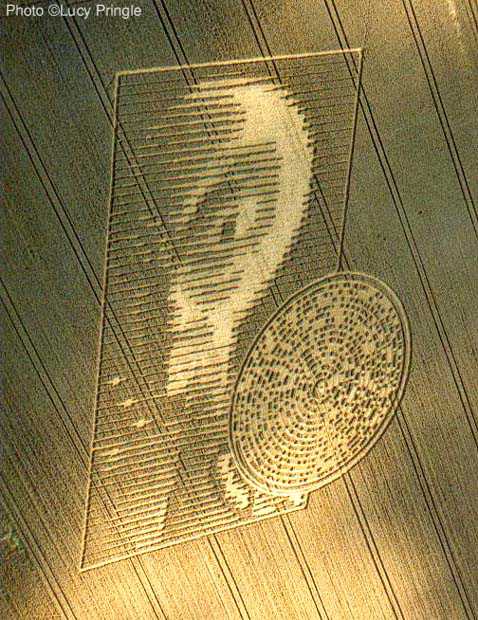 What Does The Code Say?

Paul Vigay, a British computer consultant, notable for work in developing and supporting RISC OS software, a longtime research in the field, having also worked with Mel Gibson on the film signs, unfortunately died a very mysteries death, he was the one who discovered that the message was encoded in ASCI binary code.

According to his interpretation, it reads:

“Beware the bearers of false gifts and their broken promises. Much pain but still time. (Damaged word.) There is good out there. We oppose deception. Conduit closing (bell sound).”

You can read everything on the subject by following THIS LINK.

Video Footage of the Circle

Below are pictures taken from a youtube video, they are blurry screen shorts compared to the actual footage. This is one of many fascinating corp circles, that defy belief, regardless of whether it is human or extraterrestrial.

In this one you can see people roaming around in it after it’s been discovered. The traces in and out were made after its discovery for people to come and look at it, but there was no sign of entrance or exit prior. 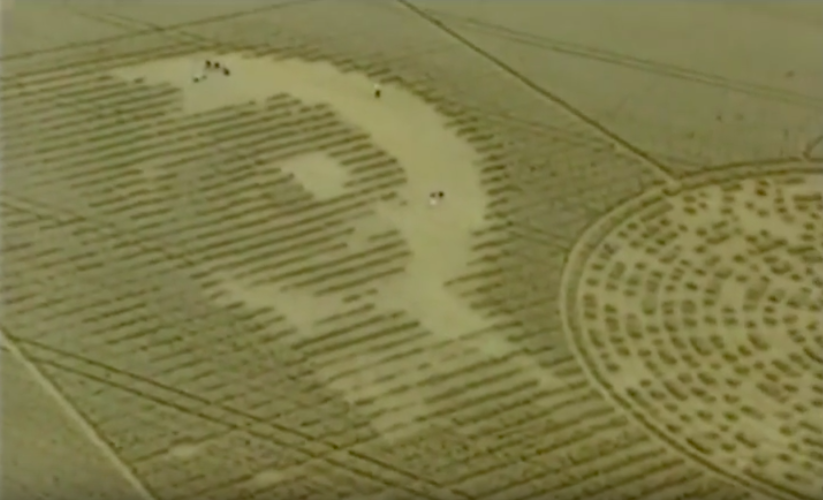 This one you can see a couple of people standing in the binary area. 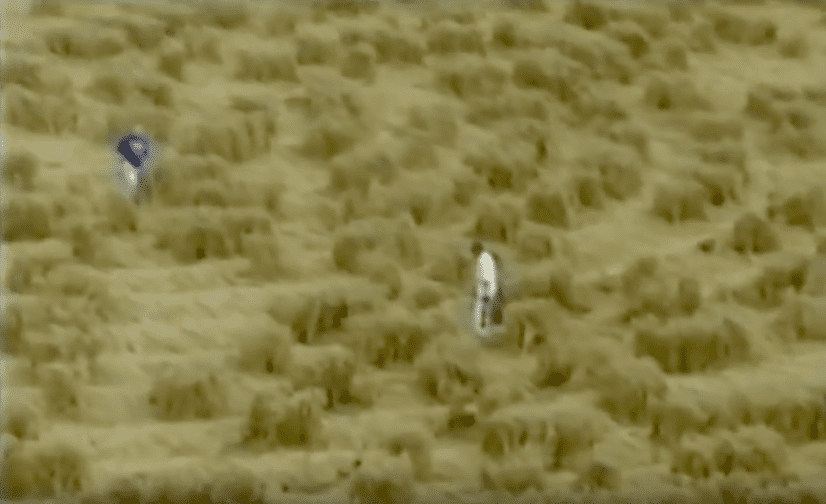 Another interesting oddity regarding crop circles is that the electromagnetic field over the area where the crop has been laid down to create the image is often electrostatically charged.

“There is a mounting body of evidence that suggests that a rare form of electromagnetic energy called an ionised plasma vortex (generally known as ball lighting) is involved.” – Greg Jefferys, historian

This explanation was originally offered by physicist Dr. Terence Meadon, who believed that these patterns were the result of atmospheric phenomena.

Several investigators believe that some kind of light energy is key in creating these circles, they’ve even been filmed a number of times and are all over youtube, including one of the videos below.

The light phenomenon is discussed and filmed in the video below, there are many floating around on YouTube., and many pictures have been taken of this type of light which seems to go hand in hand with multiple crop circles.

Military activity into ‘strange’ phenomenon is nothing new so the video below shouldn’t surprise you, especially now that it’s been disclosed that the military have been ‘chasing’ these objects for years.


Personally, based on my research over the years, I have no doubt that some of these designs are ‘extraterrestrial’ and or spiritual in nature I still have a lot of research to do, and there are a lot of peoples work in this area that I am still looking into.

The crop circle phenomenon is very interesting. Understandably, one might be quick to instantly dismiss the idea that some of these designs could be the work of some unknown entity. Many reasons to further ponder these wonders of the world exist.

Foster Gamble, heir to Proctor Gamble Corporation, and great-great-grandson to James Gamble, illustrates in his film Thrive that the extremely complex circles are also littered with strange magnetic particles.