And along with it the exploitation of the concept of anti-semitism, is a sinister trend that has been accelerating lately. Historically, anti-semitism used to actually mean something (i.e. the hatred of Jews just because they were Jewish).

Nowadays, the international Zionist cabal and network are cunningly trying to change the definition of anti-semitism to stop any criticism of Israel.

Such criticism of Israel may be entirely legitimate, justified and based on the actions of the Israeli Government, and thus have nothing to do with “Jews”, “Jewishness” or “Judaism” itself.

However, the Zionist plan is to catch all such criticism in the anti-semitism/hate speech dragnet so that the Israeli Government can continue unimpeded on its merry genocidal way. The definition of anti-semitism is being changed for one simple reason: censorship.

Just take a look at recent bills and laws on the books inside of the United States. In April 2018, South Carolina passed a law with a new definition of anti-semitism which significantly broadened the meaning of the term.

The effects are far-reaching. This piece of legislation requires the state’s colleges to use this new definition when determining whether an action is “discriminatory” (and thus banned).

Essentially, in many areas related to Zionism, it forbids factual and true statements which are critical of Israel by codifying them as anti-semitic! Seems the terms post-truth world and post-fact world are spot on.

(B) For purposes of this proviso, the term “definition of anti-Semitism” includes:

(1) a certain perception of Jews, which may be expressed as hatred toward Jews. Rhetorical and physical manifestations of anti-Semitism are directed toward Jewish or non-Jewish individuals and/or their property, toward Jewish community institutions and religious facilities;

(2) calling for, aiding, or justifying the killing or harming of Jews;

(3) making mendacious, dehumanizing, demonizing, or stereotypical allegations about Jews as such or the power of Jews as a collective;

(4) accusing Jews as a people of being responsible for real or imagined wrongdoing committed by a single Jewish person or group, the state of Israel, or even for acts committed by non-Jews;

(5) accusing the Jews as a people, or Israel as a state, of inventing or exaggerating the Holocaust;

(6) accusing Jewish citizens of being more loyal to Israel, or to the alleged priorities of Jews worldwide, than to the interest of their own nations;

(7) using the symbols and images associated with classic anti-Semitism to characterize Israel or Israelis;

(8) drawing comparisons of contemporary Israeli policy to that of the Nazis;

(9) blaming Israel for all inter-religious or political tensions;

(10) applying double standards by requiring of it a behavior not expected or demanded of any other democratic nation;

(11) multilateral organizations focusing on Israel only for peace or human rights investigations; and

(12) denying the Jewish people their right to self-determination, and denying Israel the right to exist, provided, however, that criticism of Israel similar to that leveled against any other country cannot be regarded as anti-Semitic.

(1) is the true and historical definition, and I can fully understand why this (as with any other form of racism) is a problem, just as (2) and (4) are.

As a libertarian, I don’t believe it is the government’s job to force people into being kind (you can’t legislate morality), although the civil rights movement did a lot for people who suffered from a lack of rights and freedom.

Obviously I can see how a government would be concerned about public safety with (2) and (4).

However, most of the following points are a gross expansion of the original definition of anti-semitism into something so broad that it stifles free speech, critical thinking and the ability to investigate and discuss openly many aspects of the worldwide conspiracy.

So, if you live in South Carolina, it is now illegal to:

(3) – make reference to the obvious fact that concentrated Jewish power exists and dominates certain industries such as the media (MSM, Hollywood), politics or the high-tech sector (the Talpiot Program);

(5) – investigate, draw your own conclusions from a historical event (the Holocaust) and announce those conclusions if they differ from the official story.

In fact, even if you merely say the number of Jewish deaths is wrong (i.e. not 6 million), you are not a historian or researcher, but rather an anti-semite, because you are stating that the Jews or Israel are “exaggerating” the Holocaust – which happens to be the truth, since the Holocaust has been seized and capitalized upon for political gain, as many Jews such as Norman Finkelstein point out;

(6) – claim that some dual Israel-US citizens may be more loyal to Israel than the US. Wow! Ever looked at the 9/11 cast of characters and conspirators? They are full of Neocons and Zionists! There are so many examples of Israeli collusion on 9/11, helped on by PNAC Zionists like Dick Cheney, Donald Rumsfeld, Paul Wolfowitz, Michael Chertoff, Dov Zakheim and many more;

(8) – point out the obvious hypocrisy of the Zionist regime which runs Gaza like an open-air concentration camp, just as the Nazis did with the Jews and other minorities.

Israel rations food, water, electricity and other supplies to the Palestinians, controls their freedom of movement, tests out its new weaponry on unsuspecting Arabs there, as well as slaughters anyone it wants too with impunity, by falsely claiming that it is “only defending itself” and that all Palestinian protestors including women and children are automatically from Hamas (yes, the very same Hamas that Israel supported and helped to create);

(11) – demand that peace and human rights organizations focus on Israel, when, demonstrably, Israel has been the main aggressor in the region ever since its inception, including starting the 6-Day War against Egypt then Syria, attacking the USS Liberty, stealing land from its neighbors and invading Lebanon in 1982.

That it stops its discriminatory apartheid policies that values Jewish citizens over all other citizens? It is equally demanded in all Western democracies that all people are treated equal regardless of race and religion (even though it doesn’t happen in practice).

Likewise, with (9), it is undeniable that Israel’s power is massively disproportionate and large compared to its tiny population and geographical area. It has a history of provoking the countries around it into war by being the aggressor.

Number (12) makes the point that “criticism of Israel similar to that leveled against any other country cannot be regarded as anti-Semitic” yet this is just a lip-service glossover.

The whole point of this bill is to crush criticism of Israel! This proviso reminds of the proviso in the Balfour Declaration where it states that the UK approves of Israel building settlements in Palestine as long as the indigenous people living there are not disadvantaged. Well that worked well. The whole existence of Israel, since even before 1948, is been nothing but a pushing back, stealing and genocide. 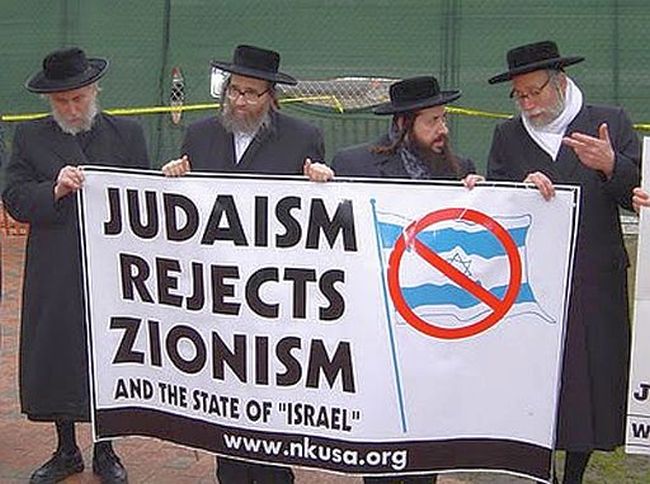 On May 23rd 2018, a federal bill was also introduced called the Anti-Semitism Awareness Act of 2018. The goals are the same: silence criticism of Israel, gut the First Amendment and cancel free speech – despite the fact that anti-semitic harassment is already illegal under federal law.

This is just part of a larger pattern whereby the pervasive Zionist influence throughout the halls of Western Government clamps down on any anti-Zionist perspectives – in the US, UK, Canada, Australia and other places.

“Campaigns aimed at excluding critics of Israel from participating in public events are mounting, often with support of publicly funded institutions. A Chicago-area public library temporarily cancelled a talk about a book titled “The Battle for Justice in Palestine,” before reconsidering its decision. The Missouri History Museum cancelled a community event titled “From Ferguson to Ayotzinapa to Palestine,” after organizers refused to remove Palestinian panelists.”

The must-watch documentary Defamation, made by Israeli Jew film director Yoav Shamir, does an excellent job exposing how modern anti-semitism is largely invented out of thin air. Yes, anti-semites, white supremacists and other Jew-haters exist, but as a tiny minority, shunned by the majority of people who are not racist.

Yet, so much Jewish identity and sympathy for Zionism and Israel depends on anti-semitism being alive, so organizations like the ADL (Anti-Defamation League) exist essentially to fan the flames and concoct sham reports, which then get passed along to the MSM and FBI, who dutifully toe the Zionist line and declare falsities like “anti-semitism is on the rise.” 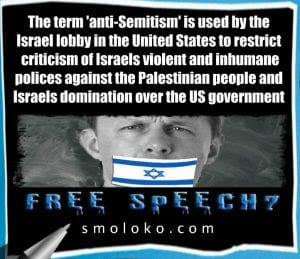 We live in a world where our cherished freedom of speech is under constant attack, especially by PC (political correctness). Zionism is at the apex of the PC pyramid; it’s the tyrant-king who has learnt how to name-call and throw mud par excellence.

It has everyone scared, especially politicians and celebrities, of saying anything even slightly offensive. It harnesses its massive network to make the name “anti-semite” stick, even if there’s no truth to it.

The modification of the definition of anti-semitism is a crude attempt to exploit the real suffering of Jews 85+ years ago at the hands of the Nazis. This agenda is even targeted at (the now many) Jews who oppose Zionism themselves!

It has nothing to so with real historical meaning of anti-semitism, but rather operates purely to suppress criticism of Israel. Historian David Irving spoke of an organized international network that would target him when he reported historical facts. Whether it’s the CAA in England, or AIPAC, the ADL and the SPLC in the US, the goal is the same.

“Well, it’s a trick. We always use it. When from Europe someone criticizes Israel, then we bring out the Holocaust. When in this country (USA) when they criticize Israel, they are anti-semitic … it’s very easy to blame people who criticize certain acts of the Israeli Government … that justifies everything we do to the Palestinians.”

Clever people will see through this ruse of anti-semitism – and brave people will rise above it.