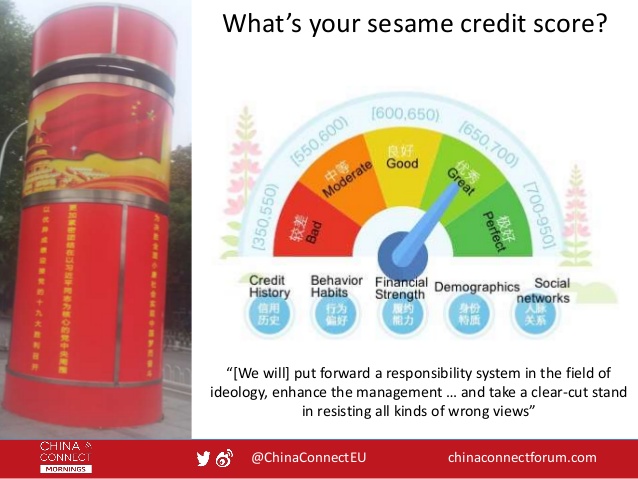 Sesame Credit is an ambitious technological authoritarian system now used by Communist China (a NWO model) to control its citizens’ ability to buy, sell & transact based on how obedient & conformist they are.

Sesame Credit is the all-encompassing technological and authoritarian system now used by China to control its citizenry. China has been emerging as a New World Order model for decades.

Although there is a superficial facing off between the US-led West on one side, and China-Russia on the other side, the NWO plan is to use the friction created in these geopolitical battles to merge all the nations of the world under a One World Government.

Many NWO controllers have long displayed open admiration for the Chinese model of authoritarianism, centralized power and the large amount of control it wields over its massive population. 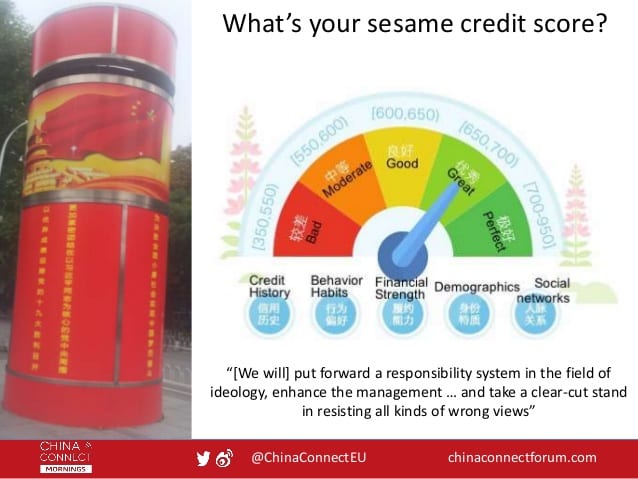 Recently China introduced a massive society-wide system called Zhima Credit (Sesame Credit), a full-spectrum social credit system that assigns a score to citizens based on how “good” they are.

This system is based on gamification, i.e. the gamifying of virtually every human endeavor, itself based on the exploitation of brain chemistry (dopamine hits) and human psychology.

However, it’s not just a harmless game; it can have serious real-world consequences. Chinese journalist Liu Hu felt the brunt of the Chinese NWO model when he was denied the ability to buy property, take out a loan, buy an airplane ticket or even to travel on a Chinese trains.

For starters, we are told by none less than the Chinese Supreme Court itself that the underlying philosophy of Sesame Credit is once untrustworthy, always restricted.

Now that is a chilling and anti-freedom philosophy if there ever was one. Imagine if this same principle were applied in reverse by citizens towards their governments.

What government on Earth would survive? What authority would not have a sufficient level of corruption to be found “untrustworthy” in some way? Imagine if we lived in a world where the People could could simply apply this to the governments and instantaneously “restrict” them.

In the USA there is a whole system of credit reports and credit scores that allow banks and lenders to rank borrowers based on how creditworthy they are. This has consequences for taking out loans for houses, cars and other reasons, as well as for obtaining credit cards.

However, the system is based purely on your financial history, activity and level of responsibility.

Sesame Credit takes the idea to a whole new level. The algorithm generates a score not just based on your financial history, but numerous other inputs such as your criminal record, whether you pay your taxes, fines and fees, how well you obey traffic rules and other laws, your shopping and lifestyle habits and – here’s the big one – how well you support the government.

For the Chinese, Sesame Credit is now starting to rule their lives. It determines their access to loans, housing, social services, certain types of employment, travel, university and information (internet). It is influencing and determining all sorts of behavior – even who people choose to befriend, since their Sesame Credit score becomes lower or higher depending upon the scores of their friends.

Clearly, this is a far-reaching and dangerous kind of technological social engineering which reduces the value of a human being to a number, and essentially forces them to respect authority in order to maintain their standard of living.

China’s social credit system (Sesame Credit) is far broader than the US credit score,
and has massive implications for freedom. Image credit: WSJ

Limiting the Purchasing Power of Dissidents

A few brave Chinese have found out the hard way what can happen if you rock the boat. According to this Globe and Mail article, accomplished journalist Liu Hu spent 20 years pushing back against censorship in China. He used his blog to expose the corruption of high-level officials.

In 2013 he was accused and arrested for “crimes” such as “fabricating and spreading rumours” and in 2016 in a separate case a court found him guilty of defamation.

Then in 2017, Liu suddenly felt the impact of getting on the wrong side of authorities in modern-day China:

“… he discovered that his life had abruptly changed: Without any notice, he had been caught up in the early reaches of a social-credit system that China is developing as a pervasive new tool for social control – one expected to one day tighten the state’s grip on its citizens. Critics have called it an Orwellian creation – a new kind of “thought police.”

“What it meant for Mr. Liu is that when he tried to buy a plane ticket, the booking system refused his purchase, saying he was “not qualified.” Other restrictions soon became apparent: He has been barred from buying property, taking out a loan or travelling on the country’s top-tier trains.

“There was no file, no police warrant, no official advance notification. They just cut me off from the things I was once entitled to,” he said. “What’s really scary is there’s nothing you can do about it. You can report to no one. You are stuck in the middle of nowhere.” “

The article, published in January this year (2018), states that the blacklist had swelled to 7.49 million names as of last summer (June-August 2017 presumably).

The Globe and Mail also examined the “records of two dozen people on the blacklist, many of whom had committed minor offences. One man was blacklisted over a $1,500 rent payment. Another had not repaid $1,900. Another failed to pay a $195 fine. Yet another had shoplifted 10 packs of cigarettes worth $70.”

China: The Dreamed NWO Model of the Globalists

The NWO globalists have a declared and obvious admiration for China. The now deceased David Rockefeller wrote this in the New York Times in 1973 – only around a decade after Mao Tse-Tung’s disastrous Great Leap Forward which took the lives of an estimated 18-55 million people:

“Whatever the price of the Chinese Revolution, it has obviously succeeded, not only in producing more efficient and dedicated administration, but also in fostering a high morale and community propose. The social experiment in China under Chairman Mao’s leadership is one of the most important and successful in human history.”

To give Western readers an idea of just how authoritarian China has become, consider this: a lawyer named Li Xiaolin discovered he couldn’t buy a plane ticket because of an “insincere apology.”

Yes, you read that right. The Chinese Government not only has the power to order someone to apologize, but also to determine whether their apology is sincere … eerily reminiscent of the Party’s purpose in 1984 to ensure that all citizens not only obeyed Big Brother but loved Big Brother.

This incident had nothing to do with Sesame Credit per se, however the insincere apology meant he’d failed to comply with a court order, which landed him on a government blacklist.

China is a big player in the technological and IT fields. The Sesame Credit system is being fueled by technological advances to grab data from all aspects of a citizen’s existence – commercial, social, emotional, political and moral – and distill this data into a single score, which becomes the basis of a hierarchical or tiered society.

However, in comparison to the historical caste system of India (where you were born into a particular class and stuck there for life), Sesame Credit encourages you to actively change your behavior via gamification to become more compliant, self-censoring, obedient and deferential – all in the hope of getting a better score.

In this way, Sesame Credit is even more insidious than the caste system. It’s no wonder that control freaks would love to roll out such a system worldwide under the auspices of a Global Government.


Here are some of the noteworthy YouTube comments to the above video:

1. “What an Orwellian nightmare. Advertisers and marketing companies are going to make millions from extracting their personal data and many of these interviewees seem to be content with having their lives manipulated.﻿”

2. “This technology scares me because it can go so wrong; I hope that the beta version of this technology shows all the downsides too. Also, Chinese people’s trust on their Government shocks me. In my country, politicians do not have much credibility in terms of making the best decisions for citizens but for companies.”

3. “What would happen if someone wanted to deviate from social norms, or start a political movement that oppposes the government’s main ideologies? Wouldn’t this social system also prevent social change and arguably be a form of oppression if abused?﻿”

4. “With this system, how can a poor person with their cheap items and low-rank family ever escape poverty? And how about people who make mistakes as kids or teens – will that follow them forever? How can a former convict rehabilitate themselves when their punishment continues outside jail after they’ve served their time? What about the victims of social media smear campaigns? There are SO many ways of unintentionally and permanently ending up on the wrong side of this system. It’s basically extrajudicial punishment where an algorithm is your judge, jury, and executioner. All these interviewees cheering for vigilante justice because “I never did anything wrong”, but what they don’t realize is they won’t be the ones to define what’s wrong…﻿”

5. “If the app creators have an agenda against certain belief systems or people groups, some of these good citizens could find themselves victims of sabotage, regardless of good behavior. History repeats itself unless its lessons are learned and passed on.﻿”

6. “What amazes and frightens me most is the way these people completely ignore the danger of the government abusing this this type of system against political dissidents or rivals. The ultimate way to control and punish Wrong Think !!!﻿”

It is no exaggeration to label Sesame Credit as the most ambitious attempt by any government in modern history to control their citizenry via technology, psychology and gamification. It is indeed a new kind of authoritarianism that mines a person’s online identity, combines it with their offline identity, and assesses them based on anything they’ve ever said, wrote or done.

From a pop culture perspective, it’s similar to the Netflix series Black Mirror where a virtual digital score is attached to everyone in society.


If we’re not aware, this exact kind of system will be rolled out in Western nations – and everywhere.

At the current state of consciousness, it would not be surprising if many sleepwalking people lost sight of the aim of the “game” and jumped gleefully onto the hamster wheel in pursuit of the latest project of getting a high score – forgetting how the whole point is to gamify them and mold them into exactly the kind of docile citizens the State wants.