Chakra Healing With The Seven Sacred Egyptian Oils of Saqqara

Thirty kilometers south of modern-day Cairo sits an ancient burial ground in Saqqara. Home to the oldest stone complex historically known — Djoser’s Step Pyramid — and also home to what are believed to be the world’s oldest religious writings — The Pyramid Texts — Saqqara has been a sacred place for burials, rituals and ceremonies for over three thousand years.

Amid the many pyramids and temples constructed there, old Egyptian texts were discovered upon the walls and sarcophagi dating back to the 5th and 6th Dynasties of the Old Kingdom.

Within these translated texts, there are details of Seven Sacred Oils used during rituals, with each seemingly associated with a force of nature.

These fragrant oils were commonly utilized as cosmetics, fragrances, as offerings during funerals to aid in helping the deceased pass into the heavens, and for anointing statues associated with particular Gods/Goddesses aka Neters in hopes of gaining greater health or prosperity.

So, what’s the relationship between these Egyptian practices and the Hindu spiritual belief system of the seven chakras?

However, the Egyptians tied the energy centers to the endocrine system and seven specific glands within the body that must be vital for health — a concept also believed about the chakra system by the Hindus.

How the ancient Egyptians knew that these particular oils resonated at frequencies that were harmonically ideal to balance and assist the chakras and their associated glands is a mystery.

But as the purported inventors of aromatherapy, they certainly had powerful insights and connections with nature’s healing tools. However, science has now shown that these oils indeed do have healing effects upon the endocrine system and the mind, body, and spirit as a whole. 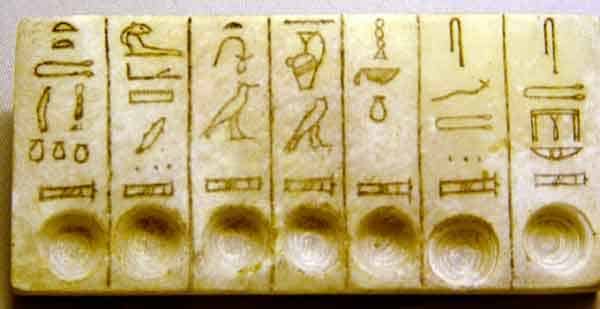 Lotus Oil: The Crown of Osiris and Master of the Crown Chakra

The Pyramid Texts of Saqqara describe the second oldest known mention of the Neter Osiris, who is arguably the most important Egyptian deity of the afterlife. Amid funerary ceremonies, the lotus flower was closely associated with the rites of the Cult of Osiris.

It was common for the symbol for ‘plant’ or ‘tree of life’ to consist of three lotus lilies believed to embody Osiris “rooted in the earth and reaching for the heavens.”

This represents the motion of energy as it moves through the chakras to the crown chakra where the pineal gland is located. When considering Osiris as a force of nature associated with the powers of creation, it’s only natural that Lotus Essential Oil is recommended for awakening and balancing the crown chakra.

Sandalwood Oil: The Eye of Horus and Clarifier of the Pituitary Gland

The Egyptians believed that by working with the power of Horus through the use of Sandalwood oil, one could tap into the energy of the sun to traverse into realms beyond the earthly plane and return safely and filled with divine knowledge.

Amber Kashmir Oil: The Throat of Thoth and Activator of the Thyroid

This incredible scent honors the powerful Neter Thoth, who is credited for being the author of every single branch of worldly and divine knowledge. Widely considered a conduit for infinite powers as a mystic, sage and magician, Thoth is associated with the throat chakra and amber kashmir essential oil is believed to be useful in unlocking his energetic forces.

Using amber kashmir essential oil for cleansing the throat chakra and promoting thyroid health gives one power like Thoth to speak their truth in words and writing with both greater ease and clarity.

Rose Oil: The Heart of Isis and Booster of the Thymus

As the living embodiment of loving and maternal instincts as expressed by the physical world and a symbol of the divine feminine, Isis as a Neter is related to the heart chakra. The all-important heart chakra is closely associated with the T-cell producing immunity center of the body — the thymus gland — an essential aspect of human health.

Referred to as Attar of Roses amid the Saqqara texts, this sweet and mesmerizing oil brings feelings of warmth to the heart, cleansing it of old hurts and fears, and opens one up to receptivity and acceptance of forgiveness and love.

Jasmine Oil: The Solar Plexus of Ra and Regulator of the Adrenals

Soak in the warmth and energy of Ra with Jasmine oil and embrace his concept of the ‘I am’ presence through cleansing, balance, and activation of the solar plexus chakra.

As an embodiment of Horus and a creator god, he connects to nature as a Neter/force in the aspect of bringing forth one’s connection to creative forces all around them and their potential as manifestors of their own reality.

Jasmine can help give one the confidence and security that they have the power for not only survival but prosperity in the physical world.

Egyptian Musk Oil: The Spleen of Hathor and Key to Sensuality

Another vital aspect of the immune system is the spleen, a secreter of hormones vital to health and sensuality. The Egyptians associated the balancing joyous, and fertility promoting qualities of Hathor to the spleen, which is located within the sacral chakra.

Musk essential oil was commonly offered to honor Hathor by those seeking to connect with their emotions and enhance sexual desire. Musk oil profoundly affects the sacral chakra and one’s health in a number of positive ways.

Red Amber Oil: The Base of Set and Regulator of the Testes and Ovaries

Red Amber oil is described as an essential oil related to the ‘Base of Set,’ a Neter referred to historically along with glyphs such as rage and turmoil. In the sense of a force of nature, Set’s stormy reputation is an ideal representation of what happens to humans when their base chakra is out of balance.

As the survival center, one can use red amber oil to call upon the strength of Set for grounding and to release negative energies that promote fear, distrust, and anger.

By Stephanie Lucas and www.QuantumStones.com