A former gang member with cancer has admitted on TV that he was an accessory to murder in the killing of Tupac Shakur and police have not acted.

After 22 years of mystery and missed opportunities by the Las Vegas Police Department and the FBI, the killer of Tupac Shakur may finally be unmasked. New leads were brought to light in two recent documentaries which could potentially reveal the identity of the shooter who has managed to fly under the radar for decades.

In the films, Unsolved: The Murders of Tupac and The Notorious B.I.G. (available on Netflix), and Death Row Chronicles, former gang member Keffe D admitted that he was in the front seat of the infamous White Cadillac that pulled up on Tupac and Suge Knight and sprayed their BMW with bullets.

Keffe is only coming forward now because he has cancer and feels that he has nothing to lose.

“I was a Compton kingpin, drug dealer, I’m the only one alive who can really tell you story about the Tupac killing,” Keffe said. “People have been pursuing me for 20 years, I’m coming out now because I have cancer. And I have nothing else to lose. All I care about now is the truth.”

Keffe claimed that a person in the back seat fired the shots, and although he knows the identity of the shooter, he will not break “street code” and release their name to the public or the police.

“Going to keep it for the code of the streets. It just came from the backseat, bro,” Keffe said.

One person who was in the back seat at the time of the shooting was Keffe’s nephew, Orlando ‘Baby Lane’ Anderson, but Anderson was murdered in 1998 and denied being the shooter before his death.

Earlier that night, a fight erupted between Tupac’s crew and Anderson’s crew after a boxing match at the MGM Grand, which allegedly planted the seeds for the shooting that transpired later.


Although Keffe admitted to being an accessory to murder and did not give up the name of the killer, he was reportedly given immunity for his confession.

Alexander: Actually, Keffe D did confess on tape that his nephew, Orlando “Baby Lane” Anderson, shot Tupac from the back seat, right side, of a rented white Cadillac. 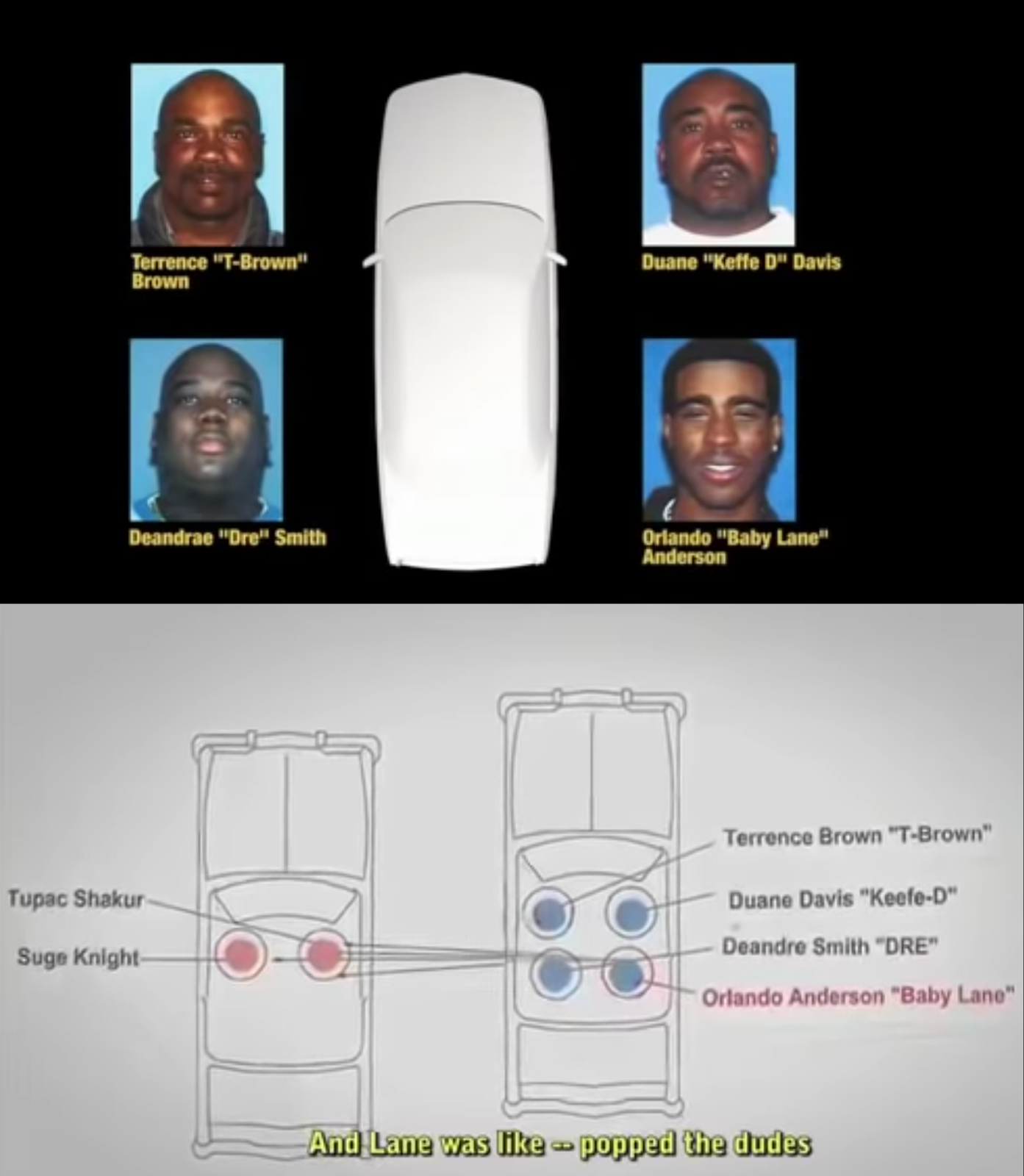 Just three hours before the shooting, Tupac and his crew were involved in the beating of Orlando Anderson, who was a member of the Crips.

Also, according to two separate confessions, some 10 years apart, Sean Combs, a.k.a. Puff Daddy, hired Keffe D. for $1M dollars to kill Suge Knight and Tupac Shakur. If you want to learn more on the subject, I suggest watching Unsolved: The Murders of Tupac and The Notorious B.I.G on Netflix.

Kyle Long, the director of the Unsolved documentary, said he is shocked that Keffe was not arrested after the interview was made public.

“Certainly Keffe D and the Southside Crips killed Tupac Shakur. And it is outrageous that Keffe D is not in jail… In the finale, when you see why the whole Keffe D thing, how he had immunity and that — long story short, in real life and in the television show, he had immunity to make this confession to the task force,” Long told The Wrap.

“It doesn’t matter that he doesn’t say who pulled the trigger… He went live on television and confessed to being an accessory to murder and the Las Vegas PD, as far as I know, is doing nothing about it.”

“I just think it’s outrageous. I just don’t understand it. It makes me upset. And it’s just crazy town to me,” Long added.

“It is so wild that a guy can — and I don’t know what kind of lawyer he has telling him to go on this television show and talk about it, but you know, it’s crazy. So that’s my rant about Keffe D and the Tupac murder, like to me, that murder, you could go arrest someone for that right now.”

Keffe D may have immunity, but sources told Las Vegas’s 13 Action News this week that an arrest in the case was “imminent.”

ARREST IMMINENT? An ex-gangster claims he knows who really killed Tupac in a new Netflix series. Now, a source tells @KTNV they believe an arrest is imminent. @LVMPD has NOT confirmed a potential arrest in this cold case … (cont’d) pic.twitter.com/l9EiKec57h

“We are aware of the statements made in a BET interview regarding the Tupac case. As a result of those statements, we have spent the last several months reviewing the case in its entirety. Various reports that an arrest warrant is about to be submitted are inaccurate. This case still remains an open homicide case,” LVMPD said in a statement.

The lack of concern about this case from police is not surprising, as they have put very little effort into finding and prosecuting the killers of Tupac, who was an outspoken critic of the police and the establishment in general.

Claim: If You Have Nothing to Hide,You Should Welcome Google’s New Surveillance System Previous post
Claim: The Elites Participate in Child Sacrifice at Bohemian Grove Next post