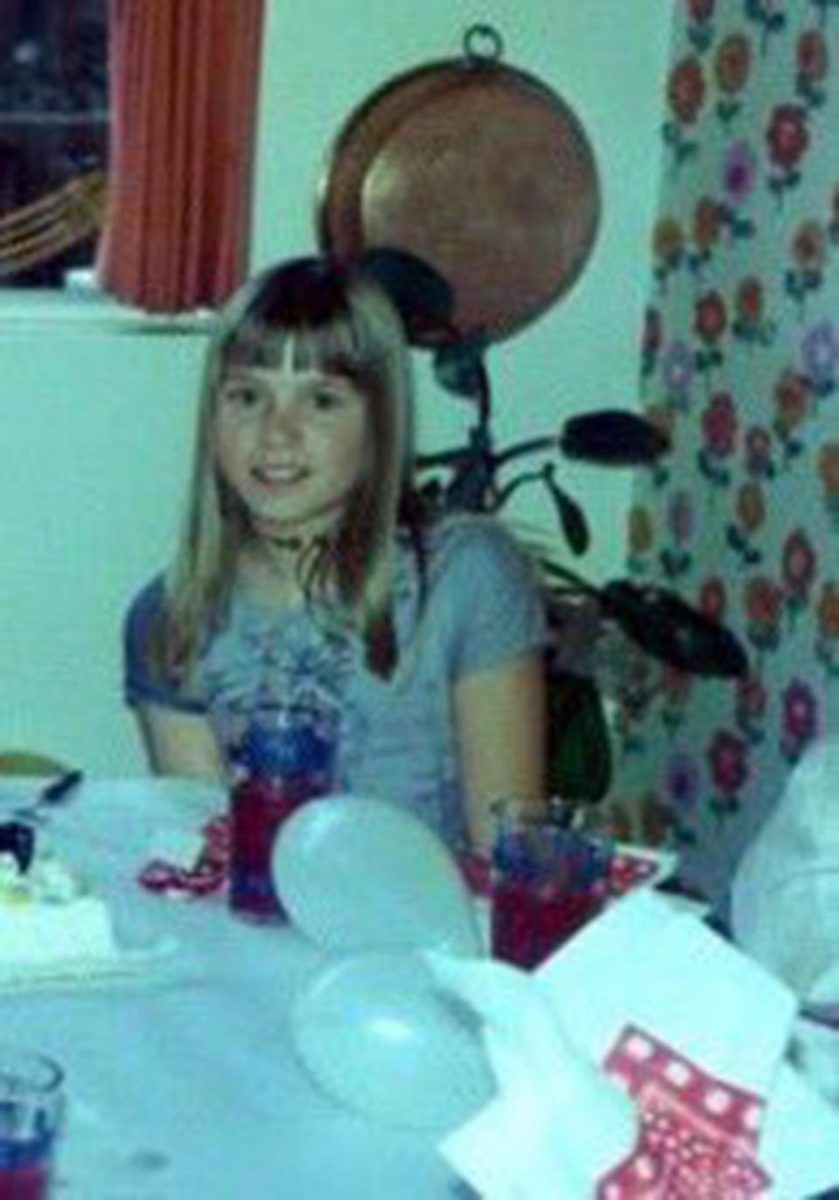 FIVE more women have come forward to accuse convicted child rapist Roman Polanski of sexual abuse, according to the founder of a website called imetpolanski.com.

If verified this would take the total number of women who say they have been raped or sexually abused by the disgraced movie director to 10.

Matan Uziel, from the Real Women Real Stories campaign group which set up the website just days ago, said that five new accusers have been in touch with harrowing and “believable” stories about Polanski, 84, who is still wanted by US authorities over the rape of a 13-year-old girl.

The accusers, currently only named as “Jane Does” were aged between 9 and 16 when the alleged assaults took place between 1969 and 1976. 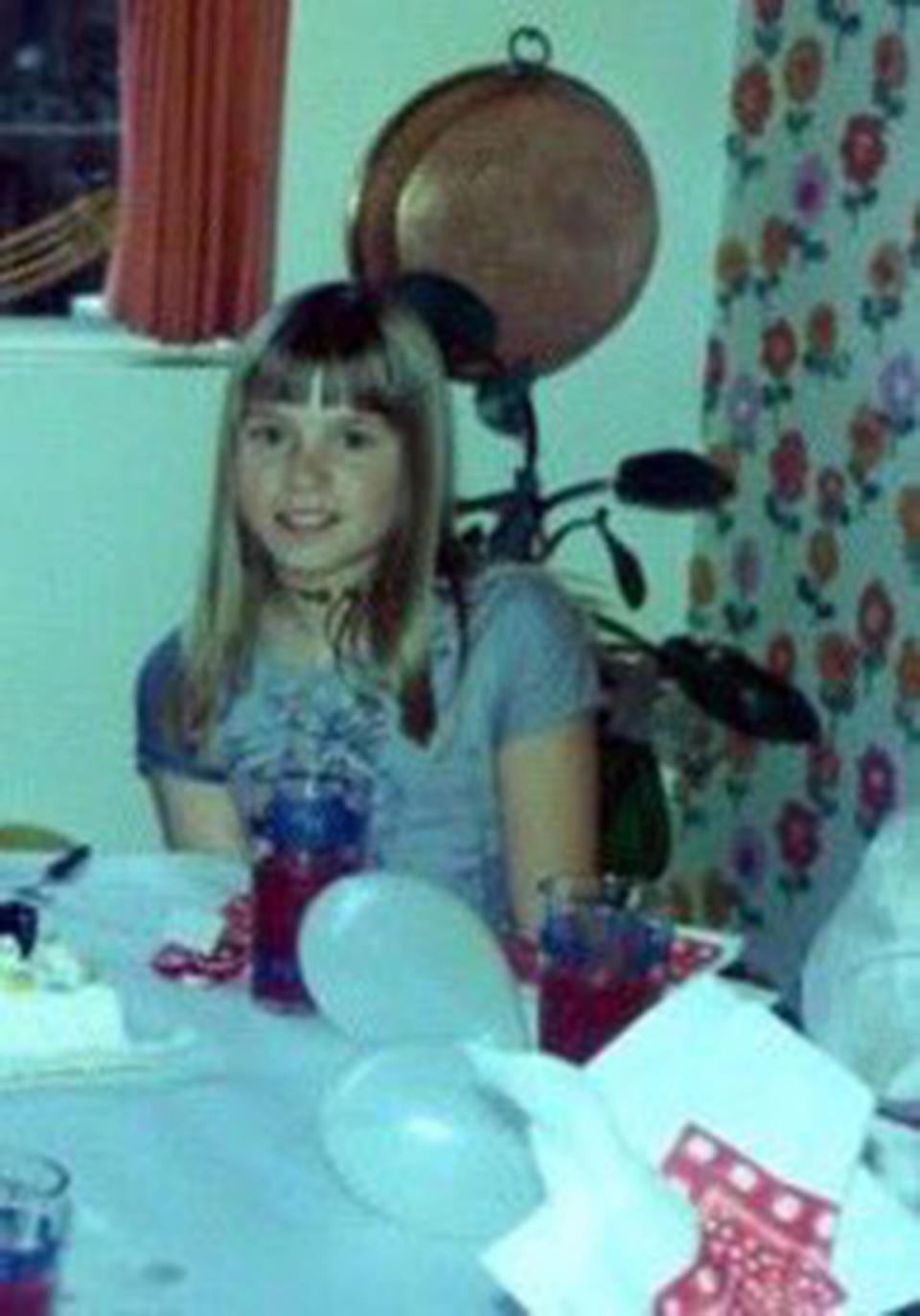 Marianne Barnard, pictured here aged 10, says she was sexually abused by Roman Polanski shortly before this photo was taken

Jane Doe #1 revealed how she met Polanski in Gstaad, Switzerland, during a dinner with her father, who worked in the film business, in 1976, when she was 15.

During the meal – which she said was attended by Jack Nicholson and his then girlfriend Anjelica Huston – Polanski molested the teen under the table without anybody knowing. 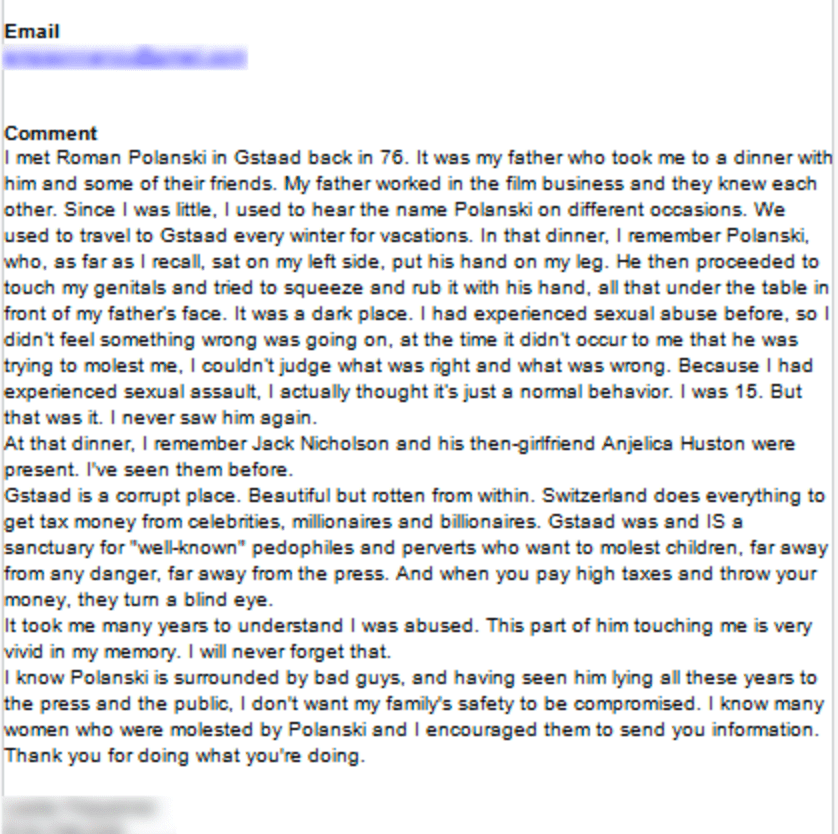 A woman named only as “Jane Doe #1” shared her harrowing tale via imetpolanski.com

She wrote: “It took me many years to understand I was abused.

“This part of him touching me is very vivid in my memory. I will never forget that.”

Now Real Women Real Stories is working with the women to verify their stories and assist them in speaking out and reporting their claims to police.

Matan, from the group, told Sun Online: “Already five new accusers have been in touch with us through the imetpolanski.com – in just a matter of days.

“They all seem very authentic and believable.

“I am now working to help verify the stories with the women – trying to find information and evidence to help prove the claims but obviously it is difficult because these incidents happened so long ago.

“We also believe that there are other victims out there and we hope they will be inspired by the strength of all these women to speak out.

He added: “Our hope is that the more women who come forward it will put pressure on the authorities to act against Polanski and finally bring him to justice.”

The social justice group launched the website to encourage victims to stand up to Polanski who they describe as a “monster” and paedophile who has spoken openly about his attraction to young teenage girls.

The website reads: “We can’t bear the thought of another woman’s or girl’s innocence taken away by him.

“Age and prison time do not cure paedophilia. Polanski has a long history of rampant sexual abuse. We want to hear your stories about Roman Polanski and other predatory men who have been using their positions of power and influence to sexually abuse and harass women.” 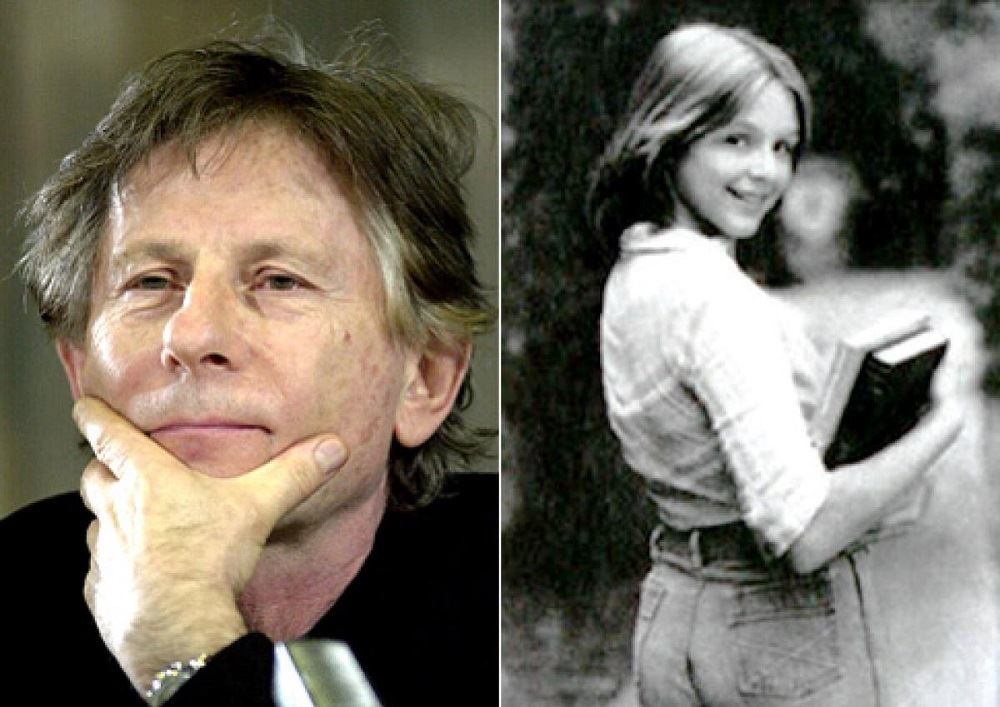 Roman Polanski was convicted of raping a 13-year-old girl in 1977 [no prison time, of course!]

“This site is dedicated for all the other victims of Roman Polanski, who were afraid to tell what happened years ago — but now, can tell their story knowing that it will not go unheard and will be shared to give others courage around the globe to put Roman Polanski in jail where he belongs.

“This unspeakable behavior towards women has to stop. All tips, once verified will be sent to law enforcement authorities and with permission will be shared anonymously on this site.”

It comes just weeks after California artist Marianne Barnard bravely spoke to Sun Online about Polanski molesting her on a beach in Malibu when she was just 10 years old.

Marianne, who was the fifth woman to accuse Polanski of child sexual abuse, said she was inspired to tell her story by the strength of the women who had accused movie mogul Harvey Weinstein of abuse.

She made an official report with the Los Angeles Police Department’s Robbery-Homicide Division (RHD) sex crimes unit but the LAPD have not yet confirmed to Sun Online whether or not they have launched a new investigation into the French-Polish director.

Marianne started a petition to remove Polanski from the board of the Academy of Motion Picture Arts and Sciences which has already garnered almost 20,000 signatures.

Earlier in October, German actress Renate Langer, now 61, filed a complaint to Swiss authorities accusing Polanksi of raping her when she was 15.

Back in 1977, Polanski was charged with raping 13-year-old Samantha Geimer.

The sex fiend gave his young victim alcohol and quaaludes before the attack, which took place at the home of actor Jack Nicholson.

Polanski was charged with five crimes – including rape by use of drugs – but took a plea deal in which he pleaded guilty to “unlawful sexual intercourse” in return for prosecutors dropping the five charges.

He then fled to Europe the night before his sentencing – after hearing that the judge planned to reject the plea deal and jail him.

Years later, Brit actress Charlotte Lewis accused Polanksi of “forcing” himself on her when she was 16 in 1982.

And a woman named as Robin M reported to authorities in Los Angeles County that she was sexually assaulted by Polanki in 1973 when she was 16.

Earlier this week Matan was involved in a protest against Polanski after French film organisation Cinémathèque Francais held an event to honour the movie director’s work.

Matan said: “He always tries to push this message that people who oppose him are Nazis.

“So let’s not fool ourselves, Polanski is a convicted felon, a fugitive – no matter how much mental gymnastics people want to employ – he is a criminal and a paedophile.

“As a third generation of Auschwitz survivors, who went through stories of horror about the Holocaust throughout my childhood, I am astonished that a criminal still has the audacity to come and call us Nazis.

“This is nothing less but minimization of the atrocities committed by Nazis and an insult to the Jewish nation as a whole.”