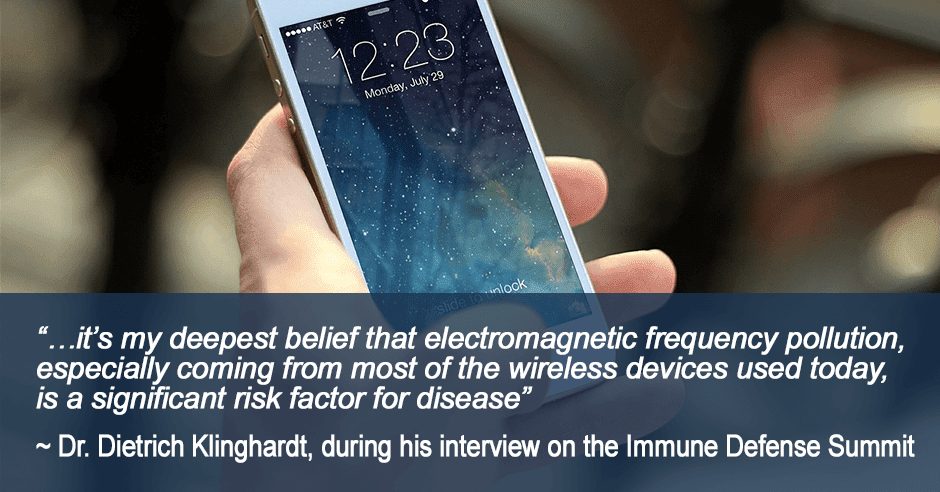 With the national rollout of smart meters and the advent of 5G wireless technology, healthcare professionals like Dietrich Klinghardt, MD, PhD are becoming increasingly concerned about the threat posed by EMF pollution.

But, in my opinion, electromagnetic fields (EMFs) are still one of the most overlooked health issues of our time – even by integrative healthcare providers.

No doubt, over the past few decades, microwave radiation from EMFs has intensified steadily, and with this increase has come a corresponding rise in the incidence of such illnesses as Lyme disease, diabetes and chronic fatigue syndrome (to name just a couple serious health conditions). 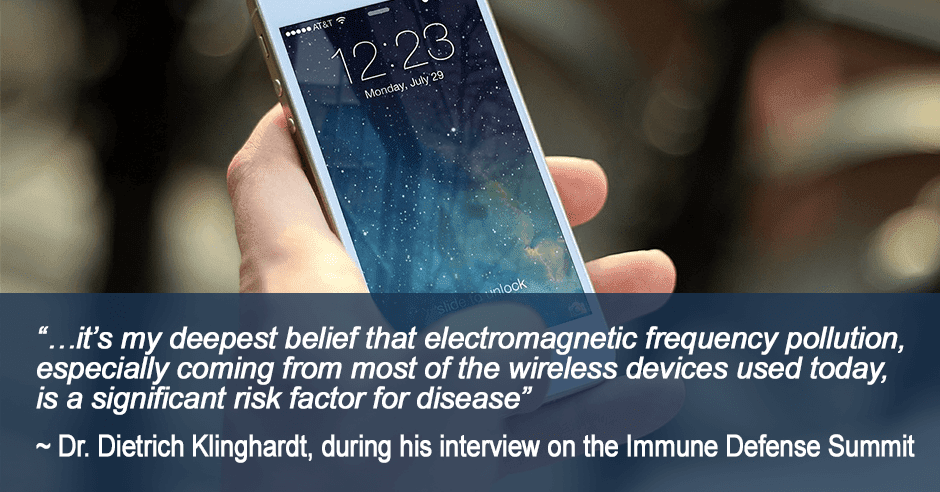 Health alert: EMF pollution and EHS is becoming more prevalent than ever

EMFs have been associated with brain cancer, infertility, neurological diseases, ADHD, immune system disorders and asthma. But, don’t expect the telecommunications industry to investigate the dangers any time soon. (for obvious reasons)

Effects from these radioactive fields can be objectively measured, and include changes to neurotransmitters, DNA breaks, an increase in free radicals, and increased blood glucose.

A $25 million study by the National Toxicology Program – designed to prove that cell phone radiation is safe – showed that 2G cell phone radiation causes brain cancer and DNA damage in rats. And, keep in mind, we’re fast approaching a time when all of us will be bathed in 5G radiation.

Some people are more susceptible to EMFs than others, and a growing number are experiencing “electromagnetic hypersensitivity” (EHS) – a set of symptoms that appear in some individuals when they are in proximity to wireless or electrical technologies such as smart meters, cell phones, wireless computers or power lines.

The most common symptoms of EHS are dermatological symptoms, such as redness, tingling, and burning. Fatigue, insomnia, memory problems, dizziness, heart palpitations and digestive disturbances can also occur.

Although mainstream medicine downplays EHS, Sweden, Canada and Spain have all recognized the condition as an environment-related disability.

Each year, 30,000 cases of Lyme disease are reported to the U.S. Centers for Disease Control and Prevention (CDC) – with the number of actual cases estimated to be much higher. Dr. Klinghardt notes that Lyme disease spirochetes have been around for many years, but in the past 30 to 40 years they have become more aggressive, more penetrating and more illness-producing than ever before.

“Exposure to electromagnetic fields and microwaves from cell phone radiation is driving the virulence of many of the microbes that are naturally in us,” Dr. Klinghardt warns.

And chronic fatigue syndrome (CFS), a debilitating disorder defined by fatigue and pain, could be a “reaction” to the presence of EMFs, says Dr. Klinghardt.

Dr. Klinghardt is not alone – an increasing number of public health experts believe that prolonged exposure to EMFs should be a co-factor to consider in the treatment of CFS.  To get the real science about this topic: check out the work of Olle Johansson, PhD and the Bioinitiative Report 2012.


Dietrich Klinghardt, MD, PhD, founder of the Klinghardt Academy and lead clinician of Sophia Health Institute, studied medicine and psychology in Freiburg, Germany. Before becoming Medical Director of the Santa Fe Pain Center, he served as a full-time emergency physician.

Early in his career, he became increasingly interested in the issue of chronic toxicity involving heavy metals, environmental pollutants and electromagnetic fields.

He has been instrumental in advancing various fields within biological medicine, and his development of autonomic response testing has helped many practitioners to become accomplished integrative physicians.

Cannabis Oil Heals Infant's Cancer — Physician Calls Him 'Miracle Baby' Previous post
Connected To The Matrix: Americans Spend Most Of Their Waking Hours Staring At A Television Or Computer Screen Next post