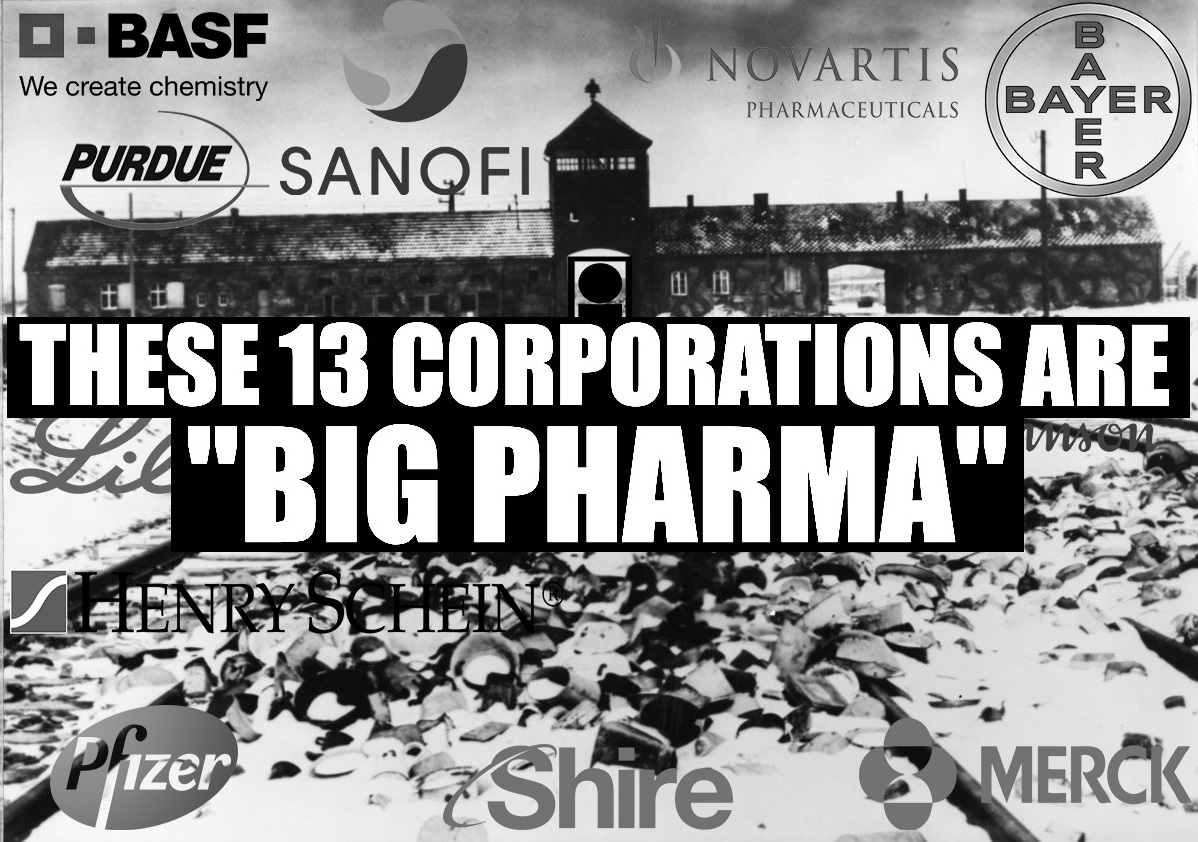 Exposing the 13 Corporations that Make Up the ‘Big Pharma’

In our society, we often correlate legality with safety.  We use household products, spray pesticides, and religiously consume drugs such as ritalin, adderall, oxycontin, and prozac.

We consume all of this, but how many know who made the drugs, and where the corporations came from? Who produces the chemicals we trust on a daily basis?

These 13 corporations tend to be a blind spot in our understanding of history.

Tens of thousands of American toddlers are being prescribed Amphetamine; a result of this blind spot. 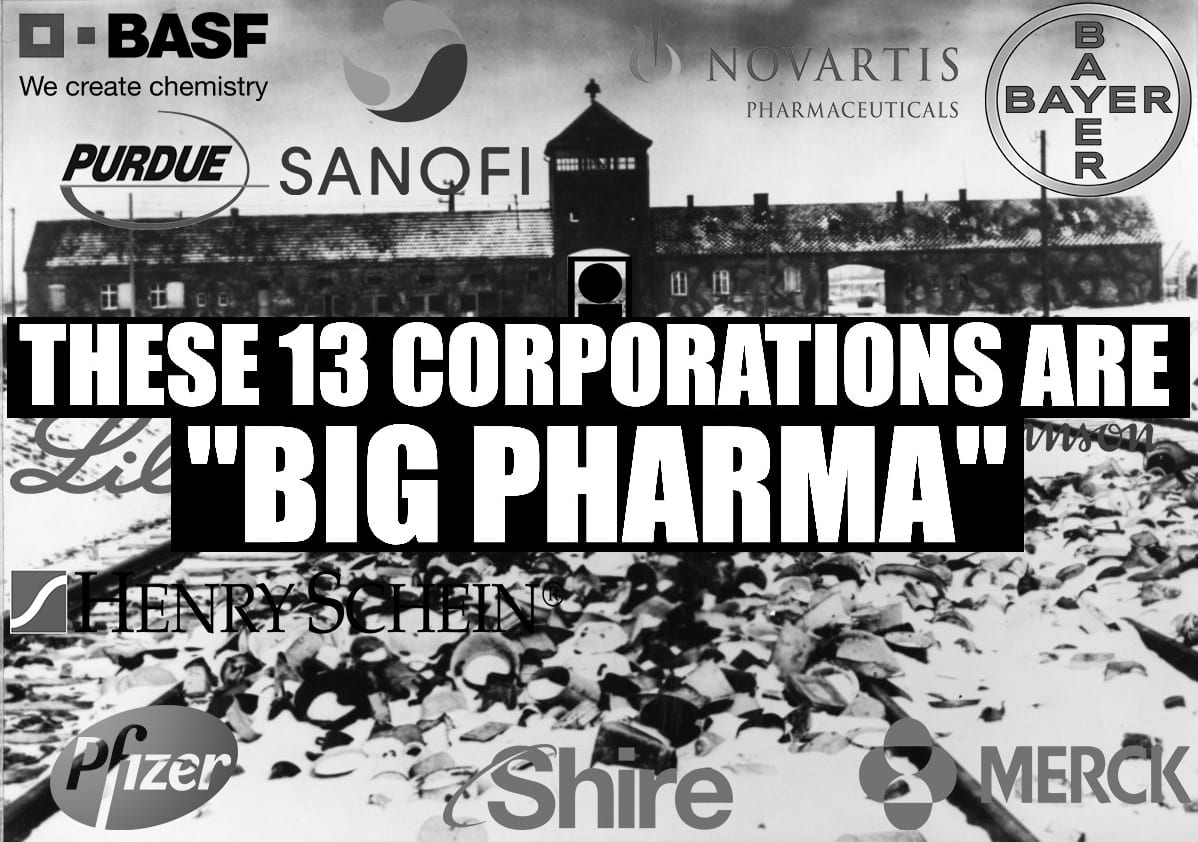 For instance, we have Purdue.

Purdue Pharma was created in 1892 New York. They are arguably responsible for the epidemic of opioid addiction in the United States, producing hydrocodone, OxyContin, fentanyl, codeine, hydromorphone, and oxycodone.

Novartis is the world’s largest pharmaceutical corporation by revenue, headquartered in Basel, Switzerland, a 1996 merger between Ciba-Geigy and Sandoz.

Novartis is responsible for many drugs, from Ritalin to LSD.

Novartis has a long criminal record. They are known for animal cruelty, from drilling the heads of cats open, to experimenting on primates.

Sandoz polluted the Rhine River in the 1986 Sandoz Chemical Spill.

Eli Lily was created in 1876 Indianapolis. They are responsible for Prozac, anti-psychotics, cancer causing bovine growth hormones in cows, and cancer drugs to treat the cancer they may have given people through IGF-1, a product of rBGH-treated cows.

The Nuremberg Trials of Nazi Germany produced three corporations on this list: German chemical cartel IG Farben was split into Bayer, BASF, and Hoechst (currently Sanofi). IG Farben was Hitler’s largest financial backer, and was vital to the extermination of millions in Auschwitz, supplying the poison gas and more.

Bayer merged into IG Farben Trust in December 1925, to become Bayer again after the Nuremberg trials.

Today, Bayer is known for giving thousands of children AIDS through tainted hemophiliac medicine, while internal documents prove they knew it was contaminated.

Bayer bought Monsanto in 2016 to create the world’s largest seed and pesticide company.

Oh, and they also made aspirin.

Sanofi, who absorbed Hoechst from IG Farben, is the world’s largest manufacturer of jjabs. They also produce the allergy medicine Allegra.

Severe psychosis in a BBC reporter following Sanofi’s Yellow Fever jjab is just the tip of the iceberg with this corporation.

BASF was another product of IG Farben. Unfazed by the Nuremberg Trials, today they are the world’s largest chemical corporation. They produce raw materials for pharmaceuticals, plastics, GM seeds, and more.

Johnson & Johnson is a household name, known for Splenda, Band-Aids, and baby powder. Unfortunately their famous talcum powder actually causes ovarian cancer, and they were forced to pay 72 million dollars to a woman who used their product religiously and got cancer.

Margaret Hamburg held the highest office at the FDA, commissioner, from 2009- 2015. She ensured Johnson & Johnson’s profits through minimal regulation, to ensure the profits of her husband’s hedge fund Renaissance Technologies, owning a large stake in J&J.

Hamburg’s father was president of Carnegie Corporation: both father and mother served as directors of the American Eugenics Society.

Toddlers on Amphetamine: History of Big Pharma and the Major Players (Full Documentary)

This is Era of Wisdom’s first full length documentary, “Toddlers on Amphetamine: History of Big Pharma and the Major Players.” It documents the full history of allopathic medicine, the hidden history of what we call “big pharma,” and how the world generally came to be the way it is today.

It examines the history of chemicals, poison in particular, disease, power, and psychopathy. It is completely free: free to republish anywhere with credit to Era of Wisdom, free to make physical copies of and spread everywhere.