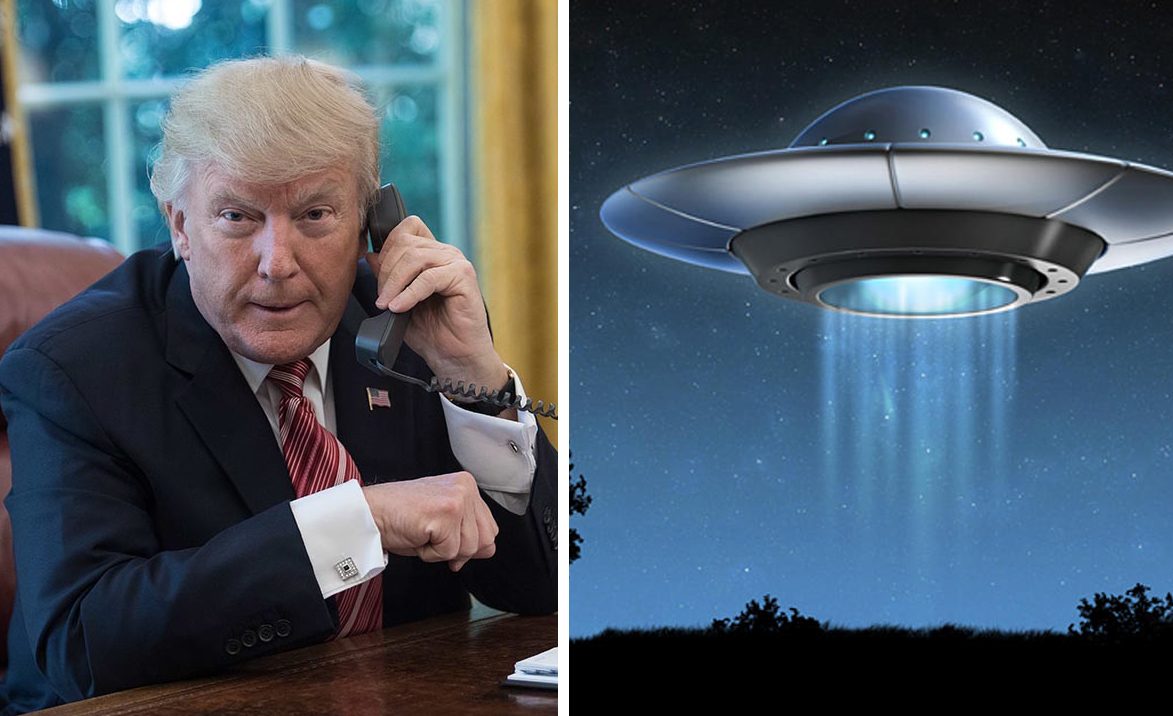 According To Steven Greer, Trump’s Administration Has Been Briefed About UFOs

What do presidents know about UFOs? Well, if you’re an avid researcher of the topic, you’ve probably realized by now that presidents don’t really have a “need to know” about these things.

The “military-industrial complex” that Eisenhower spoke of, which has become as uncontrollably powerful as he feared, has completely taken over operations that not even the president knows about. Many from within political realms who’ve held esteemed positions have spoken out about this fact.

Take Paul Hellyer for example, a former Canadian Defense Minister, who gave a lecture at the University of Toronto in 2008 where he said it is “ironic that the U.S. would begin a devastating war, allegedly in search of weapons of mass destruction when the most worrisome developments in this field are occurring in your own backyard.” 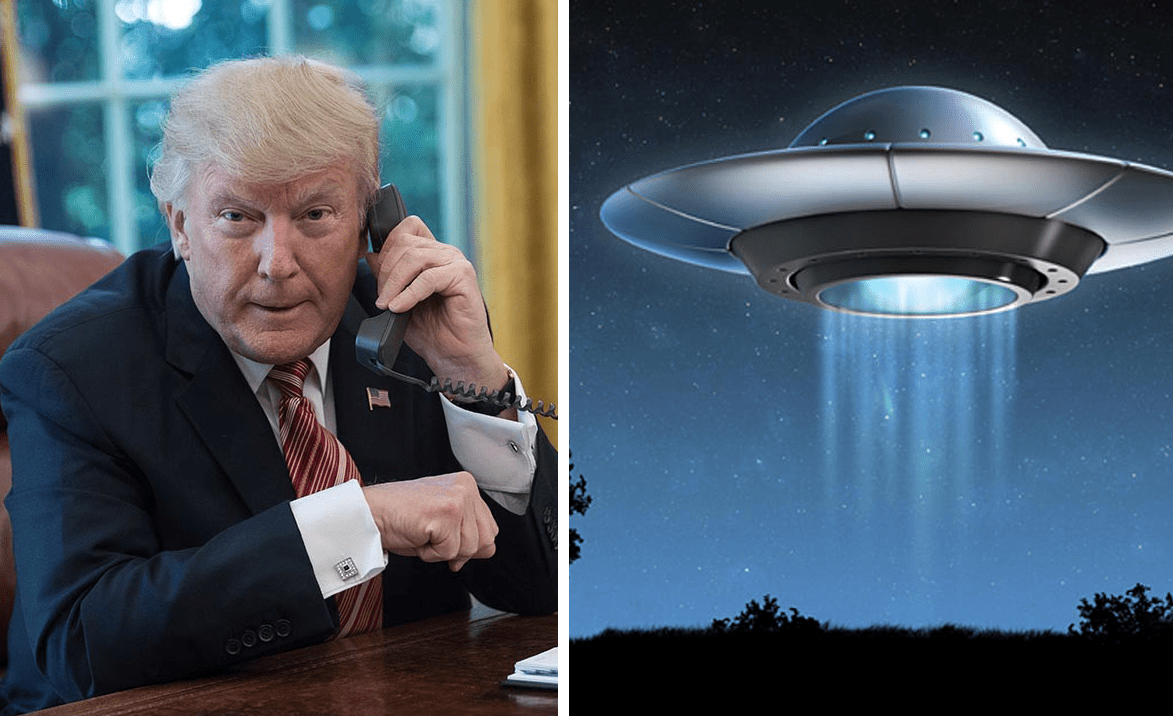 He was referring to black budget special access programs, which receive no oversight from Congress. This means that not even the government knows about the developments happening in this area, all for “national security” purposes.

“It is ironic that the U.S. should be fighting monstrously expensive wars allegedly to bring democracy to those countries, when it itself can no longer claim to be called a democracy when trillions, and I mean thousands of billions of dollars have been spent on projects which both congress and the commander in chief know nothing about.”

To The Stars Academy

It’s almost 2019, and the topic of UFOs has exploded into the mainstream, especially with former rock superstar Tom Delonge gathering defense intelligence officials, world-renowned scientists and more to relay this information to the public via the ‘To The Stars Academy.’ They’ve already released multiple videos of UFOs, and have publicly stated that there are programs within the government that study this phenomenon.

They have Luis Elizondo, a former director of a government ‘aerospace threat identification’ program. This was all disclosed via establishment mouthpieces like the New York Times and the Washington Post.

They’ve also admitted to recovering materials from these ‘unidentified’ objects. You can read the latest updates about what’s going on with that and mainstream UFO disclosure, in general, below.

The black budget is something we easily get information about, and for those who try to bring out information it is difficult to investigate. One example is the efforts of journalists Dana Priest and William Arkin of the Washington Post in 2010.

Their investigation lasted approximately two years and concluded that America’s classified world has “become so large, so unwieldy and so secretive that no one knows how much money it costs, how many people it employs, and how many programs exist within it or exactly how many agencies do the same work.” You can read more about that HERE.

Here is one of many statements from people who have been “in the know” so to speak. There are thousands of verified quotes on this subject, and we now have the electro-optical data and evidence to back up all of this witness testimony.

“We have, indeed, been contacted – perhaps even visited – by extraterrestrial beings, and the US government, in collusion with the other national powers of the Earth, is determined to keep this information from the general public.” (Second Look, Volume 1, No 7, Washington, DC, May, 1979)

What are the intentions of the cabal when it comes to UFO disclosure? We’ve been lied to about so many things by them, that it’s become hard to believe anything we hear from mainstream mouthpieces.

Presidents George Bush and Barack Obama, who I believe are establishment puppets, have brought up the subject, acknowledged it, but have refused to share any information on it. They did so in cryptic, often comedic ways on popular television, on the Jimmy Kimmel show. It’s hard to know what to make of their comments, or even their overall knowledge about this.

So What About Trump?

Has Donald Trump been briefed? Yes he has, according to Dr. Steven Greer.

Greer is the founder of The Disclosure Project, an initiative that has brought forth hundreds of military/ defense/ political personnel from all over the world, with verified credentials, to publicly share their testimony about their experiences with UFOs and extraterrestrials. He also released a film last year, called “Unacknowledged.”

It was one of the most popular, if not the most popular film on Itunes & Netflix in 2017. It’s highly recommended if you are new to this subject and don’t already know much about it.

Greer has amassed great credibility for his claims. For example, many years ago he claimed to have had meetings at the Pentagon with some very high-ranking people.

After this, Apollo astronaut Dr. Edgar Mitchell admitted that he also attended these meetings with Greer. What came out of these meetings is that not many people knew the details of this topic, nor wanted to discuss it.

He’s been able to develop relationships with individuals he has interviewed from various branches and ranks of the military as well as within the intelligence and defence communities.

In my opinion, Podesta, Clinton, Obama and Bush are all cabal puppets. Therefore, anything they say about terrorism, national security, or UFOs, is probably lathered up with some ‘disinformation’ soap.

Without this point, if we completely disregard it, there is still more than enough evidence to show that they are simply following the will of their masters. But that’s a topic for another article, back to UFOs!

Greer says he has briefed people close to Trump about the UFO / extraterrestrial issue in this interview. He has also claimed to have briefed past presidents, like Obama and Clinton, and provides those documents on his website, Sirius Disclosure. It seems credible, especially when his claim to have had high-level meetings within the Pentagon was verified by Dr. Edgar Mitchell.

White House press secretary Sarah Huckabee Sanders has so far not answered any questions that have been asked about UFOs.

Official Transcript: This is How the CIA Informed President Reagan About UFO’s

Will There Ever Be A Full Mainstream UFO Disclosure?

Given the fact that this topic seems to be controlled by a small group of very powerful people who gets to decide what humanity can and can’t know, I’d say that as long as this group maintains power, the reality of UFOs and extraterrestrial beings will be hidden from humanity in official channels. A censorship plan has also been spoken about for years by those within.

Roscoe Hiellenkoetter, the first director of the CIA, for example, pointed out decades ago in the New York Times that, “through an official campaign of secrecy and ridicule, many citizens are led to believe the unknown flying objects are nonsense.” He went on to state that they are operating under intelligent control.

That being said, there is a serious effort by multiple nations, and perhaps those within this power structure as well, to reveal these truths to humanity. This is evident by all of the whistle-blowers with verified credentials who have shared their experiences, as well as the release of evidence in the form of radar trackings and electro-optical data.

There is a serious push for mainstream disclosure, this can’t be denied and is quite evident by the article linked earlier. Establishment mouthpieces are slowly disclosing this reality.

In 1979 Spanish General Carlos Cavero told the world the following:

Why Any Disclosure At All?

Why would the New York Times, CNN and the rest of them share any of this truth? Can we believe what they say?

Perhaps not everything they say is false, but for years we’ve seen major geopolitical issues completely twisted by the mainstream media, and evidence of ‘perception manipulation’ that is fostered by their close relationship with US intelligence agencies.

There is also the testimony of multiple award-winning mainstream media journalists who emphasize how mainstream media outlets are paid by governments, corporations and intelligence agencies to present a specific narrative.

Is the establishment trying to lay the foundation for a ‘war against aliens’ like they made a ‘war against drugs’ and a ‘war terror?’ Or are we seeing the white hats within these groups push for the disclosure of information?

All this remains to be seen, but we must understand why this topic would be extremely difficult to disclose and to be honest, it’s probably a mix of both.

For one, you have the energy question. These crafts are clearly not using petroleum. Have we harvested technology from these crafts? If released, what would that mean for the oil industry and our economy? Who would benefit, who would lose?

What about the historical questions, the scientific questions? What about our laws of science and what we understand about ourselves and perhaps human origin? What about the idea that there are intelligent extraterrestrials surveying, visiting, and interacting with people here on Earth!

I’ve said it before and I’ll say it again, the disclosure of this information leaves no area of humanity untouched.

As you can imagine, it has tremendous implications and it’s something that would change the world forever. I am sure the existence of extraterrestrials and the fact that we’ve been visited and are being visited, is not even the tip of the iceberg when it comes to discovery.

Most important will be the impact on consciousness, the deeper investigation into metaphysical realities, and the validation of non-material science. One can expect that disclosure will impact our understanding of who we are and why we are here, and perhaps there is some sort of spiritual lesson to be reaped from the realization that we are not the only ones.

Whether We Can Handle the Truth or Not, Humanity NEEDS Full Disclosure

Humanity is just now waking up, and ready to take the steps necessary to move out of infancy. Understand “them” will help us to understand ourselves. We are all connected in some strange form, and the future is exciting.

It’s a topic that, most importantly, we DON’T have to be afraid of or react to with fear, despite the fact that that this type of reaction seems to have been programmed into us. We need to deprogram ourselves from what Hollywood has presented us with, and start to examine the actual evidence and what’s really going on here.

I don’t believe you have to be afraid to discuss or talk about this topic with your peers and your family anymore. It’s no longer taboo, and the more we speak up, speak out, and generate discussion, the closer we get to finding out what’s really going on. It’s definitely an exciting time to be alive.