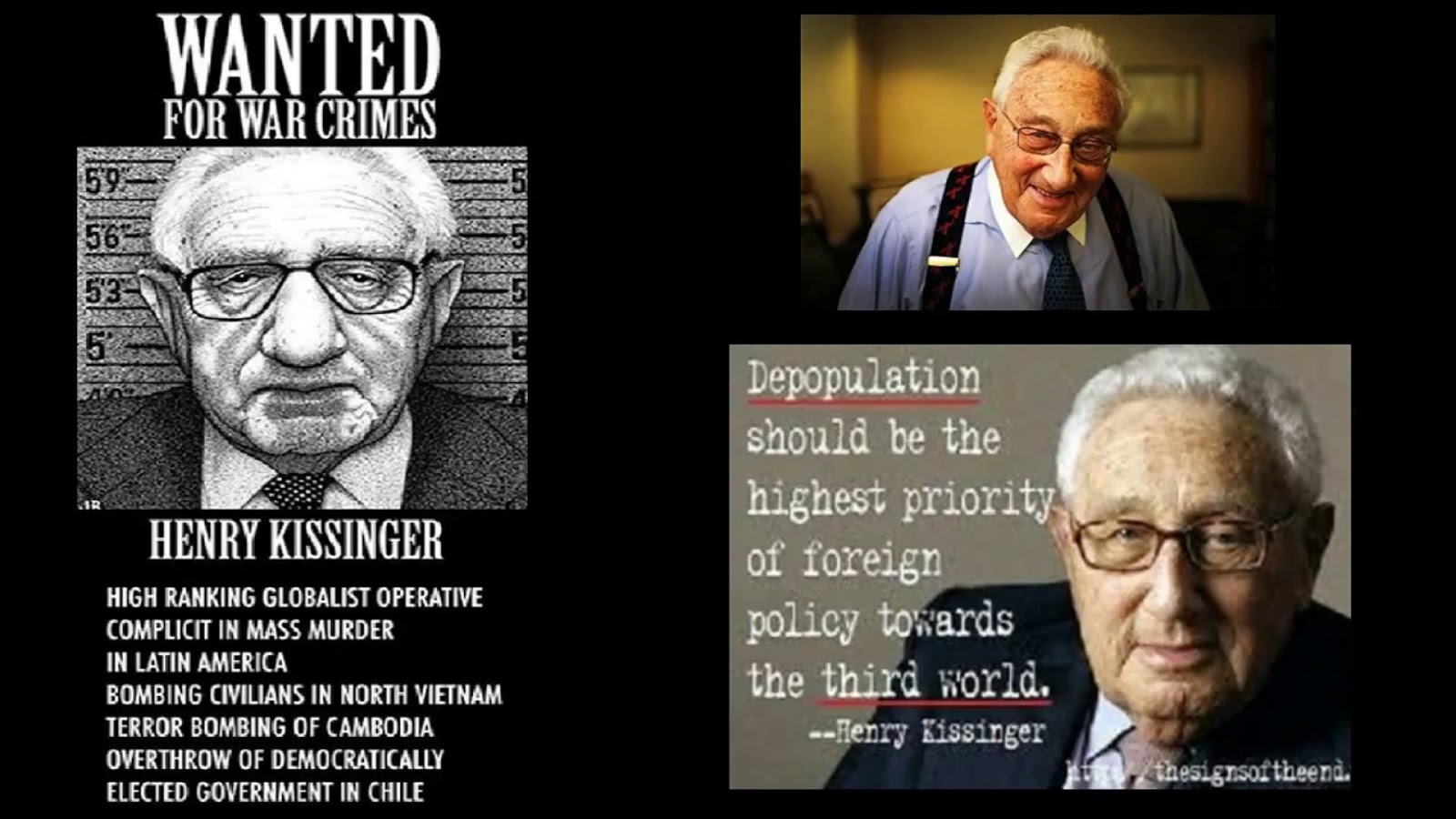 Henry Kissinger — The Man Behind Eugenics And Depopulation

Dr. Henry Kissinger, who wrote: “Depopulation should be the highest priority of U.S. foreign policy towards the Third World.”

Research on population control, preventing future births, is now being carried out secretly by biotech companies. Dr. Ignacio Chapela, a University of California microbiologist, discovered that wild corn in remote parts of Mexico is contaminated with lab altered DNA. That discovery made him a threat to the biotech industry.

Chapela was denied tenure at UC Berkeley when he reported this to the scientific community, despite the embarrassing discovery that UC Chancellor Berdahl, who was denying him tenure, was getting large cash payments – $40,000 per year – from the LAM Research Corp. in Plano, Texas. 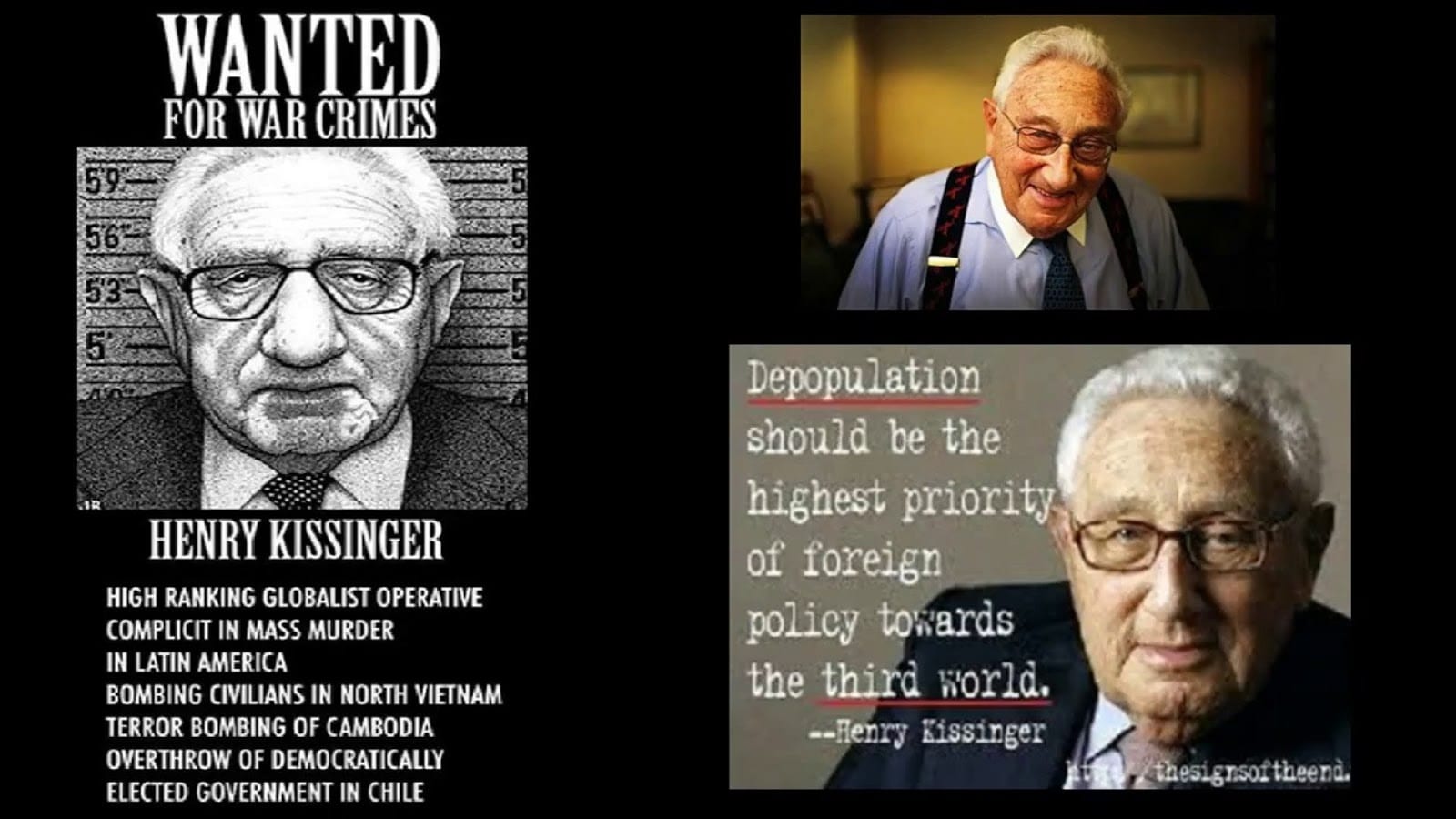 Berdahl served as president of Texas A&M University before coming to Berkeley. During a presentation about his case, Chapela revealed that a spermicidal corn developed by a U.S. company is now being tested in Mexico. Males who unknowingly eat the corn produce non-viable sperm and are unable to reproduce.

Depopulation, also known as eugenics, is quite another thing and was proposed under the Nazis during World War II. It is the deliberate killing off of large segments of living populations and was proposed for Third World countries under President Carter’s administration by the National Security Council’s Ad Hoc Group on Population Policy.

“Dr. Henry Kissinger proposed in his memorandum to the NSC that “depopulation should be the highest priority of U.S. foreign policy towards the Third World.” He quoted reasons of national security, and because `(t)he U.S. economy will require large and increasing amounts of minerals from abroad, especially from less-developed countries … Wherever a lessening of population can increase the prospects for such stability, population policy becomes relevant to resources, supplies and to the economic interests of U.S.

According to an NSC spokesman at the time, the United States shared the view of former World Bank President Robert McNamara that the “population crisis” is a greater threat to U.S. national security interests than nuclear annihilation.

In 1975, Henry Kissinger established a policy-planning group in the U.S. State Department’s Office of Population Affairs. The depopulation “GLOBAL 2000” document for President Jimmy Carter was prepared.

It is no surprise that this policy was established under President Carter with help from Kissinger and Brzezinski — all with ties to David Rockefeller.

The Bush family, the Harriman family — the Wall Street business partners of Bush in financing Hitler — and the Rockefeller family are the elite of the American eugenics movement. Even Prince Philip of Britain, a member of the Bilderberg Group, is in favor of depopulation:

“If I were reincarnated I would wish to be returned to earth as a killer virus to lower human population levels” — Prince Philip Duke of Edinburgh, leader of the World Wildlife Fund, quoted in “Are You Ready for Our New Age Future?” (Insiders Report, American Policy Center, December 1995).

Secretary of Defense Donald Rumsfeld has been proposing, funding and building Bio-Weapons Level 3 and Level 4 labs at many places around the U.S. even on university campuses and in densely populated urban locations. In a Bio-Weapons Level 4 facility, a single bacteria or virus is lethal. Bio-Weapons Level 4 is the highest level legally allowed in the continental U.S.

For what purpose are these labs being developed, and who will make the decisions on where bio-weapons created in these facilities will be used and on whom? More than 20 world-class microbiologists have been murdered since 2002, mostly in the U.S. and the UK. Nearly all were working on development of ethnic-specific bio-weapons.

Citizens around the U.S. are frantically filing lawsuits to stop these labs on campuses and in communities where they live. Despite the opposition of residents living near UC Davis, where a Bio-Weapons Level 4 lab was planned, it had the support of the towns mayor.

She suddenly reversed her position after a monkey escaped from a high security primate facility on the campus where the bio-weapons lab was proposed. Residents claimed that if UC Davis could not keep monkeys from escaping from their cages, they certainly could not guarantee that a single virus or bacteria would not escape from a test tube. The AWOL monkey killed the project.

Population is a political problem. The extreme secrecy surrounding the takeover of nuclear weapons, NASA and the space program and the development of numerous bio-weapons labs is a threat to civil society, especially in the hands of the military and corporations.

The fascist application of all three of these programs can be used to achieve established U.S. government depopulation policy goals, which may eliminate 2 billion of the worlds existing population through war, famine, disease and any other methods necessary.

Two excellent examples of existing U.S. depopulation policy are, first, the long-term impact on the civilian population from Agent Orange in Vietnam, where the Rockefellers built oil refineries and aluminum plants during the Vietnam War.

The second is the permanent contamination of the Middle East and Central Asia with depleted uranium, which, unfortunately, will destroy the genetic future of the populations living in those regions and will also have a global effect already reflected in increases in infant mortality reported in the U.S., Europe, and the UK.