A woman who was approved by the State of Arizona to adopt a child out of the foster care system is on trial for child abuse. Samantha Osteraas faces 2 counts of child abuse for scalding a little girl entrusted to her care, causing 3rd degree burns to almost 80% of her body, causing all 10 of her toes to be amputated, and nearly costing the child’s life.

During the trial, which is expected to end this week, 7-year-old Devani took the stand and told a jury that Osteraas held her down in the bathtub with a pink towel, according to the Arizona Daily Star.

She is only 7 years old, but the beautiful child known to family advocates as “the little girl in the blue dress” has been through more abuse than most of us can imagine.

Devani was taken at the age of 2 from her parents by Arizona’s Child “Protective” Services – the Department of Child Services (DCS), but she was never abused in her parents’ home.

Samantha Osteraas (left) stands trial for scalding a child she adopted (right), causing severe burns over most of her body. Photo source. Devani (right) was taken before her horrific abuse in state custody. Photo from the AZ Childrens Lives Matter Facebook page.

Her horrors began after she was in the custody of the State of Arizona. Before she was adopted by Samantha and Justin Osteraas, she was placed by DCS into a foster home with a man who is now serving prison time for running a pornographic and pedophile ring out of his home.

“Deputy Pima County Attorney Alan Goodwin told the jury of 11 women and three men — 12 jurors and two alternates — that the evidence likely won’t explain why Osteraas intentionally burned her daughter, but that it will prove she committed the act and failed to call 911 for several hours afterward.

The girl, who was 5 at the time of the incident, spent four months in a hospital after the scalding, undergoing “surgery after surgery after surgery” for skin removal and grafts. She also had to have all 10 toes amputated as a result of her injuries, Goodwin told the jury.

Detective Jeremy Butcher, the first responder to the scene, took the stand, testifying that he arrived at the house within minutes of getting the call because he lived in the neighborhood.

During opening statements, Goodwin called what Butcher saw when he entered the home “an image … an experience that’s absolutely seared in his mind and seared in his memory forever.”

Deputy Pima County Attorney Dawn Aspacher had Butcher tell the jury what he saw and heard at the home, starting with a bloody smear on the front door.

Butcher said Osteraas was distraught as he walked to the master bedroom, where he found the child on the floor, her body a “dark-reddish and almost purplish hue.”

The child’s lower half was covered with a towel and a red stain was visible on the floor underneath her. The child wasn’t speaking or crying, but was “basically just staring straight up,” Butcher told the jury.

One juror wiped his eyes while Butcher recounted how he stayed with the girl until paramedics arrived. While her breathing was labored, he said, at one point she reached up towards the star-shaped badge pinned to his uniform shirt.

After the girl was taken to the hospital, Butcher and other deputies searched the home, finding what later turned out to be chunks of skin in several locations throughout the house, including the bathroom in which the child was bathed. 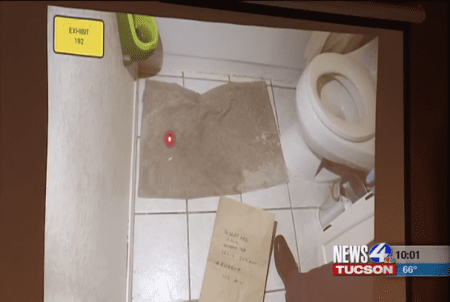 Photo of the floor of the bathroom where Devani was burned. Photo source.

During Butcher’s testimony, Aspacher projected photos of the girl before she was taken to the hospital on one of the courtroom walls, the girl’s beet-red skin eliciting gasps from the gallery.

Butcher’s testimony ended with a photo of a large chunk of skin next to the bathtub’s drain. Several jurors stared up at the screen even after the courtroom lights had been turned on and the image was no longer visible.”

“According to court records, Osteraas said she didn’t realize the bath water was that hot.

Investigators said the water was almost 130 degrees and determined the burns were not the result of an accident.”

In anticipation of the possibility of Devani being able to testify in court, News 4 Tuscon reported last week that:

“The Pima County Attorney’s Office has asked the court to allow a so-called facility dog, a specially trained K-9, to help ease the girl’s stress while she testifies against the woman that she had once called her mom.”

On Friday, October 12, Devani took the stand to tell the jury what happened to her.

“A 7-year-old girl who Pima County prosecutors say was intentionally scalded by her mother told jurors Friday that her mother held her down in a tub of hot water and prevented her from getting out.

Prior to the child’s testimony, her attorneys filed a motion with Pima County Superior Court Judge James Marner to clear the courtroom of the more than 30 spectators packed into the gallery.

While Marner denied the motion, citing concerns for Osteraas’ right to a fair trial and potential for a mistrial if the public’s access was limited, he ordered that the girl’s biological parents and grandmother — whose rights had previously been severed — would not be allowed in the courtroom during her testimony, after the child’s therapist and a clinical psychiatrist submitted letters detailing the potential damage to the girl.

Wearing a pink-and-beige striped dress and a pink bow in her hair, the child took the witness stand, clutching a stuffed animal throughout the 20-minute questioning.

The girl told Goodwin she’d been burned “in a hot bath” and that her mom “put her in there” and said she had to stay, before holding her in the tub with a pink towel.

Goodwin asked the child about the brown shirt she wore under her dress, a medical garment designed to help the scars go away. The girl said she had scars on her back, tummy and legs.

According to several news sources, the defense has taken the position that the scalding was unintentional and that Samantha Osteraas did not knowingly hurt the child.

Note: the defense that parents did not intentionally cause harm, even when demonstrably true, is generally not accepted in cases involving biological parents.

Child Protective Services routinely takes children and condemns biological parents even when they had no way of knowing about or preventing harm that came to their children.

See the stories of Matthew Marble in Tennessee and Kaya Thomas in South Carolina, who lost their children over something someone else did. Other parents are often held responsible for broken bones when the child has a medical condition they had no idea existed. See stories.

The trial for Samantha Osteraas is expected to end sometime this week.

Abuse Began in Foster Care, Not at Home

Devani was originally taken from her home after an argument between her parents which was falsely reported by a vindictive neighbor to involve domestic violence. The 2-year-old wasn’t even home at the time, but at her grandmother’s house.

After Michelle Tremor-Calderon provided proof that the charges were dropped, the social worker insisted that she take a drug test based on rumors from the neighbor.

Michelle passed easily. She had a history of drugs from 13 years prior, but that had long since been in the past.

Health Impact News investigated Devani’s story and learned that the original allegations against the parents were quickly proven to be baseless. Though they were dismissed, DCS kept the child in their custody. As we reported last year:

Without a shred of evidence, social workers allegedly were “concerned” about the possibility that the parents might, in the future, do something that would cause harm to their child, so DCS kept Devani in their custody, placing her in very real, and unimaginably horrific, foster care situations.

It often seems that social workers are willing to dig deeper into biological family history than the history of the people that they place children entrusted to their care with.

In Devani’s first foster home, there were scratches and bruises almost immediately. After Michelle complained, the foster person dropped the child off at DCS and washed her hands of the situation.

The second situation was far worse. Devani was placed in a house with foster parents, one of whom is currently serving a 17-year prison sentence for his prominent role in running a pornographic pedophile ring out of his house with the foster children that DCS placed with him.

Law enforcement discovered a graphic video in David Frodsham’s house with a little girl crying out for her mother as she was being sexually assaulted.

Devani’s mother had long been reporting signs that her daughter was being molested in foster care, but social workers and the attorney appointed by the court to represent Devani, Thea Gilbert, told the court that the mother was simply “interfering with placement.”

Instead of recognizing that the woman who gave birth to the child had that “mama’s gut feeling” that something was horribly wrong, state employees accused Michelle of sabotaging the department’s efforts.

DCS looked the other way when Devani and other foster children in the Frodsham house of horrors showed clear signs of being victims of sexual abuse. It took the federal ICE agency to bring a stop to David Frodsham pimping out foster children in his house as part of his pedophile ring.

The department refused to return Devani to her parents. DCS terminated parental rights, refusing all along to allow the child to live with any family members.

Out of the Frying Pan into the Fire

Guardian ad Litem, Thea Gilbert, was Devani’s attorney
through the years all the terrible abuse happened to her. Source.

DCS then placed Devani with the Osteraas family. Attorney Thea Gilbert had previously argued that David Frodsham should adopt Devani. Gilbert has remained Devani’s Guardian ad Litem throughout the child’s DCS history, and she approved the new placement. Samantha and Justin adopted Devani out of foster care and changed her name.

It was after this that Devani’s life almost ended after being allegedly held down in a scalding hot bathtub. Mercifully, Devani is still alive and was able to testify in the Osteraas trial on Friday about what happened.

We will follow the story and update readers after the jury renders a decision. 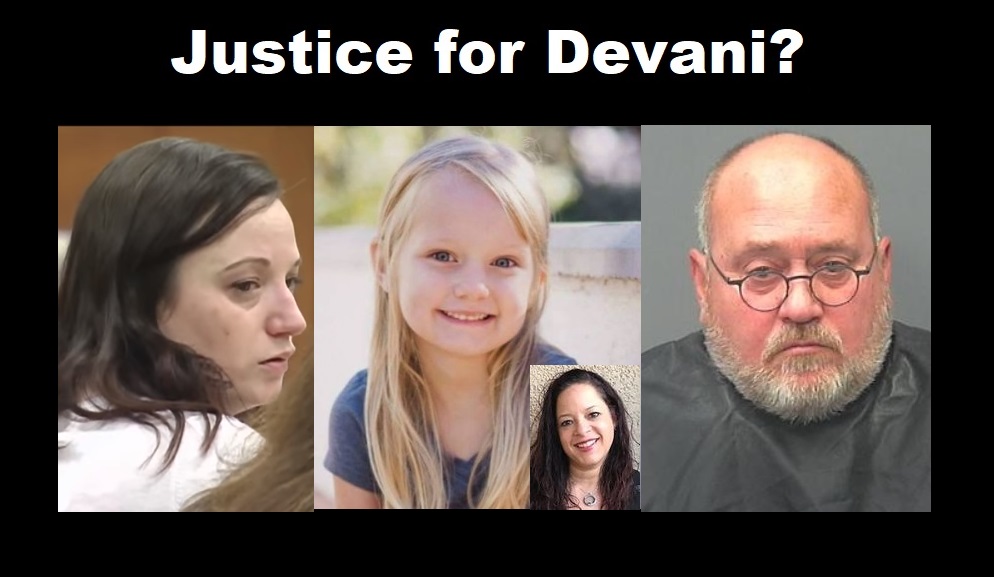 Many times at Health Impact News, we have cited data that shows that children are at least 6 times more likely to be raped, molested, abused, or killed in foster care than if they had been left in their own homes, even if that home is less than perfect.

Devani’s story is a chilling indication of this reality.

Another reporter with the Arizona Daily Star, Tim Steller, also challenges the knee-jerk reaction to remove children from their home “just in case.” He wrote this while Devani was still in the hospital after being abused in her adoptive home:

“We’re used to seeing how risky it can be for a child to stay with no-good parents.

That’s because time and again over the last decade, we’ve learned of local kids whose families were under the scrutiny of the state child-welfare agencies but ended up dead at the hands of their parents anyway.

They conditioned the public, legislators and child-protective workers to react conservatively to avoid death and scandal. Taking kids out of questionable homes seems the safe alternative.

But the story of a 5-year-old girl, still clinging to life at Banner-University Medical Center and reported in the Star last Sunday by Patty Machelor, shows there’s another side to those decisions: The risk that life outside a child’s borderline home may be worse than it is inside.” [Emphasis added by HIN.] (Source).