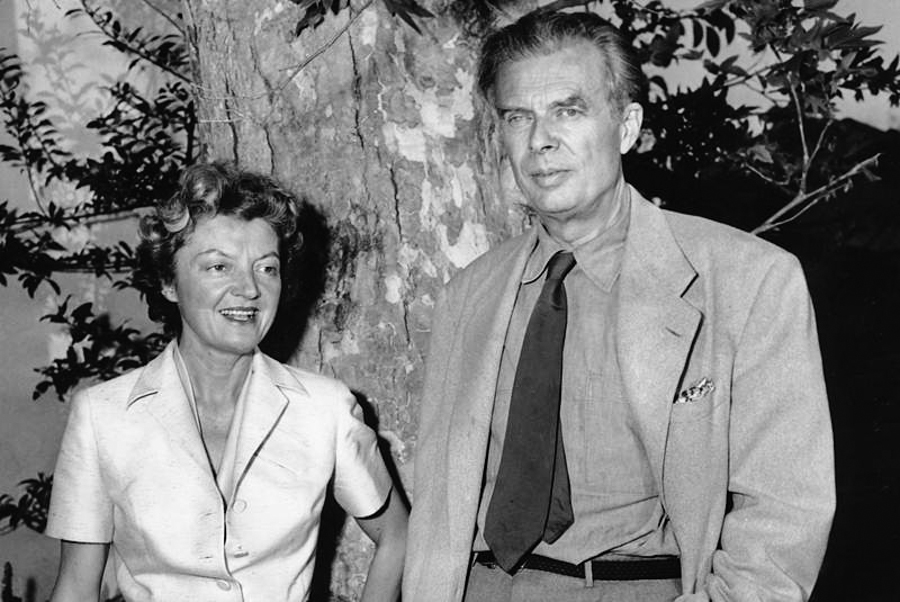 When Aldous Huxley Left This World Tripping on LSD, Experiencing “the Most Serene, the Most Beautiful Death”

When Aldous Huxley, Dying of Cancer, Left This World Tripping on LSD, Experiencing “the Most Serene, the Most Beautiful Death” (1963)

The “spiritual adepts” of Tibet’s modern period, writes Huston Smith in his comprehensive introduction to the Bardo Thodol, or “The Tibetan Book of the Dead”, “were inner-world adventurers of the highest daring, the Tibetan equivalent of our astronauts — I think it is worth coining the term ‘psychonaut’ to describe them.

“They personally voyaged to the furthest frontiers of that universe which their society deemed vital to explore: the inner frontiers of consciousness itself, in all its transformations in life and beyond death.”

Western modernity — its energies focused entirely on shaping, subduing, and expropriating the material world — did not begin to take such complex inner journeys seriously until the 20th century.

When it did, it did so largely through the popular influence of pioneers like Aldous Huxley and Timothy Leary, who introduced the inner journey through a syncretism of Eastern spirituality, Indigenous religious practices, and psychotropic drug use — something of an accelerated course to the frontiers of consciousness for those who had failed for so long to investigate its limits. 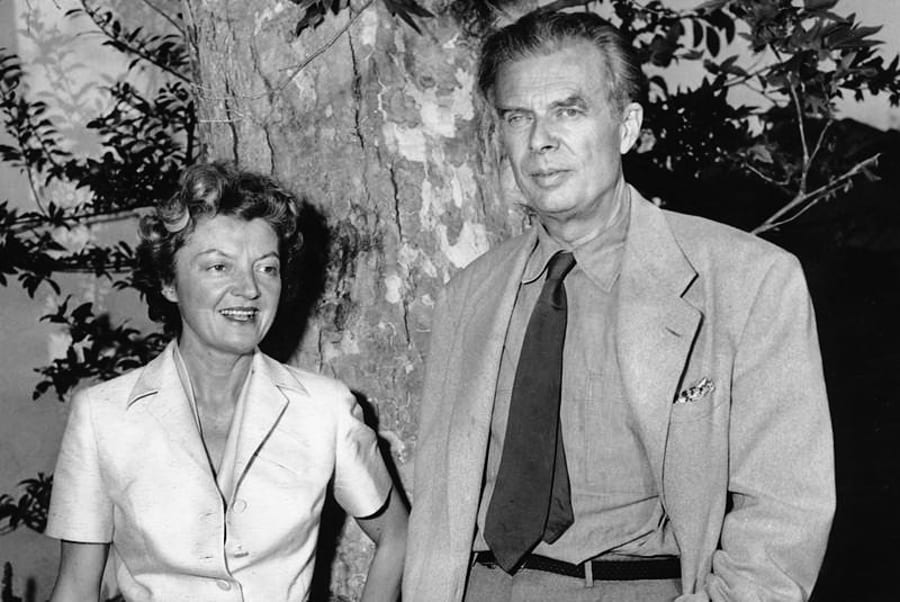 Huxley’s first psychedelic experience, described in his 1953 The Doors of Perception, “was in no sense revolutionary,” he wrote, in that he did not, as he had expected, experience “a world of visions” like those in the Bardo or the writings of William Blake.

On the other hand, he describes a shift in consciousness in exactly the terms spiritual practitioners use to talk about enlightenment. He references Meister Eckhart’s Istigkeit or “Is-ness”—“a perpetual perishing that was at the same time pure Being.”

He uses words like “grace” and “transfiguration” and refers to D.T. Suzuki’s essay “’What is the Dharma-Body of the Buddha?’” — “another way of saying Mind, Suchness, the Void, the Godhead.”

His faith in this experience persisted to the end of his life. It was, for him, an initiation, a “great change… in the realm of objective fact.” So profound were Huxley’s experiments with psychedelic drugs that on his deathbed ten years later, he requested that his wife Laura inject him with 100 micrograms of LSD. 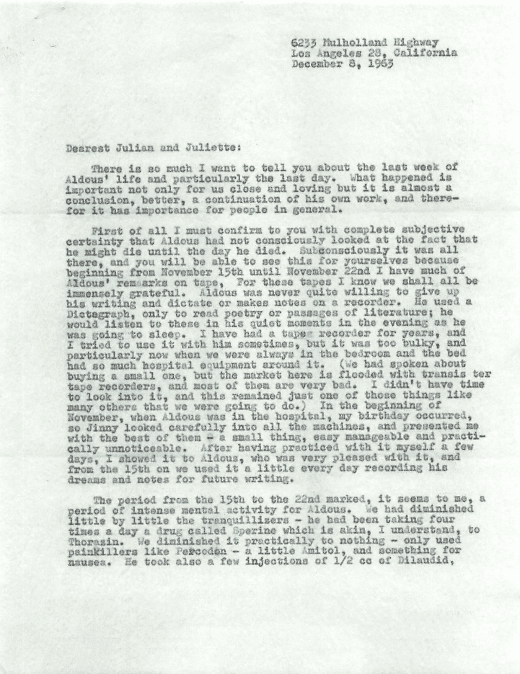 In the short video up top, Laura remembers the day, the same day John F. Kennedy was assassinated. And in the letter above, which you can read in full at Letters of Note, she describes Huxley’s last days in vivid detail to Huxley’s brother Julian and his wife Juliette.

According to Laura, Huxley struggled in his last two months to accept the fact that he was dying of cancer. She read to him, she writes, “the entire manual of Dr. Leary extracted from The Book of the Dead.” Huxley reminded her that Leary used the manual to guide people through their acid trips, and that “he would bring people, who were not dead, back here to this life after the session.”

After several painful days, however, he came to terms, “all of a sudden,” and made out his will. Laura had already consulted with Sidney Cohen, “a psychiatrist who had been one of the leaders in the use of LSD” and learned that Cohen had given the drug to two dying patients; “in one case it had brought up a sort of reconciliation with Death, and in the other case it did not make any difference.”

After she had offered it to Huxley several times over those two months, he finally wrote out his instructions to her for the dosage. She injected it herself, then, a few hours later, gave him another 100 micrograms.

“These five people all said that this was the most serene, the most beautiful death. Both doctors and nurse said they had never seen a person in similar physical condition going off so completely without pain and without struggle.

“We will never know if all this is only our wishful thinking, or if it is real, but certainly all outward signs and the inner feeling gave indication that it was beautiful and peaceful and easy.”


You can hear Laura discuss Huxley’s LSD-assisted death in much more detail in a conversation here with Alan Watts, who calls it a “highly intelligent form of dying.” In her letter, she defies the judgment that Huxley’s use of psychedelic drugs, in life and death, was irresponsible or escapist.

“It is true we will have some people saying that he was a drug addict all his life and that he ended as one,” she writes, “but it is history that Huxleys stop ignorance before ignorance can stop Huxleys.”

Indeed, in the same year that Aldous died, his brother Julian — the renowned evolutionary biologist — published an article called “Psychometabilism” in the second issue of The Psychedelic Review, the research journal co-founded by Leary.

“In psychedelic drugs,” wrote Julien, “we have a remarkable opportunity for interesting research.”

Likewise, he argued, “mysticism is another psychometabolic activity which needs much further research… some mystics have certainly obtained results of great value and importance: they have been able to achieve an interior state of peace and strength which combines profound tranquility and high psychological energy.”

In his informal, literary way, Aldous Huxley conducted such studies with himself as the subject, and wrote of the results and possibilities in books like The Doors of Perception and Island.

A few years after Aldous Huxley’s death, the US and UK governments banned the kind of psychedelic research Julien recommended, but it has recently become a serious object of scientific study once again, and thanks to the reporting, and experimenting, of writers like Michael Pollan, Westerners may soon once again use psychedelics to take the inner journeys our culture does its best to discourage and denigrate.