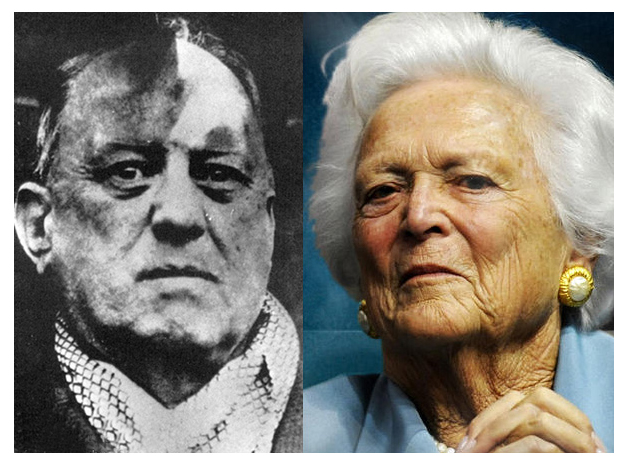 Was Barbara Bush the Daughter of Famous Satanist Aleister Crowley?

The Bush family are by far, the greatest example of a successful American crime family. No other American family can claim the kind of success that the Bush family has, over the past century. We must give credit, where credit is due. Right?

Samuel Bush was a very successful businessman. He was Skull & Bones I believe. He was instrumental in organizing the military industrial complex, with the Harriman family, and the Remmington gun & ammo company.

Together, they conspired to orchestrate WWI, and made many billions of dollars in 1917 money. That would make them trillionaires by today’s standards, which they in fact are. 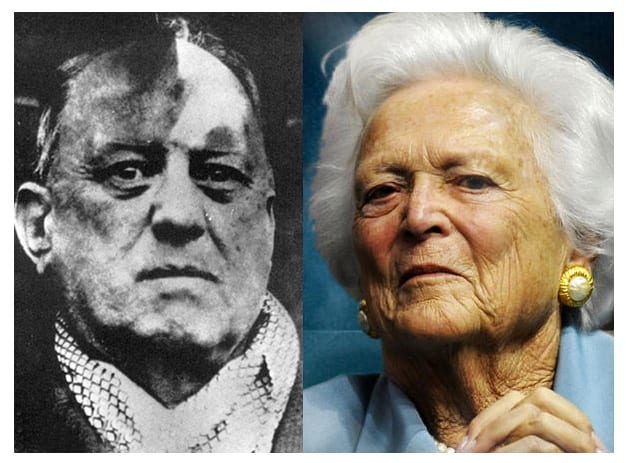 Samuel’s son, Prescott, was another very successful business man. He began as an amazing tire salesman, then by marrying into the Walker family, he became a banker with Brown Brothers – Harriman.

BBH, along with another Zionist banking cartel, known as Kuhn Loeb & Company, conspired to orchestrate WWII, and the Nazi takeover of Europe.

In fact, Prescott Bush, and his close Skull & Bones buddy, Averill Harriman, had a bank in Manhattan, N.Y., which had it’s assets seized by J. Edgar Hoover, and the FBI, under the “Trading With The Enemies Act”. That happened not once, but twice, to the Union Banking Corporation of New York City. A documented fact, which is undeniable.

Prescott’s son, George H.W. Bush, is also a very successful businessman, politician, and CIA agent. Most people don’t know that G.H.W. Bush was in fact a CIA agent as early as the late 40’s, or very early 50’s.

You can read more about him in this article: George H. W. Bush Pedophile Sex Ring and Blackmail of Congress

Nobody is 100% sure when he became an agent, but we do know for sure it was before 1953. We now know that he was directly involved, and responsible for the orchestrated assassination of JFK, and RFK. That too is a documented fact, which somehow has managed to avoid major exposure.

We know as a fact that Prescott Bush groomed Richard M. Nixon for his political career, and was expected to have G.H.W. Bush on the 1968 Republican ticket as Nixon’s Vice Presidential running mate, but Nixon knowing what Bush did to JFK because he was in Dallas that day, chose Agnew as his running mate because he knew Bush would assassinate him in order to be President without being elected.

“The Watergate break-in was strictly based on one thing – the pedophile records that were being kept at the Democratic National Headquarters.” – Det. James Rothstein, NYPD, Retired (read more HERE)

When Nixon refused to go along with the plan, Bush, and his CIA cohorts, conspired to destroy Nixon’s political career in the Watergate scandal, which worked brilliantly. Bob Woodward himself was a CIA stooge, from the Office Of Naval Intelligence.

All the while, Nixon, the ass and evil scum that he was, was busy escalating the war in Vietnam by invading, and carpet bombing Cambodia. Remember?

At this same time, G.H.W. Bush’s son George W. Bush was supposed to be in the Texas military reserves. He was assigned to a unit known as the “Champagne Unit”. They were the brave soldiers that patrolled the skies of Texas, looking for Vietnamese invaders.

The problem is that G.W. Bush never completed his service as a reserve pilot, and went AWOL from a base in Louisiana, and was never seen again at any military base.

Nobody has ever come forward and claimed to have ever even seen G. W. Bush at any military base in Louisiana, but he claims he graduated from there. BTW, it’s a Federal Offense to go AWOL, especially at a time of war.

George H.W. Bush had many different business’, all of which were quite successful, for rather mysterious reasons. Zapata Oil, Zapata Offshore, Dressor Industries, and a bunch of others are all very suspicious. His business ties in Columbia are interesting to say the least, not to mention his friends in Panama, and other Central American nations.

One of H.W.’s closest CIA buddies, a piece of garbage known as Allen Dulles, was a prominent attorney for United Fruit Co., and had strong business interests in Central America.

Together, Bush and Dulles assassinated a president, orchestrated a CIA war in Vietnam, and used the military to import drugs into the US.

Let’s not forget they had a huge Nazi mind control program going on at this same time where they were using LSD, and rock musicians to experiment on the American, British, Canadian, and other nations civilians without their knowledge or consent.

The program was, and still is known as Operation MK-Ultra, which was in fact a Nazi mind control program that was brought to America under Operation Paperclip.

Many of us are familiar with George W. Bush, and his criminal activities involving the conspiratorial orchestration of 9-11 with the Mossad of Israel, and British agents as well. These criminals have targeted the American people, and America as a sovereign, independent nation, which it isn’t, and probably never really was, especially after the establishment of central banking in America.

Particularly the Federal Reserve Bank, which is an illegal private bank, and was created by a man named Paul Warburg, who was a Satanic Hebrew Zionist, and an agent of the Rothschild family of Bavaria, along with the Oppenheimer, and Schiff families as well.

Schiff went on to fund the Bolshevik Revolution of Russia, which murdered tens of millions of Orthodox Jews, and paved the way for Marxist Communism, and a convenient enemy of America.

America is in fact a Zionist nation, and America has been controlled by Satanic Ashkenazi Hebrew Zionists for more than the past century, at least. Great Britain, much longer than that, thanks to the Rothschild family. They bring war, misery, and human suffering wherever they set foot, or have business interests.

Jeb Bush is a British agent. His entire family are elite blood lines of Europe, or Great Britain. They definitely have very strong ties in Scotland, especially with the Gammell family. Bill Gammell is, or was G.H.W. Bush’s very close friend. The purpose of the Bush family is to behave like a parasite. Sucking the blood and life force from it’s host.

The Bush family have done an extraordinary job at sucking the blood of the American people, as well as the monetary life force of this nation, by creating fake terror attacks, and fake wars, just to make profits, and exhaust the monetary system to the point of weakness, if not collapse.

I truly feel sorry for any American that is naive enough to vote for a criminal, who is a direct descendant of a long line of criminals. A true “Crime Family”, and Satanic to boot. Anyone who has investigated Skull & Bones of Yale University knows that they do in fact act out Satanic death rituals, as well as Satanic sex rituals.

CIA whistleblower, Dr Sue Arrigo, has recently accused George H. W. Bush of killing children, as well as being involved at the highest levels in trauma-based mind control programs, child and drug trafficking. You can read everything HERE.

Now we can see why war, death, and misery is so vital to the Bush family. It’s literally a religious sacrament to them to see blood spill in the name of Satan.

Is Aleister Crowley the father of Barbara Bush?

When Crowley was 50 years old, he was residing in the home of Frank and Nellie O’Hara in Paris, France.

In early 1924, Nellie was visited by her American friend, Pauline Pierce, the wife of Marvin Pierce, president of the McCall Corporation, which published McCall’s and Redbook magazines.

During Pauline’s visit, Crowley underwent what he termed the “supreme ordeal”, an initiation into the Masonic Ipsissimus Grade — the highest magickal achievement in his Order.

The initiation rite included choosing one or more experienced attendants, charged with arousing and exhausting him sexually by every means possible, employing every artifice and stimulant. In that place and time, Nellie and Pauline were the most suited for this task.

Pauline returned to America, and on June 8, 1925, eight months after Crowley’s “supreme ordeal”, Pauline gave birth to a daughter she named Barbara. Barbara grew up to marry George H. W. Bush, who later became President of the United States. (Source)

Barbara Bush Daughter of Aleister Crowley (connecting all the dots in just 3 minutes):