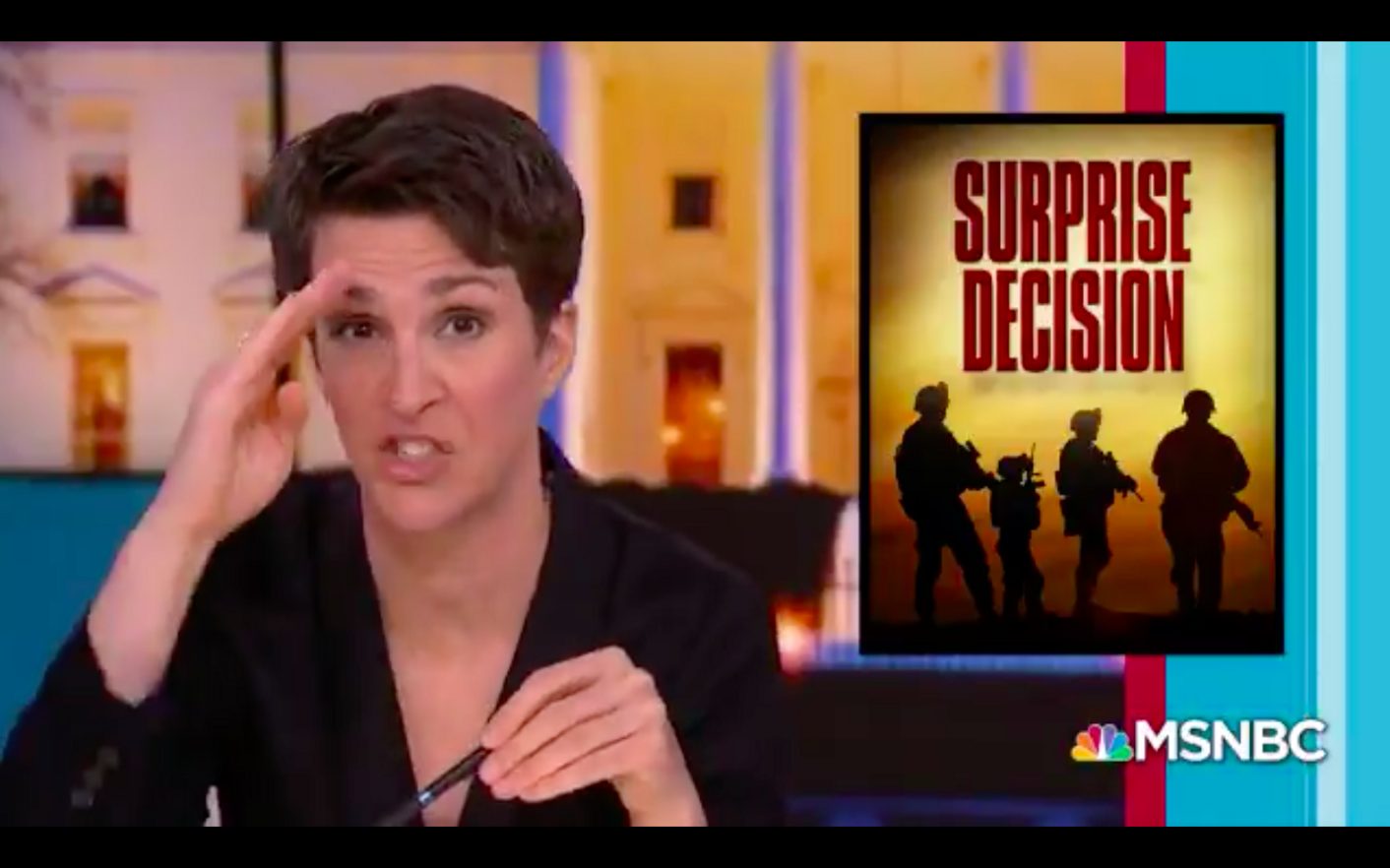 I’m having a hard time even picking out individual bits of the collective freakout from the political / media class to point at, because doing so would diminish the frenetic white noise of the paranoid, conspiratorial, fearmongering establishment reaction to the possibility of a few thousands troops being pulled back from a territory they were illegally occupying.

Endless war and military expansionism has become so normalized in establishment thought that even a slight scale-down is treated as something abnormal and shocking. 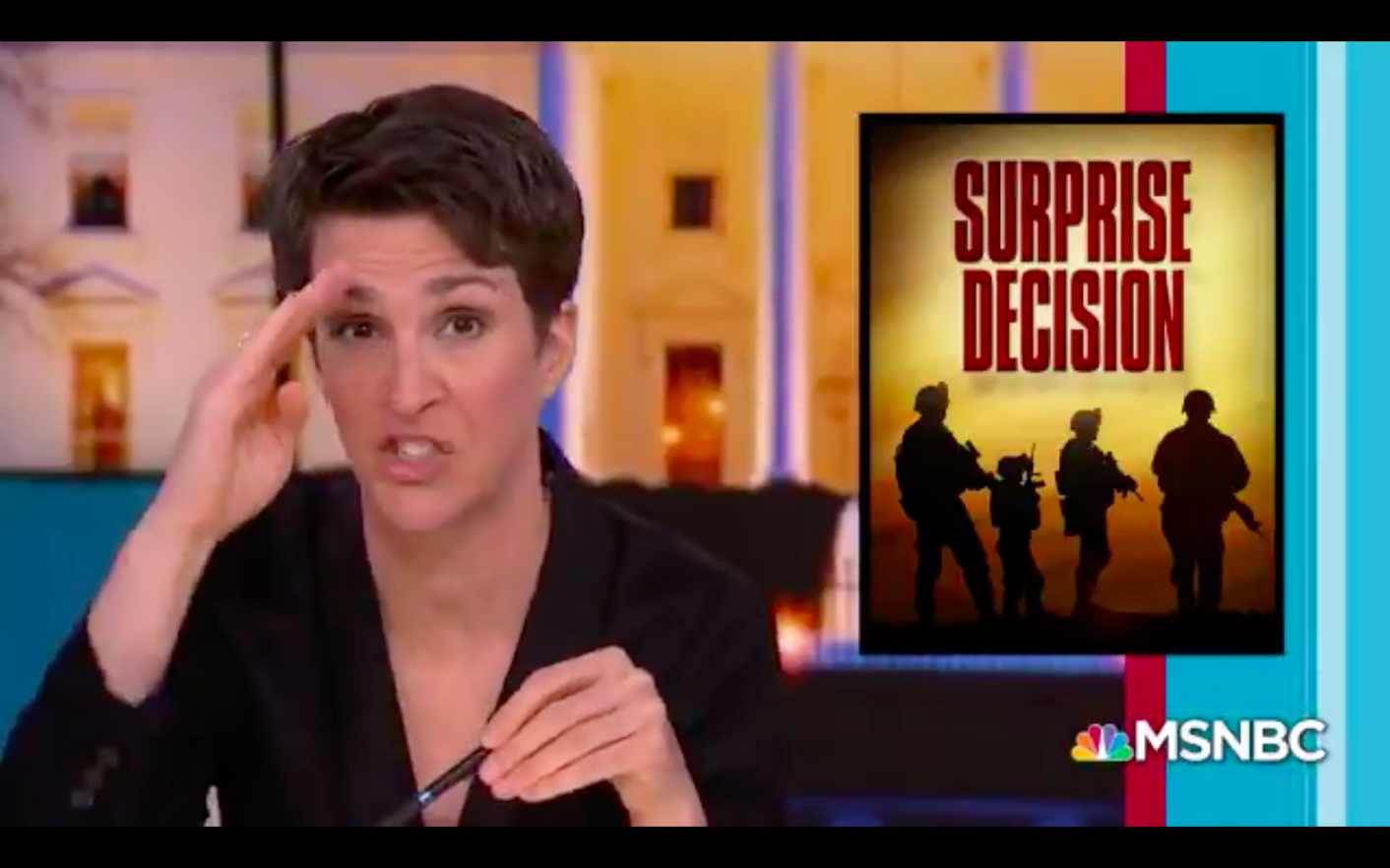 The talking heads of the corporate state media had been almost entirely ignoring the buildup of US troops in Syria and the operations they’ve been carrying out there, but as soon as the possibility of those troops leaving emerged, all the alarm bells started ringing.

Endless war was considered so normal that nobody ever talked about it, then Trump tweeted he’s bringing the troops home, and now every armchair liberal in America who had no idea what a Kurd was until five minutes ago is suddenly an expert on Erdoğan and the YPG.

Lindsey Graham, who has never met an unaccountable US military occupation he didn’t like, is now suddenly cheerleading for congressional oversight: not for sending troops into wars, but for pulling them out.

“I would urge my colleagues in the Senate and the House, call people from the administration and explain this policy,” Graham recently told reporters on Capitol Hill. “This is the role of the Congress, to make administrations explain their policy, not in a tweet, but before Congress answering questions.”

“It is imperative Congress hold hearings on withdrawal decision in Syria  —  and potentially Afghanistan  —  to understand implications to our national security,” Graham tweeted today.

In an even marginally sane world, the fact that a nation’s armed forces are engaged in daily military violence would be cause for shock and alarm, and pulling those forces out of that situation would be viewed as a return to normalcy. Instead we are seeing the exact opposite.

In an even marginally sane world, congressional oversight would be required to send the US military to invade countries and commit acts of war, because that act, not withdrawing them, is what’s abnormal. Instead we are seeing the exact opposite.

It is absolutely bat shit crazy that we feel normal about the most powerful military force in the history of civilization running around the world invading and occupying and bombing and killing, yet are made to feel weird about the possibility of any part of that ending.

It is absolutely bat shit crazy that endless war is normalized while the possibility of peace and respecting national sovereignty to any extent is aggressively abnormalized. In a sane world the exact opposite would be true, but in our world this self-evident fact has been obscured.

In a sane world anyone who tried to convince you that war is normal would be rejected and shunned, but in our world those people make six million dollars a year reading from a teleprompter on MSNBC.

How did this happen to us? How did we get so crazy and confused?

I sometimes hear the analogy of sleepwalking used; people are sleepwalking through life, so they believe the things the TV tells them to believe, and this turns them into a bunch of mindless zombies marching to the beat of CIA/CNN narratives and consenting to unlimited military bloodbaths around the world.

I don’t think this is necessarily a useful way of thinking about our situation and our fellow citizens. I think a much more useful way of looking at our plight is to retrace our steps and think about how everyone got to where they’re at as individuals.

We come into this world screaming and clueless, and it doesn’t generally get much better from there. We look around and we see a bunch of grownups moving confidently around us, and they sure look like they know what’s going on.

So we listen real attentively to what they’re telling us about our world and how it works, not realizing that they’re just repeating the same things grownups told them when they were little, and not realizing that if any of those grownups were really honest with themselves they’re just moving learned concepts around inside a headspace that’s just as clueless about life’s big questions as the day it was born.

And that’s just early childhood. Once you move out of that and start learning about politics, philosophy, religion etc as you get bigger, you run into a whole bunch of clever faces who’ve figured out how to use your cluelessness about life to their advantage.

You stumble toward adulthood without knowing what’s going on, and then confident-sounding people show up and say “Oh hey I know what’s going on. Follow me.”

And before you know it you’re donating ten percent of your income to some church, addicted to drugs, in an abusive relationship, building your life around ideas from old books which were promoted by dead kings to the advantage of the powerful, or getting your information about the world from Fox News.

For most people life is like stumbling around in a dark room you have no idea how you got into, without even knowing what you’re looking for. Then as you’re reaching around in the darkness your hand is grasped by someone else’s hand, and it says in a confident-sounding voice, “I know where to go. Come with me.”

The owner of the other hand doesn’t know any more about the room than you do really, they just know how to feign confidence. And it just so happens that most of those hands in the darkness are actually leading you in the service of the powerful.

That’s all mainstream narratives are: hands reaching out in the darkness of a confusing world, speaking in confident-sounding voices and guiding you in a direction which benefits the powerful.

The largest voices belong to the rich and the powerful, which means those are the hands you’re most likely to encounter when stumbling around in the darkness.

That’s really all everyone’s doing here, reaching out in the darkness of a confusing world and trying to find our way to the truth. It’s messy as hell and there are so many confident-sounding voices calling out to us giving us false directions about where to go, and lots of people get lost to the grabbing hands of power-serving narratives.

But the more of us who learn to see through the dominant narratives and discover the underlying truths, the more hands there are to guide others away from the interests of the powerful and toward a sane society.

People aren’t sleepwalking, they are being duped. Duped into insanity in a confusing, abrasive world where it’s hard enough just to get your legs underneath you and figure out which way’s up, let alone come to a conscious truth-based understanding of what’s really going on in the world.

But the people doing the duping are having a hard time holding onto everyone’s hand, and their grip is slipping. We’ll find our way out of this dark room yet.