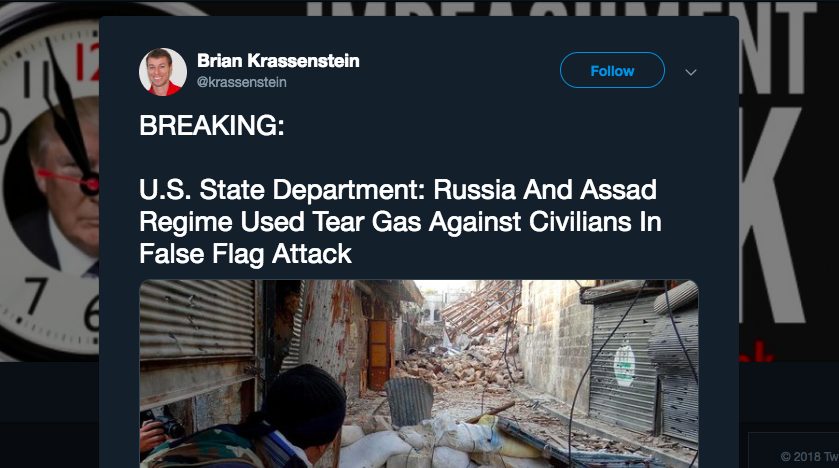 The US State Department has issued a statement accusing the Syrian government of having carried out a false flag chemical weapons attack in northwestern Aleppo with the intent to blame it on the jihadist factions in the region, citing “credible info” that the public has not been permitted to see.

Never mind the known fact that there are actual, literal Al Qaeda affiliates who have admitted to using chemical weapons in Aleppo, and who are known to have used chemical weapons throughout Syria even by the State Department’s own admission: the Official Narrative is that only the Syrian government uses chemical weapons, so the chemical weapons usage must necessarily be a false flag staged by Syrian president Bashar al-Assad. 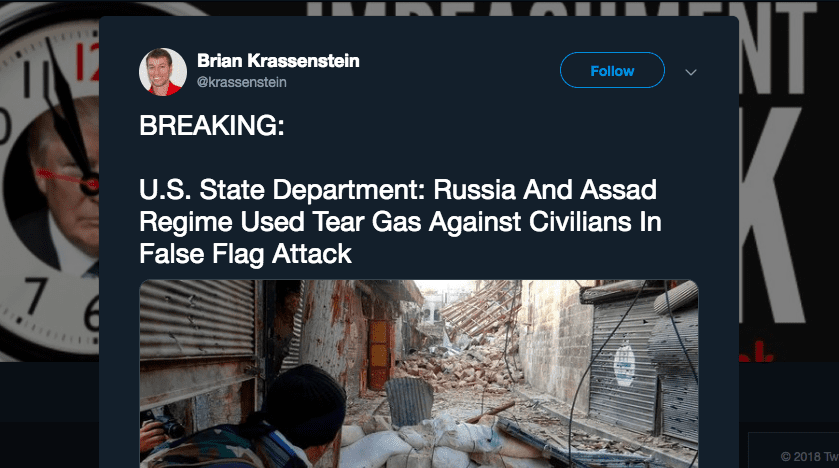 Except they didn’t use the words “false flag”. Despite the accusation being the exact definition of the thing that a false flag attack is, you won’t see the US government using that term, nor will you ever see it used in this instance by any of the authorized mainstream narrative-framing institutions like CNN or Fox News.

This is because the term “false flag” is reserved solely for mention when referring to crazy, kooky Kremlin propaganda, as in the insane, unhinged, tinfoil hat belief that terrorists in Syria might possibly have some kind of motive to stage a false flag chemical attack in order to get the US, UK and France to act as their air force in a retaliatory strike against the Syrian government.

That kind of false flag would be completely inconceivable to any right-minded empire loyalist, and is forbidden to even think about.

At the same time we are seeing a push from the mass media to advance a narrative that the Yellow Vests protests in France are due to Russian influence, with Iraq-raping neocon Max Boot publishing a column today in the Washington Post that is based entirely around the talking point that two trending Russian topics on social media have been “giletsjaune” and “France,” and Bloomberg putting out an article blatantly titled “Pro-Russia Social Media Takes Aim at Macron as Yellow Vests Rage”.

Their entire theory is that since there are people in Russia talking about a major event that everyone else in the world is also talking about, the protests against Macron’s unpopular centrist policies are therefore the result of a conspiracy seeded by Russia.

But you’ll never hear this theory about a Russian conspiracy referred to as a “conspiracy theory” by the mainstream press.

The theory that Russian elites have conspired to infiltrate the highest levels of the US government has been given serious treatment at the top echelons of media and political influence, despite its lacking any discernible evidence whatsoever, but when they talk about these alleged conspiracies they always make a point of using the word “collusion” instead.

There is no actual difference between the words collude and conspire when used in this way, but the former is used because a deliberate effort has been made to stigmatize the word “conspiracy” while the word “collude” remains effectively neutral in the public eye.

But the fact of the matter is that conspiracy theories have gone mainstream, and there is no legitimate reason to call the authorized, power-manufactured conspiracy theories by a different name than the grassroots narratives like those about 9/11 or the JFK assassination.

Indeed, due to the nature of populist folk narratives there is a lot more publicly available evidence contradicting the official 9/11 and JFK assassination stories than there is for the establishment Russia conspiracy theories, because those narratives often boil down to nothing more than secretive intelligence agencies saying “This is true because we said so.”

Since grassroots conspiracy theories are unable to rely on empty assertions from authority, they tend to be built upon information that is publicly available.

Some people get annoyed with me for using the term conspiracy theory at all, but I insist that the phrase is itself intrinsically neutral: a theory about a conspiracy.

The problem is not the phrase, it is the stigma that has been attached to that phrase by establishment media and establishment politicians; shifting to a different phrase to describe theories about conspiracies would only ensure that that phrase becomes stigmatized in the exact same way by the same sort of campaign.

This would only ensure the survival of the tactic of regurgitating a pre-stigmatized label in the war of ideas instead of advancing actual arguments. The fact of the matter is that powerful people do indeed conspire, those conspiracies do indeed need to be talked about, and the largest promulgators of conspiracy theories are not Infowars or RT, but mainstream media and the US State Department.

Those who dismiss an idea by calling it a “conspiracy theory” without providing further argumentation are simply admitting to you that they have no argument, and it is right to point this out when they do it, because something being a conspiracy theory doesn’t mean it’s not grounded in facts.

Some conspiracy theories are good and are backed by solid evidence, some are stupid and are circulated for intellectually dishonest reasons.

Once upon a time you would be called a conspiracy theorist for saying the west is arming terrorists in Syria or the DNC is conspiring to ensure the primary victory of Hillary Clinton; those things are now conspiracy facts, as history has vindicated the solid theories which predicted them.

Other conspiracy theories are subscribed to simply because they help people escape the cognitive dissonance of conflicting beliefs.

For example, a strong believer in capitalism who sees the undeniable signs that a plutocratic class has control of their government, but who cannot accept that this plutocratic takeover was facilitated by a rampant capitalist system which ensures that the greediest sociopaths rise to the top, may avoid cognitive dissonance by explaining the existence of the corrupt dominator class with conspiracy theories about Jews or pedovore cults.

A liberal who cannot accept that neoliberal empire loyalists like Macron have failed to “make centrism cool” as Max Boot predicted will avoid cognitive dissonance by explaining the failures of the Church of the Status Quo with conspiracy theories about Russian social media campaigns.

Conspiracy theories, in reality, are nothing more than people’s attempts to explain what is going on in their world. Why Trump got elected. Why things stay shitty despite our perfectly rational attempts to change them.

Why voting doesn’t seem to make much difference in the actual behaviors of one’s government. Why we keep marching into stupid wars, Orwellian dystopia and climate collapse despite having every incentive not to. Why the wealthiest of the wealthy keep getting wealthier while everyone else gets poorer and poorer.

And in my opinion the conspiracy theories coming from the world’s most powerful institutions are the most dishonest by far. I saw a recent post by the WikiLeaks Twitter account which referred to the corporate media as “the narrative business pretending to be in the news business,” which is in my opinion a perfect way to phrase it.

The real currency of the world is not gold, nor is it bureaucratic fiat, nor even raw military force; it’s narrative control.

And why would they? The same power establishment which deceived the world into destroying Iraq is obviously far too depraved to be able to justify its global hegemony with factual evidence. All they have is narrative control, and they’re starting to lose even that.

The People vs. The Paris Agreement Previous post
Journalist Masterfully Educates Houston City Council: “5G is the Most Censored Story of 2018” Next post