The Select Investigative Panel on Infant Lives held its second hearing on the Planned-Parenthood-sells-baby-parts scandal.

The hearing focused on the pricing of fetal tissue (aka baby body parts) and whether or not companies like StemExpress and Planned Parenthood are making a profit off of the practice of harvesting and selling baby parts.

The hearing revealed three key pieces of evidence that show that Big Abortion is making big bucks off of the bodies of aborted babies.

1. Abortion clinics have failed to show that they incur any expenses during baby body part transactions

Planned Parenthood has claimed that it previously only collected payment for the “reasonable costs” associated with harvesting baby body parts.

(I say previously, because the company decided to stop taking money for baby body parts after the authenticated undercover videos were released. Why they felt the need to stop something they claim is perfectly legal is beyond me.)

However, one of the exhibits entered into record during the hearing was a table that shows who is responsible for different activities during the process of harvesting and selling baby body parts. According to Rep. Marsha Blackburn who oversees the committee, the evidence reveals that Planned Parenthood simply has no costs associated with the process.

What’s interesting is that abortion clinics are being paid to allow procurement companies to take the babies’ remains and re-sell them. This saves the abortion clinics additional costs of having to dispose of the remains themselves, a point raised by ADF Allied Attorney Catherine Glenn Foster. If that’s not win-win for the abortion clinic, I don’t know what is.

Important: Billy Boy’ Father Was the Head of ‘Planned Parenthood’ and Inspired His Population Control Views

StemExpress has a history of marketing to abortion clinics and telling them that participating in the harvest of baby body parts is “financially profitable.” One of the exhibits during the hearing was an excerpt of a StemExpress brochure that shows just that. 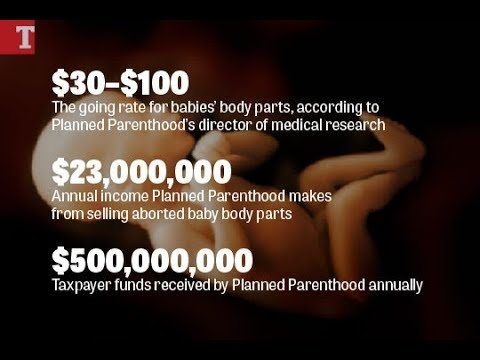 So is StemExpress using false advertising or are abortion clinics profiting?

Keep in mind, StemExpress changed its website to try to hide this fact shortly after the CEO was featured in one of the authenticated undercover videos describing the harvesting and sale of baby parts as “profitable.”


Former High Ranking Satanist: “I Performed Satanic Rituals Inside Abortion Clinics and Did 146 Abortions in Total”

Bizarrely, some members and one witness tried to claim that this StemExpress brochure was not for abortion clinics, but rather adult tissue donations. Other witnesses rebutted that claim by pointing to the fact that it was distributed at abortion trade conferences. Notably, the flyer also bears the endorsement of one vendor – Planned Parenthood Mar Monte.

3. The sale of baby body parts is a growing industry based on profit

The record also shows that as a result of their growing number of partnerships with abortion clinics, their revenue also increased exponentially.

Based on payments from researchers to procurement companies like StemExpress, and payements from StemExpress to abortion clinics, registering in the thousands of dollars per payment, we know there is a lot of money changing hands during these transactions. The profitability of this horrific industry is undenieable.

Abortion advocates and their cronies in Washington continue to pretend that this issue is about abortion access. They pretend that the undercover CMP videos are highly edited instead of what they actually are — forensically authenticated evidence.

They pretend that state investigations or outrageous indictments have any bearing on federal proceedings about whether or not a federal statute was violated when the parts of aborted babies are harvested and sold for a profit across state lines — all while ignoring state and federal findings of wrongdoing by Planned Parenthood, including the improper disposal of baby body parts.

But despite all of the pretending that took place during today’s hearing, one thing that is absolutely true is that there is significant evidence that shows further investigation into Big Abortion and its business partners like StemExpress is needed if we are going to put an end to this complete debasement of human life and ensure that justice is served.

The Infanticide Bill — Murder By A Death Cult:

By Marissa Mayer, Guest writer
GMO Salmon (Frankenfish) Coming to a Store Near You Previous post
Properly Done: Yellow Vests Flood Streets Of France For 20th Weekend (5 Months) In A Row Next post