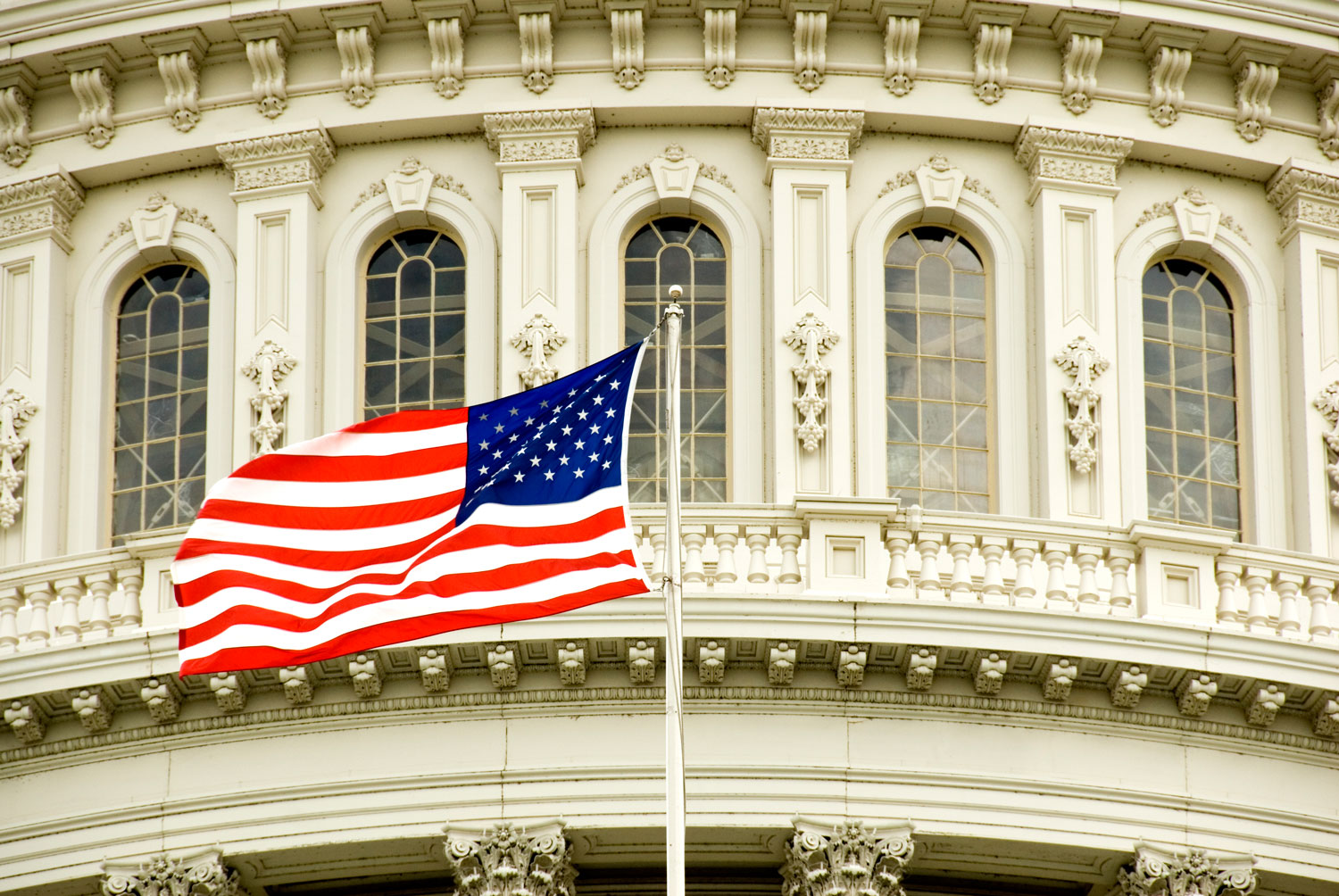 Regulation Nation: Where Independence is Illegal without a Permit

These days, you need permission from the government to do just about anything, including feeding yourself or others.

• Do you own a car? Every year, you must go down to the DMV and pay the government for permission to drive it.

• Do you own a business? You must register it and pay an annual fee to operate it.

• Do you want to renovate your home? You must pay the government to come and tell you if you’re allowed to, how you are allowed to, and to check it afterward to make sure you complied with all of their rules. 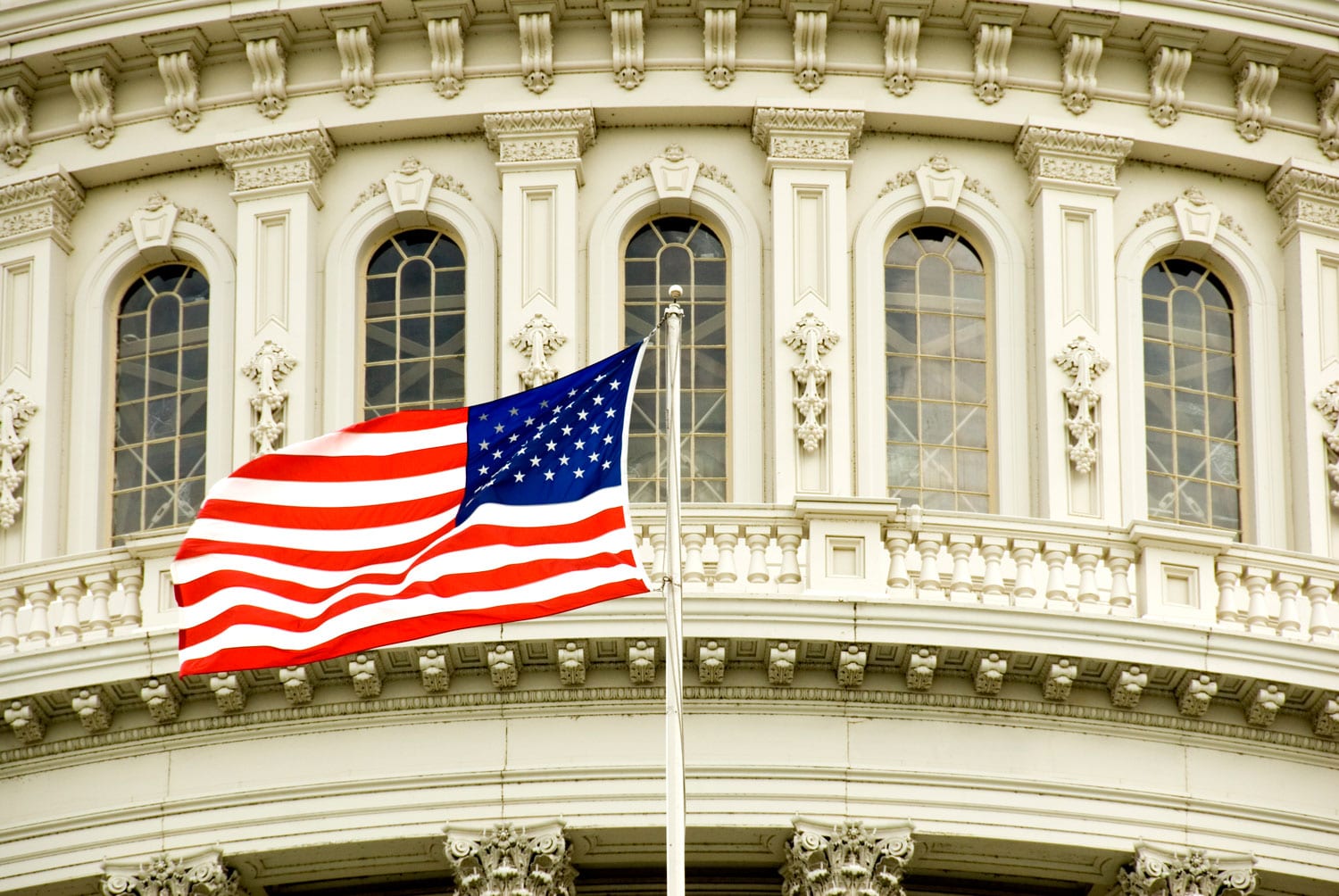 • Do you want to swap your homemade goodies for someone else’s homemade goodies? You’re supposed to get permission from the government to do it, and they’d also like you to pay them taxes on the transaction.

• Do you want to educate your children at home? In some states, you have to pay for permission to do that. You still have to pay taxes to support your local school, mind you, but you’ll need a “permit” on top of it.

• Do you want to hunt or fish to supplement your food budget? You’re supposed to go get a license to do that, too.

• Do you want to go off the grid? If you’re even allowed to, you’ll have to get a permit and an inspection.

The government is aware of their own pending obsolescence and that’s why they’re so desperate to regulate every darned thing. Oh – and the money – they make a ton of money from forcing you to purchase permission to live your life.

Every time someone pops up and does something independently, the government says, “Oh, no. All things must come from us, your benefactors.”

The government is obsolete

By mandating helplessness, the government seems to want to instill in us a belief that we can’t get by without them. Why?

People are weary of the countless laws, so numerous that we all break them every time we set foot outside our doors. The most innocuous things have come under fire as people struggle to survive and dare to do so independently:

• Artisanal soap makers who use luscious ingredients like goat’s milk, cocoa butter, and essential oils are being regulated out of business by Congress. (source)

• The FDA has declared hand-sewn menstrual cloths to be “medical devices” and subject to $4000 per year in fees, putting another cottage industry out of business. (source)

• People are charged as criminals and fined for growing food in their own yards because *gasp* people can see vegetables instead of grass. (source)

• During the terrible flooding in Louisiana earlier this year, when the government rescue operation was slow to respond, a bunch of local outdoorsmen began to save their neighbors from the rising waters. The government demanded they get permits to save their neighbors and blockaded the area with police barriers. That’s right – they used their resources to stop the rescues instead of using their resources to perform rescues. (source)

• A lady in the Philadelphia area faced a fine of $600 per day for feeding hungry kids (that usually depend on low-cost or free lunches at school) lunch during the summer. If she didn’t want to pay a fine, she had to pay a fee of $1000 and be subject to government inspections and regulations. (source)

• A woman in California faces jail time for making homemade ceviche and selling it through a Facebook group. They actually used law enforcement resources to go to her house undercover and buy her soup and arrest her. (source)

Give me a break. There is one thing at play here.

Take feeding the homeless, for example

People all over the nation have proven that ordinary citizens can make a change in the plight of homeless people. On their own dimes, good people have fed those less fortunate, given them a safe place to camp, and most of all treated them with the dignity that all human beings deserve.

Again, we’ve shown that people want to help people and that we don’t require Papa Government to come in and look after everyone.

Then, as often happens, along came the government, who said, “How dare you provide for the needs of others without our help, regulations, and permission?”

Michael Snyder wrote a fantastic article outlining the government’s war on homelessness. In his article, he related the following facts:

• A  church in Dundalk, Maryland has been fined $12,000 for allowing the homeless to sleep outside the church at night.

• In Houston, a Good Samaritan named Jay Hamberger is outraged that the help that he has been providing to the homeless for 27 years has now made him an outlaw.

• In Los Angeles, an ordinance has been passed that bans people from sleeping near homes, schools and parks in their vehicles and will only make it legal to sleep overnight in cars and RV’s in industrial or commercial districts from 9:00 pm to 6:00 am.

And that’s not all. According to Snyder’s research, the homeless have become a target all across the country.

All across the U.S. laws have been passed that specifically target the homeless. According to the National Coalition for the Homeless, the following are some of the most typical ways that the homeless are targeted…

• Making it illegal for groups to share food with homeless persons in public spaces.

• Enforcing a “quality of life” ordinance relating to public activity and hygiene.

I’m astounded by the type of mental gymnastics that makes any police officer think that it’s a fine and acceptable thing to go around and take away the meager possessions that these homeless people have left. But, you know, they’re “just doing their jobs.”

If Karma strikes back at those “job-doers” it will be a beautiful thing.

The folks you see on the street aren’t all just lazy bums and drunks who don’t want to work, although it’s a lot easier to look at it that way. Villainizing people in a desperate situation is a way to put distance between us and them.

However, according to StreetSteam.org, the real reasons that people become homeless are reasons that could happen to anyone.

And as our economic crisis continues to worse and the cost of living continues to go up, we’ll see more and more people joining the ranks of the homeless.

Feeding people is against the law in 71 cities

It is illegal (or in the process of becoming illegal) to feed hungry people in 71 cities across the United States, according to this map from the National Coalition for the Homeless. 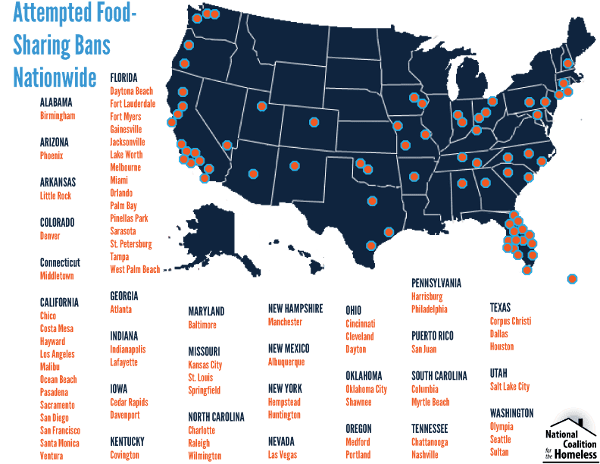 Independence must be squelched

We must get permission to feed ourselves or others, make a living without a typical job, and help our neighbors. We have to pay money to get a license to hunt or fish. We have to pay yearly extortion fees to drive our own cars. We can’t sell eggs from our chickens without permission in some states, and to do so legally, must attend a course and pay a fee to get an “egg handlers license.”

To barter, we have to conduct our business like a bunch of drug dealers. If I want to swap my home-raised chickens for someone else’s home-raised lamb, heaven forbid that the government should find out. They’d tax us, inspect us, fine us, and maybe even arrest us.

In places where you aren’t allowed to have or carry a firearm, you’re at the mercy of criminals and the wait time from calling 911. One must jump through a ridiculous number of hoops to get a concealed carry permit to be able to protect oneself instead of waiting helplessly for the cops to show up.

If only I were making this up.

If we don’t need their handouts, their jobs, their food, and their social assistance, it’s a whole lot harder for them to force us to do things against our will.

When you don’t need anything the government has to offer, you have the type of freedom upon which our nation was founded.

It was called the Declaration of Independence for a reason, but many Americans have lost that revolutionary spirit. They just stand by and accept unreasonable and unjust laws. They shrug and say that there’s nothing they can do.

And now, these unjust laws are preventing us from helping those who are struggling.

Personally, I have no intention whatsoever of following an unjust law. If I see that someone is hungry, I’ll feed them. If they’re cold, I’ll clothe them. I will grow my own food, drink from a well, and trade goods with my friends. If I can help another human being, I’ll do it, and the government be damned.