(GPA) – Yemen’s Customs Department and Consumer Protection has seized over 24,000 tons of infested, rotten, or expired food and medicines sent as “aid” to starving Yemenis since 2015. Yemen currently faces the world’s worst humanitarian disaster in the world due to four years of intense blockade.

Since 2015, Yemen’s Customs and Consumer Protection has had to either send back or seize over 24,000 tons of aid determined unfit for consumption sent from the United Nations World Food Program (WFP). Among the “aid” included 15,000 tons of supplementary food for pregnant women and medicine.

On November 6, Yemen’s Port Authority rejected and sent back a vessel from the World Food Program containing 10,000 tons of white wheat.

After inspection, authorities noticed the wheat was infested with live insects. A similar incident occurred in February when authorities inspected a WFP shipment containing 96,000 bags wheat that lacked an expiration or production date stamp.

Another particularly notable incident took place in May of 2019. At this time, Yemeni authorities found dead insects inside 8 million kilograms of wheat. Throughout June, authorities were forced to reject nearly 130,000 bags of white beans that were either wet, rotten, or infested with dead insects.

Meanwhile, the United Nations has attempted to shift blame for their unfit shipments onto the Sana’a government, led by Ansarullah aka. the “Houthis.”

On June 20, the UN announced it would begin suspending aid shipments to Yemen, citing accusations of Ansarullah “diverting food” shipments. The UN claimed it had no problem with the Saudi-backed government in Aden, which likely has no issue distributing rotten food to its citizens.

The WFP expects the suspension of aid to impact 850,000 people. 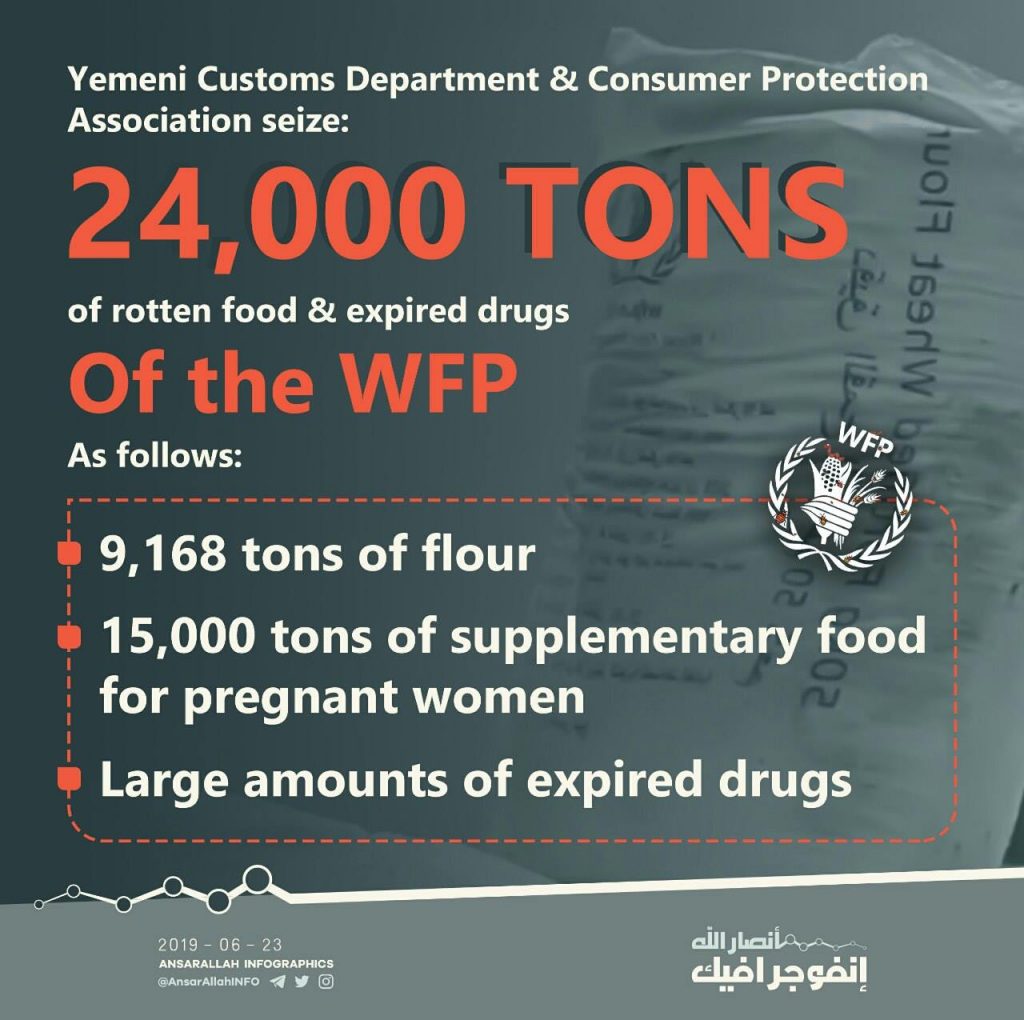 Yemen isn’t the only crisis impacted by the UN’s carelessness in regards to sending disgusting aid shipments. In 2016, the UN was caught sending expired food to Somalia intended for victims of a devastating drought.

Yemen currently faces the world’s worst manmade humanitarian disaster on the planet and the United Nations has done nothing to stop it. According to the latest report from ReliefWeb, 80% of Yemen’s population — 22 million — require urgent humanitarian aid to survive including food, water, and medical supplies.

If the United Nations is serious about helping starving Yemenis, it could start by lifting the devastating blockade which has turned Yemen into an open-air prison akin to Gaza.

The Saudi-led, US-enforced, and UN-condoned land, sea, and air blockade severely restricts all imports, exports, and the flow of movement. All aid shipments destined for Yemen are forced to dock in neighboring countries like Djibouti to await inspection from Saudi-backed authorities while food rots for weeks or months in the hot sun.

10 million Yemenis currently face famine due to the blockade. Meanwhile, pregnant women, the elderly, children, and patients with chronic diseases also bear the brunt of the blockade’s effects. According to Save the Children, over 85,000 children have died of starvation while countless others await a similar fate.

This also says nothing about the shortage of lifesaving medications for children, cancer patients, dialysis patients, diabetics, and pregnant women. At least 1.1 million pregnant women are reportedly malnourished, at risk for miscarriage and stillbirth.

The blockade is all part of the Saudi-led coalition’s strategy to use starvation and disease as a weapon of war to beat Yemenis into submission.

The 5G Agenda Could Turn Us All Into Conscious Activists Previous post
Ship Seized in Record $1.3 Billion Cocaine Bust Belongs to JPMorgan Next post