Update: This article has been labeled as “fake news” by Facebook, even though the research is backed by solid science from the Department of Physics and Astronomy, University of Turku, in Finland [.pdf archived here].

According to the study, “During the last hundred years the temperature is increased about 0.1°C because of CO2. The human contribution was about 0.01°C.”

This means that anthropogenic global warming is a scam, which is precisely why 31,487 scientists have signed a petition in which they denounce the global warming science, as junk science.

Even on NASA’s website you will find an article entitled “Carbon Dioxide Fertilization Greening Earth, Study Finds“, where it is explained how a team of  32 authors from 24 institutions in eight countries, have discovered that CO2 has had a re-greening effect on vegetation all over the world in the past decades:

“From a quarter to half of Earth’s vegetated lands has shown significant greening over the last 35 years largely due to rising levels of atmospheric carbon dioxide, according to a new study published in the journal Nature Climate Change on April 25.

“An international team of 32 authors from 24 institutions in eight countries led the effort, which involved using satellite data from NASA’s Moderate Resolution Imaging Spectrometer and the National Oceanic and Atmospheric Administration’s Advanced Very High Resolution Radiometer instruments to help determine the leaf area index, or amount of leaf cover, over the planet’s vegetated regions. The greening represents an increase in leaves on plants and trees equivalent in area to two times the continental United States.” [emphasis added] (Source; source)

In consequence, you will no longer be able to share this article on Facebook, and my page has once again reduced reach (which it already had for about a week, even without this “strike”).

This is not the first time that Facebook has been banning genuine scientific research from their platform. Please follow this link for another similar example, and please follow all of the links that I have included, which show actual climate scientists disproving the anthropogenic global warming scam, which is costing us trillions.

The climate change hoax has collapsed. A devastating series of research papers has just been published, revealing that human activity can account for no more than a .01°C rise in global temperatures, meaning that all the human activity targeted by radical climate change alarmists — combustion engines, airplane flights, diesel tractors — has virtually no measurable impact on the temperature of the planet.

Natural variations in low cloud cover, which are strongly influenced by cosmic radiation’s ability to penetrate Earth’s atmosphere due to variations in the strength of our planet’s magnetosphere, account for nearly all changes in global temperature, the researchers explain.

As this chart reveals, more cloud cover is inversely related to temperature. In other words, clouds shield the surface of the Earth from the sun, providing shade cover cooling, while a lack of clouds results in more warming: 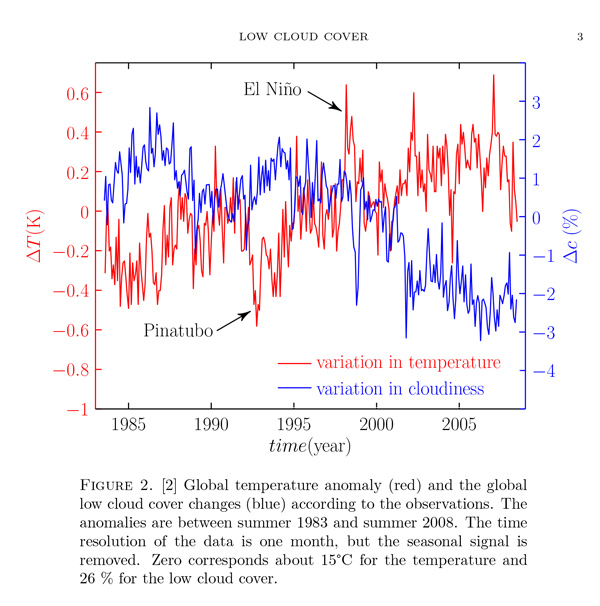 Cloud cover accounts for the real changes in global temperatures

This is further supported by researchers at Kobe University in Japan who published a nearly simultaneous paper that reveals how changes in our planet’s magnetic field govern the intensity of solar radiation that reaches the lower atmosphere, causing cloud formation that alters global temperatures.

That study, published in Nature, is called, “Intensified East Asian winter monsoon during the last geomagnetic reversal transition.” It states:

Records of suborbital-scale climate variation during the last glacial and Holocene periods can be used to elucidate the mechanisms of rapid climate changes… At least one event was associated with a decrease in the strength of the Earth’s magnetic field.

Thus, climate records from the MIS 19 interglacial can be used to elucidate the mechanisms of a variety of climate changes, including testing the effect of changes in geomagnetic dipole field strength on climate through galactic cosmic ray (GCR)-induced cloud formation…

In effect, cosmic rays which are normally deflected via the magnetosphere are, in times of weak or changing magnetic fields emanating from Earth itself, able to penetrate further into Earth’s atmosphere, causing the formation of low-level clouds which cover the land in a kind of “umbrella effect” that shades the land from the sun, allowing cooling to take place.

But a lack of clouds makes the surface hotter, as would be expected. This natural phenomenon is now documented to be the primary driver of global temperatures and climate, not human activity.

Burn all the oil you want, in other words, and it’s still just a drop in the bucket compared to the power of the sun and other cosmic influences. All the fossil fuel consumption in the world barely contributes anything to actual global temperatures, the researchers confirmed.

As they explain, the IPCC’s climate models are wildly overestimating the influence of carbon dioxide on global temperatures:

…the [IPCC] models fail to derive the influences of low cloud cover fraction on the global temperature. A too small natural component results in a too large portion for the contribution of the greenhouse gases like carbon dioxide.

That is why J. KAUPPINEN AND P. MALMI IPCC represents the climate sensitivity more than one order of magnitude larger than our sensitivity 0.24°C. Because the anthropogenic portion in the increased CO2 is less than 10%, we have practically no anthropogenic climate change. The low clouds control mainly the global temperature.

The entire “climate change” hoax is a fraud

Carbon dioxide, in other words, isn’t the “pollutant” that climate change alarmists have long claimed it to be. CO2 won’t destroy the planet and barely has any effect on global temperatures (the IPCC’s estimate of its effect is, according to Finnish researchers, about one order of magnitude too large, or ten times the actual amount).

In fact, NASA was forced to recently admit that carbon dioxide is re-greening the Earth on a massive scale by supporting the growth of rainforests, trees and grasslands. See these maps showing the increase in green plant life, thanks to rising CO2: 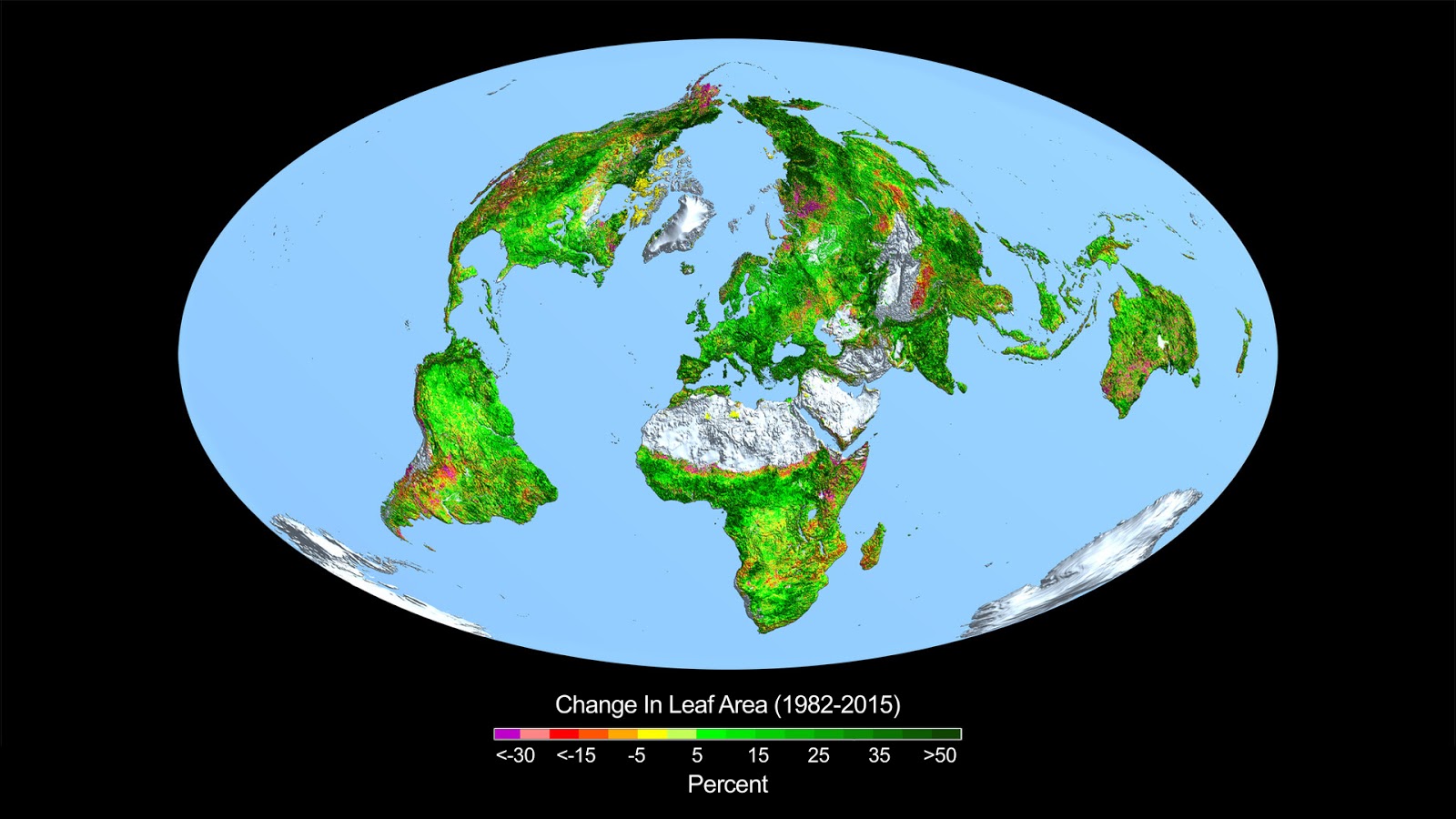 This image shows the change in leaf area across the globe from 1982-2015.
Credits: Boston University/R. Myneni

Importantly, reducing our global consumption of fossil fuels will have virtually no impact on global temperatures. The far bigger governor of climate and temperatures is the strength and configuration of Earth’s magnetosphere, which has always been in flux since the formation of the planet billions of years ago.

The weaker the magnetosphere, the more cosmic rays penetrate the atmosphere, resulting in the generation of clouds, which shield the planet’s surface from the sun. Thus, a weaker magnetosphere causes global cooling, while a stronger magnetosphere results in global warming, according to this research. This phenomenon is called the “Svensmark Effect.”

As reported by Science Daily:

This suggests that the increase in cosmic rays was accompanied by an increase in low-cloud cover, the umbrella effect of the clouds cooled the continent, and Siberian high atmospheric pressure became stronger.

Added to other phenomena during the geomagnetic reversal — evidence of an annual average temperature drop of 2-3 degrees Celsius, and an increase in annual temperature ranges from the sediment in Osaka Bay — this new discovery about winter monsoons provides further proof that the climate changes are caused by the cloud umbrella effect.

The “war on carbon” is derived from sheer stupidity, arrogance and scientific illiteracy

The extreme alarmism of climate change lunatics — best personified by Alexandria Ocasio-Cortez’ insistence that humanity will be destroyed in 12 years if we don’t stop burning fossil fuels — is all based on nothing but fearmongering media propaganda and faked science. (The IPCC and NOAA both routinely fudge temperature data to try to create a warming “trend” where none exists.)

It’s all a massive, coordinated fraud, and the mainstream media deliberately lies to the public about climate change to push anti-free market schemes that would destroy the U.S. economy while transferring literally trillions of dollars into the pockets of wealthy globalists as part of a “carbon tax” scheme.