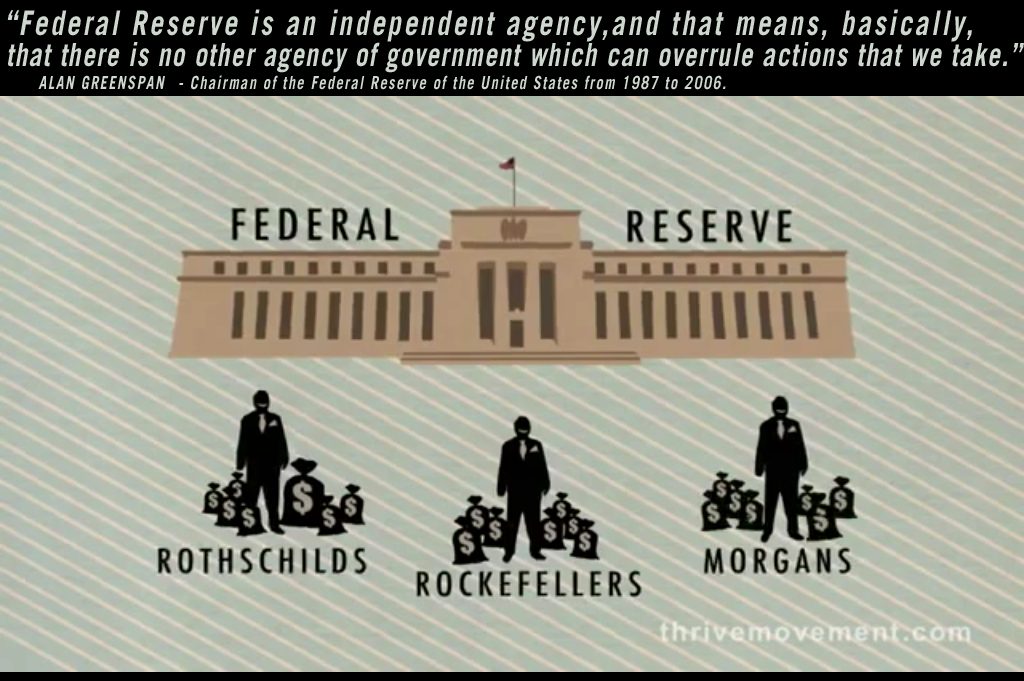 Banking Cover-up: The Federal Reserve Is Neither Federal, Nor A Reserve

“The Federal Reserve is neither truly federal, nor a full reserve. It is not owned or directly controlled by the United States government. The fact that the words ‘United States Federal Reserve System’ are printed on every U.S. bank note thus raises serious questions.”

How much do you know about the banking system and who issues the money you carry in your pocket? Considering the vital role money plays both in our individual lives and in the world, our educational system teaches us amazingly little about how money is created, how banks operate, and what causes the huge banking scandals and bankruptcies that have occurred.

After reading the information below, you will understand why this information is kept quiet and why we feel it is important to reveal these major banking and financial cover-ups. The world’s wealthiest bankers guard their secrets very closely.

The Federal Reserve: Neither Truly Federal Nor a Full Reserve 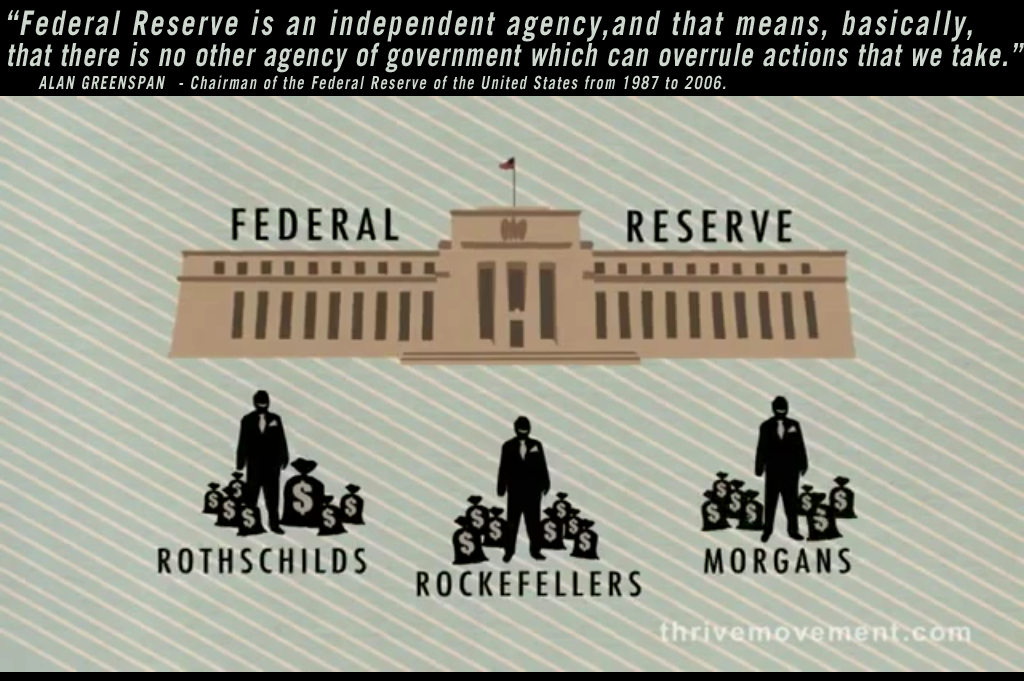 Do you know who issues the money in your wallet or purse? For readers located in the U.S., take a look at the top of any U.S. bills and you will find “Federal Reserve Note” printed along the top. In a small black circle on the left side of these notes, you will also see the words “Federal Reserve.”

Yet who owns the Federal Reserve?

You can verify this by reading the court case at this link (case 406 F.3d 532) and going to Part II, paragraph 9. This case further states that “each Federal Reserve Bank is owned by the commercial banks within its district.”

Could it be that this information is conveniently withheld to keep the public from understanding who owns the banks which issue all U.S. dollars?

Yet a study of the history and functions of the Federal Reserve reveals that powerful bankers such as J.P. Morgan have had inordinate power and control over the formation and management of the monetary policy of the United States through their power over the Fed. Congress has virtually no influence over this incredibly powerful institution.

Neither does the Fed have reserves to back all of the credit it issues. None of the money in circulation is backed by anything of real value such as gold or silver. The backing of U.S. currency by a gold standard was removed under President Nixon in 1971. In fact, the Fed, like all banks, at any one time has only 3 to 10% of all credit issued held in reserve as bank notes.

So the Federal Reserve is neither truly federal, nor a full reserve. It is not owned or directly controlled by the United States government. The fact that the words “United States Federal Reserve System” are printed on every U.S. bank note thus raises serious questions.

The foundation for the Federal Reserve system was crafted in the utmost secrecy in 1910 at the Jekyll Island resort by several powerful men with very close ties to the Rockefellers, the J.P. Morgan family, and the Rothschilds — the richest and most powerful families in the world at that time.

A version of the legislation crafted eventually passed in 1913 over the objections of many who feared that turning over control of the nation’s money supply to a consortium of private bankers would inevitably only produce more riches for the ultra rich at the expense of the general public.

Virtually everyone agrees that the Fed is highly secretive. Wikipedia lists other criticisms of the Federal Reserve in the below three paragraphs:

“Other critiques include arguments in favor of the gold standard and criticisms of an alleged lack of accountability or culture of secrecy within the Reserve. Finally, a group of conspiracy theories make various charges against the Federal Reserve, generally claiming the Federal Reserve System is actually a scheme to enrich a few wealthy bankers at the expense of the public.

“Economists of the Austrian School such as Ludwig von Mises contend that the Federal Reserve’s artificial manipulation of the money supply leads to the boom/bust business cycle that has occurred over the last century. Many economic libertarians … believe that the Federal Reserve’s manipulation of the money supply to stop ‘gold flight’ from England caused, or was instrumental in causing, the Great Depression.

“Nobel Economist Milton Friedman said he ‘prefer[s] to abolish the federal reserve system altogether.’ [13]. Ben Bernanke, [former] Chairman of the Board of Governors of Federal Reserve, stated: ‘I would like to say to Milton [Friedman] and Anna [J. Schwartz]: Regarding the Great Depression. You’re right, we did it. We’re very sorry. But thanks to you, we won’t do it again.’ [22] [23]“

The Fractional Reserve System: Creating Money Out of Thin Air

Another aspect of banking about which most people know little to nothing is the fractional reserve system. Fractional-reserve banking refers to the standard banking practice of issuing more money than the bank holds as reserves.

Banks in modern economies typically loan their customers many times the sum of the cash reserves that they hold. Did you know that for every dollar in your checking or savings account, the bank can legally loan out $10 or more?

“When the ancients began to use gold in making transactions, it became apparent that it was both unsafe and inconvenient for consumers and merchants to carry gold and have it weighed and assessed for purity every time a transaction was negotiated.

“It therefore became commonplace to deposit one’s gold with goldsmiths whose vaults or strongrooms could be used for a fee. Upon receiving a gold deposit, the goldsmith issued a receipt to the depositor. Soon goods were traded for the goldsmiths’ receipts and the receipts became the first kind of paper money.

“Then some adroit banker hit on the idea that paper money could be issued in excess of the amount of gold held. Goldsmiths [then began to issue] additional ‘receipts’ … into circulation by making interest-earning loans in the form of gold receipts. This was the beginning of the fractional reserve system of banking.”

The college text from which the above quote is taken does not question the propriety of goldsmiths creating these new “receipts” or money without any gold backing, without any authority, and indeed without any real reason to do so other than to enrich themselves. In fact, the text even praises the questionable behavior of the one who began this hidden form of corruption as “adroit.”

The unsuspecting public had no idea that goldsmiths were issuing paper receipts accepted as money which were backed by no gold deposits at all for ten times or more the amount of gold that had been entrusted to them. The goldsmiths were secretly creating money out of thin air. They thus made themselves fantastically wealthy without anyone noticing what was going on.

To better hide this deceit and divert people’s attention, the goldsmiths stopped their old practice of charging for storing gold and instead began to pay customers a small interest on their gold deposits to keep them happy. Thus it was that modern day bankers were born.

Ron Paul: “Federal Reserve Needs to be Audited and Then Ended as Soon as Possible“

Amazingly, the system has changed little today. Macroeconomics professors, college texts, and all involved with banking almost never question the ethics or morality of this fractional reserve system.

No one even questions in any meaningful way the ethics and corruption involved in creating money out of thin air. In fact, the fractional reserve system was formalized into law centuries ago and continues to be both legal and the accepted common practice around the world today.

Have you ever wondered how banks afford those massive buildings downtown if they charge only 10% or so on loans and pay 5% or less interest on deposits? If bankers were not allowed to create money out of thin air, they would be making only a few percent a year on every loan issued, far from enough to build the towering skyscrapers owned by banks in practically every major city.

But by creating credit (money) using the fractional reserve system, bankers can legally claim credit to 10 times or more the amount of any loan. Now you can understand the foundation upon which global banking empires are built.

As this system has been used for centuries by every country in the world, it clearly works to maintain a relatively stable economic order. We are not advocating a dramatic change of this system. We do, however, feel that suppressing and otherwise hiding this key information is a massive deception which does not serve the public and only serves to allow the bankers to easily become excessively powerful and corrupt.

We recommend these revealing documentaries on money and the banking cover-up:

The Ascent of Money: A Financial History of the World (PBS)

These fact-filled documentaries do an excellent job of introducing and educating viewers to key, little-known facts which impact our global economy and politics. We encourage you to have a healthy skepticism of what is presented, yet also to have an open mind to the possibility that much of what is presented is based on verifiable evidence.

Note that the Ascent of Money has four parts, each one hour in length. The first two parts are excellent in revealing the hidden history of money in our world, though the third and fourth parts on more recent history are much weaker.

You can help to inform others of what is going on by educating yourself with the above videos and spreading the word on the banking and financial cover-up. For what you can do about it, see below. Thanks for caring.

Even deeper: See a treasure trove of major media articles revealing blatant manipulations by top bankers. A top Wall Street and government insider’s essay shows just how ruthless the power brokers can be. A more thorough history of the development of banking is available here. Read a top professor’s 10-page summary of the powerful role of bankers throughout history.

Further information on this vital issue with realistic proposals for empowering change can be found on the American Monetary Institute’s website. And explore a highly decorated U.S. general’s essay revealing huge manipulations and profiteering by major banks in wartime.

For lots more, see our Banking Corruption Information Center at this link.