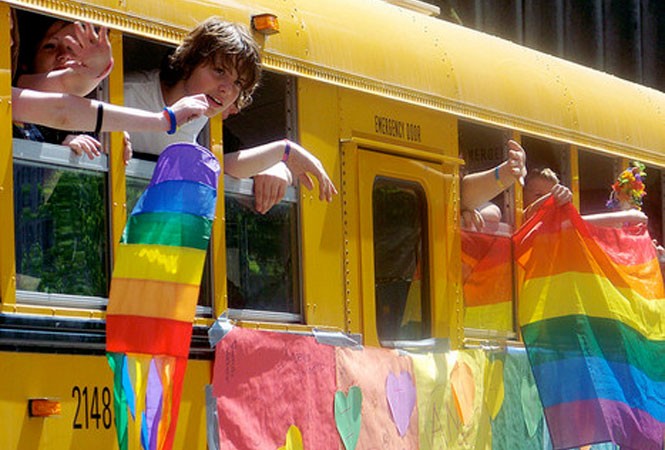 Whereas children of this age would have been innocently romping around the playground, jumping rope, playing dodgeball, and climbing across the monkey bars 50 years ago, 10-year-olds today are reportedly now being taught at public school how to engage in sodomy, use condoms, and play with sex toys.

This, according to a former public school teacher-turned-whistleblower who says that the new “education standards” in the Golden State are so beyond the point of depraved that most parents, if they really knew the truth, would be marching on these indoctrination centers with pitchforks in hand.

“And when you read the curriculum,” she says further, “it’s written almost like a college fraternity wrote this curriculum in a very crass and a juvenile way.”

When giving public interviews, Friedrichs, a conservative activist who’s been actively involved in fighting this type of indoctrination and brainwashing of innocent young children for nearly 30 years, says that she often can’t even discuss what’s going on because it’s too extreme for public airways.

“I always tell people that the scary thing is, I’ll give radio interviews and I can’t even say on the radio things that are being taught in our elementary and middle school classrooms in mixed company,” Friedrichs says.

“There’s something very wrong there.”

In addition to being taught all sorts of perverse sexual acts, these same 10-year-old children are also being given lessons in how to become transgenders and other “colors” on the LGBTQP “rainbow,” a form of brainwashing that’s actually been shown to increase the risk of exposed children developing mental illness or attempting suicide later on in their lives.

In Oregon, the parents of an eight-year-old boy are suing Nellie Muir Elementary School over a teacher whom they say indoctrinated their son with “one-on-one gender lessons,” confusing him into believing that he’s a transgender.

Something similar happened to a 6-year-old girl was taught in school that “there’s no such thing as boys and girls”. Her parents subsequently filed a complaint with the Human Rights Tribunal against the school system after their daughter started worrying she might not be female after being indoctrinated by the school.

As for the students in California who are now being systematically subjected to this type of LGBTQP insanity, parents are reportedly prohibited from opting them out of it because doing so, says the Cult of LGBTQP, would constitute “bullying.”

“It’s this anti-bullying campaign so that LGBT children don’t get bullied because they claim there’s this big problem with bullying of those children,” Friedrichs says, pointing out the irony of the Cult of LGBTQP bullying parents by disallowing them authority over their own children’s schooling.

“What the unions do is they push their agenda by saying, ‘We have to stop all this bullying, so every single child in America needs to be exposed to this anti-bullying in the form of gender spectrum and gender identity,” Friedrichs adds.

“It’s caused a lot of confusion for parents here, because parents will say, ‘Oh, I don’t need to worry, I can opt out.’ Well, you can’t opt out of all of it.”

Ex-Chief Adviser for UN Children’s Program Has Been Convicted & Jailed for Pedophilia Previous post
Cisco Wheeler Claims She Was Born Into a Illuminati Family, Subjected to Mind Control, and Used as a Child Sex Slave to Political "Elites", Including US Presidents Next post