British police in Manchester failed to stop dozens of girls being sexually abused by a network of Pakistani men despite knowing it was happening due to fears over creating “community tensions.”

In yet another grooming scandal involving predominately Pakistani men sexually abusing mainly white girls, a new report reveals that Greater Manchester Police “failed to take appropriate action more than 15 years ago, despite getting details of nearly 100 “persons of interest” who were using takeout restaurants as a base to rape and abuse children in care between the ages of 11 and 17” and despite the fact that the culprits were operating “in plain sight.”

All the victims were “young white females” aged 11-17 while all the perpetrators were “almost exclusively Asian adult males, many of whom are associated via the Asian restaurant trade,” according to the report. 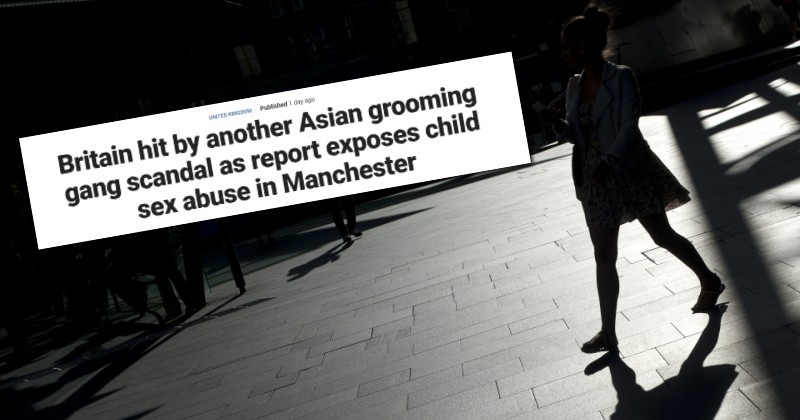 The police operation identified 57 girls who had been exploited, including one who died after being injected with heroin by her abuser, but the case was shut down in 2005 and “very few” offenders were brought to justice.

“The report includes shocking stories of how children told their carers of the abuse and pleaded to be removed from harm,” reports Fox News.

“One child is said to have begged her carers to get her away from Manchester as she was too involved with Asian men and that one “made her do things she didn’t want to.”

Another spoke of how she was taken to apartments with friends and was given vodka and cocaine and made to “do whatever they wanted us to do.” The report finds that the children were not protected by the appropriate agencies.”

One of the reasons why police failed to take adequate action was due to concerns over “sensitive community issues” because the men involved were “predominantly adult Asian men from local minority ethnic communities in the area.”

A separate unrelated case involving Kurdish people had also “created community tensions” and these factors “clearly had to be considered by the gold command group.”

“This week feminists shed more tears over a few rude headlines about Meghan Markle than they did over the sexual abuse of 57 working-class girls by Pakistani gangs in Manchester.”

Police were even ordered to try to find culprits who were white to hide the fact that the grooming gang issue was a Muslim/Pakistani problem.

“We were told to try and get other ethnicities,” said one officer.

In other words, police failed to come to the aid of child sex abuse victims despite knowing they were being trafficked because they didn’t want to be called racist or Islamophobic.

This mirrors other similar cases across the country where young white girls were abused and trafficked by Pakistani and Bangladeshi men, including in Rotherham where 1500 victims were raped and beaten but authorities ignored what was happening due to fears over “political correctness.”

Quilliam Foundation think tank statistics show that 84 per cent of convicted groomers in the UK are Muslim men.

In closing, here’s another similar case that will likely make your blood boil: British Girl Held Prisoner By Muslim Gang For 12 Years — Raped, Beaten And Forced To Have 8 Abortions

Cop Admits to Urinating on 12yo Girl, Filming It, Trying to Kidnap Her Previous post
The Sailing Stones of Egypt Next post