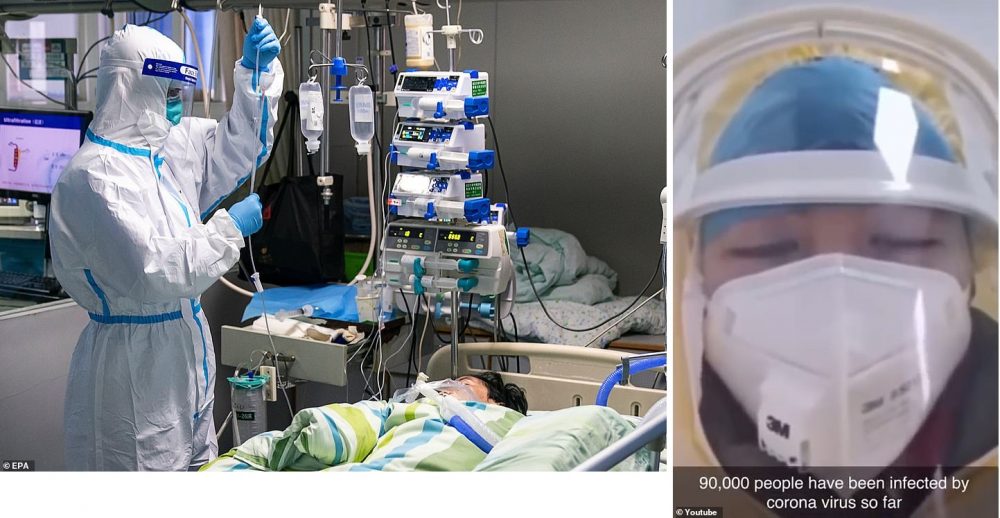 A nurse wearing a protective suit and face mask treating the sick in Wuhan has claimed that 90,000 people have already been infected by the coronavirus in China – far more than the figure of just 1,975 issued by government officials.

Her warning from the heart of the outbreak emerged as the Chinese government faced accusations of censoring criticism of its handling of the disease in order to play down the crisis.

The outbreak of the new virus originated in China, where it has infected more than 1,970 people and killed 56, and has spread worldwide. 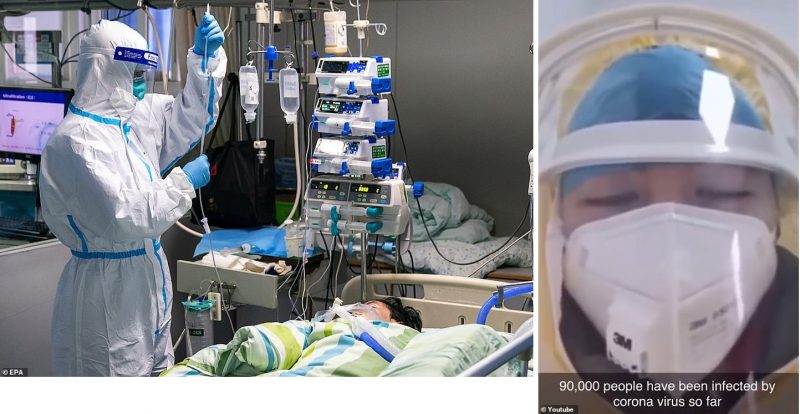 ‘I’m in the area where the coronavirus started. I’m here to tell the truth. At this moment, Hubei province, including Wuhan area, even China, 90,000 people have been infected by coronavirus.’

The country is facing a ‘grave situation’ where the coronavirus is “accelerating its spread,” Xi told the meeting, which took place on the Lunar New Year public holiday.

Despite China being initially praised for its transparency in managing the situation, critics have now claimed that officials are scrubbing the internet of videos that reveal the true situation.

However, the nurse’s report has been viewed almost two million times on YouTube. In the footage, she warns people not to go outside and to refrain from celebrating the Chinese New Year.

Virologist Who Visited Wuhan Says Coronavirus Is “Out Of Control”

‘I would like to say that everyone who is currently watching this video should not go outside. Don’t party. Do not eat out. Once a year, we celebrate Chinese New Year. If you are safe now, you will be able to meet your family again healthy next year.’

Making a desperate plea for supplies, she said:

‘We don’t care what the government says. I will tell you through social media. Everyone, please donate masks, glasses and clothes to Wuhan.

Horrifying clips have been posted online by shocked citizens only to be deleted shortly after. In one, the sick are seen sitting between drips and oxygen tanks next to three dead bodies covered in white sheets. The footage was deleted from social media channel Weibo.

Last week, in rare public dissent, a senior journalist at a Hubei provincial newspaper run by the ruling Communist Party called for an ‘immediate’ change of leadership in Wuhan on Weibo. The post was later removed.

The People’s Daily, a state-owned newspaper, posted a video of an apparently cured patient flashing the peace sign alongside four medics.

But the Global Times revealed that vital resources, including masks and goggles, were urgently needed.

Critics have also claimed that many health experts who would have been able to warn the government at an early stage of the dangers of coronavirus have been detained or had their research stopped because they were not working within the Chinese state.

The accusations of a cover-up echo the furore surrounding the SARS (severe acute respiratory syndrome) epidemic in 2002 when the government concealed the existence of the illness not just from the outside world but from its own people.

UK Researcher Predicts Over 250,000 Chinese Will Have Coronavirus In 10 Days 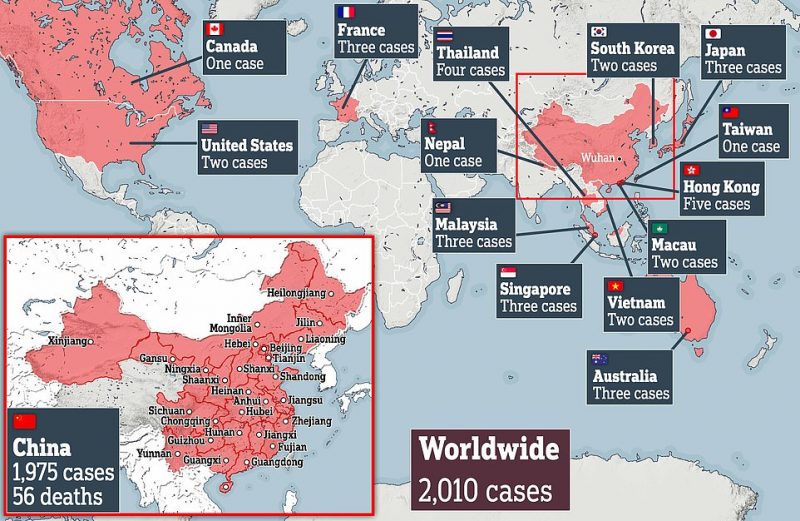 Newspapers were forbidden from reporting the disease other than occasional statements from government officials reassuring the public there was nothing to worry about.

The state put such effort into suppressing negative headlines that when an ill traveler from Guangdong arrived in Beijing, doctors had no idea what he was suffering from.

Cities across the US are on high alert as two coronavirus cases are confirmed in Chicago and Washington, 63 people are tested in 22 states and 1,000 American citizens are told to evacuate Ground Zero in Wuhan

Cities across America are on high alert amid the escalating coronavirus crisis as 63 people in 22 states are suspected to have contracted the deadly strain.

Two cases have been confirmed in the US but officials have said they expect that number to grow as dozens more people are being tested for the virus that’s sickened more than 1,400 and killed 42 in at least 12 countries.

How to Protect Yourself from 5G and EMF Radiation Previous post
The Crimes of the Allies Far Exceed Those of the Third Reich: The Fate of post-WWII Germans Deported from their Homes Next post