This is an exhibit about Eugenics, dated 1926.

According to eugenics, “some people are born to be a burden on the rest”.

You see, the eugenics movement — which steadily gained popularity for the first nearly 40 years of the 20th century and is the direct reason for forced sterilization laws implemented across America — sought to “breed out” people the elite that ultimately funded and promoted it (the Carnegie Institute and the Rockefeller Foundation, etc.) determined were genetically defective “riff raff” by way of pseudoscience parading as science.

Eugenics Exhibit (click to enlarge, take it all in for a sec, then continue reading…)

Victims of eugenics included minorities, the children of Caucasians who interbred with minorities, poor people, people with physical disabilities or who were considered “feeble-minded,” those who were deemed “delinquent,” and really, the list goes on and on (the slope got more and more slippery over time).

Eugenics only disappeared from public view when the PR disaster of World War II forced it to. Guess it looked pretty bad after the Nazis began so heavily promoting it. 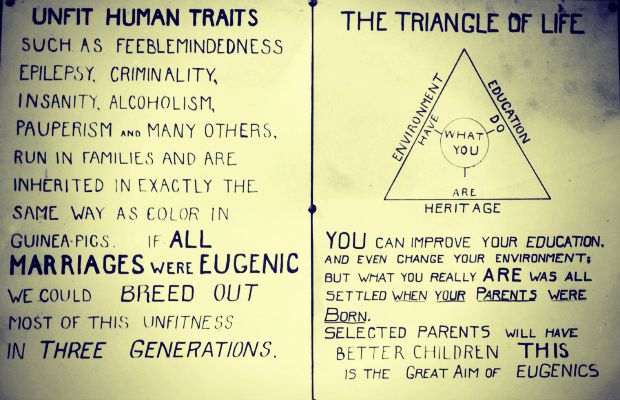 Aside from the Eugenics Record Office set up at Cold Spring Harbor on Long Island, the movement would train and send field workers around the country to take family pedigrees and compile data used to argue who had good breeding or not and who deserved the right to reproduce or not.

They set up exhibits at county fairs for “public education” on eugenic matters. They would even sponsor contests called “Better Baby” and “Fitter Family” at these fairs to judge “human stock” the way other organizations attending county fairs judged other things like prize pigs and heirloom tomatoes.

The poster shown at the start of this article is from one such eugenics educational exhibit. It featured lights that flashed at specific intervals to demonstrate different “facts” about the types of babies being born in the U.S.

And do you see what it says in the box on the far right? 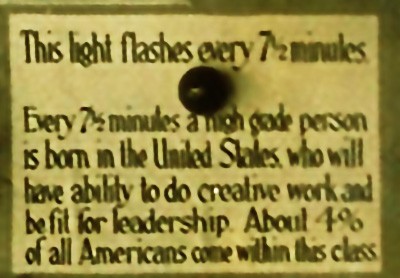 “This light flashes every 7½ minutes. Every 7½ minutes a high grade person is born in the United States who will have the ability to do creative work and be fit for leadership. About 4% of all Americans come within this class.”

“This light flashes every 7½ minutes. Every 7½ minutes a high grade person is born in the United States who will have the ability to do creative work and be fit for leadership. About 4% of all Americans come within this class.”

Just consider the gall of that statement for a moment.

These eugenicists — the elite of society who funded this movement — only considered “about 4%” of all Americans to be “high grade”.

And truly, those are the people the elite eugenicists wanted to breed more of while using twisted, fake science to justify getting rid of everyone else.

As far as they were concerned, everyone else not in that 4% should either be sterilized or, at the very least, laws should be passed where they would be forced to apply to the government for permission first before they would be allowed to procreate.

Again, eugenics didn’t end when it fell out of favor during World War II; it was simply forced to go underground. It got renamed and buried in what they hope would sound like more benign scientific areas, like genetics, human ecology, and bioethics.

The Rockefeller Foundation and other elite family foundations quietly continued their quest for population control of the general “riff raff” through different means.

We still have people like Billy Boy pushing his paralyzing polio jjabs in countries were polio is supposedly eradicated anyway and paralyzing African-only meningitis jjabs, while people like Richard Dawkins go around saying all babies who test positive for potentially having Down’s Syndrome in the womb should be automatically aborted because it would be immoral for their mothers not to do so. (That’s just to name a few).

We’re continually bathed in the idea that we’re expendable. Modern society goes like this: we’re just slightly higher animals than other animals floating around on a rock in a vast, empty nothingness with no higher meaning or purpose to any of it. Oh, and there are too many of us, too.

Pretty soon we’ll all be replaced by robots.

The system has us divided and conquered, fighting with each other all the time over one thing or another while the evil eugenicist elites have positioned themselves at the top to continue raping and killing us through various industrial- complexes (military, prison, medical, agricultural, etc.).

Meanwhile, fighting with each other over silly things like manufactured politics or skin color, they have us running for the “cure” which doesn’t cure anything while we overlook the cause.

It’s a rule-by-experts scientific dictatorship in a time when the government and rich psychopaths own, steer, and weaponize all the meaningful science to begin with. “The game is rigged,” as comedian George Carlin would say.

So why do we even keep playing it? It’s their box, their Matrix, not ours.

The reality is we have been dehumanized so much more by now than we were during the days of open eugenics in the first half of the 20th century.

The elite probably don’t even consider 4% of us “high grade” at this point.

40 Techniques of the Illuminati to Bring About the New World Order Previous post
Bayer-Monsanto’s Secret Weapon: Ex-Green Lobbyist to Tell the World Its Cancer-Linked Weedkiller Will Save the Climate Next post