To everyone’s surprise, State Secretary of Economic Affairs and Climate, Mona Keijzer recently made a connection between #5G and Crowd Control during a debate on 5G.

At the moment, Arena Amsterdam, where a 5G mast has been placed, is already working with Crowd Control by means of a data-driven assignment under the name Location Based Services.

Hereby, the data from visitors’ mobile phones are tapped, stored and analyzed. This is so to say applied for guaranteeing safety and to control the behavior of visitors.

Scanning mobile phones is therefore an essential part of Crowd Control. But in the end it can also be used as an electromagnetic weapon by releasing radiation at a higher intensity onto crowds, causing enormous itching and pain to the skin. But the application can go much further than keeping demonstrators under control, for example.

It is already possible to control the behavior and thinking of people with implanted chips in combination with 5G.

This makes Crowd Control a covered control and weapon system that can be fatal even in the worst case. And don’t think that this is science fiction because the technology for this has long been available.

With the current state of the art it is possible to completely hack a person. The only thing left to do is roll out 5G and chip people. This puts us on the threshold of an Orwellian era. Total control over man and a new form of slavery whereby man’s own thinking can be taken over.

Beamforming means being able to focus beams of radiation on specific areas. Up to now, a large area of ​​radiation has been filled in the communication between the mobile phone and the antenna. Due to the width of the bundle, this actually causes a lot of unnecessary radiation. But with new antennas, the radiation can only be limited to the area around the caller.

This is commercially more efficient and better for the environment.In addition, the MIMO system (Massive Input, Massive Output) was already used with the 4G network. With 5G, this ‘Massive’ MIMO, because the number of connections is greatly increased, is needed to process the growing data traffic.

This MIMO is currently being tested in the Netherlands, and that is also possible on the 4G network. Because the use of this technique can be rolled out separately from 5G. Due to the increase in the number of connections, all kinds of devices from the Internet of Things (IoT) can be connected. Massive MIMO makes the smart grid possible.

The large amount of simultaneous data flows cause a lot of interference (mutually interfering frequencies or electromagnetic waves) and therefore, with massive MIMO, Beamforming is also introduced, which solves the problem of interference. Only the technology of beamforming comes from the military industry, where it is referred to as ‘Active Denial system’. 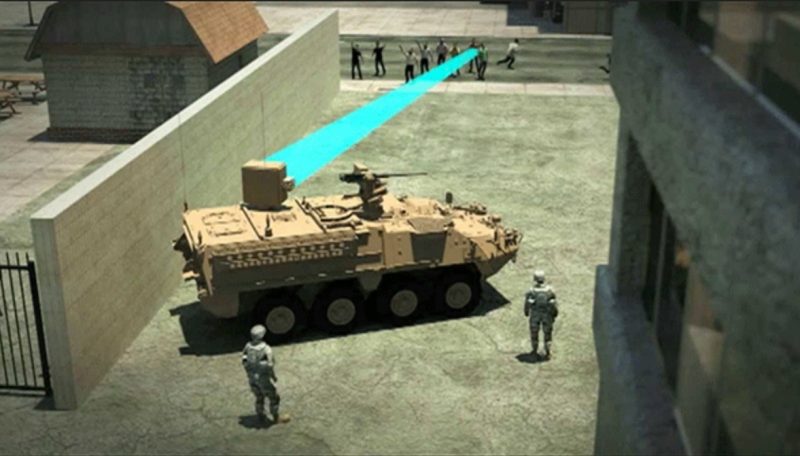 Beams of radiation are used there to control individuals or groups of people.For example, a bundle of radiation can give a group of people a pain impulse that can make them ‘freeze’ or run away.

In other words, right-wing behavioral influencing, whereby beam-forming bundles of radiation can be aimed at specific users, making use of the special antennas, the so-called phased array antennas.

As a result, radiation is better targeted, there is less interference and there is less trouble for others in the area. That seems nice, but it is not. The technique is based on military patents. The ‘active denial system’ has been developed by within the military industrial complex.

A partnership between the technology industry and the political rulers in the Pentagon. In short, population and mind control of individuals and groups has become possible with 5G. The following video, made by the telecom / defense industry, shows how this works. It should also be understood that not all transmission towers will use this ‘beamforming’. Many masts will simply continue to shine in the old-fashioned way.

But perhaps it is also important to look back, as in a 2008 report from the Ministry of Justice, which can be found under ‘Judicial reconnaissance’, specifically under volume 34 n1, 2008, including page 8:

‘Technologies that are aimed at influencing behavior and maintaining safety.Examples of this are the remote blocking of moving cars, or the transcranial magnetic stimulation of certain brain regions .”We expect that the following applications in the field of monitoring and intervention as a technical reality will be feasible in 2022 (the short-term explanation indicates that we expect this earlier, within 5 years).”

Call for the implementation of 5G to stop HERE!

Prince Andrew Linked to Another 'Predator': Alleged Pedophile and Rapist Peter Nygard Previous post
We Have Set Up a System to Sex Traffic American Children Next post