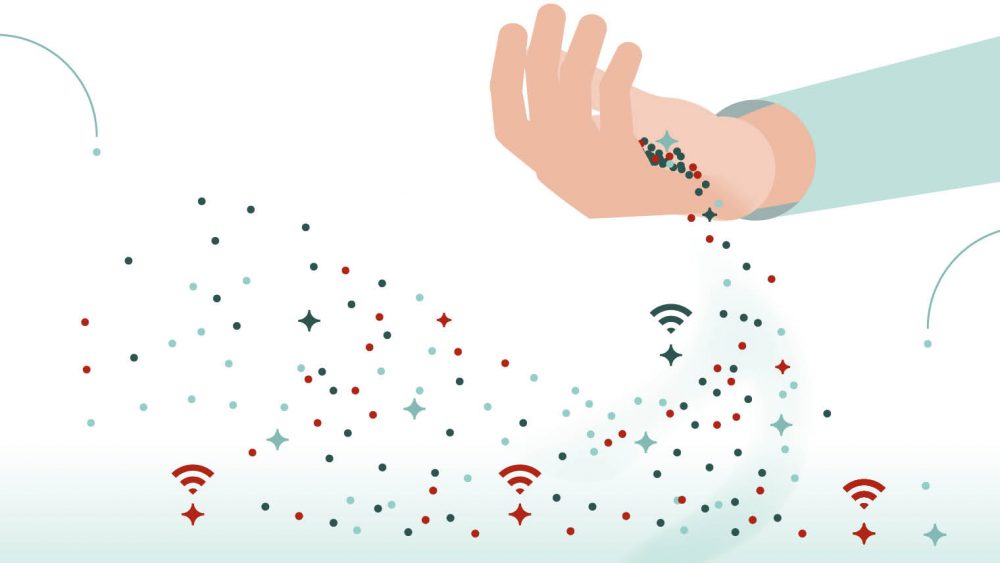 How Smart Dust Could Be Used To Monitor Human Thought

A few years ago a team of researchers from Brown University made headlines after they successfully demonstrated how a paralyzed woman who had lost the use of her arms and legs could control a robotic arm using her brainwaves.

In a video, Cathy Hutchinson imagines drinking a cup of coffee, and the robotic arm brings the cup to her lips.

The scene is amazing, but also a little disturbing. Hutchinson is connected to the robotic arm through a rod-like “pedestal” driven into her skull. At one end of the pedestal, a bundle of gold wires is attached to a tiny array of microelectrodes that is implanted in the primary motor cortex of Hutchison’s brain.

This sensor, which is about the size of a baby aspirin, records her neural activity. At the other end of the pedestal is an external cable that transmits neural data to a nearby computer, which translates the signals into code that guides the robotic arm.

This method, known as BrainGate, pretty much defined state-of-the-art brain-computer interfaces at the end of the last decade. If the idea of a rod-through-the-head computer interface makes you cringe, you are not alone.

For some time, a small team of researchers at UC Berkeley has been working on plans for a less invasive, wireless monitoring system. Earlier this month, they released a draft paper: “Neural Dust: An Ultrasonic, Low Power Solution for Chronic Brain-Machine Interfaces.”

Dongjin Seo, a graduate student in UC Berkeley’s electrical engineering and computer science department, authored the paper under the supervision of senior faculty members, including Michel Maharbiz who has famously created cyborg beetles for the US Defense Department.

Seo said the researchers’ goal is to build an implantable system that is ultra-miniature, extremely compliant, and scalable to be viable for a lifetime, for brain-machine interfaces.

“With neural dust, due to its extreme scalability, this framework can be applied for Obama’s BRAIN initiative, which necessitates large-scale, parallel, and real-time monitoring of neurons,” Seo explained.

The Berkeley researchers propose to sprinkle the brain with tiny, dust-sized, wireless sensors. This would reduce the risk of infection from wiring up scores of sensors placed throughout the brain and limit the trauma to one initial operation. 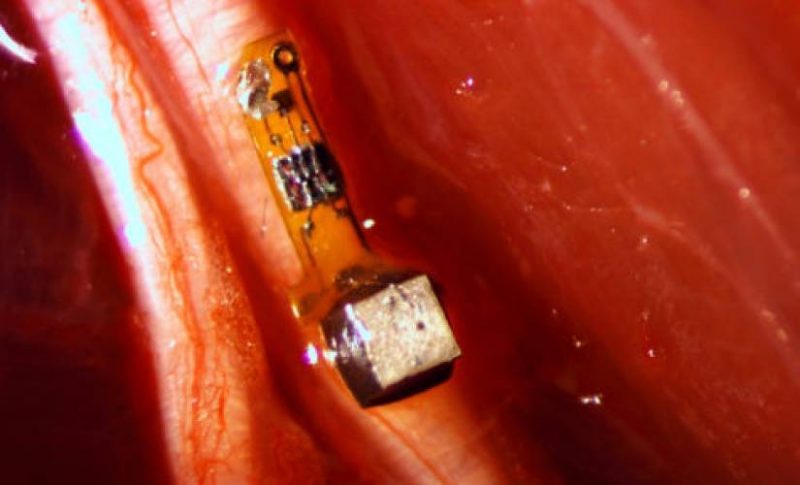 Another battery-powered transceiver outside the skull would receive data transmissions from the chip inside the skull and supply wireless power to it.

As the paper notes, this type of power transfer is already used in a variety of medical applications, including cochlear implants. Seo said the amount of power being proposed is within FDA and IEEE guidelines.

Nanochips And Smart Dust: The Dangerous New Face Of The Human Microchipping Agenda 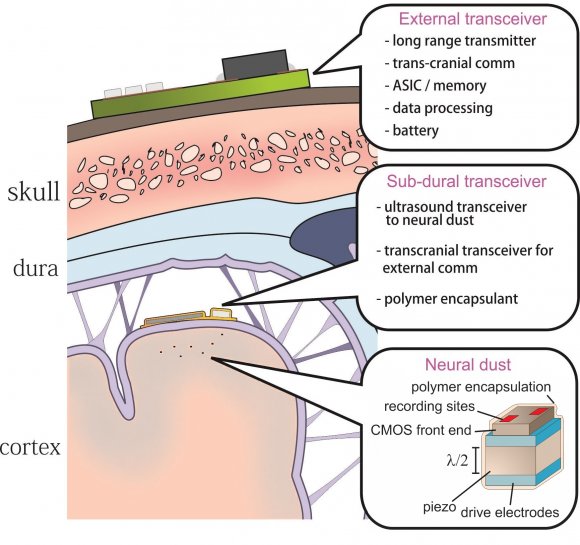 The idea of neural dust immediately sparked the imagination of futurists after the paper was published on arXiv.org on July 8.

“The brilliance of this system is that it could potentially allow scientists to see what’s going on with thousands, tens of thousands, or even hundreds of thousands of neurons inside the brain at once,” wrote Ramez Naam, a senior associate at the Foresight Institute and author of “More Than Human: Embracing the promise of biological enhancement.”

But would neural dust have practical use for the growing industry of mind-controlled computer games and brain training apps? Jon Cowan, founder of NeuroTek, is dubious. NeuroTek’s Peak Achievement Training has been used at the U.S. Olympic Training Center in Colorado Springs, as well as at other Olympic centers from China to Norway.

“[Neural dust] doesn’t have much practical promise because of the surgery it would require,” Cowan said. “I don’t think they’ll find too many people that would volunteer for it.” Cowan noted existing ways for measuring brainwaves that rely on external sensors may be crude, but they’re effective enough for today’s applications.

“We really believe this is a practical system and, more importantly, we think this is potentially a powerful framework for achieving what Obama has announced,” Seo said. Still, he pointed out that the paper is a draft.

“It’s a concept paper,” he said. “It’s a theoretical study of what we think is possible in the realm of neural recording.”

By publishing the paper on arXiv.org, an online collection of preprints of scientific work, the team is hoping to spur involvement and feedback from scientists in different fields. Lots of challenges remain to be overcome before neural dust will be ready for live testing.

Corey Feldman Needs 24hr Security As He Prepares To Release Film Exposing Hollywood Pedophiles Previous post
Arkansas Senator on CPS Kidnappings: “No Horror Movie Ever Prepared You for This” Next post