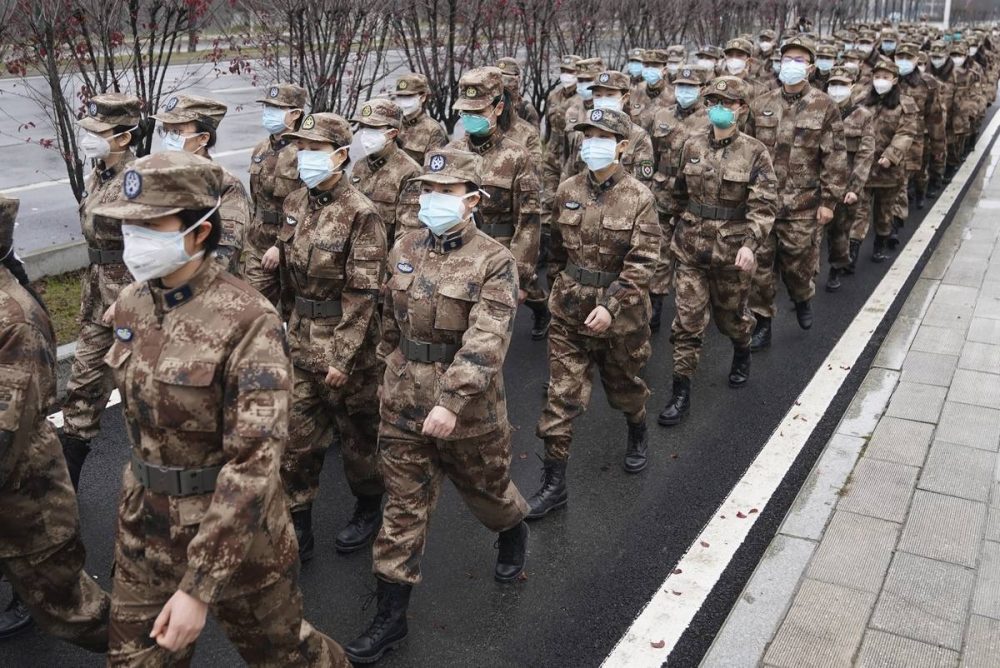 This is a big one.

How do experts tell the story of the origin of the China epidemic?

The story is always important. The medical professionals need to make it sound credible.

If it has major flaws, it’s as if a stage magician screws up a trick in full view of the audience. As he’s sawing a woman in a box in half, everyone sees her sneaking out of the back of the box. Busted. 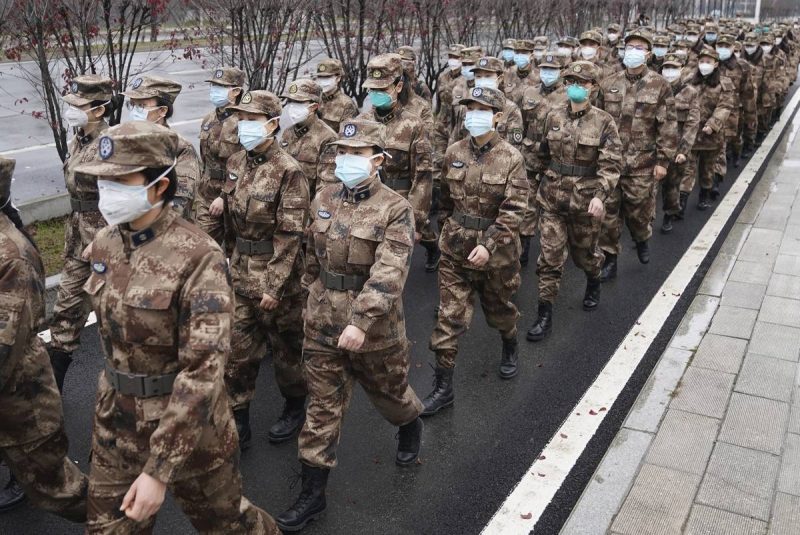 That’s what’s happening in the case of the so-called China epidemic.

According to Chinese and international public health agencies, the epidemic started in Wuhan, in a hospital, with a single patient who had pneumonia. The doctors could find no cause. Soon, researchers discovered the never-before-seen coronavirus in the patient.

Really? Let’s break this down.

The doctors couldn’t find a cause for the patient’s pneumonia. That means they didn’t locate the usual bacteria or viruses said to be responsible for pneumonia. They were puzzled.

BUT as I’ve pointed out in past articles, the city of Wuhan is famous for clouds of foul pollution. The unprecedented combination of toxic compounds in the air constitutes a clear and present danger.

Last summer, there was a large protest in the city focusing on this very issue. When lots of people take to the streets in China, you know the issue is serious — because the brutal government doesn’t take kindly to public expressions of dissatisfaction.

SO… who cares if doctors in a Wuhan hospital couldn’t find familiar bacteria or viruses in a PNEUMONIA patient? LOOK AT THE AIR POLLUTION. You want a cause for lung problems? THERE IT IS.

In other words, why would this patient be a mystery in the first place? Why would researchers look for a virus no one had ever seen before? This whole origin-story is absurd. It vibrates with ripples of FAKE.

It’s as if emergency workers bring a person into a hospital after a car accident… and the doctors are puzzled because they can’t find a bacterial explanation for the person’s injuries.

There is more. Much more.

The medical professionals had to deal with the possibility that this “new” coronavirus wasn’t new at all. Suppose it had been in the world for decades or centuries, obviously causing people no harm? If so, that would sink their ship. They couldn’t have that.

They couldn’t admit — “Oops, sorry, everyone, we made a mistake. Finding this coronavirus in people all over the world means NOTHING because, you see, it’s been around for a long, long time, and it’s never caused problems. So when we said we’ve found people who have been ‘infected’, we really mean they have this harmless virus in them.” No, no, that would never do.

Instead, the pros would have to claim the coronavirus JUST EMERGED in humans for the very first time. A FEW MONTHS AGO, it crossed over from animals (bats, snakes) to humans.

And that’s exactly what they are saying.

Here is a statement from StatNews. It’s a bit complicated, but read it over, and then I’ll comment:

“Given what’s known about the pace at which viral genomes mutate, if nCoV [the coronavirus] had been circulating in humans since significantly before the first case was reported on Dec. 8, the 24 genomes [from, presumably, 24 different samples of the virus in 24 people] would differ more.

“Applying ballpark rates of viral evolution, Rambaut [one of the “experts”] estimates that the Adam (or Eve) virus from which all others are descended first appeared no earlier than Oct. 30, 2019, and no later than Nov. 29.”

My, my. That’s quite a precise peg: the coronavirus jumped from animals to humans, for the very first time, between October 30 and November 29, 2019. The experts can assure us that it never existed in humans until that one-month period. Absurd. No one can perform such an exact analysis.

Therefore, their whole story about the human origin of the coronavirus wobbles out of the range of credibility. By miles. Whether they’re just winging it, or fabricating it, or making gross errors in bolstering their tale…there is no reason to believe anything they say about when the coronavirus surfaced in humans.

The coronavirus could have existed for a long time in humans — causing no damage or harm whatsoever.

The entire “origin story” of the “coronavirus epidemic” is riddled with exaggerations and fabrications.

Finding traces of the virus in humans and then calling these people “infected” and “carriers” and “spreaders” and “epidemic cases” is ridiculous.

Claiming the virus has spread out from Wuhan across the world is typical nonsense. The virus could have ALREADY been present in MANY different places. It didn’t spread. It was THERE.

To cite a precedent, several years ago the Zika virus was called an ominous germ that was spreading around the world, causing women to give birth to babies with smaller heads and brain damage (microcephaly).

I then reported that, according to mainstream medical sources, ANY injury to a pregnant woman could cause microcephaly. No virus necessary. And it emerged that the Zika virus had actually been discovered in…1947. It had never been known to cause harm.

In yet another fake epidemic story — this one, also a coronavirus — the SARS “epidemic” of 2003 turned out to be a dud. The official death toll, when all was said and done? 800 people out of a population of 7 billion.

And in Canada, a World Health Organization microbiologist, Frank Plummer, confessed to the press that the number of SARS patients who actually had the coronavirus in their bodies was approaching ZERO.

In other words, these patients, who had nothing more than typical flu symptoms, couldn’t have SARS, because they didn’t have the virus that was supposed to be causing SARS.

“Excuse me, waiter, I ordered dinner and you brought me a bowl of stale soggy cereal.”

“No, sir. You must be mistaken. Can’t you see the dinner on the table in front of you? We’re the experts. Leave the facts to us.”

Some people, reading what I’ve laid out in this article, will say, “But what about all the people who are sick in this epidemic?” Take a step back. A so-called confirmed case of the coronavirus doesn’t necessarily refer to a person who is sick.

If “tests show” a person “has the virus,” he is counted as “a case.” He may have no symptoms at all. Or he may have very mild symptoms. Most so-called cases ARE mild — and, as I’ve explained in other articles, the diagnostic tests for the coronavirus do not prove a patient’s symptoms are CAUSED by the virus.

The causes can easily come from other sources. This fact applies to anyone with any degree of illness who is called “a case of the epidemic.”

Finally, keep in mind that people all over the planet have the symptoms that are now being labeled, “China epidemic”: ordinary flu symptoms — fever, weakness, cough, headache, and lung problems. These symptoms can and do come about from a whole catalog of various reasons, none of which need “the story of the coronavirus.”

It’s as easy as pie to claim, without evidence, that someone who has these symptoms, and “tests positive for the virus,” is a “confirmed epidemic case.”

This is exactly how some of the fake epidemics ARE synthetically put together and fabricated. Form a hypothetical “cluster” of people in different locales who all have typical flu-like symptoms.

Claim they are all suffering from the direct effects of a single virus. Deploy diagnostic tests to test for the presence of the virus that — if the tests work at all — merely establish that the virus is in some of these people’s bodies.

The tests say NOTHING about whether the virus is causing harm. But gloss over that vital fact. Skip ahead and say: WE HAVE A SPREADING GLOBAL EPIDEMIC ON OUR HANDS. QUARANTINES ARE NECESSARY. WHEN WE DELIVER A VACCINE, EVERYONE MUST TAKE IT.

By Jon Rappoport, author of THE MATRIX REVEALED and a candidate for a US Congressional seat in the 29th District of California. Nominated for a Pulitzer Prize, he has worked as an investigative reporter for 30 years.