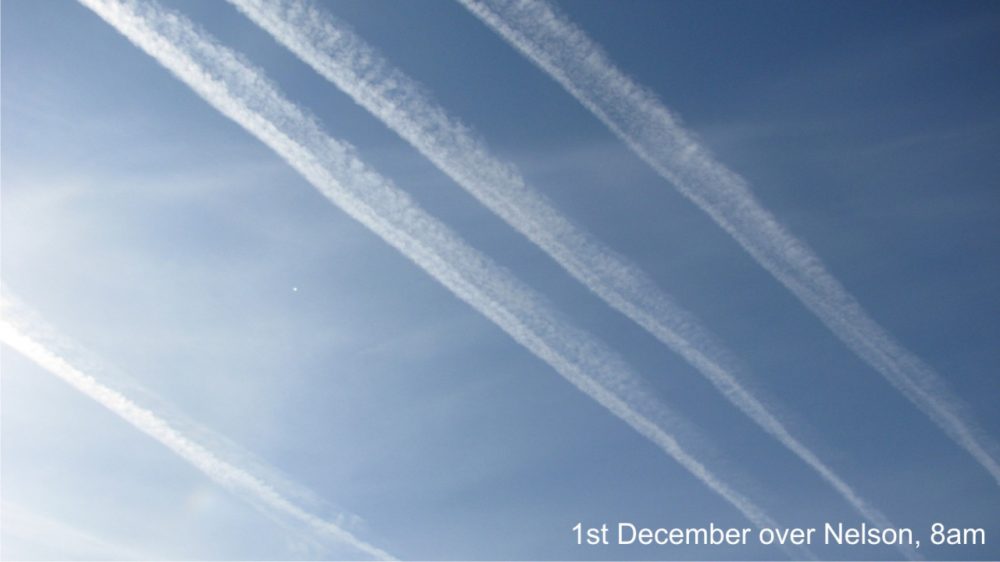 Among a recently-released assortment of declassified reports of sightings of Unidentified Flying Objects (UFOs) from New Zealand, dating from 1952-2009, were letters written in 1999 and 2000 by a concerned citizen, who predicted that an outbreak of illnesses would occur after an “aircraft contrail,” otherwise known as a ‘chemtrail’, was seen over a populated area.

Chemtrails, which are also commonly referred to as aerosols, differ from aircraft vapour trails in that they often linger in the sky for hours and can be seen in grid-like patterns, in parallel lines (see above) or forming ‘X’s in the sky. 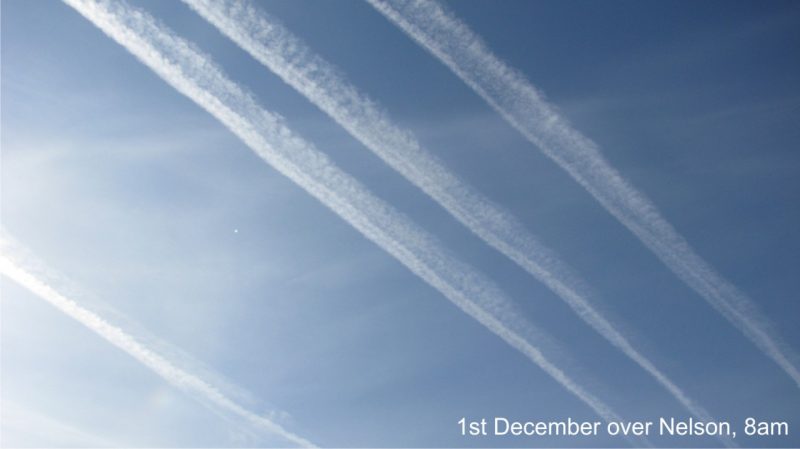 While seeing a chemtrail does not constitute proof that the illnesses were caused by it, it is worth examining the issue, given all the evidence which shows that chemtrails are making people sick, and in light of what is known about their composition.

Evidence collected for over a decade reveals that chemtrails are used for at least seven functions, including weather control and military applications, and are comprised of a wide variety of harmful ingredients.

They commonly include aluminium and barium, which are toxic to both humans and to the environment.

They may include radioactive thorium, desiccated red blood cells, dangerous pathogens, including Mycoplasma Fermentens Incognitus, plus mold spores, ethylene dibromide, and self-replicating nanotubes that cause Morgellon’s disease, which according to researcher Clifford Carnicom’s findings, now contaminate virtually everyone.

The declassified reports, which are online under the heading: Original Files: NZ’s UFO Sightings, were posted at a major New Zealand news site, Stuff.co.nz on December the 22nd, 2010, and were released to the public by the New Zealand Defence Force under the Official Information Act.

Buried among the total of 2,101 declassified documents, are letters, news clippings, and pages from magazine articles, which reveal that a private individual, whose name has been removed from the correspondence for privacy reasons, repeatedly tried to raise the alarm about the dangers of chemtrails in 1999 and early-2000.

It appears that initially the correspondent, who will be referred to as ‘Mr Gibson,’ wrote to Warren Kyd, the member of the New Zealand parliament for Hunua.

In his letter, which was dated May the 25th, 1999, he wrote that the trail he had seen was sprayed in a huge arc over Auckland and while one agency had advised him only a military aircraft could engage in that kind of activity, Air Traffic Control said it had come from a passenger plane en route to Fiji.

This is not unlikely, as passenger planes have been seen spraying chemtrails in New Zealand, and elsewhere in the world.

Mr Gibson also referred the MP to an article from the April, 1999 edition of Nexus magazine.

This article, by Canadian journalist William Thomas, titled Contrails’: Poison From The Sky, (and since renamed Chemtrails’: Poison From The Sky on the Nexus website), mentioned that in areas where these trails had been seen lingering, an emergency room had become ‘inundated with flu-like cases,’ and doctors and nurses were complaining of ‘being extremely busy with respiratory diagnoses.’

‘In England, after lingering contrails and cobweb-like fallout were reported over London and Birmingham, the BBC reported on January 14, 1999 that more than 8,000 people – mostly elderly-died from pneumonia and other respiratory complications in the last week of December and the first two weeks of January 1999.’

In light of reports like these, Mr Gibson advised in his letter:

‘If this plane was releasing something into our atmosphere and it causes like these magazines, [sic] suggests, a vast many people in Auckland will suffer from a Flu like sickness.’

A newspaper article, which is in Book 1 on page 37 in the files, and published ten days after the chemtrail was spotted over Auckland, revealed that a ‘sudden surge’ in ailments had occurred.

‘The hospital emergency department has been very busy in the past few days with patients suffering respiratory-related disorders, including pneumonia and asthmas,’ reported the NZ Herald on June the 3rd, 1999. (See below).

In addition, a subsequent article in the NZ Herald, dated July the 6th, 1999 and titled: ‘Death Rate Soars In Flu ‘Plague,” noted that about 100 people died at Auckland’s Middlemore Hospital in June ‘mainly from respiratory illnesses.’

In spite of Mr Gibson’s prediction appearing to have been correct and supported by overseas reports, the government brushed his concerns aside.

‘Inquiries have been made and Mr Kyd has been assured that there is no cause for you to be alarmed,’ Kyd’s Executive Secretary, Faith Sarten advised in a letter dated June the 21st, 1999.

Not satisfied with the response, Mr Gibson went to see Mr Kyd and on his advice subsequently wrote to the New Zealand Minister of Defence, the Hon. Mark Burton on February, the 9th, 2000.

A reply from Hon. Burton can not be found in the file, merely an acknowledgement of receipt of Mr Gibson’s correspondence.

More than a decade later and the New Zealand Government, which has by now received a multitude of letters, e-mails and phone calls from concerned citizens, is still not responding to their concerns regarding what evidence shows is occurring on a far larger scale.

For example, when I e-mailed 112 of the 122 members of Parliament on September the 10th, 2010 for a Chemtrail Mass Action, and asked them to help to stop this poisoning of our atmosphere from continuing, the most considered of a handful of replies received was that from the Executive Assistant to Catherine Delahunty, the toxics spokesperson for the NZ Green Party.

It stated: “I can see your great concern about ‘chemtrails.’ However, the Greens have to prioritise their toxics work to known chemicals (and even then, are limited in what we can focus on).”

Below: The letter ‘Mr Gibson’ wrote to the MP for Hunua, Mr Warren Kyd, which is in Book 1 of the declassified files, on page 35, followed by the reply at page 36. 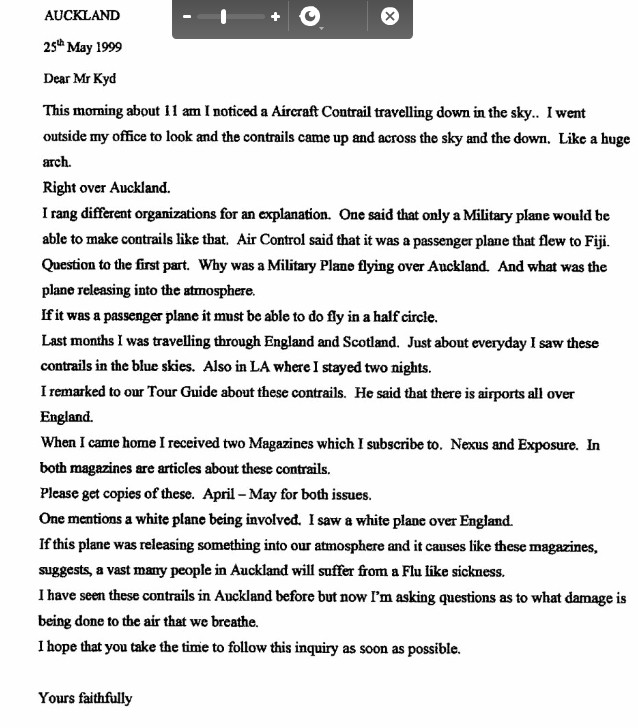 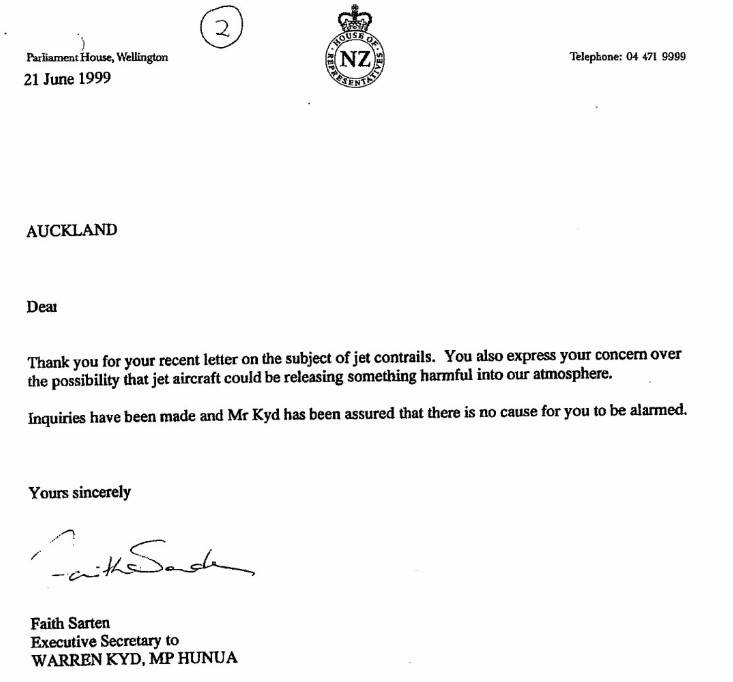 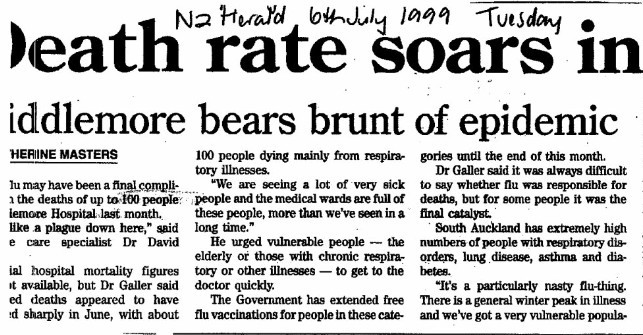 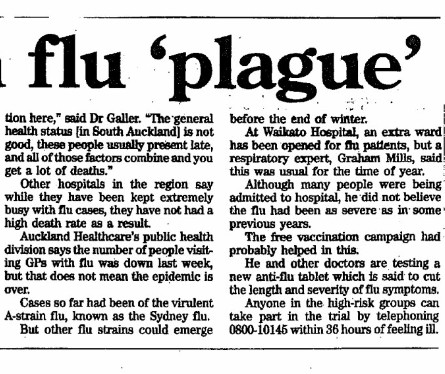 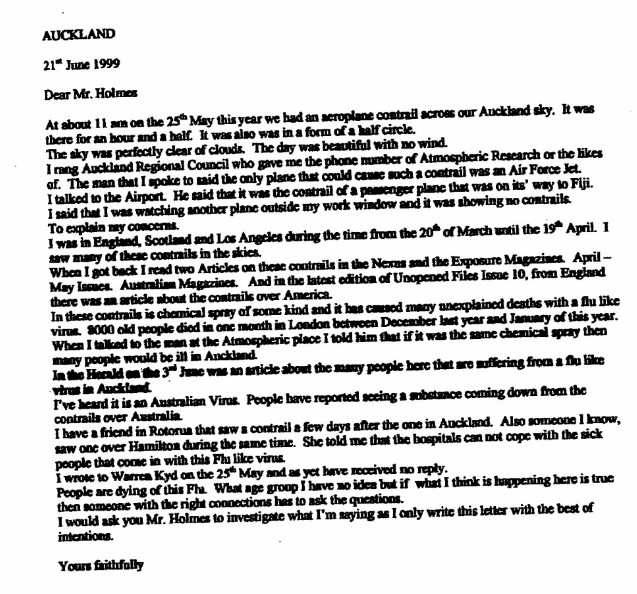 Below: An article from the NZ Herald, on December 6, 1999, that was in Book 1 on page 44 and numbered 10. It appears to be the last entry related to this matter. 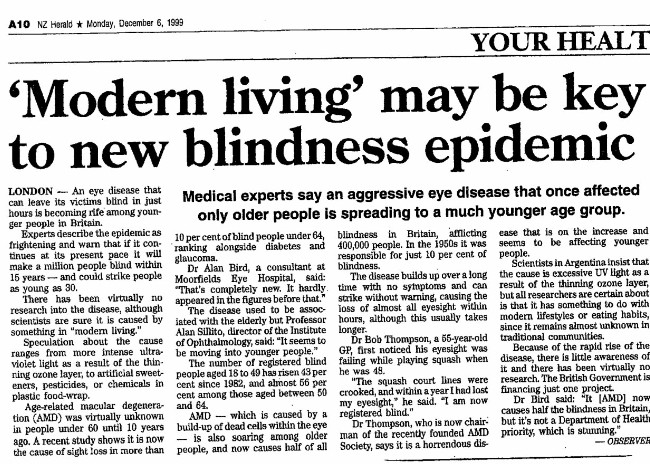 Thank-you to Ben Tomlin for advising us about these reports.