“Martial Law” Being Seen In U.S. and Europe Over COVID-19 Is The Bigger Threat

Meanwhile, other states have already taken shocking martial law measures without an official declaration, showing our potential unconstitutional future under fears of the coronavirus that likely won’t go away after the pandemic has subsided.

All over the U.S. there seems be this new trend — military and police now acting as if we are under martial law without a formal declaration of such. 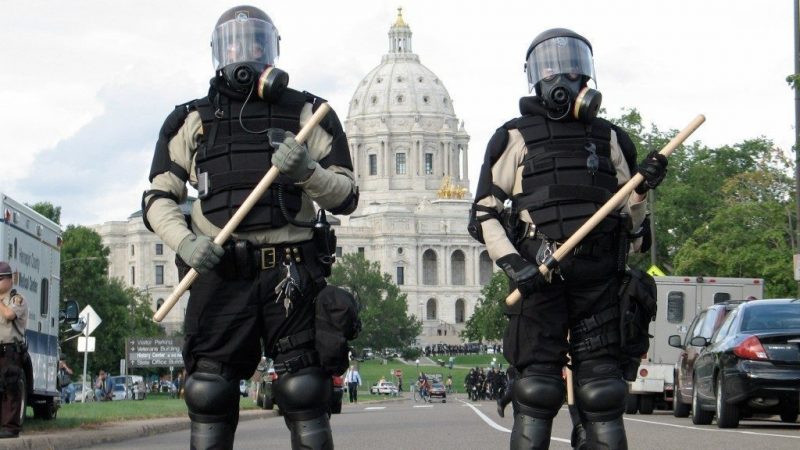 Yet, here we have NYC’s governor Cuomo begging Trump to essentially declare martial law by utilizing the military for the COVID-19 pandemic and federalize shutdowns.

“Slowing the spread of coronavirus is a function of testing and reducing the density of public gatherings.

“So first, Mr. President, you must stop the Food and Drug Administration and Centers for Disease Control and Prevention from overregulating the testing process, and authorize states to certify a wider array of testing labs and methods,” Cuomo writes.

Cuomo goes on to express that Trump should utilize the Army Corps of Engineers to transform existing facilities into temporary medical centers.

At this point, our best hope is to utilize the Army Corps of Engineers to leverage its expertise, equipment and people power to retrofit and equip existing facilities — like military bases or college dormitories — to serve as temporary medical centers.

Then we can designate existing hospital beds for the acutely ill.

To sum up what Trump can do to defend against the spread of the coronavirus Cuomo writes,

While building hospital beds in existing facilities and using the military to do so isn’t a bad idea, forced quarantines would be expanding the police state.

NYC hasn’t yet gone into “martial law mode,” but other states have basically enacted it in the form of the National Guard being deployed in heavily infected areas.

According to reports, the National Guard has been deployed so far to six states with many more expected to follow.

Beyond that, there are reports that Kentucky has a patient who refused to self isolate.

As a result, the state took things into their own hands by suspending his rights and police are now guarding him armed 24/7 at his house.

If that’s not enough, there was a video posted online of New Orleans’ police in several cop cars demanding citizens leave the streets and disperse immediately.

Then there is the curfew in New Jersey for residents and forced closure of restaurants and certain stores in other states like — California, Ohio, Illinois, Massachusetts and Washington, with more following suit.

“Effective tonight, all other non-essential retail, recreational, and entertainment businesses MUST CLOSE after 8:00 PM,” said Murphy.

“All non-essential and non-emergency travel in New Jersey is strongly discouraged between the hours of 8:00 PM and 5:00 AM This will remain in effect for the foreseeable future. We want everyone to be home –- and not out,” he added.

The UK and Italy have declared a nationwide lockdown; in other words, imposing martial law on its citizens, as well as France which followed suit, deploying 100,000 police to enforce a national quarantine in the country.

As this pandemic continues to spread we can expect more quarantines and police state actions across the world in other countries.

Back in the U.S. gun sales are skyrocketing in several states as fear of uncertainty from the virus and stock market collapse takes over American citizens seeking protection in the form of arming themselves, as LA Times reported.

Yes, everywhere you look the police state is increasing all in the name of the coronavirus, arguably one of the world’s most infectious diseases in history.

Still, these measures being put into place now will likely remain long after the pandemic has stopped and the virus has run its course. That’s the everlasting effect that COVID-19 will have on our society.

The coronavirus is now classified as a pandemic by the World Health Organization, and it may very well be a legitimate health concern for all of us around the world. But it’s the government’s response that should worry us all more in the long run.