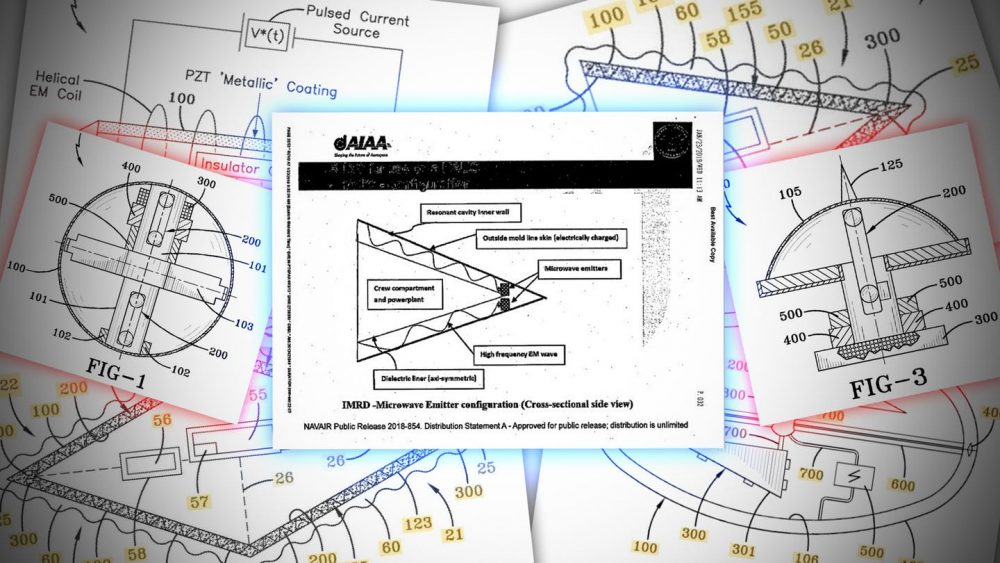 It wasn’t long ago when government agencies and scientists would simply reject even talking about inventions that defy our known laws of physics, but things are changing because science is progressing, and if there’s one thing that’s constant, it’s change.

Change is even constant in physics – a great example I like to use is of the prominent physicist Lord Kelvin, who stated in the year 1900, “There is nothing new to be discovered in physics now. All that remains is a more and more precise measurement.”

It wasn’t long after this statement when Einstein published his paper on special relativity. Einstein’s theories challenged the accepted framework of knowledge at the time and forced the scientific community to open up to an alternate view of reality. 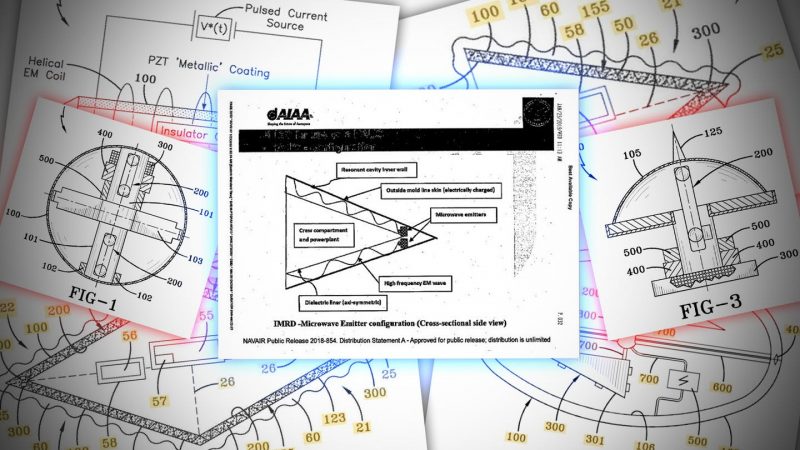 A paper titled “Outside The Box” Space & Terrestrial Transportation & Energy Technologies For The 21st Century written by Professor Theodore Loder of the University of New Hampshire reviews the development of anti-gravity research in the United States and emphasizes how “research activity seemed to disappear by the mid-1950s.”

It then looks into recently reported scientific findings and witness testimonies “that show us that this research and technology is alive and well and very advanced. The revelations of findings in this area will alter dramatically our 20th-century view of physics and technology and must be considered in planning for both energy and transportation needs in the 21st century.”

As far back as 2005, patent 6,960,975 was granted on 1 November to Boris Volfson of Huntington, Indiana. It describes a space vehicle propelled by a superconducting shield, which alters the curvature of space-time outside the craft in a way that counteracts gravity. The device builds on a claim by the Russian physicist Eugene Podkletnov that superconductors can shield the effects of gravity.

A patent filed by the United States Navy in 2016 describes a design for a craft as follows:

Shortly after the patent for the hybrid craft was approved in 2018, the inventor, Salvatore Cezar Pais presented another related paper, “Room Temperature Superconducting System for Use on a Hybrid Aerospace Undersea Craft” at the 2019 American Institute of Aeronautics and Astronautics SciTech Forum in San Diego this past January.

In the paper, Pais writes that “the achievement of room temperature superconductivity (RTSC) represents a highly disruptive technology, capable of a total paradigm change in Science and Technology,” and adds that its “military and commercial value is considerable.” 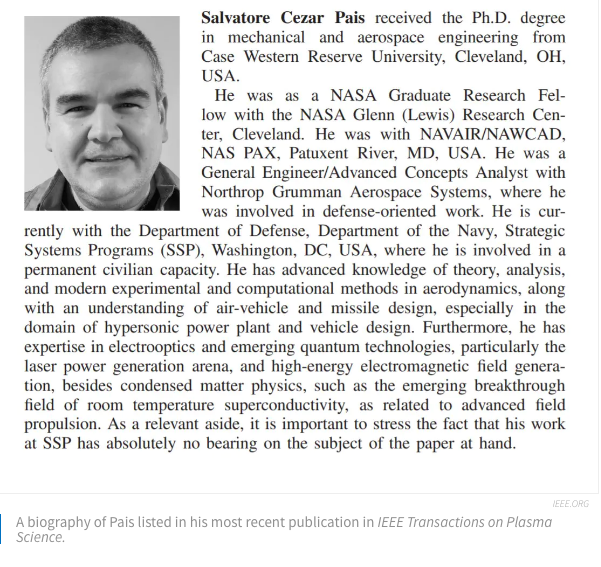 The capabilities described in the paper should certainly sound familiar to anyone who’s been following the Navy UFO stories over the last several years:

It is possible to envision hybrid aerospace-undersea craft (HAUC), which can function as a submersible craft capable of extreme underwater speeds (lack of water-skin friction) and enhanced aerial/ underwater stealth capabilities (non-linear scattering of RF and sonar signals). This hybrid craft would move with great ease through the air/ space/ water mediums, by being enclosed in a Vacuum/ plasma bubble/ sheath, due to the coupled effects of EM field-induced air/water particles repulsion and Vacuum energy polarization. (source)

These types of technologies, or potential technologies, seem to be bringing up what’s known as warp drive, or the Alcubierre Drive. The concept involves basically placing a craft within a space that is moving faster than the speed of light.

Therefore, the craft itself does not have to travel at the speed of light from its own type of propulsion system. It’s easier to understand if you think in terms of a flat escalator in an airport.

The escalator moves faster than you are walking. In this case, the space around the ship would be moving faster than the ship could fly, keeping all the matter of the ship intact. Therefore, we can move faster than light in a massless cloud of space-time.

So, rather than exceed the speed of light alone in a craft, a spacecraft would leap long distances by contracting space in front of it and expanding space behind it. This would result in travel faster than light. (source)

Physicist Miguel Alcubierre was the first (that we know of) to identify this possibility. He described it as remaining still on a flat piece of space-time inside a warp bubble that was made to move at “superluminal” (faster than light) velocity.

We must not forget that space-time can be warped and distorted, it can be moved. But what about moving sections of space-time that are created by expanding space-time behind the ship, and by contracting space-time in front of the ship?

Here’s another great paper on faster than light technology regarding altering the quantum vacuum by legendary physicist Dr. Eric Davis.

The key is developing technology that can alter-space time, but also detecting that space time, or as some like to call it “aether” or “dark matter” in some cases, so it can be engineered.

A similar concept was also recently illustrated by Mathematician James Hill and Barry Cox at the University of Adelaide. They published a paper in the journal proceedings of the Royal Society A: Mathematical and Physical Sciences (source).

“By creating a ‘warp bubble’ that expands space on one side of a spaceship and contracts it on the other, the spaceship will be pushed away from the Earth and pulled towards a distant star by space-time itself.” – Dr. Alcubierre (source)

But do these technologies actually exist?

The defense patent applications are quite intriguing, and it means that the Navy is actually taking the concept quite seriously, but is there any evidence at all of their existence?

That depends on what you consider to be evidence.

We have statements from previously retired Directors of Lockheed Martin Aerospace programs (including the most recently retired), like Steve Justice. So, what did Mr. Justice have to say? Well, a lot of things.

“In some cases, according to incident reports and interviews with military personnel, these vehicles descended from altitudes higher than 60,000 feet at supersonic speeds, only to suddenly stop and hover as low as 50 feet above the ocean.” – Christopher Mellon, Deputy Assistant Defense Secretary for Intelligence from 1997 to 2002 (source)

Justice has said that he has had “glimpses” of how this type of technology works, and that his current team needs to “harvest” these technologies from the Science Division to realize their capabilities.

Justice and his team have admitted to having access to materials from these UFOs, wherever they are from and whoever is making them.

Over the last three months, To The Stars Academy has collected seven pieces of material, from multiple sources, to study for The ADAM Research Project. Each sample represents different elements of potential Unidentified Aerial Phenomena and how they operate.

According to the accompanying provenance documentation, there are two classes of samples: material that was released as the UAP was hovering and material that makes up parts of the structure or systems.

“The structure and composition of these materials are not from any known existing military or commercial application. They’ve been collected from sources with varying levels of chain-of-custody documentation, so we are focusing on verifiable facts and working to develop independent scientific proof of the materials’ properties and attributes.

“In some cases, the manufacturing technology required to fabricate the material is only now becoming available, but the material has been in documented possession since the mid-1990’s. We currently have multiple material samples being analyzed by contracted laboratories and have plans to extend the scope of this study.

“If the claims associated with these assets can be validated and substantiated, then we can initiate work to transition them from being a technology to commercial and military capabilities.” (source)

On multiple occasions Justice has spoken of technologies that can alter the space-time metric. The mainstream has picked up on this multiple times, and here’s an example from The New York Times.

Again, it’s unclear because there just isn’t any solid proof, although I have no doubt that these technologies exist within the black budget world. After all, the “Invention Secrecy Act” written up in 1951 states that patent applications on new inventions can be subject to secrecy orders. These orders can restrict their publication if government agencies believe that their disclosure would be harmful to national security. (source), (source)

These days, national security seems to be used to protect elitist and corporate interests.

That being said, it seems that they do exist if we consider the technological capabilities that have been observed in thousands of cases of UFO sightings and incidents.