Microsoft is the company that funds Mark of the Beast digital identification company ID2020, and now they are promoting New Age witch Marina Abramovic who is best known for the satanic practice of spirit cooking. Is this really someone you would want to enter into holographic mixed reality with?

I suppose you can get away with just about anything if you call yourself a ‘performance artist’ instead of what you actually are, in this case we are talking about a High Priestess of modern-day Satanism, Marina Abramovic.

She is a wicked woman whose ‘performance art‘ usually revolves around snakes, pig’s blood, images of Baphomet, [pebtagrams] and all the rest of that garbage. But nothing to see her, people, Marina is just an ‘edgy performance artist’, that’s all. Yeah, right.

“And he caused his children to pass through the fire in the valley of the son of Hinnom: also he observed times, and used enchantments, and used witchcraft, and dealt with a familiar spirit, and with wizards: he wrought much evil in the sight of the LORD, to provoke him to anger.” 2 Chronicles 33:6 (KJB)

Take a look at an article published by the UCLA Center for European and Russian Studies back in 2018, where they calmly and rationally discussed the rise importance of witchcraft in Hollywood. It’s not simply enlightening, it’s a stunning eye-opener, and of course we see Marina Abramovic featured prominently in it.

“We seem to be living in bewitched times. Witches are everywhere, or rather: victims of alleged witch hunts pop up all over the place, preferable on Twitter or other social media outlets. Pop-stars perform as witches, like Katy Perry in her performance at the 2014 Grammy awards, where she appeared in a cowl before a crystal ball, while later dancing with broomsticks as poles.

“Beyoncé’s visual album “Lemonade” (2016) made several explicit references to black witchcraft rituals. Azealia Banks proclaimed on Twitter that she practiced “three years’ worth of brujería” (witchcraft) and tweeted, while cleaning the blood-smeared room used for her animal sacrifices, “Real witches do real things” (2016).

“Marina Abramovic’s performance piece “Spirit Cooking” (1996) was used in the infamous Pizzagate conspiracy theory of 2016 accusing Abramovic and the Hillary Clinton campaign of practicing witchcraft rituals and occult magic. Meanwhile, thousands of people coordinate binding spells against political leaders (#bindtrump) and Silvia Federici’s seminal book “Caliban and the Witch” moved from the bookshelf to the bedside table for many art professionals.” READ MORE

But do your own research, we have done ours and are satisfied that Marina Abramovic is exactly who we think she is, a New Age witch who hides behind performance art to promote Satanism, witchcraft, and all the rest of her demonic nonsense. So with that, let’s take a look at what Microsoft, the same company who is funding ID2020, is doing with Abramovic. Of course, me writing all these words are actually completely unnecessary, because when you watch the promotional video Microsoft has produced to promote her, it’s lights out and case closed.

Now if you have half a brain, after everything we present to you here, the last place you want to be is in a virtual world with a New Age witch known for satanism, gore and cannibalism. But this is where evil end times company Microsoft wants to take you, don’t go.

FROM MICROSOFT: Marina Abramovic is likely the most acclaimed performance artist living today. Known for risky performances that push the limits of human endurance, it’s difficult to overstate her importance within the art world and pop culture at large.

From the 1970s through to the present, she has created dozens of incredibly impactful works that explore themes of courage, ego, endurance, and spirituality. In 2010, her iconic work The Artist Is Present, was the biggest exhibition at New York City’s MoMA ever. In the piece, she sat still for eight hours, every day, for nearly three months, sustaining eye contact with whomever sat across from her.

“Any medium—visual, aural, even material—is really just a conduit for the energy of the artist to reach the understanding of the audience. In mixed reality we’ve achieved the first medium capable of presenting a recorded performance as an event happening now,” says Todd.

“The artist is forever, in this case, which changes the very nature of what the conduit means. But for the audience with The Life, it’s my hope that they never think about such things. Instead I want them to walk away feeling like they were just in the room with Marina.” 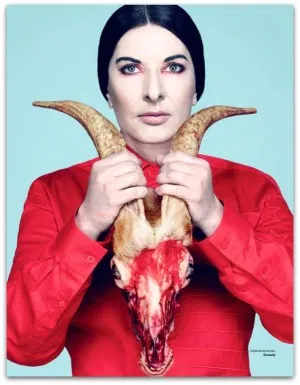 Ahh, the beauty of ‘performance art’

Marina’s most recent piece, The Life, further solidifies her unconventional and innovative approach to performance art—it’s her first artwork to harness mixed reality. Brought to life with the HoloLens 2, the 19-minute performance follows Abramović, whose phantom-like virtual image appears in a vibrant red dress as she explores the space and its borders. Viewers become mesmerized by her mindful movements, her virtual image dissolving as she interacts with the installation’s borders.

For the first time, viewers are able to experience performance art without boundaries—and without the artist technically being “present.” As soon as they don the HoloLens 2 headset, Abramović’s fully realized form takes shape before their eyes. READ MORE

If a picture says a thousand words, how many words is this video telling you? Watch and find out. But at the very least you will instantly see why we call her a New Age witch and a satanist, oops, sorry, performance artist.