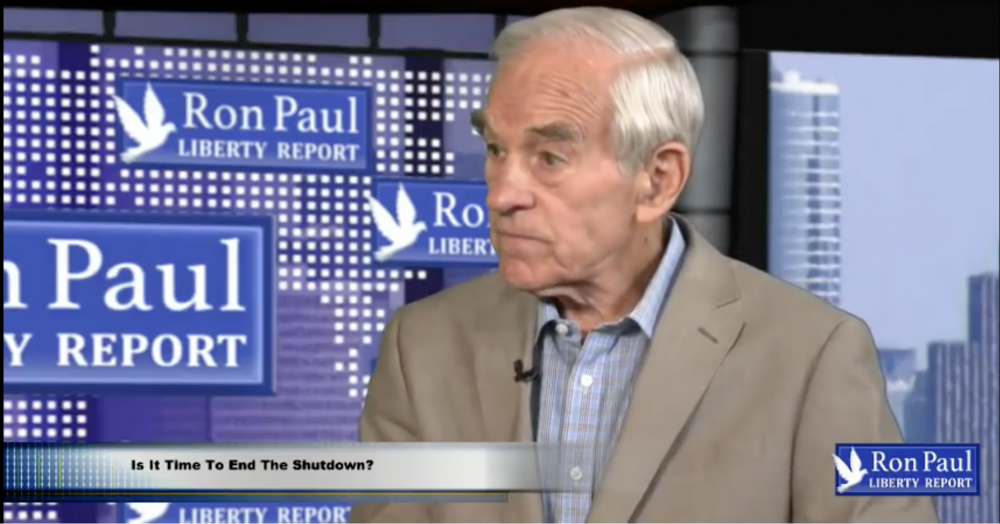 Ron Paul: Is It Time To End The Shutdown?

Yesterday the Mises Institute published a brilliant article titled “End the Shutdown” [which I have included below], making the point that continuing the “house arrest” of Americans and the shutdown of the economy will have much worse consequences than the coronavirus itself.

With the infection to fatality ratio at about the rate of the seasonal flu (as per a new Lancet study), is the continued destruction of American economic and social life worth it?

End the Shutdown
by MISES Institute

The shutdown of the American economy by government decree should end. The lasting and far-reaching harms caused by this authoritarian precedent far outweigh those caused by the COVID-19 virus.

The American people — individuals, families, businesses — must decide for themselves how and when to reopen society and return to their daily lives.

Neither the Trump administration nor Congress has the legal authority to shut down American life absent at least baseline due process.

As Judge Andrew Napolitano recently wrote, business closures, restrictions on assembly and movement, and quarantines are not constitutionally permissible under some magic “emergency” doctrine.

At a minimum, the federal government must show potential imminent harm by specific infected individuals at some form of hearing or trial.

These due process requirements are not suspended.

State and local officials may claim, or even possess, lawful police powers to shut down their communities.

We offer no analysis of such powers or claims under the myriad of state constitutions and authorizing legislation. But they should resist exercising these powers.

The governor of Virginia, in particular, deserves admonition for unilaterally imposing a lengthy period of virtual house arrest.

We do not know, and cannot yet know, how many Americans will become sick or die from the virus. We do know that predictions regarding infection and death rates are highly unreliable.

Even actual deaths attributable to COVID-19 are not so easy to count, as Italy has discovered.

Age, general health, and comorbidity are difficult variables to assess, and people may die “with” the virus but not “from” it.

It is also very difficult to assess the lethality of the virus relative to previously known types of flu and colds.

To date, COVID-19 deaths in the US are far fewer than deaths in ordinary flu seasons or from past pandemics such as the H1N1 virus.

This understanding is critically important to put the virus, and the government response to it, in perspective. Even during past pandemics, depressions, and world wars, Americans went to work.

In 1850, French economist Frédéric Bastiat helped the world understand the “seen and unseen costs” of state policies. It is simple to see how quarantines and lockdowns will slow the spread of COVID-19.

It is critical, but not so simple, to see the costs and harms caused by the economic shutdown.

Only then can we rationally understand the tradeoffs involved.

How many Americans suffering from other illnesses cannot see a doctor now? How many Americans will lose their jobs, their life savings, their retirement prospects, and their incalculable feeling of self-worth?

How many will succumb to depression, drug or alcohol abuse, and suicide? How many will lose their homes, divorce their spouses, or suffer abuse?

How many will never recover in their careers?

How many small businesses, including vital doctors, dentists, and veterinarians, will vanish from your community?

How many young people will “fail to launch”?

These questions are not rhetorical. All of these things happened, to a degree, following the Great Recession of 2008. They will happen again — very soon — if we fail to act immediately.

Tomorrow, on April 1, millions of Americans will not pay rent or mortgages. Millions of small businesses will shutter, just as many large employers such as Macy’s, Kohl’s, airlines, and hotels already have. Millions of service workers are unemployed already, but many more jobs will be lost. The effects will cascade.

There is no conflict between humanitarian and economic concerns; in fact they are flipsides of the same coin. A poorer America will be a much less healthy America, one more vulnerable to future illness and disease.

This local, bottom-up approach is the only effective way to confront the virus. The federal government, as we see now and have in the past, is comically incapable of competence in times of crisis.

On a fundamental level, freedom really is more important than security — or, in this case, an illusion of security.

We all demonstrate this in our personal lives every day, from flying to driving to riding bicycles, to consuming unhealthy food and drink simply because we like it. Security has never been the sole or even primary goal for a country born in rebellion.

Government cannot decide what aspects of our lives are essential or nonessential. The American people cannot simply sit at home and wait for government checks written on funds that government does not have.

Former Supreme Court Justice: ‘This is What a Police State is Like’ Previous post
Wikipedia Co-Founder Name Drops Trump, Clinton, Billy Boy in Rant About Child Sex Trafficking Next post